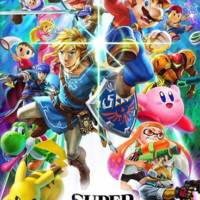 Super Smash Bros. is a slightly different fighter than your standard ones such as Tekken and Soul Calibur. For this reason, it focuses on scoring points by knocking your opponents out of the ring rather than the more traditional approach of reducing your enemies health to 0.

This makes Street Fighter much more like an FPS game of capture or controls the point. You need to stay on the map and not drop out rather than dealing the most damage through combos. Each character is given a percentage when a character is hit, the more the percentage increases the further the character will blast of the stage.

With this way of fighting you need to rack up the hits on a character and then send them flying using your ultimate attack the”Smash Attack”. Times matches end after a certain amount of time and the winner is the one who has the highest score when the time is up.

The score is worked out for your kills minus your deaths. So you get +1 for knocking someone off and -1 if you get knocked off. Characters who tie are then entered into sudden death with the first knockout deciding the winner. Whereas normal matches work on a number of lives, with the winner being much like a battle royale of the last man standing.

Each match type requires a different set of tactics and you might have characters which you choose for certain modes but in the end, the overall aim is the same. Knock others off and try to avoid being knocked off yourself. It’s not as easy as it sounds…

You’ll be given the choice at the beginning of 8 starting characters and can create your own Mii Fighters too. Unlocking more characters though you can do by reading our How to Unlock All THe character in Smash Bros Ultimate Guide.

Seen as the game is not your normal fighter then it makes sense the control scheme is not your usual button basher. Super Smash is a little more of a basic control set but used correctly can be a combination of complex strategies.

You can use two types of attack buttons, one being the standard attack and another the special attack. The same can be said for the movement controls where you can use the thumb sticks and combine the two and you can attack in that direction. Each one will perform a different move which makes things fairly approachable in terms of combos as all characters use the same move sets.

Another button is for guarding which is quite a standard in fighting games which will protect from attacks and if you guard and press the attack button at the same time you’ll then perform a grab attack. Like a lot of other fighting games, grabs/grapples cannot be blocked which can be useful to break someone else out of a guard.

You can change the controls in the menu at any time but here’s the list of default moves.