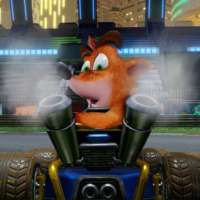 This is our unofficial guide for how to find the Golden Egg Tokens to unlock King Chicken as a playable racer in Crash Team Racing Nitro-Fueled. Each of the five eggs require you to refine your boosting and jumping skills to collect them in the hub worlds of the Adventure Mode.

Note: You must have the November 8th update, which includes the Neon Circus Grand Prix content in order to collect the Golden Eggs.

It is highly recommended to use characters that are blessed in the height department such as Tiny Tiger, or have an enhanced boosting ability such as Penta Penguin.

This Golden Egg is found near the pier that leads to the Roo’s Tubes warp portal.

This Golden Egg is found near the crystal stonehenge that serves as the race results podium.

This Golden Egg is found near the slope that you climb at the entrance of The Lost Ruins from Gem Stone Valley.

This Golden Egg is found in the corridor next to the Save Point at the entrance of Citadel Castle.

Once you have collected all five Golden Egg tokens, simply drive to the southern most point of The Lost Ruins to find a wall with five egg shaped holes and a chicken symbol. A cutscene will then play, and after it has finished, King Chicken will be unlocked as a playable racer for all game modes.