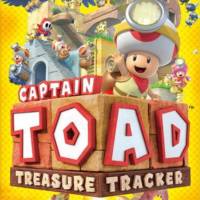 Episode 1 – Chapter 3: The Hunt for the Great Bird’s Lair

This is our unofficial guide for the third chapter of Episode 1 in Captain Toad Treasure Tracker. The Hunt for the Great Bird’s Lair is consisted of three levels filled with hidden Gems, Bonus Challenges and Pixel Toad pictures.

Gem 1: Go straight ahead to find a cave that is being protected by a Creeping Piranha Plant. Wait for the plant to pull away, so then you can walk into the cave to collect the first gem.

Gem 2: When you splash into the water, walk past the Creeping Piranha Plant and grab the second gem.

Gem 3: Go to a platform under the falling bridge to find a patch of grass that can be pulled up to find the third gem.

Pixel Toad: On the palm tree by the overturn boat, you will find the Pixel Toad standing by one of the coconuts.

Gem 1: Go through the Gold Pipe, and pluck the row of grass patches to find the first gem.

Gem 2: Go through the Blue Pipe and onto the collapsing bridge. When you land on the floor of the ocean, you will be able to walk to the second gem.

Gem 3: Go through the Red Pipe and past the enemies. Go into the water to grab the switch to raise the platform that will allow you to walk to the third gem on the upper floor.

Bonus Challenge: Grab the Golden Mushroom that is underneath the platform that is raised to reach the third gem.

Pixel Toad: On the box in the middle of the level. Use the Blue Pipe to reach the second floor, and pull up the switch to reveal the Pixel Toad.

Gem 1: Pull up the patch of grass on the east most point of the level to find the first gem.

Gem 2: Use the cannon to shoot the second gem that is floating in the top left corner of the level.

Gem 3: Go through the Purple Pipe at the beginning of the level, and pull up the moving grass patch to find the third gem.

Bonus Challenge: Use the cannon to use one shot to take out the grey brick. Grab the Power Star to complete the challenge.

Pixel Toad: In the cavity that is left when you have defeated the Creeping Piranha Plant at the leftmost point of the level.