Zombicide has been around for a while now after a very successful Kickstarter and the game takes on the role of up to 6 players battling against the undead as they try to complete objectives. One of the features to Zombicide is the number of expansions you can get to improve and extend the game. Zombicide Black Plague is one of these and changes things up by heading for the Fantasy setting back in the Middle-Ages.

The base game is not cheap and neither is Black Plague but a lot of attention and quality has gone into both products. From the player tokens, the player cards, the zombie tokens and map tiles. Everything has a lot of detail in the design but also care in the construction, nothing is cheap when you are playing either game.

That being said, not everyone is used to paying £70 for a board game, so new gamers might be put off by the cost. You should give it a chance though and read our review below and see what you think.

Much like the base game, Black Plague is a game about killing zombies and working as a team to hopefully survive. In this version of Zombicide, you play as wizards, dwarves, fighters and more fantasy based characters. Each with their own weapons, abilities, and uses in battle and exploring the 10 different missions that are available.

Luckily, if you have played the previous base version of the game a lot of the rules are the same and helps speed up the process of learning. Each mission is based on a set of modular map tiles that gives a good amount of diversity for each playthrough to feel different.

Zones are marked on each tile and players can use their action points to perform different actions like moving, searching for equipment, opening doors or trading equipment and swapping their weapons.

Black Plague acts the same in-game flow with it being a lot like cat and mouse. For every action you take once all the turns are over it is time for the zombies to have a go. They usually act in the same way, zombies act, they spawn and they move towards the noisiest point which can be generated by opening doors, casting fireballs or just having all the characters in one place as they also count as “noise tokens”.

Generation of zombies adds to the difficulty of the game and is also tied to a character’s level, unlike other games though working as a team is important. If one player levels too much then zombies get harder but only one character might be able to take them on.

Even when you open door zombies can spawn so it is important you share the XP. The grunt zombies only need one damage to kill but some need two or three and damage is not cumulative so stronger weapons, skills and teamwork is key. 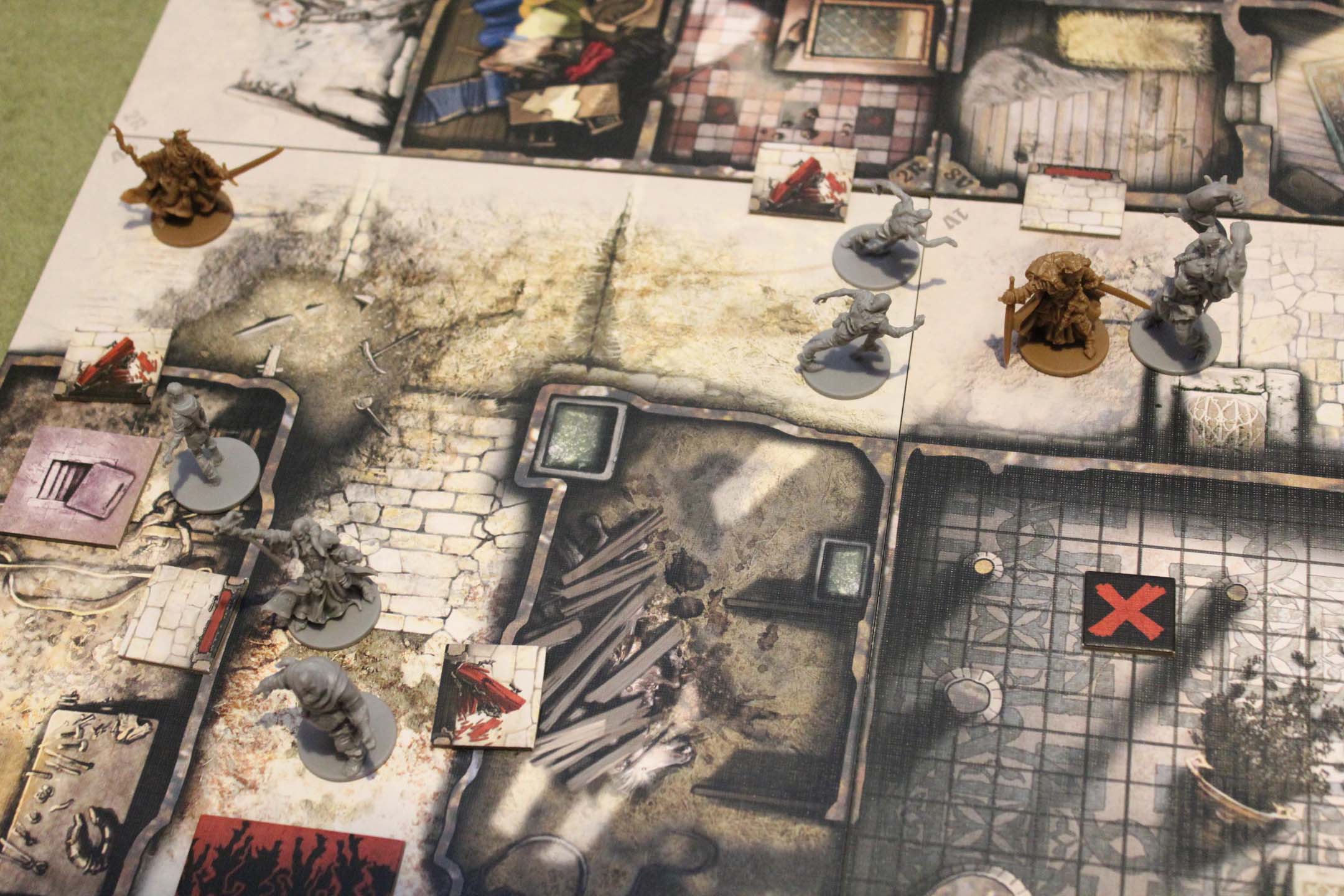 In Black Plague, you also have a troublesome Zombie much like the Abomination in the base game who was just hard to kill and a big damage dealer. The Necromancer in this version of the game tries instead not to attack you but escape and create more spawn zones for zombies.

This makes then a difficult enemy as you need to usually fight your way through a mass horde of zombies. This adds a different element to the game that the previous one does not, instead of focusing on surviving you need to try and kill it without getting killed by the newly spawning zombies.

As the game continues you begin to move away from just searching, to collecting the objective and leveling up. What starts off as a somewhat underwhelming adventure of a couple zombies can start to be a frantic episode of survival. This becomes much worse when you happen to get a Necromancer on the field.

So what are the differences to Zombicide: Black Plague vs the Original Zombicide?

Really the games are quite the same, which makes sense as it means jumping into it a lot easier but there have been some big enough changes to change up the style enough. First up was the Necromancer that was mentioned. Another change is most games only use six map tiles instead of nine making them smaller. Combine these two changes together the games get sped up and deadly much more quickly.

New character holders have also been created which allows for much easier tracking of your characters level, items and skills. These really are much better designed than the previous character stat sheet and accessories. 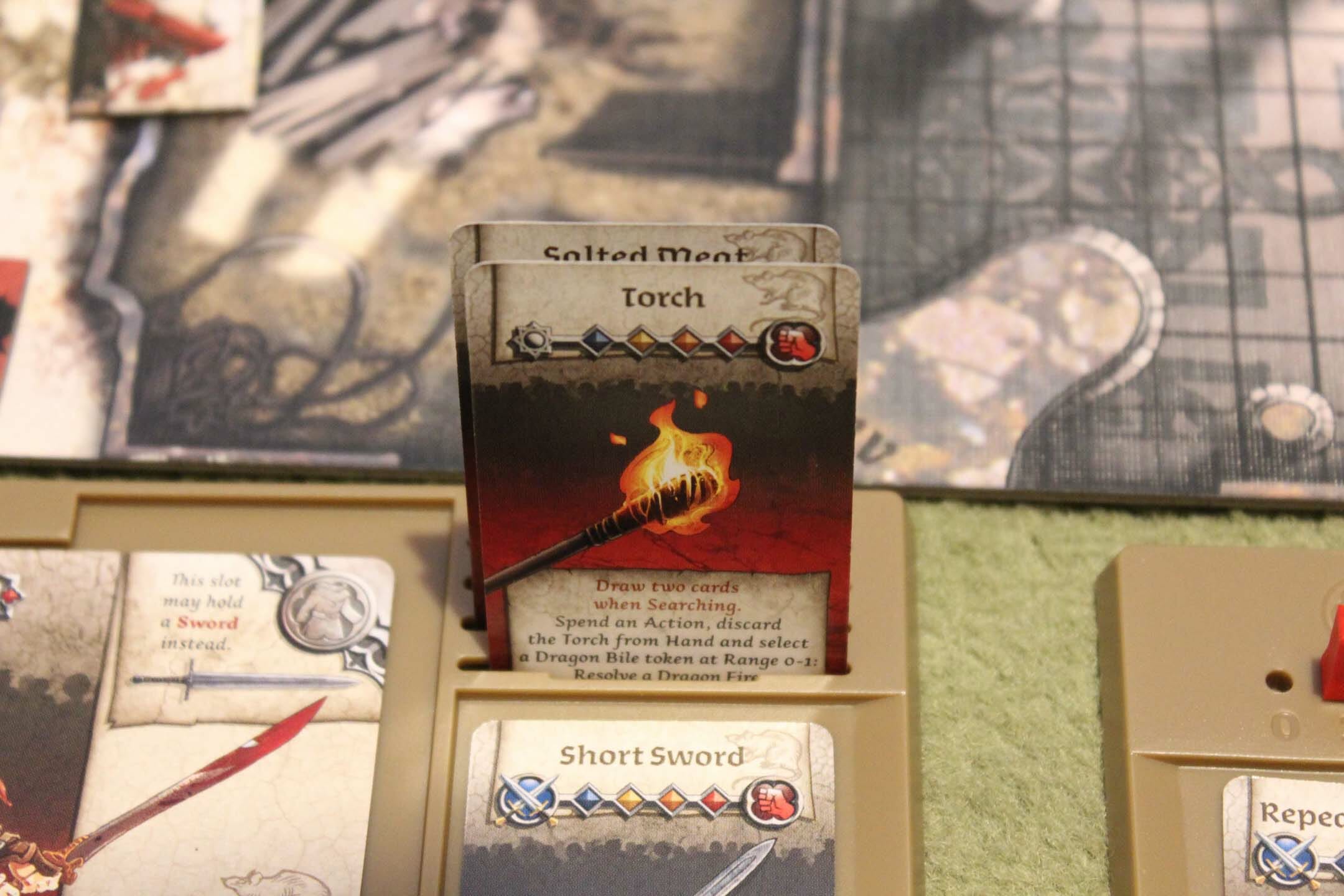 You can also hold an item in each hand rather than one, plus you get 5 inventory slots and an armour section. All these items are easily stored, easy to see and easy to use without much issue. I’d be happy if they brought up an upgradable one for Zombicide the original.

Other areas are the same but with thematic changes or minor ones, like Dragon Bile and a Torch make a medieval Molotov cocktail. The base zombies have had some slight changes with Fatties for example no longer spawning two walkers when they come into play. This does mean though they come up more often and so does the Abomination, meaning more stronger zombies in general on the field.

In the box the ten different missions are varied enough, the starting mission is to get you used to the game like the original but does not include the Necromancer. The first real mission is a kill and fetch quest, with players needing to kill an Abomination and Necromancer and taking all the objective tokens. Others include taking special artefact tokens and getting the danger level into the red. While some are purely about collecting resources and barricading yourself up.

Different missions can also have special rules to improve XP gain or not being able to perform certain actions until others have been completed. There is enough in each mission over the ten different ones to give yourself a lot of replayability. As the “Quests” are only usually size tiles, matches don’t seem to last as long which is quite nice to be about to try a couple different ones out in a single gaming session.

Combat is the same as the previous game where most of the combat is focused around rolling dice and letting luck to the rest. Of course, you can improve your odds based on your character and weapons. So most fights are about thinking about your chances, who and where you are and what you pick your fights with. The additional of armour does make things a little better to plan with some protection from the undead’s teeth.

Zombicide Black Plague is a good iteration of the game but my only gripe would be it is not fantasy specific enough. Most of it has just been textured to look like a fantasy medieval style game whereas the mechanics of the game are still the original game.

Characters can use most weapons even if you are a Wizard, Fighter or Elf. All can use spells and enchantments but it would have been nice if the Wizard had more spell based advantages over than just being able to use them straight from the backpack. The opposite could have been true, for example, a Human fighter could have only be allowed to use swords, nothing else.

The overall design is great, the cards and items have a very good design. The addition of the vaults was a brilliant idea that feels like you are dungeon crawling through an RPG for better gear. These special weapons also really help you to survive for longer, if you can clear the mission special rules to get access to them. The armour cards were also a great addition to the game, being able to use this type of equipment keeps your survivors alive but also feels more like a fantasy game.

With those points though, Zombicide Black Plague is still a fantastic Fantasy game and I can understand why they did not restrict the game too much as to not make it harder. The thematic change is welcomed and even though small changes have been made, the game does feel quite a bit different while still familiar to pick up and play.

You still need to concentrate on teamwork, or you can play solo if you like but with the Necromancer making an appearance, the game is more challenging than ever.

As a huge fan of high fantasy I liked the dive into Black Plague, with more expansions out there also improving the game like adding pets there is a lot of room for improvement on an already great franchise.

Zombicide Black Plague is a great addition to the franchise that is just a challenging and fun to play. The Medieval Fantasy setting was nice but it could have just done with a little more of it.