it’s time to duel! Sorry, had to be done. Anyway it seriously is time to duel, as Konami have released the latest Yu-Gi-Oh title, Legacy of the Duelist for Xbox One and PS4. Their last effort, Millenium duels had some solid mechanics but it was let down by a horrendous card unlocking system and DLC locks for most of the good cards. Have they learnt their lesson? Let’s find out.

The story mode see’s you play through 25 of the most memorable duels from Yu-Gi-Oh, GX, 5Ds and ZEXAL as various characters, usually whoever won the duel in the actual show. A few notable duels are missing but you’ll get a logical progression of the series events, with text-based dialogue explaining all that plot nonsense between the duels. Given that Konami owns Yu-Gi-Oh, I can’t figure out why they couldn’t use the audio from the show to dub over these segments, other than laziness.

In addition to the story mode, you can also unlock duelist challenges where you face off against characters from the show using decks that aren’t completely awful. Instead of his stupid Gate Blocker thing, Tetsu Trudge uses the Legendary Six Samurai for example. This adds a ton of playtime and presents you with some more challenging AI opponents to throw your custom built decks against. Finally there are tutorial duels which run you through the basic mechanics that are introduced in each series, such as Fusion and Synchro summoning. 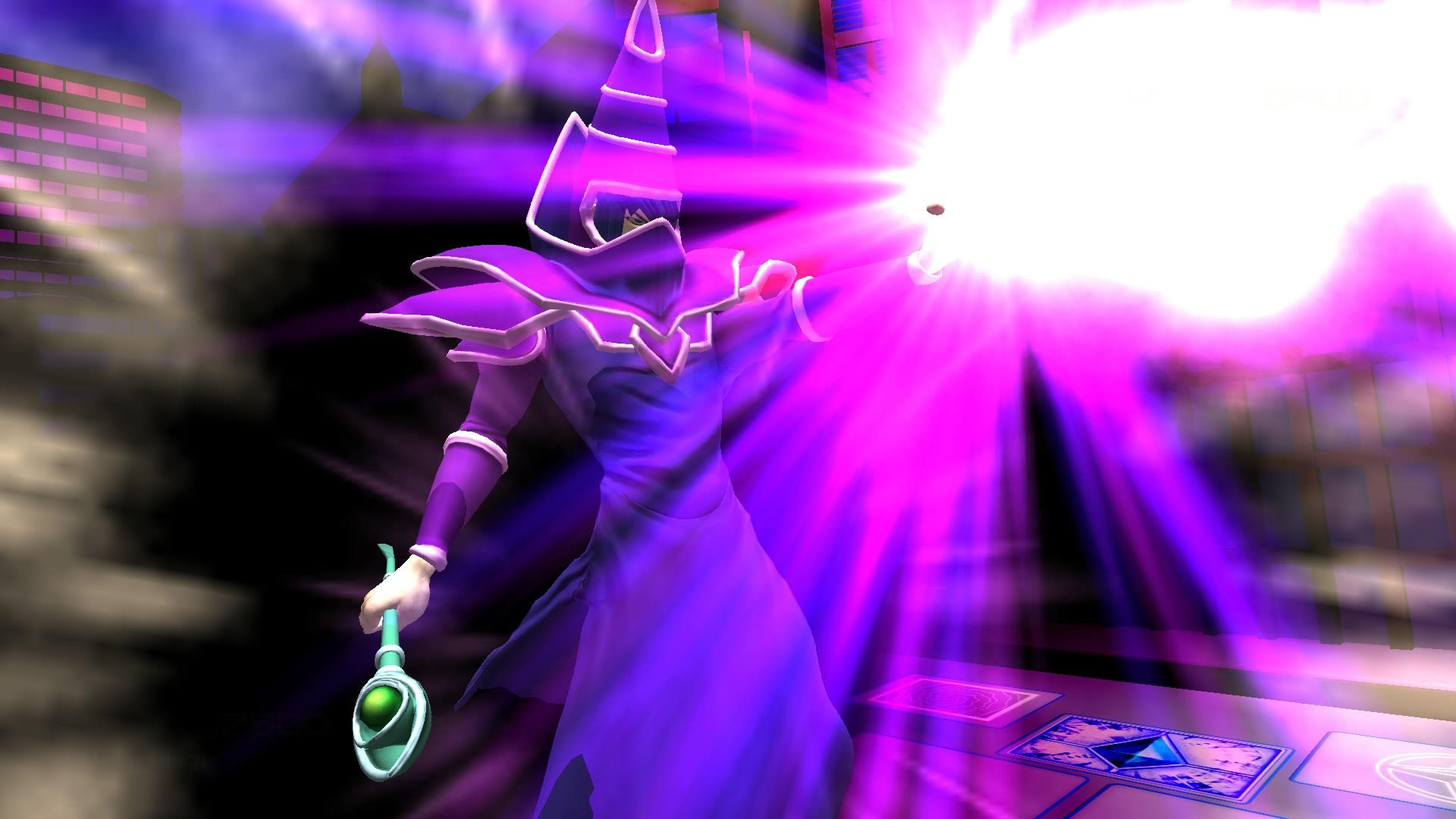 You can unlock new cards by two methods; defeating an opponent will give you three random cards from their deck and when you finish a duel, win or lose you will earn duel points based on your performance to spend on card packs. This system is infinitely better than that of Millennium Duels, which had you unlock 6-7 random cards from the entire pool of over 6000 cards when you won a duel, making it impossible to work towards a specific deck. Not a problem here though, you want Gravekeepers? Buy Kaiba packs or duel Odion. Looking for Pot of Duality? Grandpa packs have got you covered.

On the dueling mechanics front, it works like a treat, as it should given that it’s the exact same set-up as Millennium Duels with the addition of Pendulum summoning, the latest feature to grace the Yu-Gi-Oh series. There aren’t many Pendulum cards in the game though, with a lot of the latest releases being conspicuously absent so this new feature doesn’t reach it’s full potential.

One feature I will debase myself in gratitude for is the change to the multiplayer duels. In Millennium Duels, if your opponent rage quit because they were about to lose, the duel did not register as a win for you, making the win 15 ranked duels achievement into an absolute nightmare to attain. Thankfully this is no longer the case; if your opponent quits from the game, it counts as a win for you and a loss for them. The surrender option still lets you get out if you know you’ve lost rather than watching your opponent perform some unnecessary combo show boating at the end of the game too. 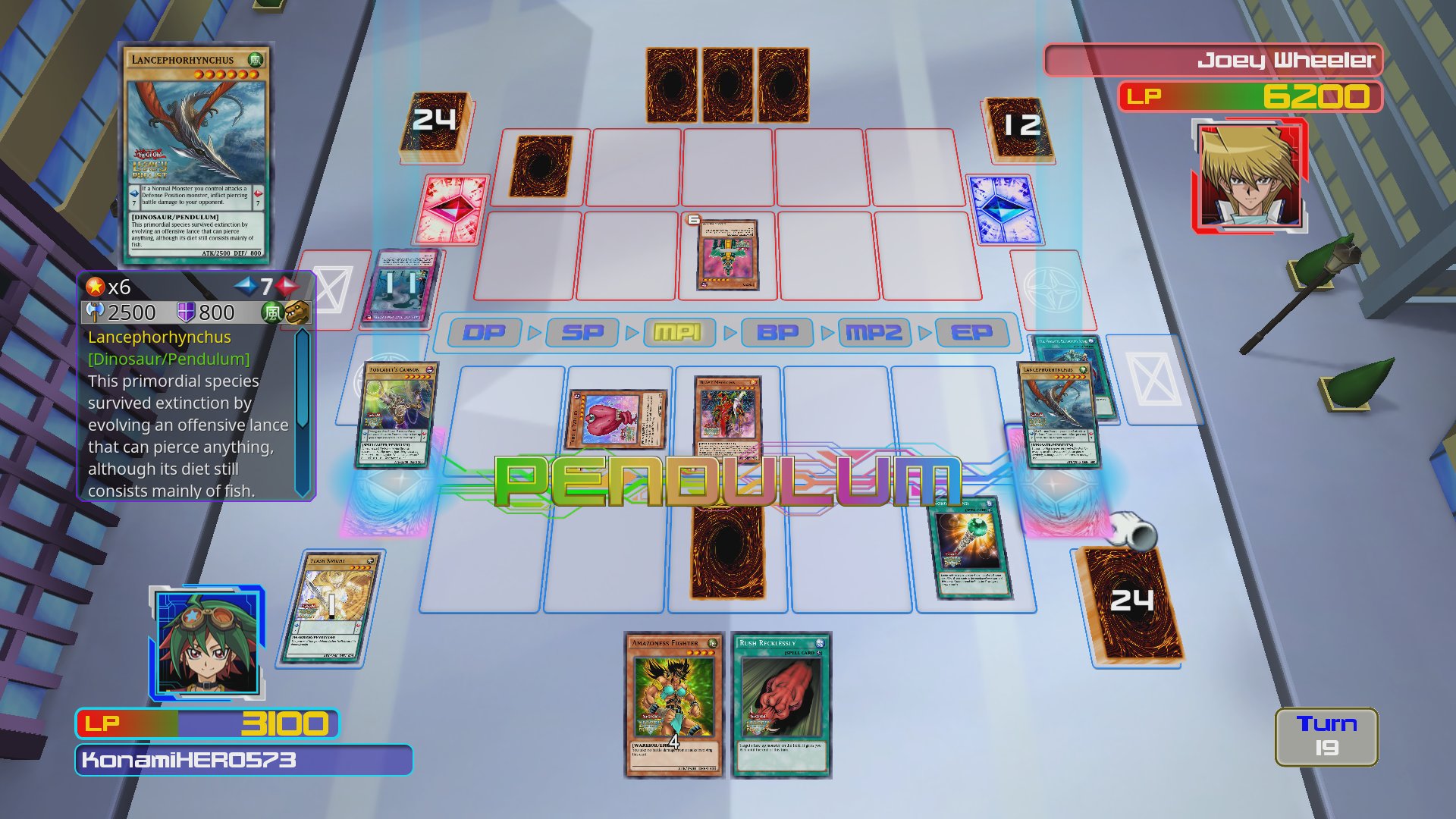 The animations for certain boss monsters are a nice touch, showing off a quick attack animation for the main characters signature cards like Yugi’s Dark Magician and Yusei’s Stardust Dragon. Unfortunately only a handful of monsters have been given this special treatment, and of those only one or two are monsters you’d ever use in a deck outside of playing with the Story decks. Given the staggering number of monster cards available, I wasn’t expecting all however many thousand of them to have a fancy attack animation, and truth be told it would get very tiresome if you had to sit through one every time you attacked with anything, but with that said a few more boss monsters on the roster wouldn’t have gone amiss.

A huge area of contention in previous Yu-Gi-Oh games has been the DLC locking of cards, whereby certain staple cares or those key to a particular deck are locked away behind a DLC pack which you’d have to buy; no amount of buying boosters and winning duels could get you these cards. I’m sad to say that this has returned, but to give Konami a sliver of credit, it is much less obscene this time around. Pretty much all of the staple cards are in the base game, and most of the deck archetypes are winnable from either beating specific duelists or buying packs. Several deck archetypes are DLC only though, like the Masked Heros.

As Yu-Gi-Oh games go, it’s certainly the best we’ve had to date. between the host of new features and a better card unlocking system, Legacy of the Duelist is certainly worth your time and money, though it’s not without its faults.

Legacy of the Duelist is the best Yu-Gi-Oh game we've had in ages, but its the little changes that made the difference...because there certainly haven't been any big changes here. The new cards unlocking system and challenge duels add a lot of replay to the game, but it still smacks of laziness. Why aren't the character's voiced when they are just saying lines they said in the show? Why bother to give monsters animations if you're only going to do about 10 of them? And why lock cards behind DLC in a game that is hardly cheap for what it is? Laziness and greed cost a good game from being a great one, but even with all my moaning, I have to recommend this to any Yu-Gi-Oh fans out there.

Filed under: Konami Other Ocean PS4 TCG Xbox One Yu-Gi-Oh! Legacy of the Duelist