Back in April 2015 Playtonic Games; a company made up of a rag-tag team of ex-Rare veterans created a Kickstarter campaign to accomplish one thing, to create a spiritual successor to the 1998 classic Banjo-Kazooie and to revive the classic platforming genre. Two years later, we are mere days away from the release of Playtonic’s first title Yooka-Laylee and from my time with the game, it is clear to see that Playtonic games have achieved their goal.

The Kickstarter was welcomed with overwhelming support, even though Playtonic Games only asked for a small sum of £175,000, by the time the campaign was over, they had raised more than £2 million to turn their small project into the fully-fledged release we have in today. This support is a sign that the return to the genre is needed, fans want it and Playtonic have aimed to deliver on just that.

Whether you play Yooka-Laylee for a few minutes or a few hours it is clear to see that it is a beautiful game and a love letter to a genre of gaming that has remained dormant and forgotten since the early 2000’s. By playing Yooka-Laylee it is clear why the collect-a-thon platformer reigned supreme for such a large part of the 90’s, the games never relied on the use of guns, cinematic sequences and motion capture technology. All that was needed was a plethora of collectibles and a cast of wonderful characters.

Which is why it may be a breath of fresh air, whether you have followed Playtonic’s work since the humble beginning of stellar Kickstarter success, or if you’re just tuning in now, Yooka-Laylee is the something old we need in the games industry right now.

The game is also beautifully presented, the graphics and art style are colourful and adorable, and some of the character designs feels like the successor to Banjo-Kazooie that we have all been waiting for since the closing minutes of Banjo-Tooie back in the 2000.

As well as developers returning to the genre, we also have Rare veteran composers returning to make the music feel as nostalgic as the presentation. Grant Kirkhope, composer of the Banjo-Kazooie soundtrack and David Wise of the Donkey Kong Country series manage to create a range of whimsical tunes that will stick in the minds of players for the following days.

The story of Yooka-Laylee is a simple one, but it works for the type of game being displayed. It starts with Yooka the chameleon and Laylee the bat relaxing by their home, using a magical book as a coaster, the book is stolen by a manic, capitalist business Bee who steals all the books in the world. It is up to Yooka and Laylee to get the lost pages from this magical book and to stop the evil Bee. Yes, I’m not joking, that is the story, Playtonic put this story forth in mere minutes of the games’ opening to ensure the player that this is not a serious game, it is simply meant to be enjoyed.

In order to progress through Hivory Towers (yes, this game is also full of puns, enjoy), Yooka and Laylee must collect items called , animated pages from their magical book. As they collect more they can unlock new worlds, and can expand already existing worlds. The expanding worlds mechanic is something new to the platformer genre. When you first enter a new game world, it gives you limited access to certain areas, meaning limiting the challenges you can do to get more Pagies. Once you have enough you can expand the world, opening up new areas and new challenges that were previously inaccessible. I rather liked the introduction of this feature as it meant each world had an additional layer to it and made the experience feel lengthier without it feeling like a drag.

Though this new mechanic is a welcome addition to this spiritual successor, expanding the world does create its own problems. Mainly it can interfere with actually find your way around worlds, making the worlds sometimes too big and easy to get lost in, perhaps a map would have been helpful. It’s not a game breaker, but can lead to frustration if you’re looking for a Pagie in particular. 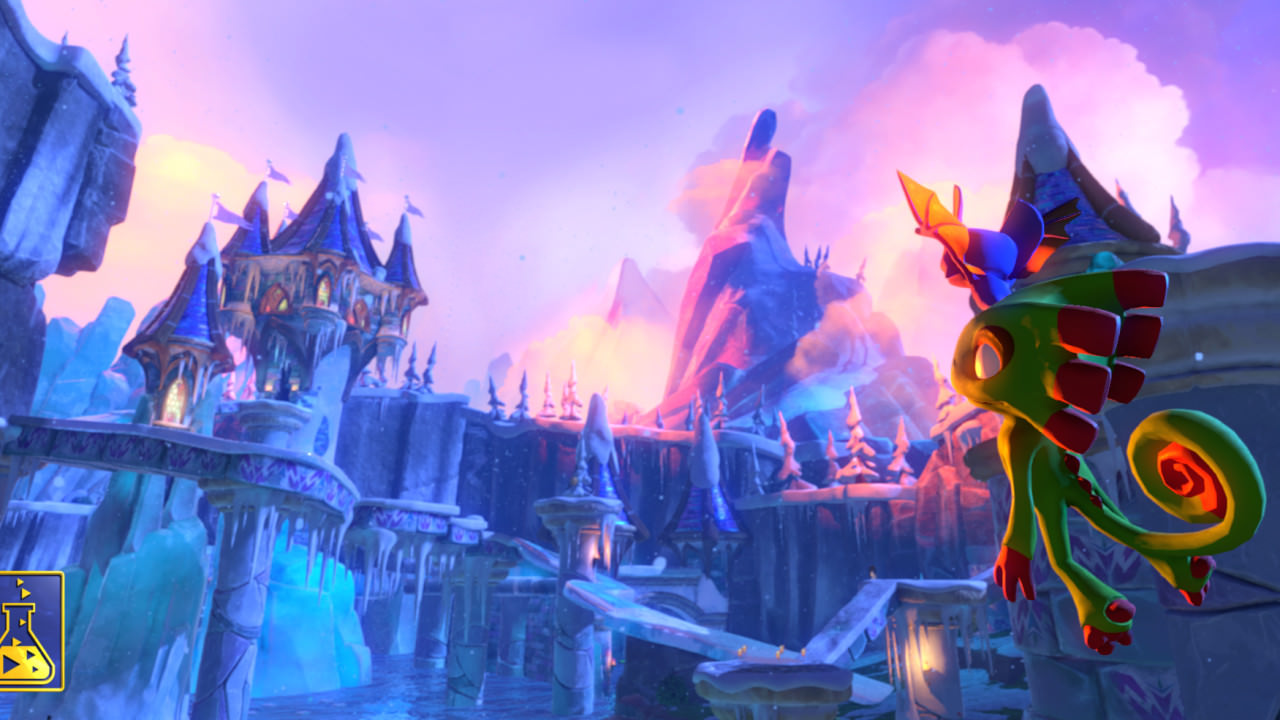 Variation is found in every new world, one minute I’m in a tribal jungle fighting natives, the next I’m in a frozen Disneyland-like castle and then in a Halloween themed swamp. Every turn in Yooka-Laylee makes it feel like a whole new game to explore and have fun in.

Lack of seriousness in Yooka-Laylee isn’t only shown in the premise, jokes are sprinkled throughout the game. Some being meta-jokes, characters breaking the fourth wall taking jabs at both the game you’re playing as well as making fun of the games industry as a whole. As well as this we have the dry wit we expect from a British development team, alongside a few jokes that the kids may not understand, but the adults will scoff at wondering how the developers got away with such a double entendre being in what is supposed to be a game for children.

The characters are also entertaining to interact with, one of the most helpful characters you will come across is a sly snake called Trowzers, whilst sporting a pair of brown trousers, he will teach you new abilities to access new areas in the world, abilities such as allowing Laylee to fly across long canyons, and Yooka using his chameleon tail to bounce him up to higher ground. Trowzers also makes noises like a disgruntled member of the three stooges and that is always welcome for comedic effect.

Though I can honestly say Yooka-Laylee is not really a game for children. Yes, the themes of the game, and the bright colours are definitely inviting for children, but Playtonic have made this a game easy to play but incredibly difficult to master. Some challenges will feel like a bit of a breeze but with each new world you enter, the challenges get tougher, more complex and sometimes feel downright frustrating to complete, but upon completion the reward of a Pagie and the feeling of progress is more than worth it.

Yooka-Laylee is everything fans were hoping for and more, it is pure childhood fun that we seemed to have left behind in the 90’s but reformed for the modern era. Fans of nostalgia and newcomers will both take to this title and enjoy it for what it is, a bit of harmless fun.

A solid 90’s nostalgic hit of platforming, Yooka-Laylee reminds us why we need to embrace the platformer genre in the modern day and embrace fun.

Yooka-Laylee And The Impossible Lair Review
Powered by Magic