X-COM Enemy Within is a throwback to expansion packs, before the days of DLC. Nowadays a few new maps or a couple of new story missions is all a company needs to put out to rinse you of your hard earned cash. But back in the old days, before a sweet internet connection in every home was as commonplace as it is now, developers had to release extra content as an expansion pack. These retail releases cost less than a regular game sure, but they still had to turn up with a damn sight more than a couple of maps if they expected to part you of your hard earned cash. X-COM Enemy Within brought more…a lot more.

Where to start? Well you can now convert your soldiers into either a genetic super soldier or mechanical warrior using two new laboratories: the Genetics Lab and the Cybernetics Lab. The genetic modifications include muscle upgrades that allow your operatives to leap tall buildings in a single bound, or even go Doctor Who Style with a second heart which causes your soldier to be critically wounded rather than killed the first time they go down in a fight.

Not into that GM nonsense? Always wanted to get a pair of robot arms and sunglasses implanted directly into your face? Well then X-COM has you covered too with the addition of MEC soldiers. The soldier’s entire body is replaced by a mechanical version, turning him into a massive hulk of metal and death. MEC soldiers are incredibly powerful; armed with miniguns as standard, they can be upgraded with fusion cannons, grenade launchers and even rocket powered fists. Yes you heard me…rocket powered fists. The downside to being built like an Autobot is that your guy becomes somewhat more conspicuous on the battlefield, so he’ll be attracting a lot of enemy firepower. 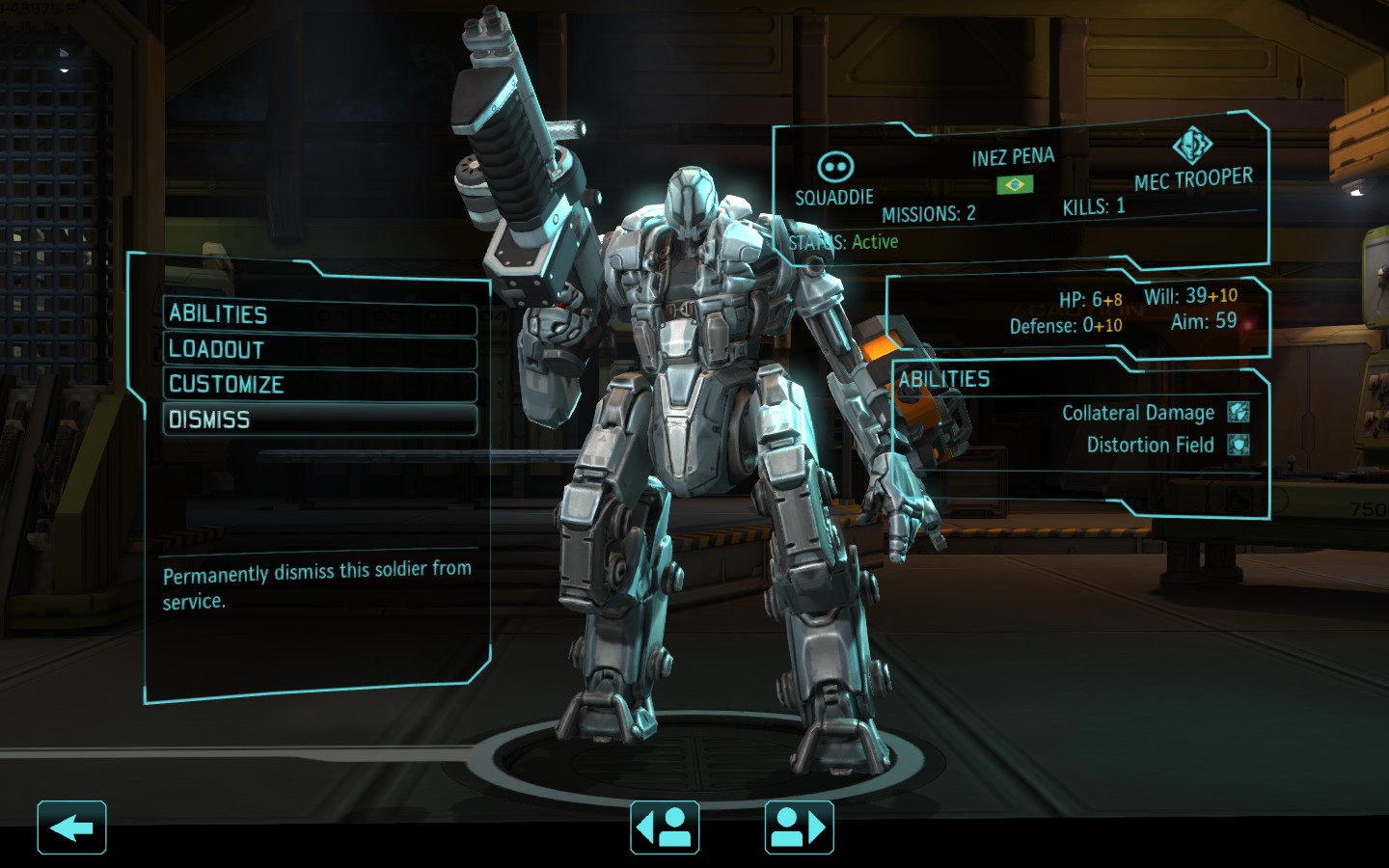 If you want to make yourself some super-human soldiers though, you’re going to need the new resource that Enemy Within adds, a mysterious substance called MELD. MELD is found scattered throughout the map during alien encounters, but here’s the twist. Each canister has a countdown clock tied to it, and if you don’t snag the canister in time it explodes. This forces you out of your comfort zone as you have balance the risks between advancing too quickly and losing the MELD. This extra nuance to the gameplay really spices things up. Finally, Firaxis have rebalanced a lot of the squad promotions to make them more competitive.

Not a big fan of transhumanism? Do you remember the days when wars were won with soldiers and determination, not gene mods and robots? Well then X-COM caters to you too, allowing you to upgrade your soldiers by awarding them service medals. Each medal has one of two perks attached to it, though once you choose one all medals of that type must offer that same perk. There are six medals to be unlocked, all of which can also thankfully be renamed, hence why my Colonel is currently wearing the Medal of Awesome. Medals are unlocked during missions and can be assigned to any soldier you like, creating the interesting dilemma; Do you pile them onto a few super soldiers but risk losing them all, or spread them out amongst the troops to soften the blow of being a man down?

The X-COM chaps don’t get all the new toys with this expansion though, as the aliens have themselves a few new units to throw into the fray. Firstly there is the Seeker. Essentially a floating mechanical squid, the Seeker’s job is to pick off isolated X-COM agents and hit their weak spot for massive damage. They have a few tricks up their sleeves to this end. For one thing, they can turn invisible, allowing them to sneak up on unsuspecting opponents. Once they’re within striking distance they can use a special strangle attack, which damages and incapacitates the targeted soldier. Much like the Smoker in Left 4 Dead, your entangled agent will require a team mate to damage the Seeker before it will let go. The other new enemy is the Mechtoid, a little Sectoid dude strapped into a big old mech walker. Pretty dangerous on its own, the Mechtoid becomes a real beast when another Sectoid psychically links with it to project a force field around it. The new enemies are both welcome additions, but it would have been nice to see one or two more new faces in the extra-terrestrial line up. 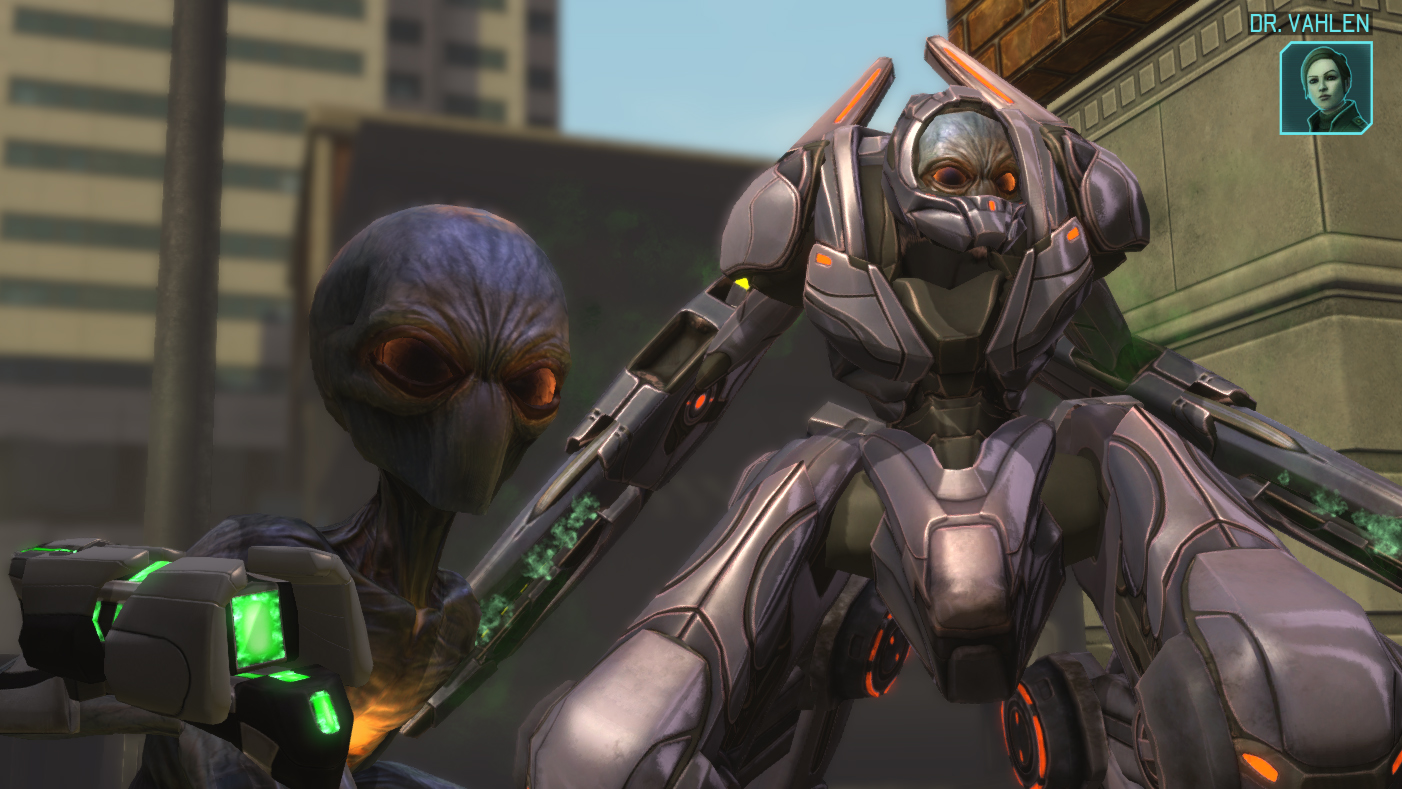 Bored of shooting aliens? Want to bring some high-tech weaponry down on your fellow man instead? Well then you’re in luck, because Enemy Within is all about the enemy within, a human faction called EXALT. Think Cerberus from Mass Effect but without Martin Sheen running the show (sadly) and with a similar level of technology to X-COM. EXALT are up to no good trying to secure alien technology for their own nefarious purposes, whilst simultaneously throwing spanners into X-COM’s works so you’d do well not to ignore them. To track down EXALT and put an end to their interference, you need to send an agent on a covert operation to steal intel. Once they’ve stolen the intel, you’ll then need to perform a special extraction mission to safely pull them out, fighting off waves of EXALT agents whilst your operative secures the intel before pulling out. These missions give you clues as to the location of EXALT’s main base. Once you’ve figured out where they are hiding, you can launch an assault and give them what for. This new factor adds more depth to the experience, as you have to balance resources between the fight with EXALT and the alien menace.

A lot of new toys then, but what’s the point in having an arsenal to shame the Galactic Empire if you have nowhere cool to show it off? Enemy Within adds 47 new maps as well as offering tweaked versions of older maps with new spawn points which drastically alter how you can tackle a mission. There are also a host of new missions including some which connect together to form a sub-plot, much like the Slingshot DLC missions. There are a couple of standout missions, one of which takes place in an abandoned fishing town which provided some of the most tense X-COM gameplay I’ve experienced to date. Another mission, set a little closer to home, crops up later in the game which I won’t spoil for you, but trust me, you’ll love it.

Enemy Within adds a metric ton of new content and it should be congratulated for that, but it’s not without its issues sadly. X-COM has been given some seriously dangerous new toys to play with, but the aliens and EXALT haven’t stepped up their game accordingly. This means that by the time you get Plasma weapons, it’s pretty much game, set and match. This can be countered by cranking up the difficulty or sticking the game on Ironman Mode, but it would have been nice to see our enemies pulling out a few more surprises to keep themselves competitive in the late game.

Overall though X-COM Enemy Within is an absolutely stellar expansion to the already acclaimed Enemy Unknown and should not be missed. Adding a ton of new content and really mixing up the standard X-COM formula, a game of Enemy Within feels like a totally different beast to Enemy Unknown, building on the already great foundation and then adding in a huge variety of new options to keep things fresh.