The Worms series by Team 17 has been ever present in gaming hive-mind since the original release in 1995. Slowly adding new weapons and mechanics, the series has slowly evolved the simple little creatures into one man armies. Does Worms: Revolution’s introduction of dynamic physics and classes take the next big leap into the future or is it still playing in the mud?

Narrated by British comedian Matt Berry, the campaign plays over 4 series of 8 missions in various themed location. Totaling 36 missions each area ends with a boss “fight”,which serves as a culmination of the lessons learnt throughout the levels prior. The challenge ramps up quickly with matches pitting you against groups of worms that outrank you in terms of health and equipment. A.I flits between master strategist and bumbling moron, one turn perfectly lobbing a grenade between two worms and the next killing itself with a bazooka. These attempts at making the A.I seem more human instead make it much more apparent when it is deciding to give you an easier time. A long with puzzle challenges they primarily serve as a prolonged tutorial to the new features and isn’t Worms: Revolution’s main strength.

Being dubbed Worms: Revolution two new major features change how games progress. The first lets you choose the new types of worm you can use in your party from four classes; Heavy, Scientist, Scout and Soldier. Each type of worm has their own properties, such as Heavies who can take more damage or scientists that award 5 extra health to each member of the party every time they have a turn. It adds a new layer of forethought that previous worm games lacked as you find your own group of worms that suits your play style.

The newly implemented dynamic physics object consists of items you would typically find discarded in the terrain, on the beach environment for example there are discarded water bottles and lighters which can be cracked open to flood an area or explode respectively. Coming in the flavours of water, fire of poison, these objects can be used to turn the side of a match with a well-placed show. Water adds another dangerous element to the carnage as any worm left underwater slowly drowns, taking 5 damage per-turn.. The use of the new weapons or the destruction of a key object can leave your adversaries swept away under a watery current off a cliff, or burning to a crisp. Along with the terrain deformation and destruction, it gives maps another layer of interaction. A nice clean map can end with holes, large lakes and scorch marks.

Worms: Revolution’s graphics impart a large amount of charm but do nothing to push the envelope. Maps are well detailed if simplistic, but comical Worms are the highlight, making quips and retorts whenever you fling them to their doom. With a modest amount of customization options worms still find a way of being consistently amusing. 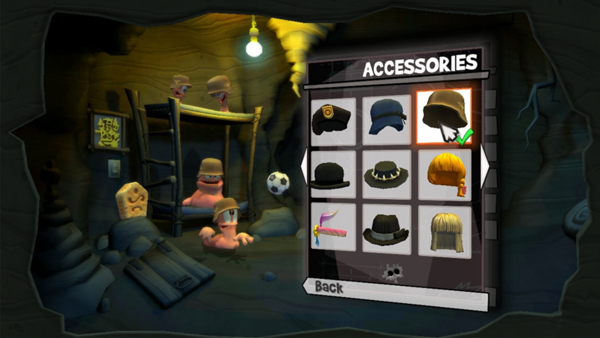 Yes, It Is Possible To Make Hitler Worms

Multiplayer consists of various settings as you would typically expect with a few new parts thrown into the mix. New match types include Classic mode, which essentially strips out the newer features with no frilly bits attached and Forts mode which has two large structures wage war overa stretch of water. Usually falling into a game of slow attrition it is a worthy addition, if a bit slow as you near the end of the match. The staple deathmatch mode is the main attraction though, with map customization easy and intuitive with you able to control how much an element is present on a map. Don’t want much water but want a load of physics objects, no problem just hit the correlating icons. This level of simplicity carries over to the map creator where you can create your own plain of destruction.

All-in-all Worms Revolution is very entertaining, hours of fun and indeed a great way to settle disputes about the house. Worms: Revolution deserves the time of day for anyone who wants a strategy game with a distinctly British sense of humour. Held back by poor A.I and boring single-player, Worms: Revolution is best when played with friends. If the single-player was given the same care and attention the multiplayer modes got it would be a real contender for the best game in the series. Instead it is just a very good one.