Reviewing narrative heavy games is always difficult; trying to strike the balance between criticising the ‘game’ aspect of a title as well as the narrative and world that is presented to you. As such, visual novels and the like usually stay off my radar as pieces end up sounding like a book report rather than a review. However, VA-11 HALL-A was able to break this trend, due to its initial promise of ‘cyberpunk bartending action’ and its endearing cast of androids, bounty hunters and talking corgis. After playing through the main story and mixing a few more drinks, VA-11 HALL-A has turned out to be one of the most personally polarising games I’ve played in a long time.

In describing the core mechanic of VA-11 HALL-A, many (including myself) have likened the act of serving drinks in to stamping passports in Papers, Please. Both games have players having to parse through large databases in order to make the correct decisions, whether that is making sure a potential terrorist doesn’t make it over the border or making the perfect cocktail for the private eye who just walked in. This comparison does quickly fall apart though, as VA-11 HALL-A’s mixology lacks any of the pressure that Papers, Please was able to pack into its equally simplistic passport stamping system. Upon talking with the latest patron in the bar, players will have to mix the correct drink to suit their tastes, by searching through the drinks database for the perfect poison. Most of the time, clients will tell you exactly the drink they want but some can be more cryptic, asking for a certain flavour or requesting an alcohol free variant of a cocktail. During this period, wannabe bartenders can take as long as they wish when creating the perfect Sugar Rush, there is no time limit which puts players under pressure to serve on time. If you add too much Powered Delta or forget to make a drink on the rocks, there’s no problem as you can just reset the order and start again. As such, there is no feeling of tension to engage you in the act of drinks making, it’s just there really to break up conversation and give the player something to do between bouts of dialogue. You can mess up orders or freestyle with someone’s drinks request to possibly change the outcome of a meeting or make more money off tips but in actuality, you’ll want to be making the correct orders each time as messing up has no positive benefit.

Making a flawless drinks run gives the player more cash, which allows the player character Jill to keep a roof over her head, as well as to buy toys and furniture to stop her getting distracted at work. Also, in order to get the special endings for certain characters you meet during your time as a bartender, you must get their orders right every time, meaning there is no incentive to really mess about as it could be the mistake which costs you that ending you’ve been working so hard towards. Most of your cash goes towards paying for random crap in Jill’s apartment anyway, in order for her to not forget that she works in a bar, which seems problematic at best and a crappy mechanic at worst. There are no times where you have to remember the ingredients for a drink without use of the all-encompassing database, so the whole drink mixing system is purely padding.

So, looking at it from a purely mechanical perspective, VA-11 HALL-A sounds like it’s just out to waste your time with a system which lacks any tension and seemingly lies to the player in order to give the illusion of choice. However, as you slowly become immersed in the world of Glitch City and the mind of the main character Jill, the tedium of mixing drinks starts to make some sense. You are essentially working a dead-end job in a crappy bar in a crappy part of town; the actual job itself is meant to be boring while talking to your customers is what you really want to be doing to keep your mind off things. It’s a risky gamble to take but if the first few patrons you serve succeed in drawing you into VA-11 HALL-A’s world, you’ll gladly go along with this conceit. Unfortunately, the pacing during the first few encounters is way too slow and many will have already given up before they start to bond with some of the more interesting regulars of this dive bar. 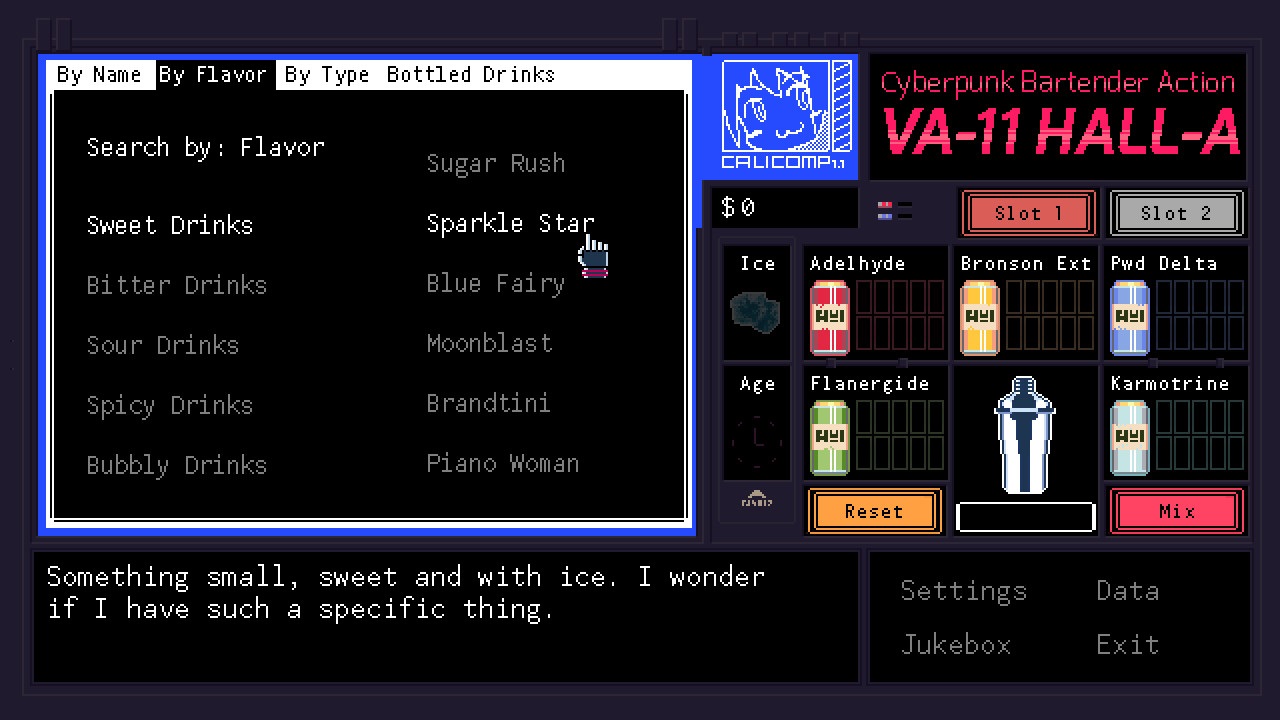 You’ll eventually have the drinks list committed to memory after a few days at the bar.

The cast of VA-11 HALL-A sports a strong female cast, ranging from an android sex worker who looks like an underage girl, a member of Glitch City’s heavily armoured first responder unit, a rich heiress cat girl and a well-endowed master hacker. Each of these women has an engaging backstory with Dorothy the android being one of the most human depictions of sex work I’ve ever seen in a game. Reading their stories about living in Glitch City is what will make or break your time with VA-11 HALL-A as getting to these vignettes requires players to withstand the same conversational structure each day. Most conversations are structured to have big exposition dumps, usually detailing some bit of lore about the larger workings of Glitch City which would probably be common knowledge to Jill the bartender, some moral dilemma which the characters debate before getting to just general chat. It’s these end discussions which are the best written, starting off as idle chitchat before evolving into heart to hearts between close friends. These chats do lengthen as the days wear on, depending on if you make the correct drinks and you’ll probably find it difficult to choose between which ending you want, as the regulars to the bar are people you’d like to have stick around.

The world outside of the bar does seem like a great cyberpunk city but it only really exists through the conduit of endless exposition. It’s all tell and never show in VA-11 HALL-A, as you are stuck in the single camera angle of the player either looking at the people at the bar or the drinks database. There is one interactable on the screen, that being the TV in the back of the bar but you can only switch between channels which show a single repeating animation. If news flashes appeared in the background or people walked past a window outside of the bar, it would make the world outside of the bar more tangible. You can check your phone before the start of each work day to read in-universe message boards and newspapers but again, this is yet more world building guff to wade through.

VA-11 HALL-A is perfect if you are looking for a world to escape into, a place where rather than being the hero, you are simply a friendly background character that helps people live from day to day. It’s an incredibly relaxing game, helped by the belter of a soundtrack which has a whole host of great tunes to accompany your nightshift. At the start of each day’s service, you create your own playlist from the bar’s jukebox, creating your own little routine of picking your favourite songs and occasionally adding in a new one to mix the monotony up a bit. You quickly get into a rhythm with VA-11 HALL-A, watching the door for your favourite regular to come and waiting to hear about their day.

Comfortable is the word that unpins the experience of playing VA-11 HALL-A; it’s like slipping into your favourite pair of pyjamas, making some hot chocolate and settling down to talk to your best friends. Don’t expect anything super challenging while playing and you will become bored very quickly if you can’t stomach clunky exposition and dull drinks making, but for a world to immerse yourself in, it’s one of the best.

Working a bar job in a rundown cyberpunk dystopia is actually one of the most relaxing things I've done this year. Great for cyberpunk and visual novel fans, but it may not win people over to the genre.