Until Dawn. Is it scary, or is it another bargain bin teen slasher movie which fails to impress? The premise of Until Dawn is not new to the story making scene, but that is the point. Eight teenagers head their way back up to a cabin in the mountains after their friend Josh ask as a sort of closure for the disappearance of this two sisters Beth and Hannah one year before.

As seen in the slasher formula in movies, the teens see themselves isolated away on a snowy mountain accessible only by cablecar from their parents and the rest of civilisation, ready to party, get drunk and “dance”.  Before long however, things take a turn for the worse once the group realise they are being stalked by a madman.

Each part of the story is broken down into chapters, and between each chapter you are visited by a mysterious psychiatrist whom asks you a series of questions to see what you are more frightened off. These choices you make such as rats or snakes, knifes or needles, scarecrows of zombies allows the game to change what will be coming at you in an attempt to scare you further. At the time of playing, it was not really noticeable that the choices made that much of an impact, but it was quite obvious that the choices would affect the game. which did not play into the overall theme of subtlety the game had to offer from each tiny choice the other players made. 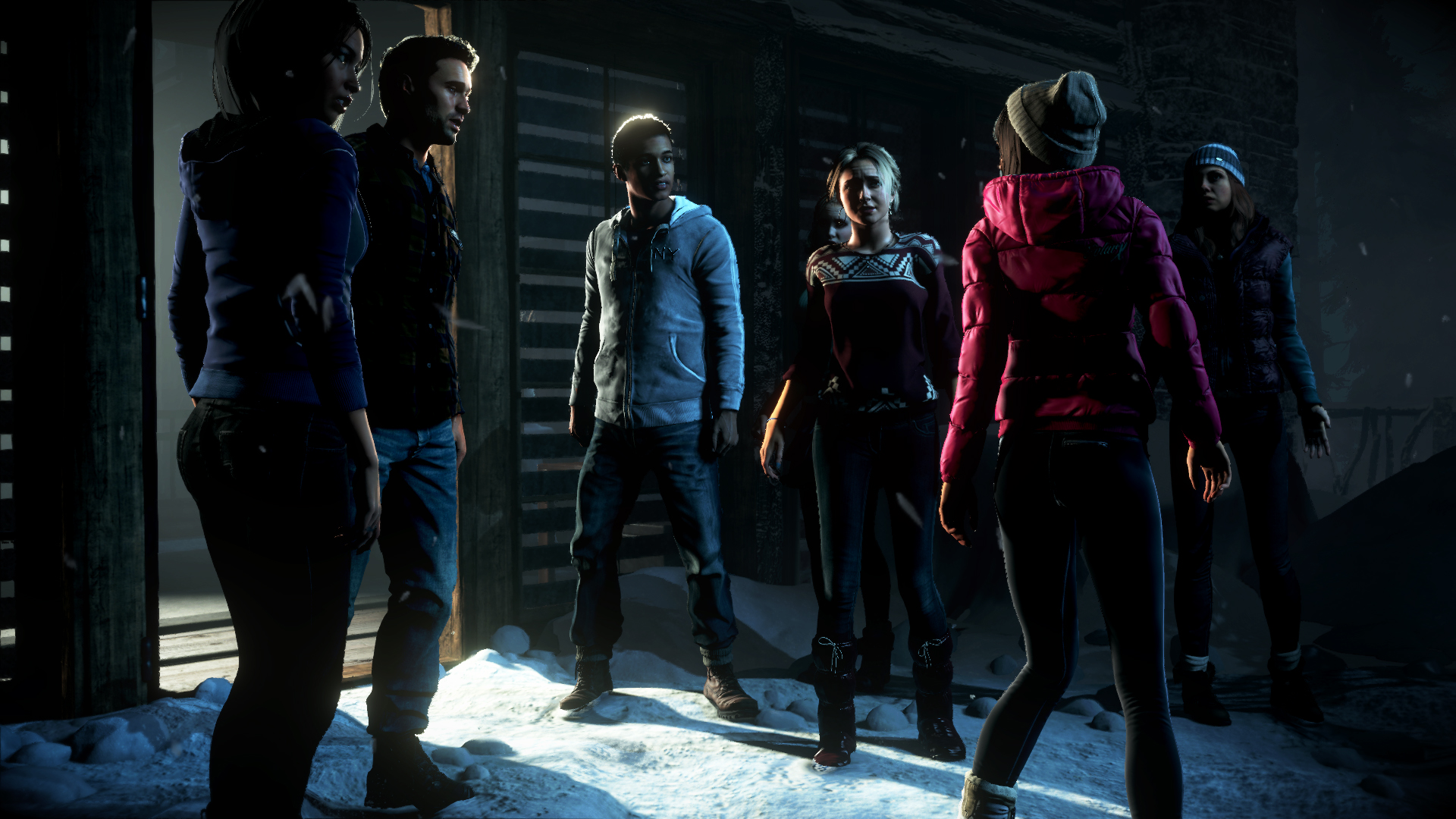 This further distils the choices you will have to make in the game. Until Dawn’s major feature in the game is the butterfly effect, in that all choices are deep routed and each choice you make can have an impact later on in the game. Be it moments later or in other chapters also effecting the interpersonal relationships between characters, and how they continue to change and adapt in the later stages of the game.

Making these choices is a difficult one, more so when some are timed only leaving you a matter of seconds to decide whether to run or hide. With so many different choices, the multi-layered progression of the game become enormous, even with just a couple options each time. The path in the players destiny spilt over and over allowing for different scenes, different dialogue and different outcomes.  This can affect how each of the characters interact with one another, to the point where you can cause arguments and snideness between couples, or make best friends question their relationship.

Until Dawn allows players to easily see how and when their choices have made an impact. If a big choice is the made the screen will be filled with a flurry of butterflies, making it clear that a fork in the story has been created. Using the menu you can also see the number of choices you are going to have to make, with each one has a little clue on what the outcome could be and effect the future. Each choice is permanent, the automatic save feature is quite forceful and it further forces the player into a state of tension and panic each time the game slows to present the next action they must take.  This makes each choice you have to make feel much more weighted and more important, which is nice when compared to other games which throw arbitrary choices which mean nothing.

The more that I played the game, the more I could see how intricate the choices were becoming and how it was affecting the storyline, the characters and the world around me. Even after playing through each episode a couple of times, it was more and more interesting to be able to uncover different clues and learn more about the different stories that are unfolding in Until Dawn are connected.

Ashley and Chris were my favourite dynamic duo, with great chemistry and back story with their own 'too scared to ask each other out' relationship.

Each character in Until Dawn are modelled and voiced by their real world counterpart. Not only is the facial motion capture one of the best the games industry has seen so far, but the voice acting is top notch. There are some familiar faces, with the likes of Hayden Panettiere from Heroes, Peter Stormare from Prison Break and Rami Malek from Night at the Museum as part of the cast. Each actor in the game are able to bring their characters to life. This further brings more emotion and humanity to the game, making each choice even harder.

As the game progresses, I found my self liking some quicker than others and even wanting one or two to die early on, waiting for the right choice or the wrong one which would make my version of the game come true. Boy was I disappointed when I thought I was making the right choice, which ended in Ashley, one of my favourite characters dying a pretty gruesome death. Feeling like I had lost a friend myself, I continued on remembering that I should not whisk through the game and take choices lightly. It made me realise that Supermassive Games put a lot of thought and care into their butterfly system, even for people who think they can manipulate it completely.

Exploring the environment and uncovering clues is one of a few things you can do in the environment, and interacting with anything in the world shows up as a little glisten. The interaction is limited and this could be seen as downfall of the game and partly it is, the game can feel quite linear when your path is so forward, straight and limited. With a game that makes you feels so free in ways also has a stifle on exploration. 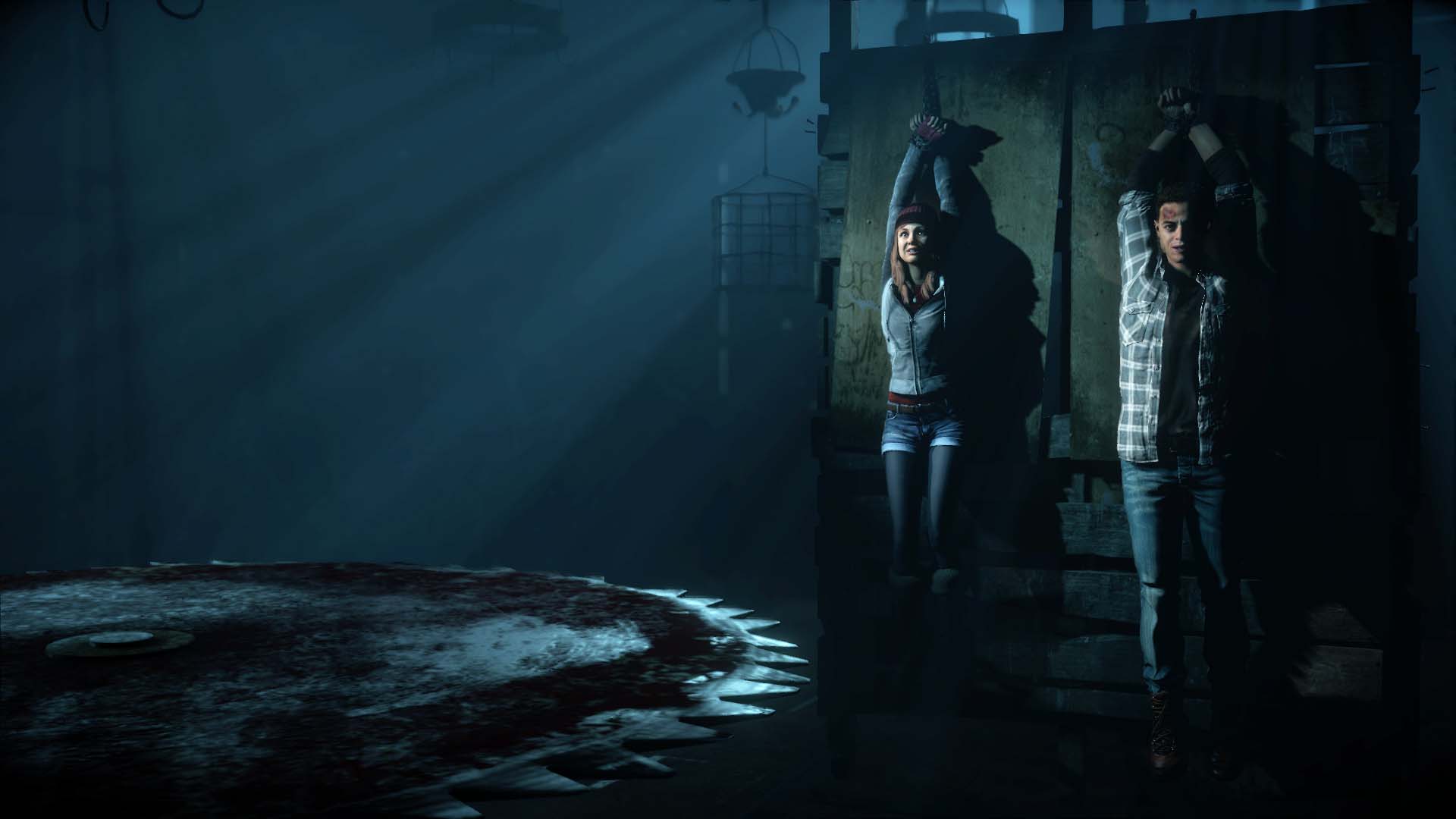 Totems in the game are the collectables you feel are filler but actually you need. At first I felt like it was any other game that allows you to fill out the time in the game scavenging for objects with no significance. On the opposite, they are useful beyond means, each one is modelled after a different element Danger, Death, Future and others showing you glimpses of what could be possible to come.

I found myself trying to find each totem to give me some heads up of what’s to come. One showed a character burning which meant, trying to stay clear of fire when controlling him and another showed decapitation. The great thing about Until Dawn is even with the knowledge the choices still determine what happens and although I was so careful the warnings from the Totems stills came true on occasion when I did not want them to.

There is no actual action combat, anything that requires you do do something more than move around the environment is coupled together by a sequence of quick time events. Blended in with the cinematic experiences, these short chances to press the right buttons makes you feel more immersed with the characters who also have little time to react in their slasher horror. Missing a single QTE could mean falling over when running away, being slowed down by objects or missing that fatal ledge while climbing and falling to your doom. The QTSs are more important than I first realised, the first time I failed, I fell down a small cliff and started to climb again, not paying so much attention the next time I was not so lucky, and my survivor count dropped.

Staying still can feel like an eternity and is a great use of the PlayStation's DualShock controller.

The best and most successful use of the PS4 controller is in Until Dawn. Rather than being a gimmicky add-on it puts its roots into the game and genre’s design. When lighting a match you find yourself striking the stop of the touch pad, and when you are hiding and the enemy is near you need to keep completely still. This motionless action really immersed me into Until Dawn, when I was watching my character on screen I found my self holding my breath to make sure I would not move. This really emanates with the slasher genre, and mirrors the characters body language and what they are feeling.

This is coupled with great music, sometimes so carefully and quietly places it allows you to not even realise who much it is drawing you in and building up the tension. Not surprising coming from the Dead Space composer Jason Graves.

Even with the good bits about this game there are some parts which could be improved. Cameras are one of them which is coupled with the controls. A lot of the time the camera focuses on a strange angle like placed on the ground, pointing up someone nose or in the corner of a room away from the door you are walking through and snapping between them makes it even harder. Controlling characters become quite annoying a times and makes you lose focus on what you were doing because you can’t determine your direction. This makes it hard to navigate smaller places such as caves with winding corridors. 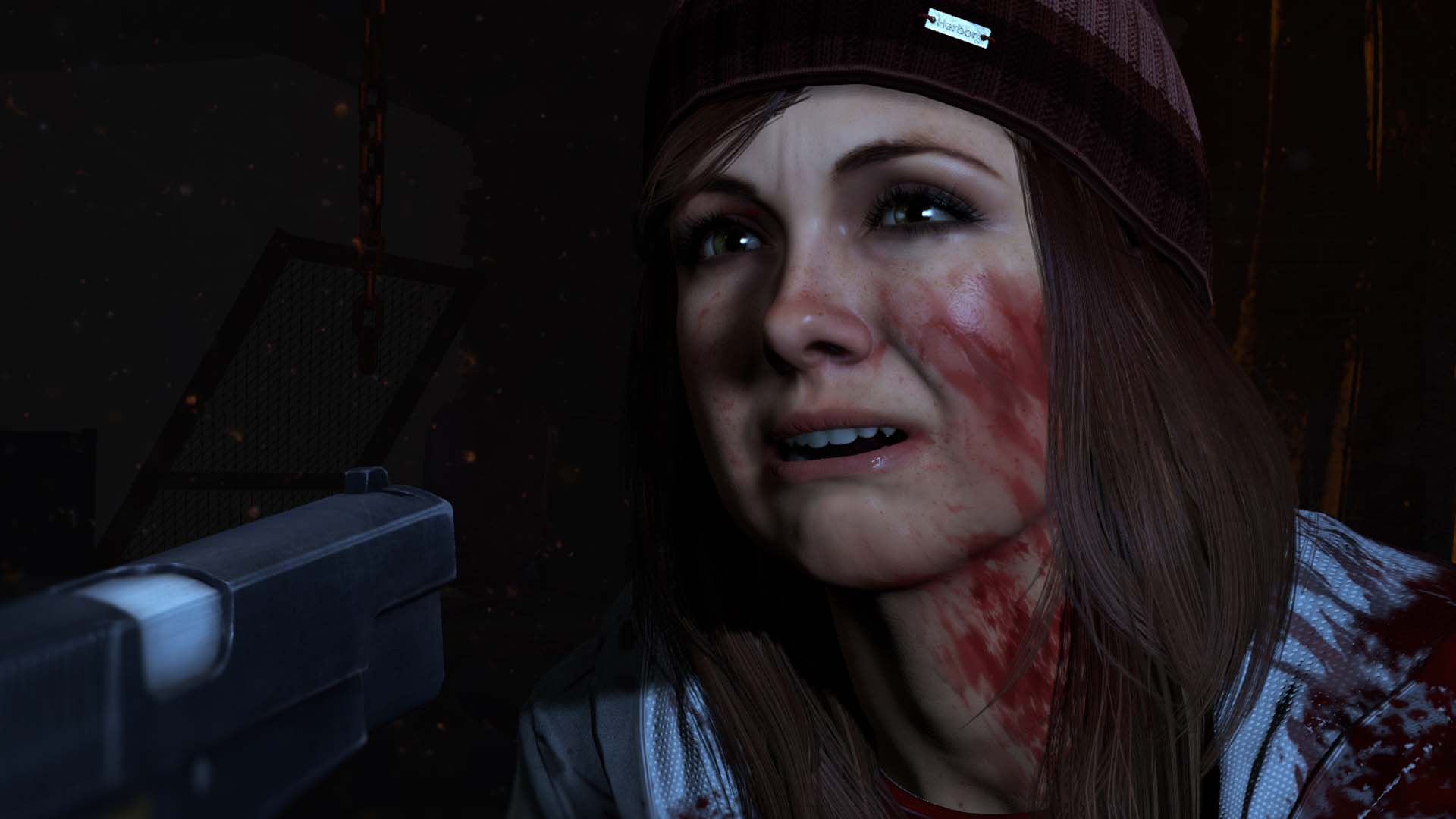 Although the acting is great and the cast have really nailed the scared teen so close to death, there is still a lot of improvement in facial motion capture technology, and can sometimes make a disconnect between what they are feeling in their tone and what their face is saying. This can also go into the realms of unrealistic, and leave the characters reaction looking strange and bring down the great acting the game has to offer. Fortunately this was something I only noticed occasionally, and is something that would be a improvement rather than anything fundamentally broken.

Fear is a big emotion horror games play on and Supermassive have made some great investments into how players will react. By testing the game with biometric feedback and recording reactions, they were able to see if any part of the game was not working properly. This does show in parts of the game but for others it seems like they have just thrown in a jump scare, and recorded the obvious reaction and gone with it as success. It would of be nice for them to delve further into instilling fear by expanding on how they use the tools of their games rather than the tried and tested.

Until Dawn as a teen slasher horror hits pretty much every note, and the story continued to become more and more interesting. Each choice further cemented me into the game to find out what was going to happen and how my choices would change the game. With great narrative, an outstanding cast and the best use of the systems controller in any game on the PS4, Until Dawn successfully becomes a horror game that you should not miss out on and a great achievement in story driven design.

Until Dawn is a great horror game on the PS4 which everyone should try. It has some downfalls, but are far and few between the great cast, storyline, music and in game mechanics.