Back in the March of 1997, one of the most popular PC simulation games of all time made its debut. Developed by long time British developers Bullfrog, Theme Hospital became an instant hit with its unique visual style, compelling gameplay and surrealist humour. Although many developers tried to recapture the magic of what made the game work, none of them have reached the level of acclaim afforded to Bullfrog’s medical masterpiece. Announced earlier this year, Two Point Hospital is the latest attempt to define a spiritual successor, with several of the original game’s staff on board to keep things on track.

Like the majority of simulation games, there is no defined narrative in Two Point Hospital. Your role as the player is to build a hospital from scratch, designing the layout of the rooms, hiring the staff and ensuring that your patients receive a clean bill of health. There are occasional cutscenes to explain your role after certain levels are completed, but they can be easily skipped if you would prefer to skip ahead to building your next hospital. It is highly recommended that you do not skip these scenes, because they are every bit as hilarious as they are informative. As you may appreciate, hospital construction is not as simple as it seems. To compensate for a vast range of players, each of the game’s levels has their own theme, with each one introducing new illnesses and treatment clinics at a comfortable pace.

New and returning players will be pleased to learn that like Theme Hospital, Two Point Hospital has a tutorial system that gives clear instructions on how to accommodate the needs of the staff and patients. This is especially useful when starting each level, because the vast amount of empty space can be intimidating to even the most experienced gamers. The difficulty curve raises steadily as you continue to build your hospital empire, with later levels requiring strict monetary discipline in order to keep them running smoothly. The biggest change to the gameplay structure is that you do not need to wait till the end of the in-game year to complete each level. Once you have cleared the objectives for the 1 Star victory condition, you can either stay to get the maximum 3 Star grade or continue onward with your medical career path.

One of the most important elements of a successful hospital are the staff, and Two Point Hospital’s employee roster has significantly expanded since the days of the original game. Whether you choose to take on a doctor, a nurse, a receptionist or a janitor, the potential candidates are now from both genders, and have a variety of visual changes such as ethnic descent. It may not seem like much of an alteration, but it is nice to see the game introducing the diversity that is prevalent in the modern world. Another positive change is that the staff’s individual personalities now affect their job performance, instead of being solely there for the purposes of comic relief.

The sometimes-hilarious illnesses that plague the visitors to your hospitals have returned from Theme Hospital, with several new comedic afflictions such as Jest Infection, which transforms the victim into a clown, Lycanthropy, which makes the suffering individual into a werewolf and Light Headed, where the patient’s head has mysterious turned into a lightbulb. The cures are every bit as ridiculous as you might expect, with Jest Infection victims being shown a series of images to drown out their eternal happiness, and Light Headed sufferers having their head screwed out and replaced with a human styled head with their original appearance and memories intact.

The graphics of Two Point Hospital are bright and colourful, with cartoon styled character models that are reminiscent of Aardman’s famous plasticine duo Wallace and Gromit. The frame rate is consistently smooth at every resolution, even on a PC that only meets the minimum specification required to play. The soundtrack is filled with bouncy MIDI tunes that are in the same vein as the original game’s infamous music library. The comical announcements by the receptionists also make their return, along with a host of satirical radio presenters who make bizarre humorous quips in between each music track. The only small issue that we found was that the receptionist’s voice is always portrayed as a woman, even if the staff member was distinctly male.

Overall, Two Point Hospital is exactly what a true sequel to Theme Hospital should be. It builds on the compelling gameplay and tongue in cheek humour that made the original game so fondly remembered, as well as adding some modern changes such as 3D cartoon graphics and ethical diversity to make your medical endeavours feel like an entirely new experience. If there is one game that should be made available through the health service, Two Point Hospital is a prescription that should be taken at least once a day. Chewing is optional, but for the sake of your computer hardware, it is not recommended.

If you are looking for a game to bring challenge and humour to your daily life, Two Point Hospital is exactly what the doctor ordered. 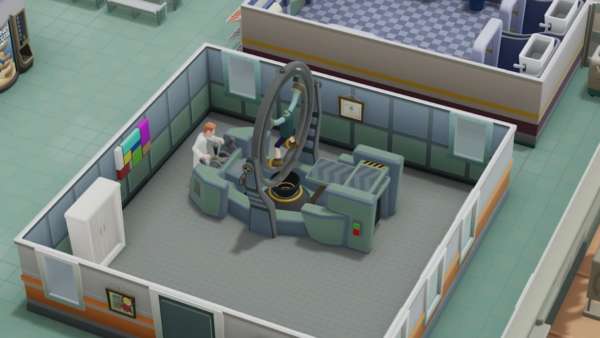