With Titan Souls, the three man indie studio Acid Nerve have blended elements of the Souls series, Shadow of the Colossus and the Legend of Zelda to create its own take on the boss fight focused adventure game. Does their attempt create a titanic experience, or is it a colossal failure?

Titan Souls was originally conceived in Ludum Dare 28, which had the theme of ‘You Only Get One.’ This translated into the core concept of Titan Souls, being that you only have one arrow in your quiver and that you only have one hit point. This means that any hit from the game’s 17 Titans will result in instant death. However, this applies to the game’s titular Titans, who also fall in a single strike, should you hit their weakpoint with your singular arrow. Your arrow is not your standard one though, as you can hold down the fire button in order to pull it back to your hand, allowing you to continue firing at the current beast you are fighting. This creates a key point of tension in each boss fight, as you have to balance having your arrow in your quiver with moving yourself to a safe position. You can also kill a Titan by pulling your spent arrow into their weakpoint, giving you a second chance of rectifying a missing shot.

While your character may have a dodge roll (as must be the case if you are paying homage to the Souls series) and a run, she seems incredibly sluggish compared to the nimble giants you will fight over the course of your adventure. You will fight a giant yeti who can zip around its cave in a giant ball, or a teleporting knight whose arrows move at ridiculous speeds. Combined with the fact that you have to manually aim your arrows, with your character taking half a second to notch her projectile before you can fire, you feel woefully unfit for taking on gargantuan fiends.

This is where my main problem with Titan Souls arises. So much of your success in battle feels like dumb luck, rather than a result of your skill or growth as a Titan slayer. Unlike the Souls or Zelda series, Titan Souls takes the approach of Shadow of the Colossus and has it that there are no new weapons or arrow types to collect over the course of your journey. The archer you start out as is the archer you’ll finish as. Even in Shadow of the Colossus, your health and grip gauge would increase as you killed Colossi or found special fruit in the game world. In Titan Souls, you get no such luck. Moreover, due to the fact that the Titans’ speed and ferocity exponentially increases the further you go while you stay the same, the later fights are an utterly infuriating experience.

Due to the ‘You Only Get One’ mantra which Titan Souls sticks to, Acid Nerve have to contrive more and more irritating ways to make bosses harder. Be it by throwing tons of projectiles at you, giving bosses ridiculous movement options or reducing the window by which you can get a clear shot at a Titan’s weakpoint to about a second. This makes the final fights seem just unfair. There is no sense of satisfaction when beating a later Titan, just a feeling of desperate relief that you never have to go through that nonsense ever again. Due to the fact that some fights can be over in under fifteen seconds, it makes your previous attempts to fell a boss seem like nothing. This is further compounded by the fact that every time you die, you are booted back to the checkpoint of the themed area you are in, just to trek back to the boss and be killed in a matter of seconds. The overwhelming feeling you get when you finally land that arrow is more often than not ‘was that it?’ or ‘thank God for that’, rather than an overwhelming feeling of relief or satisfaction. This is incredibly disappointing as some of the earlier bosses are very well designed and a joy to fight, while the later bosses are just an exercise in frustration. 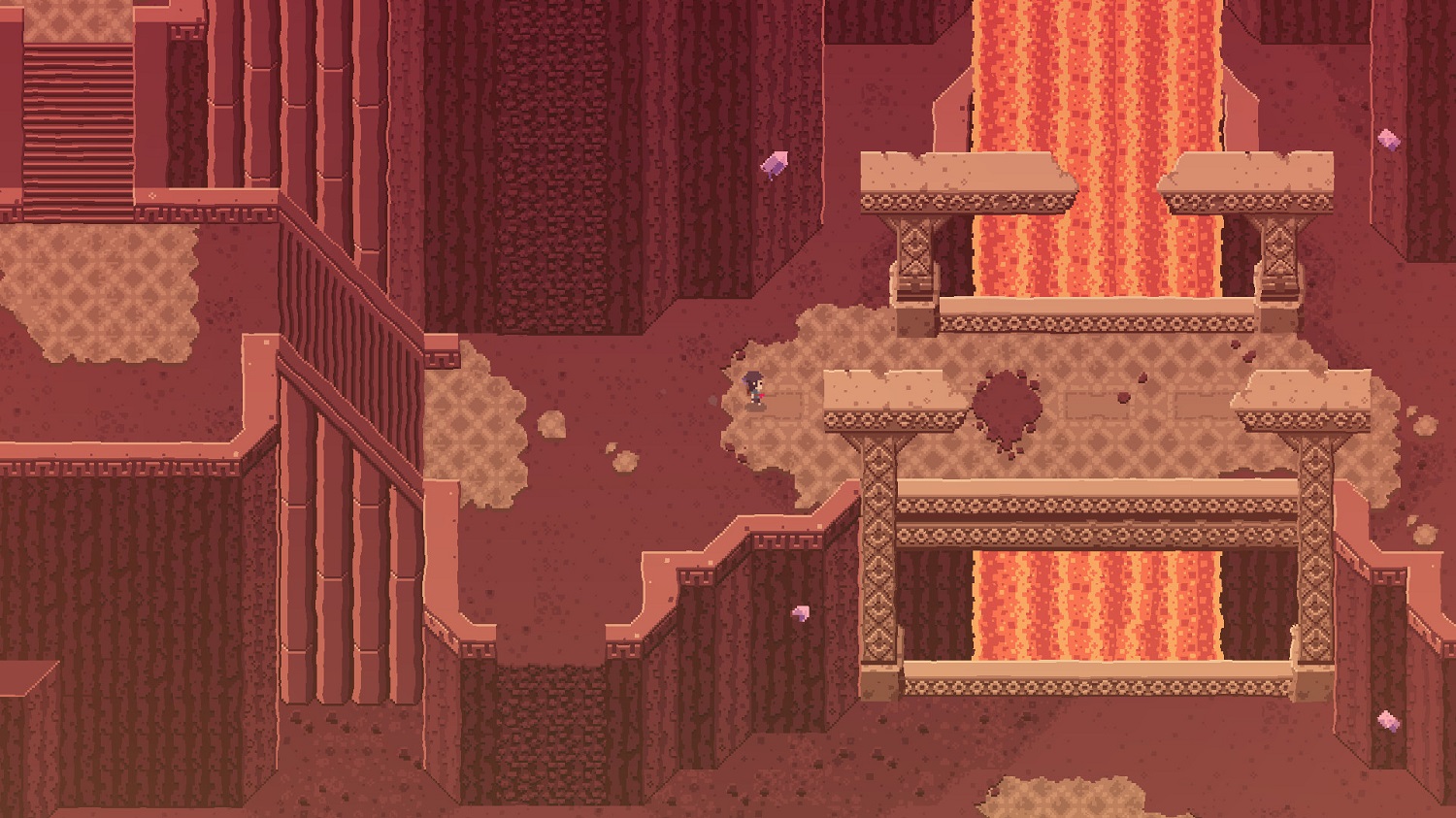 A lava area is followed by a ice one, some ruins and a forest. Would’ve been nice to see something more unique.

Many of my boss kills felt down to plain dumb luck rather than my skill as an archer, which is nothing like how I feel when I down a boss in Dark Souls or finally fell a Colossus. The one hitpoint restriction thus removes the engrossing rhythm that you get in a standard boss fight, making each Titan encounter feel more like a mad scramble to not die rather than a climatic showdown against a tough foe. Instead of gradually chipping away at a boss and finally making a breakthrough through learning its attack pattern or levelling yourself up, the experience of fighting a Titan feels more like you are bashing you head against a brick wall repeatedly and just hoping that one of your teeth flies off at just the right angle to knock the wall down. For the final boss especially, it feels like you are just repeatedly throwing a dart at a dartboard and hoping for the best, rather than using all the skills and techniques you have learned to triumph over your final opponent. Also, the dartboard is attached to a spinning wheel, which is randomly teleporting around the room at high speeds whilst trying to electrocute you.

While the attempt to boil boss fights down to the bare essentials results in more frustration than perfection, the sparse world which Acid Nerve has created for Titan Souls feels bare and lifeless. There is the occasional secret here and there and the world does look beautiful, it is merely surface level. There is simply nothing to do in Titan Souls’ overworld, besides walk between the next checkpoint in order to go to the next set of boss fights. The game’s soundtrack is fantastic but the fact you’ll probably only hear it in 5-25 second snatches. You’ll be too busy cursing out the boss you’re fighting than listening, thus making the soundtrack fade into a haze of swearing and missed arrow shots.

Upon beating the game, there is very little to make you return to Titan Souls, unless you are a speedrunner or a complete masochist. You unlock a series of more difficult modes once you defeat the final Titan, which range from a Hard mode, to one where you can’t roll or run, to one where you only have one life. When people do start speed running the game, they will be amazing to watch and if anyone does completely the game on Hard, without dying or rolling, I will proclaim them as the Messiah.

Titan Souls is ultimately a game that should have stayed a proof of concept. It is a blast for the first 4 bosses, when each Titan’s design is unique both visually and gameplay-wise. Unfortunately, the experience falls apart when you are on your 40th try of trying to beat another boss which is a floating head with a glowing weak point. There is nothing functionally wrong with it, but the bare bones overworld, lack of any real story or character progression and £10 price tag causes Titan Souls to be a journey not worth taking.

While it has an interesting core concept, Titan Souls runs out of steam very quickly, resorting to infuriating boss fights placed throughout a bland overworld. While there is nothing functional wrong with it, it does nothing to really push it into the pantheon of other boss rush style games.