Telltale Games’ The Walking Dead Season One received immense critical acclaim, chronicling the journey of Lee and Clementine as they made friends, evaded foes and gave everything they had in order to stay alive. It was intense and kept you on the edge of your seat, as you had no clue where the next episode would lead. The exciting moments and unfavourable situations often came due to their helplessness and lack of experience in survival situations.

The Walking Dead: Michonne is the polar opposite. It follows the story of Michonne from the comic book series on her previously undocumented journey between episodes #126 and #139. Episode One, In Too Deep, kicks off heavy with Michonne battling her inner demons and having to decide whether to give up and take a bullet to the brain, or continue to be a machete-wielding, zombie-slaying machine. Unfortunately, as is a running theme with Telltale’s interactive adventures, your choice is meaningless as whichever option you pick has the same outcome; a sailor named Pete jumps in and saves the day, providing refuge for Michonne aboard his boat with a few other shipmates. 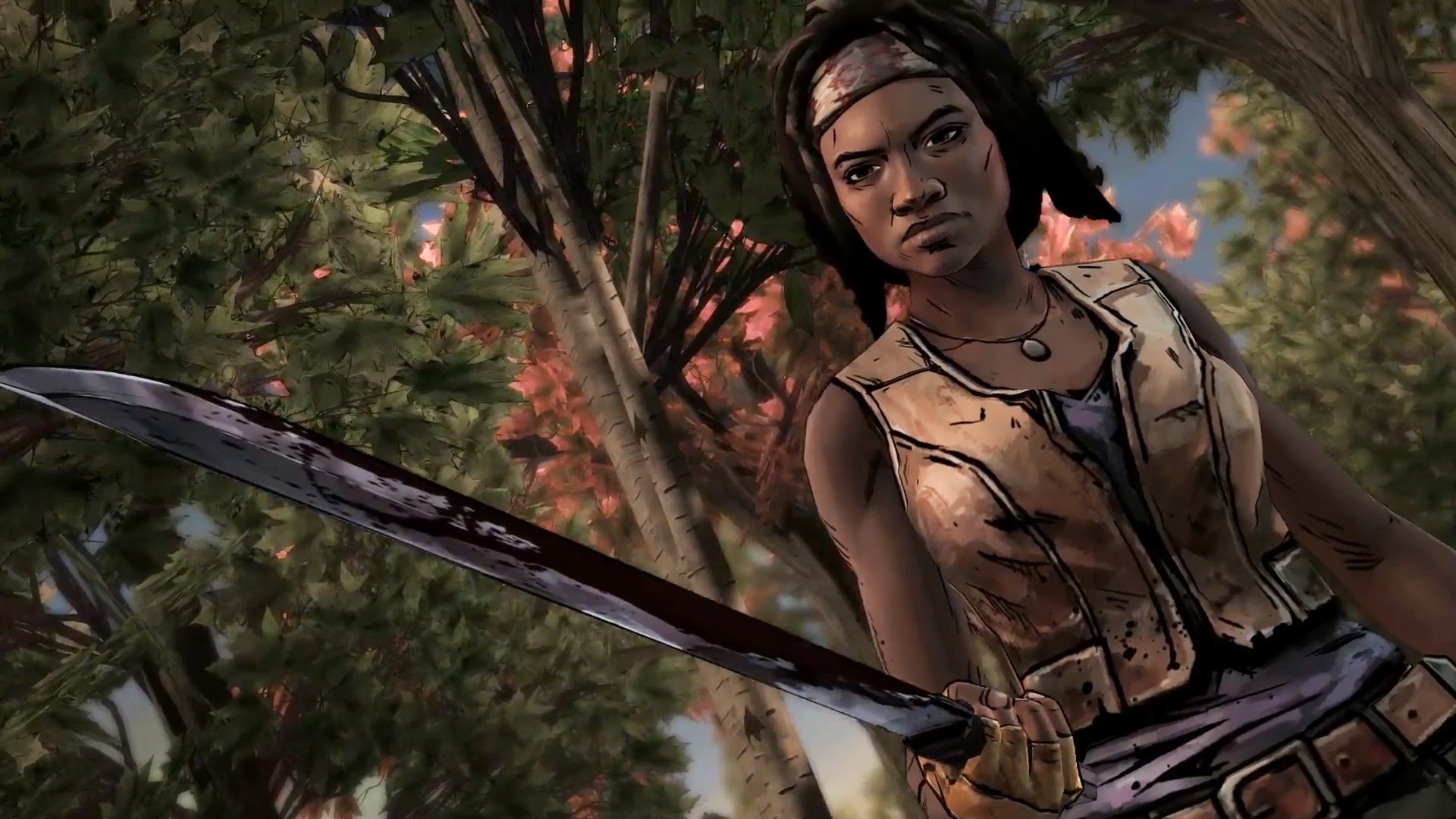 As storylines go, it doesn’t get much more cliché than this in a zombie game/tv show/movie; they’re all interchangeable in a case like this. Without spoiling much, their boat gets stuck so Michonne and Pete go scavenging for supplies, run into trouble then get kidnapped. No doubt Episode Two will see Michonne escape from trouble with the goal of getting back to her friends on the boat. There’s no new ideas here, it’s uninspired and doesn’t leave me longing for more.

The problem with Episode One of this miniseries is that Michonne is a badass. The sense of danger that keeps players hooked in the main series is non-existent with Michonne. She’s been slicing zombie heads and negotiating with thugs for over 100 episodes of the comic book series, so whilst you can fail the iconic quicktime events that have inevitably made their return, she knows how to hold her own. In a Walking Dead-inspired action game, that style of protagonist would work perfectly but in what is essentially an interactive movie? Not so much unfortunately. 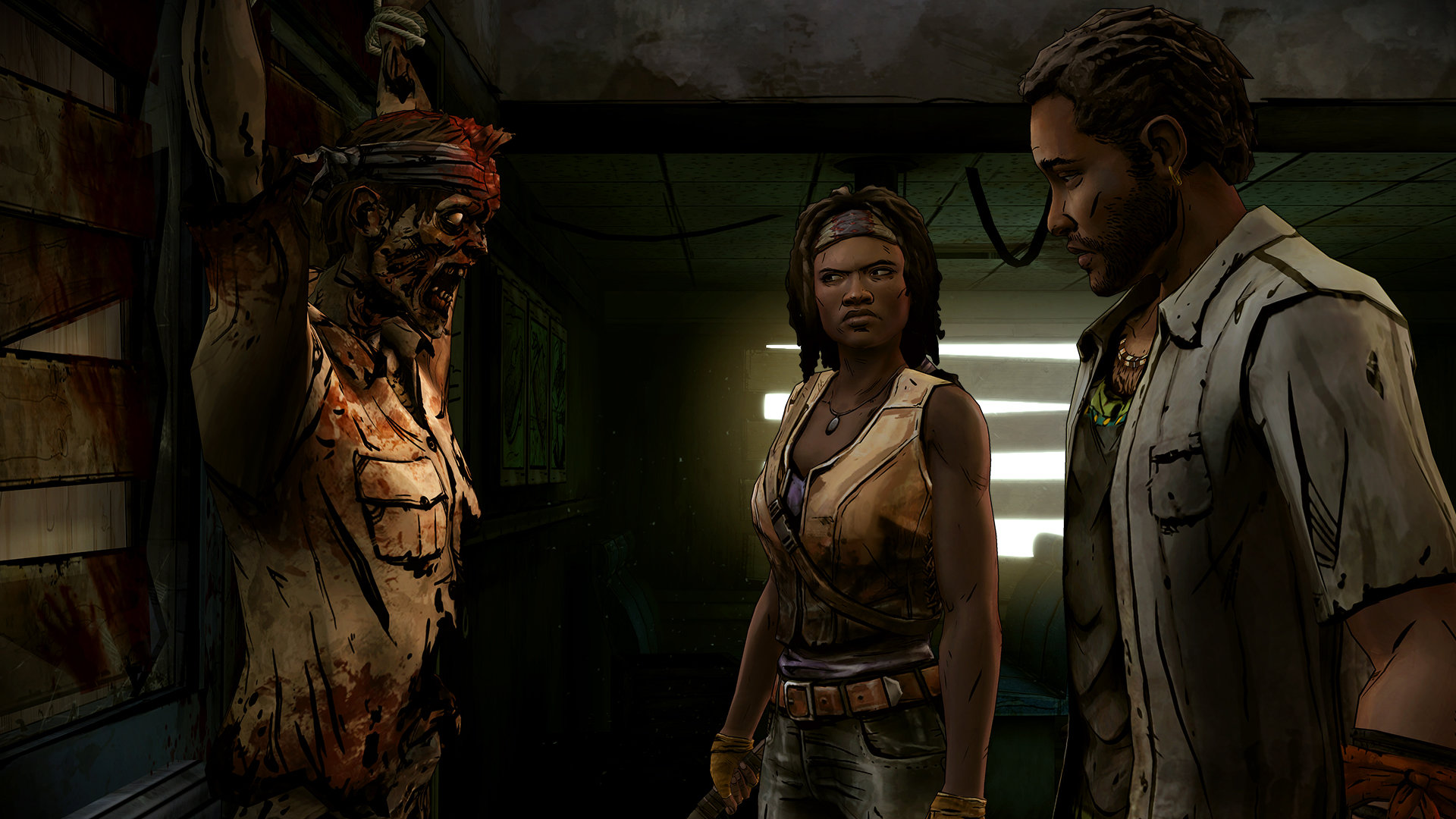 Telltale’s quicktime events have always been visually fascinating, and this time it’s no different. Michonne becomes incredibly creative with her decapitating of walkers and every time she does, it looks insanely cool. It’s not all fast-paced slicing and dicing though, the episode paces itself between point and click exploration and dialogue scenes fairly well. Saying that however, the actual character of Michonne is one of the only positives in the game. While the chances of her ending up in dire situations is small, I found myself caring about what happened to her. She regularly experiences visions of those who are presumably her deceased daughters, causing her to panic and confuse the companions accompanying her at the time, likely due to PTSD effects. Most, if not all of the other characters in Episode One are one dimensional and I’d even go as far as to say most are unlikeable. Whilst Pete helps you out, at best he’s simply your unimaginative sidekick who obeys your commands and listens to what you say like a loyal dog.

It’s worth mentioning that part of what makes Michonne such a stand out character is the voice actress, Samira Wiley from Orange is the New Black. She does a phenomenal job, just like most of Telltale’s voice leads in the past. You can only purchase The Walking Dead: Michonne with all three episodes together, so you’d be best off waiting to see how Episodes Two and Three perform before picking it up. Episode One was about 90 minutes long, so overall you’ll be looking at 4-5 hours of gameplay for £10.99. Fans of the comic book series can’t go far wrong, even if it’s just to fill in the gaps in the lore for Michonne, but if Episodes Two and Three don’t improve then your money would be better spent elsewhere.

If you're a fan of the comic book series and want to fill the gaps in Michonne's lore, you can't go far wrong with TWD: Michonne. As a standalone story focused experience however, Michonne herself is the only redeeming factor. Wait to see if Episodes Two and Three improve on the foundations laid here.

Filed under: in too deep michonne Review Telltale The Walking Dead twd