Taking a break from the usual single player experience of your standard Zelda game, Tri Force Heroes instead follows the path of Four Swords Adventures on GBA and Gamecube, offering a more social quest to complete with up to 3 people.

So, if you walk into Triforce Heroes expecting the grand, narrative-driven experience you usually expect from a Zelda game, then you may end up disappointed. You may also be disappointed if you were expecting the successor to the Four Swords titles. Tri Force Heroes ticks neither of these boxes, making it an odd addition into the Zelda series and therefore may not be everybody’s cup of tea whether you’re a Zelda fan or not.

Though I mention Tri Force Heroes not having the large scaled narrative of a normal Zelda title, it still features a loose story to keep players remotely interested. The story takes place in the realm of Hytopia; a proud, fashion-conscious realm under the rule of the lovely Princess Styla, who befalls a great curse from an evil witch, leaving her without her beautiful clothing and instead donning her in a drab, unflattering onesie. Unlike most Zelda games, you are not the realm’s last hope however. in fact there’s a whole bunch of pointy-eared heroes that are definitely not the real Link, dressed in a variety of clothing, heading out into the perilous Drablands in the hopes to allow the Princess to wear stylish clothing once more.

The story is one element that I can’t help but give props to Nintendo for. The story isn’t one you would expect from a Zelda game and it feels like the developers knew that. Their aim was never make what we would perceive as a real Zelda game, but rather a Zelda game that casual players could simply have fun with.

Tri Force Heroes is heavily advertised as a co-op gaming experience where the player takes control of one of three Links, who willco-ordinate as a team to get through arena-like sections, solve puzzles, defeat monsters and collect loot. As you traverse these areas you are given a certain set of tasks in order to progress through the game, whether it is to rid the room of enemies or using teamwork in order to flip puzzle switches. It’s designed more like a Mario game, with level 1-1, 1-2 and so on, rather than you clearing extended dungeons with puzzles that all fit together, as you would in your standard Zelda game. The levels are well designed and can contain really fun and interesting challenges for people to persevere through as a team using the few items they have at their disposal. 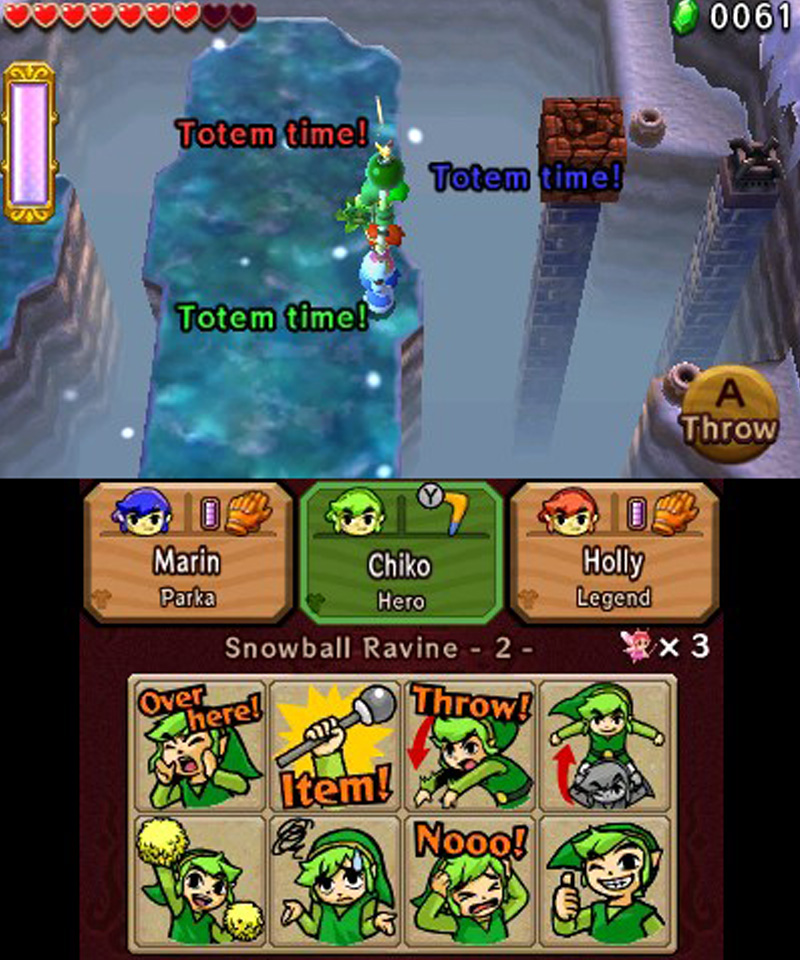 There is also the addition of swappable outfits which allow the Links to swap out that frumpy old tunic and boots combo for clown costumes, samurai armour or even the occasional dress, should it take your fancy. Some forms of apparel will have perks such as a Goron outfit giving you a boost on the damage of your bombs, so there is a perk to accessorising. Other forms of apparel are simply there to be seen as whimsical and entertaining, such as the Princess dress or the Kokiri outfit. It’s a nice addition to the game and is also an added extra to be able to tell which Link the character is playing as, you can make your hero unique to you rather than a clone of everybody around you.

The multiplayer for Tri Force Heroes may still be an entertaining experience, but it is not without its own set of issues. The best way for teamwork is through communication, it’s vital as part of a heavily team-based title but due to Nintendo’s lack of voice chat support for the game, all forms of communication are limited to emotes; small images of instructions and commands that appear over the characters head. This can cause complications due to breakdown in communication, if you want another character to do something specific, then you need to rely on the fact that an emote exists for that. If not, then you’ll end up spending a few minutes of the game playing an intricate game of charades with the other player. There is also the fear that you get that one player who deliberately dooms the mission or goes AFK for a while, leaving you and your fellow Links to twiddle your thumbs until they get back. 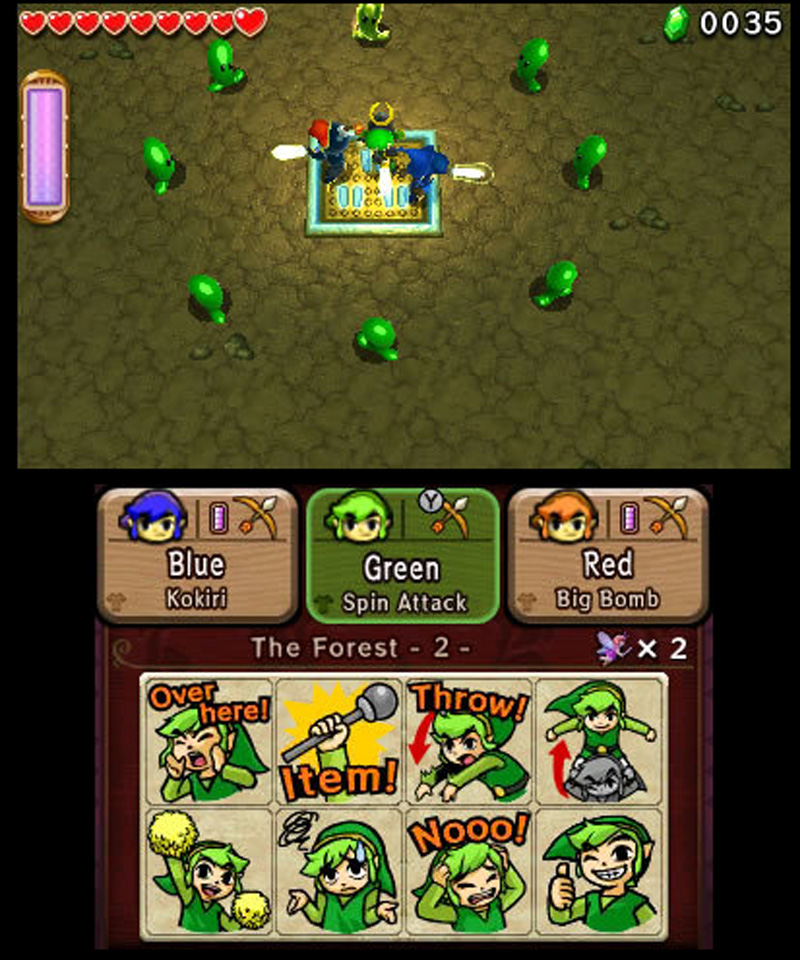 The removal of the open world element makes this game feel very compact and limiting. In previous multiplayer Zeldas like Four Swords, you still had that unique Zelda experience, the only difference was that you got to share it with others. Tri Force Heroes feels more like a party game, getting the players to use their head with the added charm Nintendo usually add to their games and forgoing the usual epic scale of a normal Zelda adventure.

Many of Zelda fans such as myself have approached this game in the hopes that the game can still be played even by yourself, which it can, though the single player experience feels hollow and doesn’t contain half as much enjoyment if you were to enter the online world.When playing single player, you take control of all three Links but can only control one at a time, this makes even the simplest of levels feel much longer as you must move them throughout the level individually. The puzzles can also turn into a tiresome slog as you must remember the placements and abilities of all three characters. It is much easier to focus on one character than focusing on all three. It turns what was a whimsical, light hearted co-op experience into a tiresome chore. Basically, if you are considering purchasing Tri Force Heroes with no intention of online play, the experience will not be enjoyable. I’d pick up A Link Between Worlds instead.

Unlike previous Zelda entries on the 3DS, Tri Force Heroes is a handheld game in the truest sense, the dungeons have short run times making the game something that can be enjoyed in short bursts where levels can be started and completed in minutes, making the game very easy to pick up and put down without worry of lost progress.

If you do enjoy online gaming and want a fun title with elements of that Zelda experience littered across it then Tri Force Heroes may just tide you over until the series next console outing.

Tri Force Heroes is a hugely entertaining title to play with friends, but those who may want to go alone should probably go elsewhere.