The sun shines bright in the ice blue sky, but it does not raise your spirits. The trail before you is long, the weather is bleak, and death is biting at your heels. You’ve been marching for days – weeks – trying to escape the mechanical beings that threaten your clansmen, but no matter how far you travel, you know they’re still out there, lurking amongst the trees on the horizon. Still you march, forever onwards, clinging to what little hope you have left. Such is the gruelling life in Stoic’s tactical RPG, The Banner Saga, where you alone must stand strong while the rest of the world crumbles to pieces.

In its heart of hearts, The Banner Saga is a survival story of epic proportions. Over the course of the game you’ll adopt the roles of a handful of characters, each one attempting to travel across the brutal landscape to escape the Dredge; a mysterious race built of stone who threaten both humans and the horned giants known as Varg. Along the way you’ll be making a substantial amount of life and death decisions as you struggle to keep your clan from perishing from both the harsh realities of Viking life and the looming threat of end times. It’s intense, it’s perilous, and it’s cold.

While there are many individual tales wrapped up within the wide-arching narrative of The Banner Saga, there are two main story threads holding them all together. On one side of the spectrum, you’ll find Ubin, a Varg tax collector who is attempting to make his way to the capital from the west coast of the country. On the other side, father-daughter archers, Rook and Alette, are on the run from the Dredge who destroyed their village in lands far to the east. There is an inevitability that these travellers will one day cross paths, but the journey will not be a simple one, and they will make countless allies and enemies along the way. 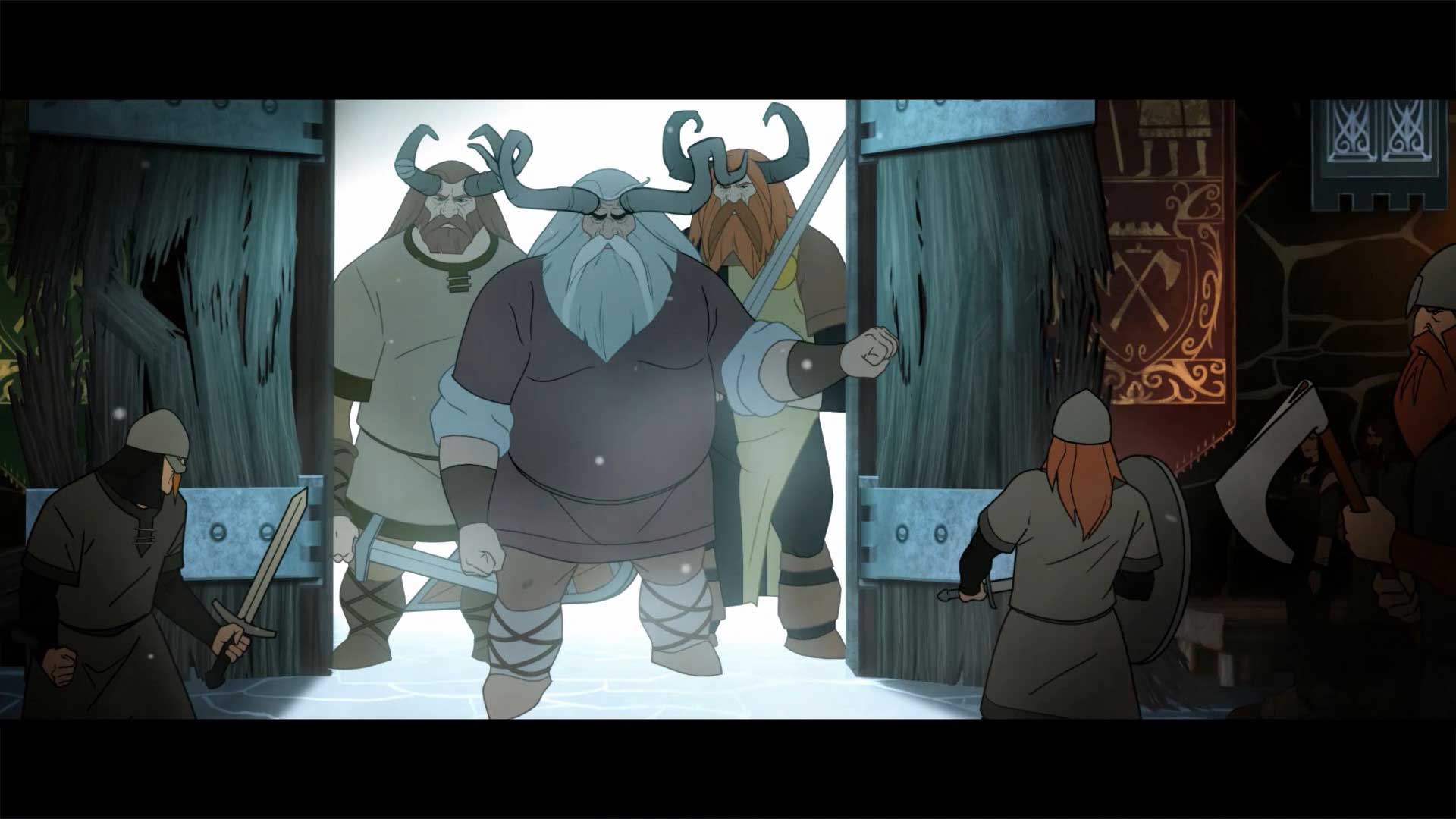 The world itself is vibrant yet harsh, and you can at first feel lost in the foreign land you’ve been plunged into. The lore is very well established and solid, but it is not obviously explained in ways you will find in other games.  Despite the large amounts of reading on offer in The Banner Saga, there are no specific books to flick through to discover the origins of the giants with horns, or a glossary of Viking terms to clarify the finer points of conversation; these things just exist, and you have to go with it. It can be overwhelming at first, but with each new piece of dialogue, map notation, and character added to your roster, little snippets of information emerge for you to begin to understand the world a little better. Eventually you’ll feel right at home, but it is a gradual adjustment.

This work-it-out-as-you-go-along method is prevalent throughout The Banner Saga, with the game providing as little hand-holding as possible. Past the initial short tutorials for the tactical combat, explanations do not reappear, and some more refined aspects are never even touched upon at all unless you specifically hunt them out. While this is refreshing as many games often spoon feed you instructions for far longer than is necessary, just a few more pointers would have been welcome. For example, I was initially concerned that my team dying in battle would lead to permanent death, and while luckily that’s not the case a heads up would have been nice.

Visually, The Banner Saga’s art style creates a distinct storybook atmosphere, almost making it feel as if you are peering into the pages of some dark, Nordic folktale. This comes across through the beautiful hand-drawn artwork, inspired by the darker times of Disney animation, and is a perfect fit for the tone of the game. The landscapes in particular are stunning and intricately designed, presenting the beautiful yet hostile world in a near magical way. All in all, it’s very charming and somewhat nostalgic, and really helps The Banner Saga captivate your attention and imagination. 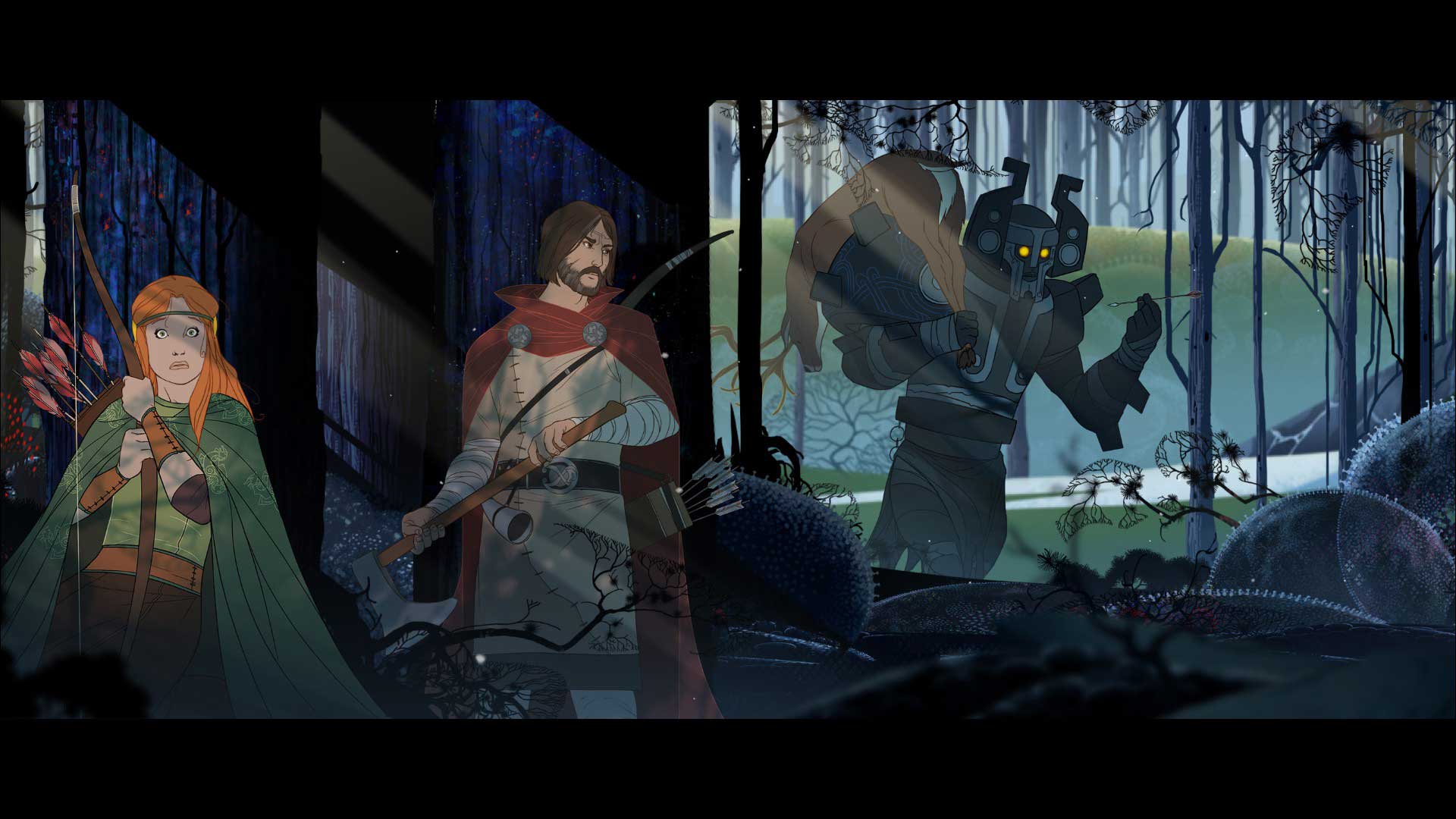 For all of the game’s visual strengths, however, there are moments when the designs feel limited. One or two characters you’ll pick up for your roster will simply be a re-colour of another combatant you already have, and considering the generally huge amount of effort that has been put into the design of the game, this feels a little lazy. A couple more variations in character design would have been very welcome, and would have pushed you to care that extra bit more about the people you’re travelling with.

The large amount of reading you’ll be doing in The Banner Saga further emphasises the story-book intent felt through the art direction. You’ll be spending a lot of time staring at subtitles on the bottom of the screen during dialogue scenes, along with the many other conversation and information boxes that pop up as you travel across the world. While this method of storytelling works just fine, I feel as though some additional voiceover work would have helped better establish personality and presence for the characters. There is some great narration during transitioning cut scenes, and it would be nice to see more of it.

Do not be fooled by the beautiful imagery and story-like features, however; The Banner Saga oozes maturity and is not for the faint-hearted. The dialogue and in-game decisions which fill out the game have a much more significant impact on the lives of those around you than in any other game I’ve experienced. At the mere click of a button you could be signing the death warrants of your comrades, and you often won’t even realise what you’ve done until it’s too late. As a result, you will constantly find yourself mulling over the tiniest of decisions you have to make, never quite sure whether your actions will unintentionally lead to a character’s demise. 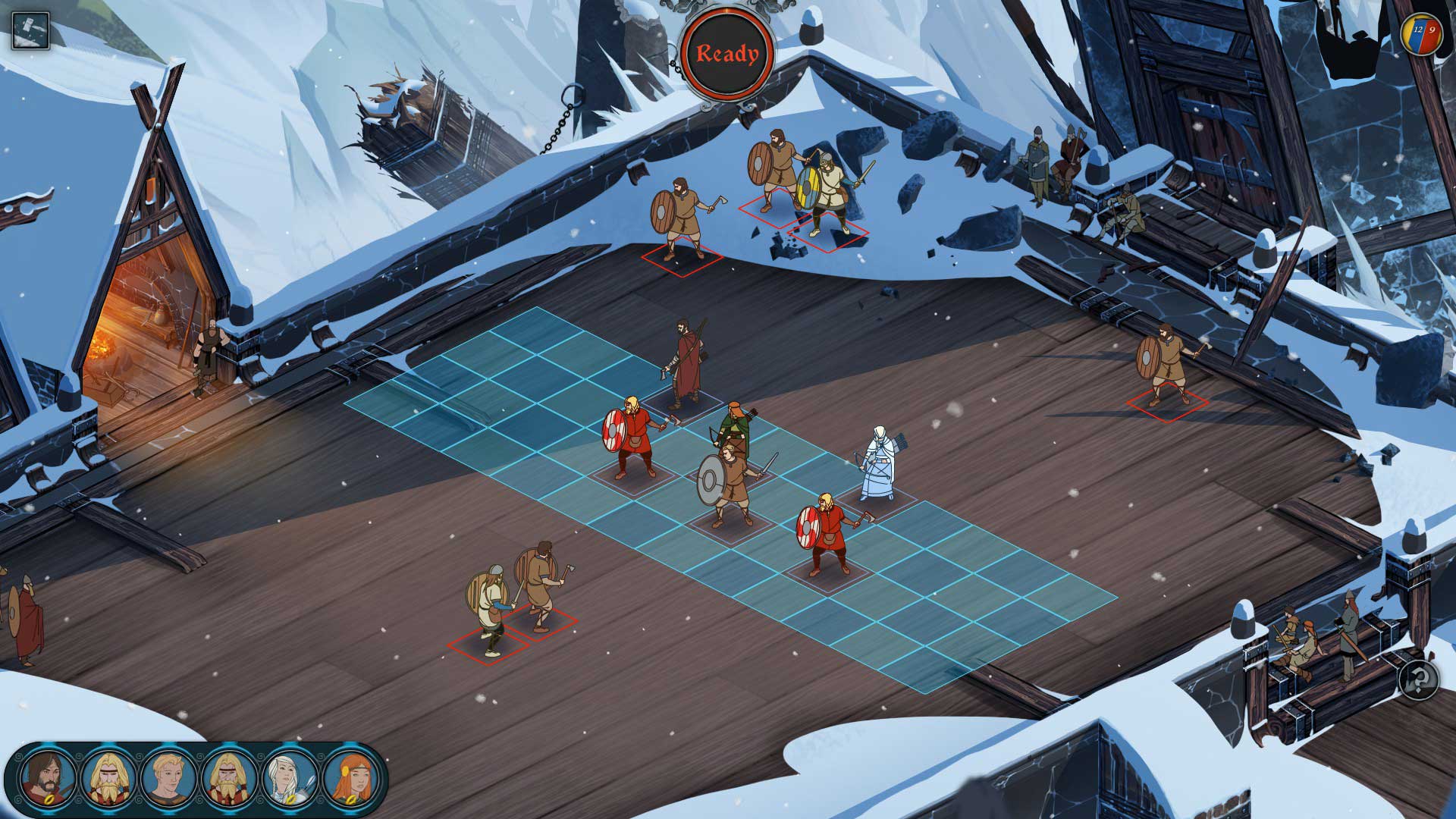 The tactical RPG style of combat in The Banner Saga does well to reinforce the game’s themes of desperation and hard times, as the battles are generally brutal and unforgiving. Anyone familiar with the genre will feel right at home amongst the isometric map and turn-based pacing, but where The Banner Saga does things a little differently is through the core battle mechanics.

There are two main stages to taking down an enemy: first breaking their armour, and then taking out their health. You have to constantly weigh up the figures and decide whether you need to chip away that extra little piece of armour or go straight for the jugular. As well as this, you are provided with bonuses in the form of willpower, which you can use for a small boost to either attack or movement. You have to be sure to use these points wisely, however, as they are a limited and precious resource that can really save your skin in a tight spot.

Similar to the impact that dialogue choices have on characters, you also need to make careful decisions on how to most wisely to use your resources to make it through the game. When you defeat enemies in battle you are rewarded with Renown points, which you can then spend either promoting your characters, purchasing supplies, or buying empowering trinkets. You have to assess what is most important for your advancement, as if you don’t have enough food stocked up until the next village you will start to lose your clan members, but if you don’t level up your characters, you will feel the brunt of the Dredge’s power in the next battle. It is a delicate game of give and take as you have to make informed and sometimes tough decisions. 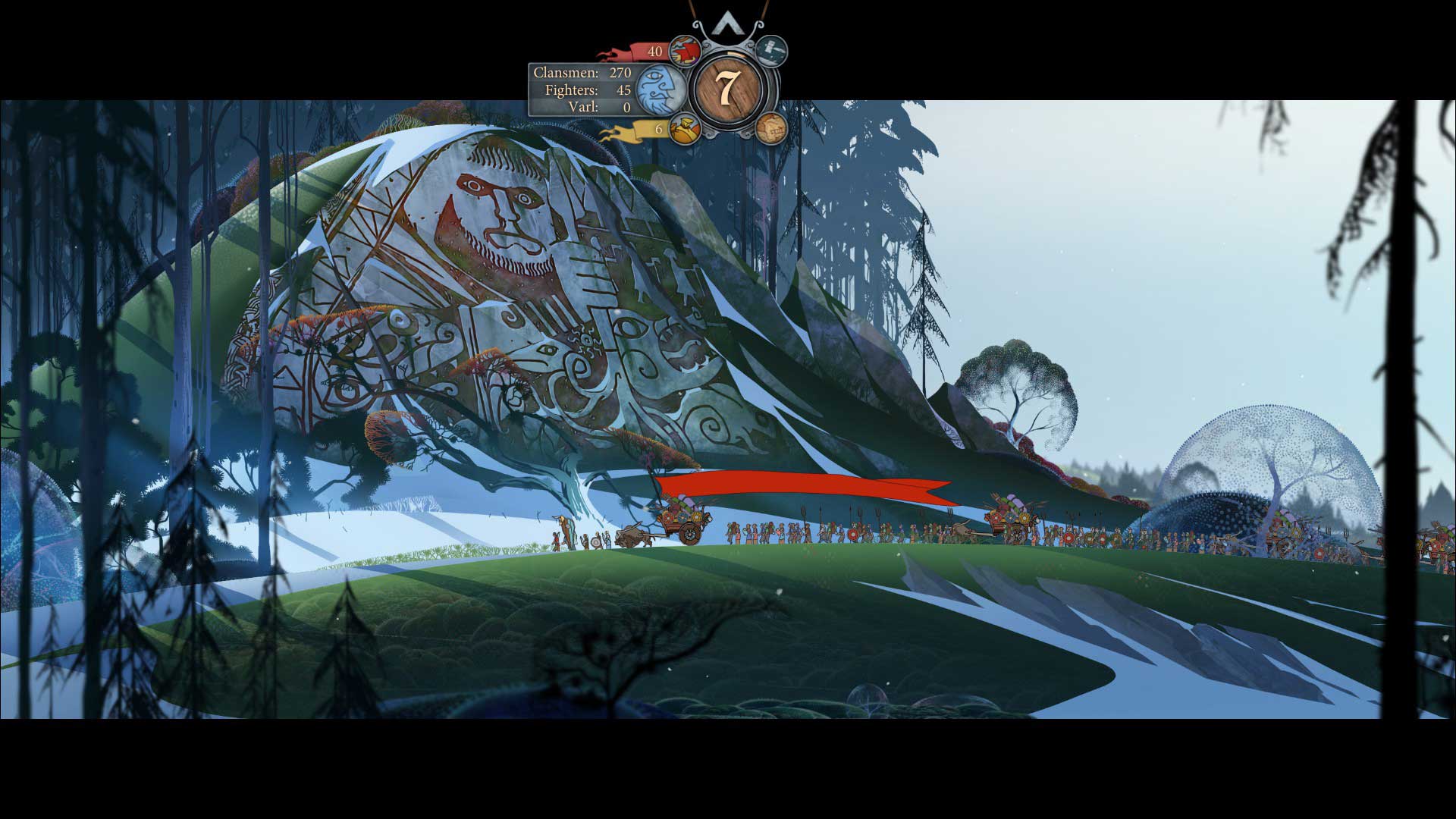 This added depth of strategy does well to keep you on your toes as you are forced to decide what sacrifices are worth making. Your fighters are going to die often and you have to learn to accept that, so instead of trying to keep everyone alive you need to consider who will be led to the slaughter, and who will guide your team to victory. Unlike other tactical games there is no quick save option to ensure your excursions on the battlefield are flawless and that everyone gets out alive. Instead, the game makes you deal with the consequences of your choices, whether good or bad. Even so, while The Banner Saga is intended to be challenging, it is not extortionately difficult, and you can just about drag your way through every battle with a pile of casualties. If you do find yourself struggling to get by or looking for an extra challenge, however, you can change the difficulty settings at any point during your journey, which is a handy feature.

As a whole, The Banner Saga somehow manages to find a balance between being both beautiful and merciless, which is an unusual and wonderful thing. Its intriguing story and striking visuals grab and hold your attention, while the challenging yet rewarding combat keeps you coming back for more. If you enjoy tactical RPGs, have a taste for Vikings and giant, stone robots, or are just looking for something a little different to your usual game experience, then be sure to pick up this game.