When I approached The Banner Saga 2, I wasn’t sure if indie developers Stoic could cause lightning to strike the same place twice. Somehow though, with a few hand-drawn images and clever prose, Stoic have crafted something special.

The Banner Saga 2 would be better described as Banner Saga: Season 2. Everything begins where the original ended with little time for explanations or context. An armour bound race, known as The Dredge, continue to spill across the world, a gargantuan serpent is ripping the world apart, and a vague darkness threatens to consume everything. The band of nomads are still desperately outrunning this one-sided war and the difficulty enjoys punishing over-confident players. Bloody cheery stuff.

Stoic continue to use their favourite trick – giving you just enough rope to hang yourself and magically turning it into a piece of string just as it begins to bite. In almost any other title this would come across as pure sadism, but here resonates with the tale of loss and fortunes fickle finger that the adventure pulls you through. It never lets you stand on one foot long enough to feel comfortable. My group was always starving, or low on morale, or a valued fighter was too injured to use when I needed them. And then it all flips over with a wrong (or right) choice of words. The random events giveth and the story taketh away in a dance of answered prayers and stupid decisions.

Breaking up the cavalcade of bleak desperation eventually you’re given the chance to be brutally evil. Handing you a band of mercenaries, Stoic flip the script, letting you experience the other side of the coin – killing and maiming for survival. The level of moustache-twirling evil varies, but the choices go from “how much do you help them” to “how hard to you want to start stabbing them”. 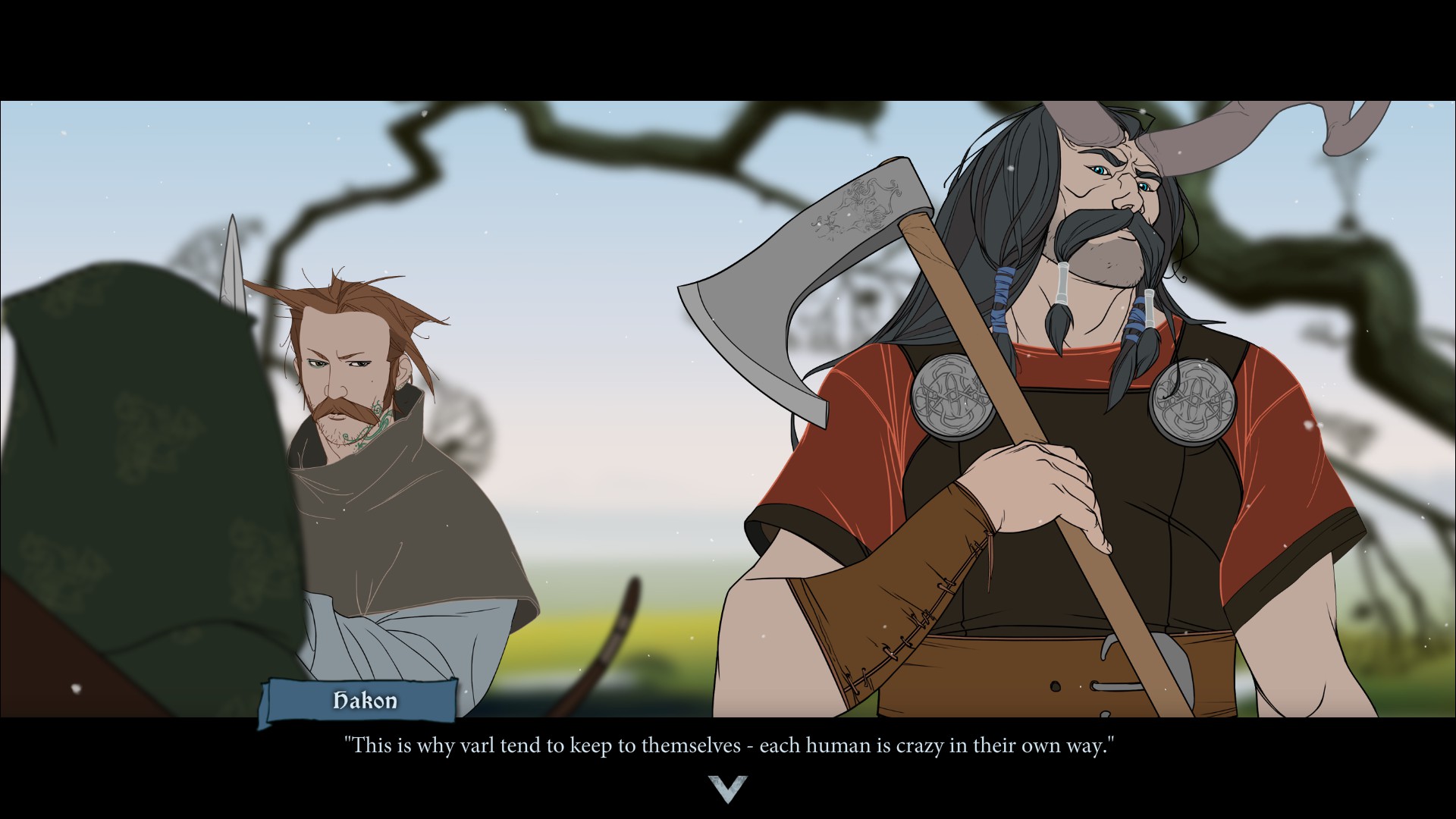 These tonal breaks give Banner Saga 2 a broader emotional range, whilst focusing the story onto a few characters. The main thread changes depending on who died in the first journey. For my story, Alette, the teenage daughter of the first games protagonist, took centre stage. My journey was one of proving my worth to a caravan of doubting grizzly men. Where the first had the shotgun approach to showing you its world, the second tells a more specific tale, in a better package – when it’s not unrepentantly taking a piss on your camp fire.

When not staring at the elegantly drawn background art as it moves from right to left, and when words fail, everything shifts from side on 2D animation, to isometric strategy. Combat is presented like a board game. One of those board games about smashing one bearded man into another, angrier, bearded man. These angry men come with various classes and abilities that level up through kills. The original left the class system rather basic, with high-armour shielded types, crushing melee units, and weak archers. This roster has been expanded to include buffing poets, Berserkers who like to hit anything near them, and a new race of Centaurs.

No addition feels tacked on or unworthy. Stoic seems to have put a lot of effort into how their abilities work together, even specifically pushing you into training to learn these synergies. All the new elements feel like what the first game should have been, with the right amount of new elements and working out older issues. Battlefields finally include terrain obstacles, including barricades that will stop the giant Varl, and Ash will heal Dredge as they pass over. Fallen warriors can only be healed by resting, losing precious time and supplies instead of forcing them onwards. Balancing this out, individual enemy units now seem weaker, but are much more numerous. 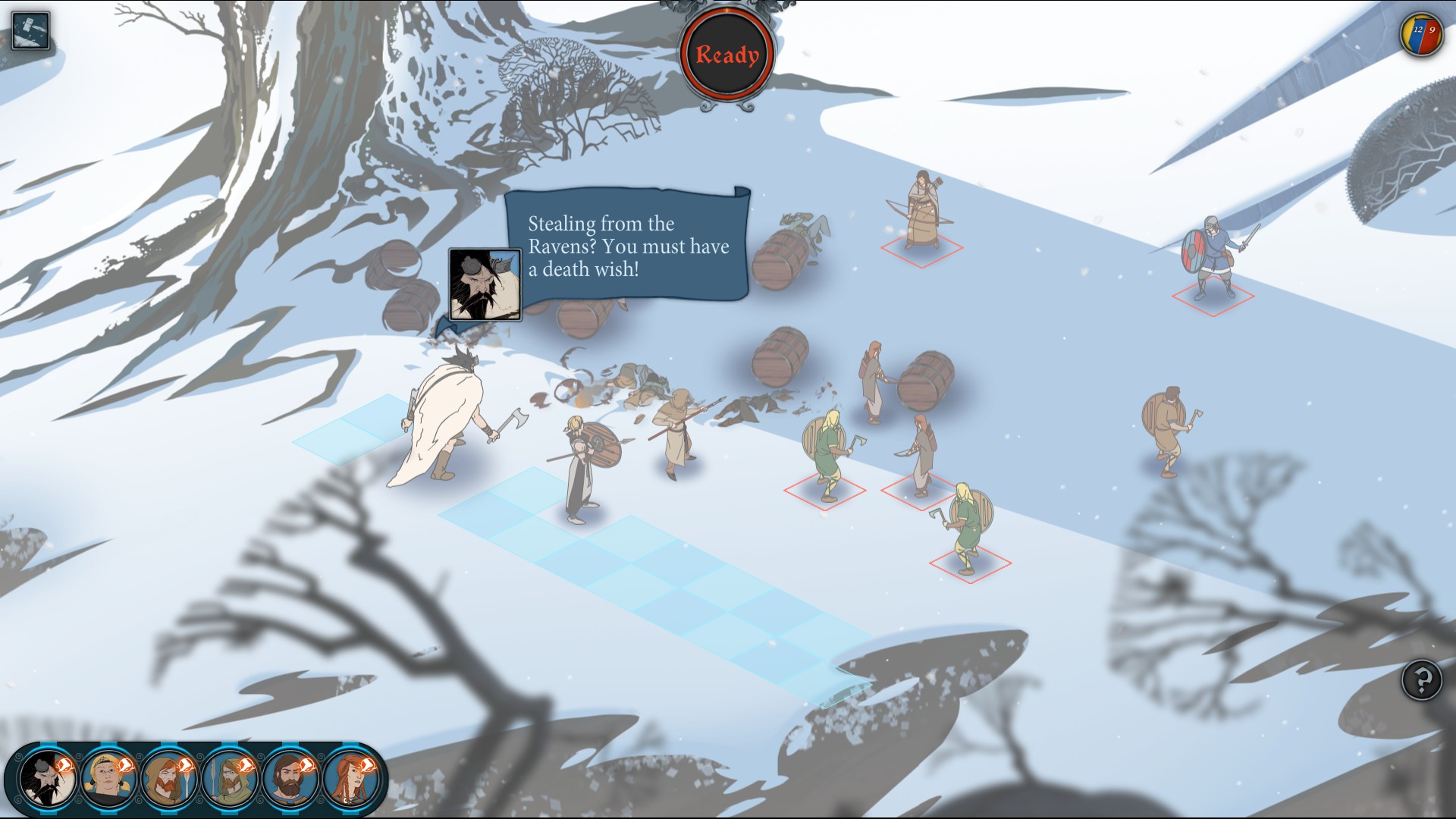 Issue arises from the power creep injected as to not reset all the characters to level 1. As stat progression is limited, maxed out fields unlock perk skills that grant the chance to ignore damage, regen armour or buffs on kills. Eventually, my favoured squad could wade onto the battlefield and scratch off rounds of damage if lady luck was on their side. These moments were few and far between, but occasionally felt like a brute force solution to the problem. Given the attention to detail each other facet has been given, this slight tarnish can turn later play into bulldozing experience if you play your cards right.

The Banner Saga 2 surpasses predecessor in every way, tightening the scope of the story and upping the amount of tactical options. At times this digital board game is elegantly designed and hauntingly beautiful experience. While it never overloads its Jenga-tower of ideas, it can sometimes sway too far. For the second act in a planned trilogy, how far can Stoic go before it falls?

Disclosure: A review copy of The Banner Saga 2 was provided by Stoic.

A beautiful continuation for anyone invested into the world and its characters, let down by balancing issues as it progresses. Despite this minor tarnish, Banner Saga 2 improves upon its predecessor in almost every way.