With more than twelve adventure game seasons under their belt, it is fair to say that Telltale Games have found their niche For one of their projects this year, they teamed up with 2K Games to offer a series based on the first-person comedy shooter franchise Borderlands. Some of you might be worried about how a fast-paced action game could translate to a graphic adventure game, but you can be assured that Telltale have created another wonderful experience that works well within the Borderlands universe.

The storyline of Tales From The Borderlands takes place a short while after the events of Borderlands 2, where the now deposed Handsome Jack is nothing but an idolised memory on the moon of Helios, and a welcome omission on the planet of Pandora. After being kidnapped by an unnamed mercenary, Hyperion employee Rhys and professional con-woman Fiona are forced to recall a series of events from when they first met, under threat of elimination by a carefully aimed firearm. Over the five episodes, Rhys and Fiona each explore their specific memories, and sometimes contradict the other with a hilarious breakdown of the fourth wall. The trademark Borderlands humour is definitely intact, with plenty of subtle jibes such as the off hand comments appearing on each character’s introduction screen. 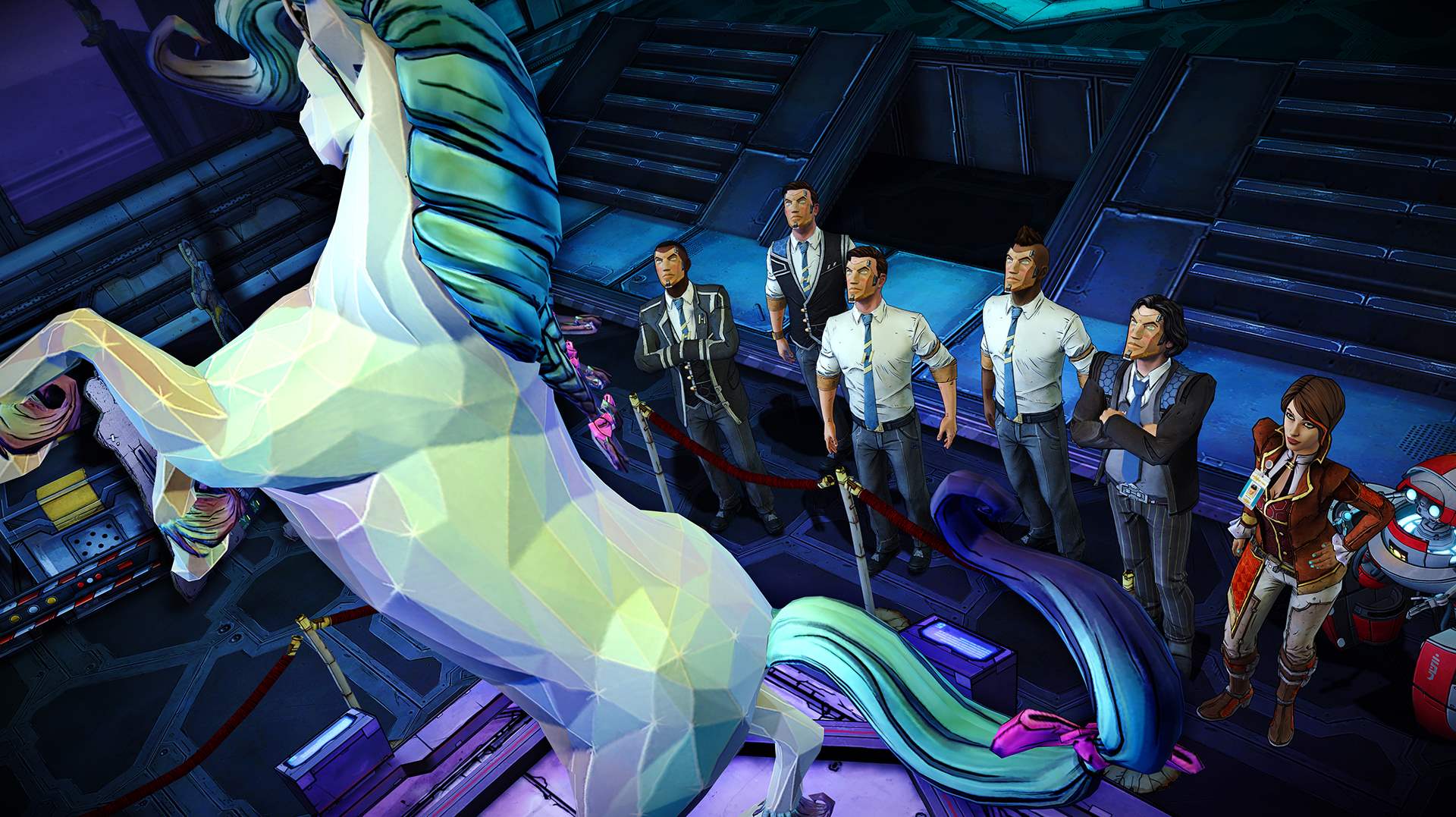 In keeping with Telltale tradition, the player makes a series of choices at various points throughout the story that can completely alter the course of the game. After playing through the adventure multiple times, I was surprised to find that each choice lead to unique paths in the narrative. One example of this is choosing not to tell a bounty hunter about their lover’s confession of their feelings. If you do this, then they will not be so eager to work together when they reunite. Whilst the narrative of Tales of the Borderlands is well built, with several moments that will leave you reaching for a handkerchief, the third episode feels slightly less polished than the rest of the adventure. While it works perfectly well with the rest of the series, some of the choices feel forced and a little predictable. The best episode would definitely be the fifth and final instalment, as it is an emotional roller coaster from the apocalyptic style start to the beautifully constructed finishing scenes.

From a graphical perspective, Tales from the Borderlands uses the graphic novel style that was adopted in The Walking Dead which, fortunately for Telltale, is very similar in style to the art style of the original Borderlands series. This similarity is taken one step further in the user interface, as the graffiti-style GUI is present throughout, in combination with Hyperion-style user screens for selecting new clothes and other new additions to your inventory. Most of the changes are merely cosmetic, although some of them will give you an advantage when entering into restricted territory later in the adventure.

The gameplay of Tales from the Borderlands is in keeping with Telltale’s previous titles, using the left analog stick/directional keys to maneuver the character throughout the world, whilst the right analog stick/mouse pointer allows you to interact with the world with a single click. To keep things interesting, it is possible to enter into fights which are similar to the battles in the main Borderlands games. Whether you are using a loader bot’s melee strength or an elemental bullet from a handgun, each fight feels as exciting as the last, as you never know what weapons you will to be able to use until you are forced to use them in battle. 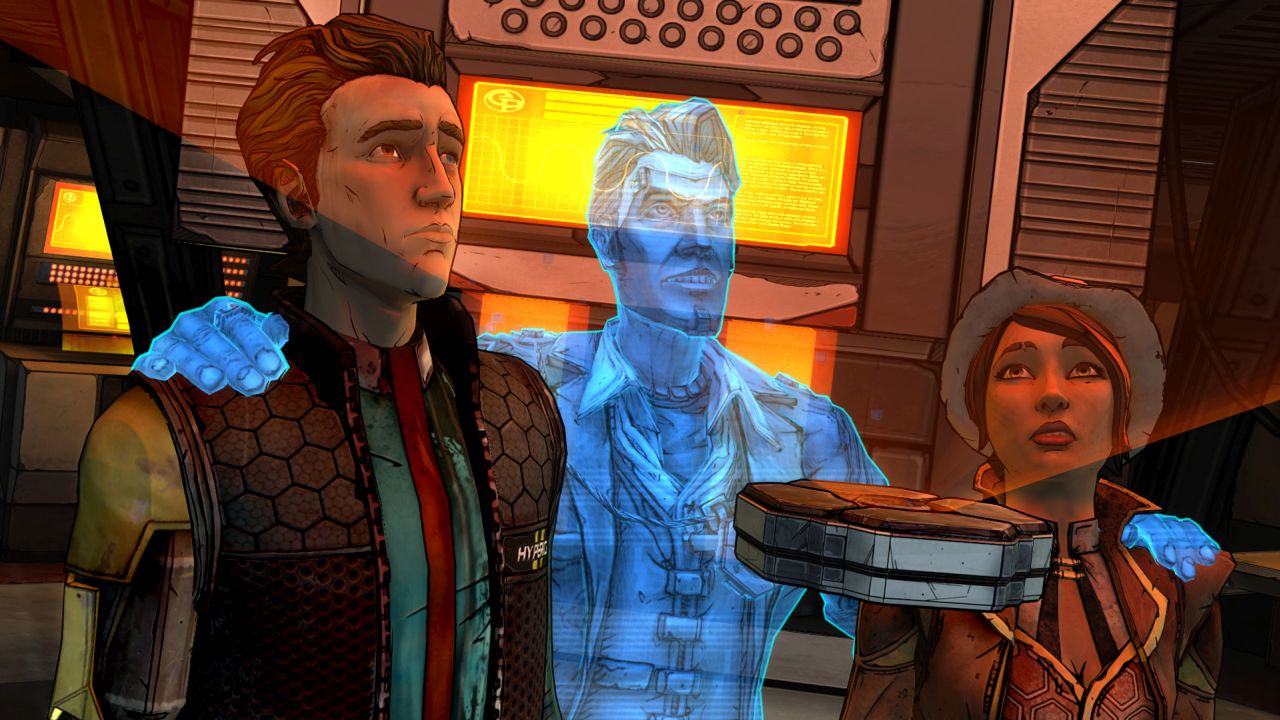 The voice acting in Tales from the Borderlands is quite simply superb. As well as some familiar names such as Troy Baker, Laura Bailey and Ashley Johnson, a large number of Telltale’s celebrated alumni have returned, such as Dave Fennoy, best known as Lee from The Walking Dead, and Erin Yveytte, who played Snow White in The Wolf Among Us. Fans of the Borderlands games will be pleased to note that the characters that crossover into this adventure retain their original voice actor, such as Dameon Clarke playing the infamous Handsome Jack. There were a few moments where the dialogue didn’t quite sound right, but on the whole each character delivered their lines to the standard we have come to expect.

Overall, Tales from the Borderlands is the missing piece of the Borderlands puzzle that we never knew existed. Each of the new characters feels well at home on Pandora and Helios, whilst giving the older generation the respect they rightfully deserve. Combined with a slick graphical style, first-class voice acting and a fast-paced emotional narrative leading to an amazing finale, this game is one of Telltale’s greatest series to date.

A fantastic graphic adventure game that expands the Borderlands universe in ways we couldn't imagine. If you are looking for five episodes of action and fourth wall breaking comedy, you have come to the right place.