After the dramatic events of the previous three episodes, Tales from the Borderlands has returned with several large bangs with Escape Plan Bravo. If you haven’t played the season up until this point, please be warned that there are spoilers ahead.

Still under the watchful gaze of their masked kidnapper, Rhys and Fiona tell the next part of their story, in which they have been forcibly enlisted by the bounty hunter Vallory. Once they have learnt that the final piece of the Gortys Project is being held on Helios, the home of the Hyperion Cooperation, they enlist the help of old friends and enemies to blast into space and retrieve the piece from the office of former boss Handsome Jack.

Like the other episodes, Escape Plan Bravo continues to reveal more about Rhys and Fiona, as well as their relationships with Sasha and Vaughn, who is still absent after being kidnapped. Vallory is still the ruthless dictator, and her cronies are just as spineless. A surprise encounter comes when you are asked to enlist an old friend, but if you say the right words, you can help heal a broken relationship and gain a valuable ally in your fight against the scum of Pandora. What was a surprise was dealing with a somewhat helpful Handsome Jack, but depending on the choices you make, this temporary change in personality may not last for long.

If I had to make one major criticism about Episode 4, it is that the gameplay is slightly lacking this time around, with no real puzzles in sight. The usual quick time events are out in force, with sometimes fatal consequences if you miss one. Each interactive segment varies in difficulty, but it is rare that they do not give you enough time to react, unlike the legendary Dragon’s Lair games from the nineteen eighties. While it is true that a lot of graphic adventure games tend to focus on story, it is a shame that Telltale have felt the need to remove what made their games so intriguing back when they made Sam and Max and Tales of Monkey Island. 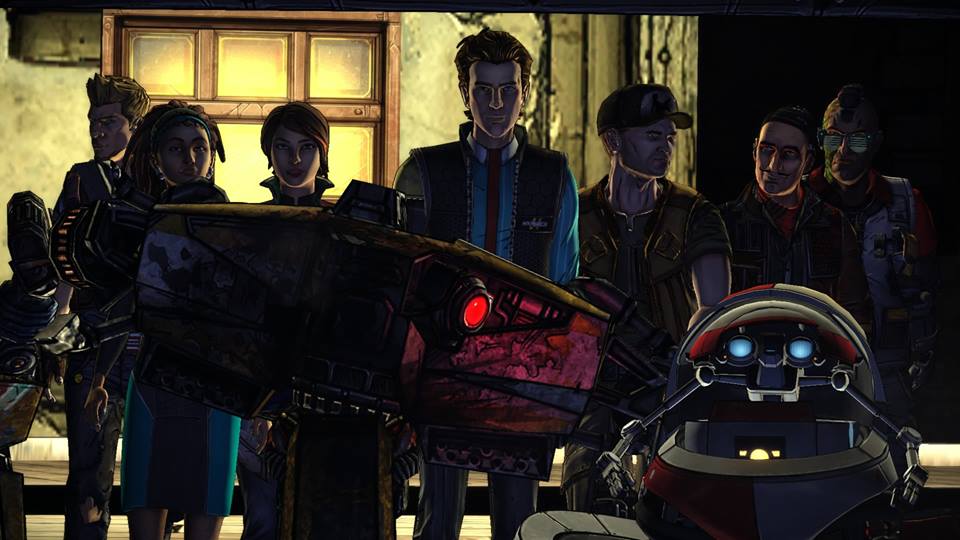 With a team like this, how could they fail?

The branching narratives are as strong as ever, but without the gameplay to back it up, it felts a lot like an extravagant visual novel rather than a video game. That being sad, it is a tragedy to see a long standing character give their life to ensure they reach Helios. The final twist at the end of the episode isn’t entirely unexpected, but it is definitely suitable and brings back one of the most memorable characters in an entirely new role.

A high point of this episode is definitely the introductory credit sequence, in which all the in game sound is muted, and we are treated to an excellent song from Twin Shadow named Back to the Top. The sight of Rhys and Fiona travelling into space with this soundtrack makes it all the more special, and provides a brief glimpse of hope into the dangerous mission that they have got themselves into. The voice acting continues to be high quality, with only slight issues with lip-syncing breaking the immersive experience.

Overall, Escape Plan Bravo sets the stage perfectly for the final episode of Tales from the Borderlands, even if it is slightly on the easier side in terms of gameplay. The narrative and soundtrack prove to be first class, and the cel-shaded graphical style never ceases to look stunning on next generation hardware. Once again, Telltale have proved once again that they are one of the masters of interactive narrative, but if they could their world renown puzzles into the mix, they would have the best of both worlds.

Escape Plan Bravo has a strong story and amazing soundtrack, but lacks the difficulty and challenge presented by the other episodes. Although it has a few problems, it is still a worthy addition to the Borderlands franchise.