After going through demos, leaks and streams of Japanese footage, Super Smash Bros for 3DS is finally here and ready to kick off this installment of the Smash series. As well as being a brand new iteration, this edition of the game is the first ever Smash game designed for a handheld. So, is this entry ready for battle or does it need to spend more time in the gym?

Let’s get the most pressing issue out of the way first, how the game feels. Many fans were afraid that this installment would be as slow and as disappointing as Brawl but let me lay those fears to rest. This game strikes a happy medium between the defensive play of Brawl with the speed of Melee, by having a very fast ground game contrasted with a slower air-game. Characters like Sheik feel straight out of Melee, with super-fast attacks and very little landing lag on aerials, while fighters like Bowser Jr seem to preserve the floatiness of Brawl, if that was your thing. There is someone in the roster for everyone, whether you are a Melee veteran or coming to Smash for the first time, there will be a character to suit you.

Speaking of the roster, Smash for 3DS has probably the best roster of the series with 51 characters to choose from. There are some standout new additions like Little Mac and Duck Hunt Duo, while veterans like Captain Falcon continue to fight the good fight. There are some contentious characters in the roster, like Dark Pit and Lucina and the lack of some fan favourites like Ice Climbers and Lucas have caused some anger amongst long-time fans but thanks to the addition of custom moves, some of these missing characters can be recreated via alternate specials while there is the possibility that some may return as DLC. All in the all, the roster is very broad and has a character to suit everyone’s taste and fighting style.

This isn’t some poor imitation of Smash Bros. This game is the real deal.

Turning to the game modes, I have to say that Smash for 3DS is a bit lacking in terms of content. You have your standard Classic and All Star mode, coupled with the usual mini-games of Home Run Contest, Multi Man Melee as well as the new Target Blast which is an interesting mix of Break the Targets from previous iterations as well as Angry Birds, along with the well-advertised mode, Smash Run. While there have been some well-needed changes to Classic Mode, and Target Blast is a welcome addition, I was honestly expecting a little bit more from the single player modes in Smash for 3DS.

I know asking for an Adventure Mode would be a bit much but some more options would have been nice. As for Smash Run, it does not measure up to the hype and fanfare that it was given by Nintendo. It is basically an incredibly streamlined version of the City Trial minigame in Kirby’s Air Ride, having you run around a maze for five minutes, collecting powerups and fighting enemies from different game worlds in order to prepare for a 1 minute event at the end. The main problem with this as you are not told what event you are going to participate in during the run, causing you to run around like a headless chicken looking for powerups with no idea of what event you will be fighting in at the end. Bad luck if you’ve collected mostly defence points and you are thrown into a race event. That’s 6 minutes of time down the drain thanks to the game not clearly telling you what you were going to compete for.

The other problem is that the small maze that you run around in is pretty dull. You don’t see your enemy players while chasing powerups so you can’t mess up their runs and the only thing that really changes is the challenge doors and which enemies you fight, with only a few of them having any real difficulty to them. It is a mode that you will likely play once, discover how boring it is and never touch again unless you want to complete all the challenges and collect all the Smash powers and equipment. For all the coverage it was given, it is an incredibly underwhelming addition.

As for the game’s customisation options, you can collect alternate movesets for your characters to alter their playstyles. This does a lot to the Smash metagame and only time will tell how viable they are in competitive play but they are an interesting way to change the Smash meta. Unfortunately, it takes a hell of a long time to collect them all so if you are set on acquiring every single custom move, you’ll be playing Trophy Rush many, many times. Also, the introduction of the customisable Mii Fighters is a very welcome addition, giving players the opportunity to bring in any missing characters and kit them out in one of 3 different classes, Sword Fighter, Gunner or Brawler. They are fun characters to play and there is a distinct pleasure in beating up your friend as Professor Oak or seeing a gun wielding Gandhi take out a sword-wielding Desmond Tutu. 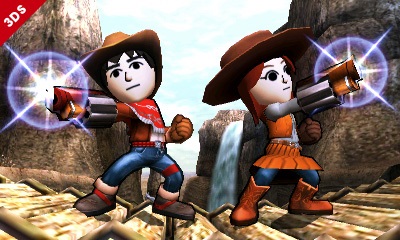 The ability to beat up your mates as your sword wielding, mech suited nan never gets old.

Moving on from the single player, the games’ multiplayer suite is where you will spend most of your time. The local multiplayer is very good, with no lag in most fights, even in places with many connections. Some reviewers have complained of local wireless games suffering from stuttering and constant lag but in my test in a busy pub with many people using their phones and the Internet, I had absolutely no connection errors and games ran buttery smooth. You can expect the usual option of point or stock matches with the ability to set timers and limit the arenas you fight on when you click random. Oddly, the ability to set the spawn frequency of items has been removed, with you only being able to have items off or on.

While many players mostly play with items off, the ability to set how often items spawn was a nice touch and gave you the option to create crazy custom games if you wanted. It is not a major complaint but hopefully, it will be fixed in a later patch. Also, the camera can zoom out too far in 4 player matches which can lead to players, especially on normal 3DSes, losing track of where they are on screen and not being able to see the action clearly. In 1v1 fights, the camera is fine requiring you stay on smallish stages but it can get very hard to see the action if you are in a 4 player game in a massive arena.

As for the online, it is a bit of a mixed bag. In general matchmaking, you have the option of ‘For Fun’ or ‘For Glory’ mode, with ‘For Fun’ taking place on non-Final Destination stages with all items on while ‘For Glory’ takes places only on FD stages with items off. While this clear delineation between serious play and fun matches is great, the fact you cannot pick stages in ‘For Fun’ and that neutral stages like Battlefield and Yoshi’s Island are banned in ‘For Glory’ seems very limiting and reduces the amount of variety in public games. Also, Nintendo’s refusal to implement proper player searching and the ability to friend recently matched players or even add them to some kind of ‘Rivals’ list is incredibly irritating and gates people from repeatedly playing fellow Smashers after a good set of games. Fortunately, when playing with Friends, you have plenty of customisation options but this, of course, requires you having swapped friend codes. 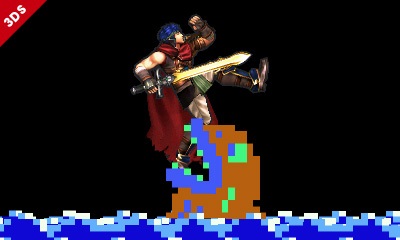 Some of the novelty stages like Balloon Fight lose their appeal after the 2nd or 3rd playthrough.

When you actually get into a game, you are very much at mercy of the game’s netcode. If both players are on a steady connection, matches will play great with there being a rare bit of input delay on some moves. However, if one player has a choppy connection, you are in for a very rough ride. Games can quickly turn into slideshows, with massive lag and constant buffering as the game tries to keep the match going. It is better than Brawl’s notoriously bad netcode but do not play this online if you have a spotty connection. You will save everyone from a lot of frustration.

Super Smash Bros also has a surprisingly robust Spectator mode, allowing players to bet on live matches and even watch replays of specific matches involving certain characters. It would be great if you could specifically pick which match to watch and that you could toggle through your friends’ replays but the fact that there is even a Spectator mode at all is promising for the Wii U version.

Presentation wise, Smash Bros looks and sounds phenomenal for a 3DS game. The art direction is great and characters animate beautifully when in motion. In local and single player, the game runs at a steady 60 fps and the game’s soundtrack is great, comprising of classic tracks and some welcome remixes of popular themes. I’m a bit torn on the game’s menu design, with the Options menu being tucked away in a series of submenus while very rarely used features like Streetpass are placed on the main screen. The game trophies all look great, with many humorous descriptions to read.

As for the game’s controls, they take some getting used to and while the ability to remap buttons is great, the Circle Pad can’t hold a candle to the superior control of the Gamecube’s Analogue Stick. It does the job but don’t expect great precision and you may develop some hand cramps after playing for long bursts. You will suffer from missed inputs and be aware that the Circle Pad is quite delicate so be careful with those side smashes.