Failbetter’s gothic sailing adventure has left the Steam Early Access drydock and is now headed for open water. We’ve taken a look at the preview version but is the complete vessel ready for the water, or is it doomed to end up in Davy Jones’ Locker?

I’ve covered much of Sunless Sea’s core mechanics and gameplay in my preview, so this review will mainly focus on any changes that have been made to the game and my thoughts after returning to the full version. For those who want a quick overview, Sunless Sea is what you would get if you put Sid Meier’s Pirates and gothic horror in a blender, then chuck in a hint of roguelike mechanics for good measure. You play as a zailor, whose goals is fulfil one of your life’s ambitions whilst sailing across the murky Unterzee, a giant underground sea filled with Cthulhu’s best mates. It is a world which is certainly not short on atmosphere, with the game oozing personality from every nook and cranny.

As I mentioned in the preview, Sunless Sea is absolutely rammed full of text. Failbetter Games are the masters of in-game text, with the stories you will read over the course of your tales across the Zee ranging from incredibly funny to utterly terrifying. However, the key word is read. While the prose found in the game is well-written for the most part, there is such a gargantuan amount of it, that it almost feels that Sunless Sea may be better off as a text expansion to Fallen London, rather than a standalone game. Just a bit of music or an action that is described in the Log Book actually happening on screen would go a long way into feeling like you aren’t just reading a gothic novel in a steamboat. Actually seeing lights dancing off the bow or your ship rolling in the waves would be a great touch.

Luckily, the islands that have been implemented in the latest patches do have some very interesting visual designs and do use shipwrecks and environment clues to tell story. Unfortunately, you do have to sail to the very east of the world map to see these areas but trust me, it is worth it. An empire run by simians is all I will say. That is a major difficulty for the team at Failbetter, that if they wanted to fill every island with the quality of prose and content that areas like Fallen London have, the game would not come out for another 5 years.

The light! It burns!

Helpfully, Failbetter have provided a much better tutorial system in the final release of Sunless Sea, having tooltips pop up at certain points to explain mechanics, like ship combat or how to avoid being eaten by drowned horrors. Also, they’ve added a special Captain’s book which appears in your inventory every time you die, giving you more helpful tips if you are really struggling about what to do. As an added bonus, this can also be sold for 50 Echoes (the game’s currency), which is a nice boon to your starting funds. Enemy ship placements have been slightly altered as well, with that pesky pirate cruiser that was the bane of many fledging zailors leaving Fallen London, has been shifted up the map a bit to allow for a gentler trip back to port.

The UI has also been touched up visually and the game has a clear Legacy screen, where you can allot your next zailor’s skills and benefits based on what you did in the last run. Personally, I always go for the one that lets you keep your sailing chart so I don’t get stranded at sea, but you can preserve certain weaponry if you found a particularly potent cannon or a shipmate if you grew particularly attached to them. You can also romance certain crew members which is a welcome addition and makes being marooned at sea all the more gut-wrenching, as you know your sweetheart is waiting back at port. You can also doom London itself in a matter of horrific ways so if you wish to indulge your evil side, you have the ability. 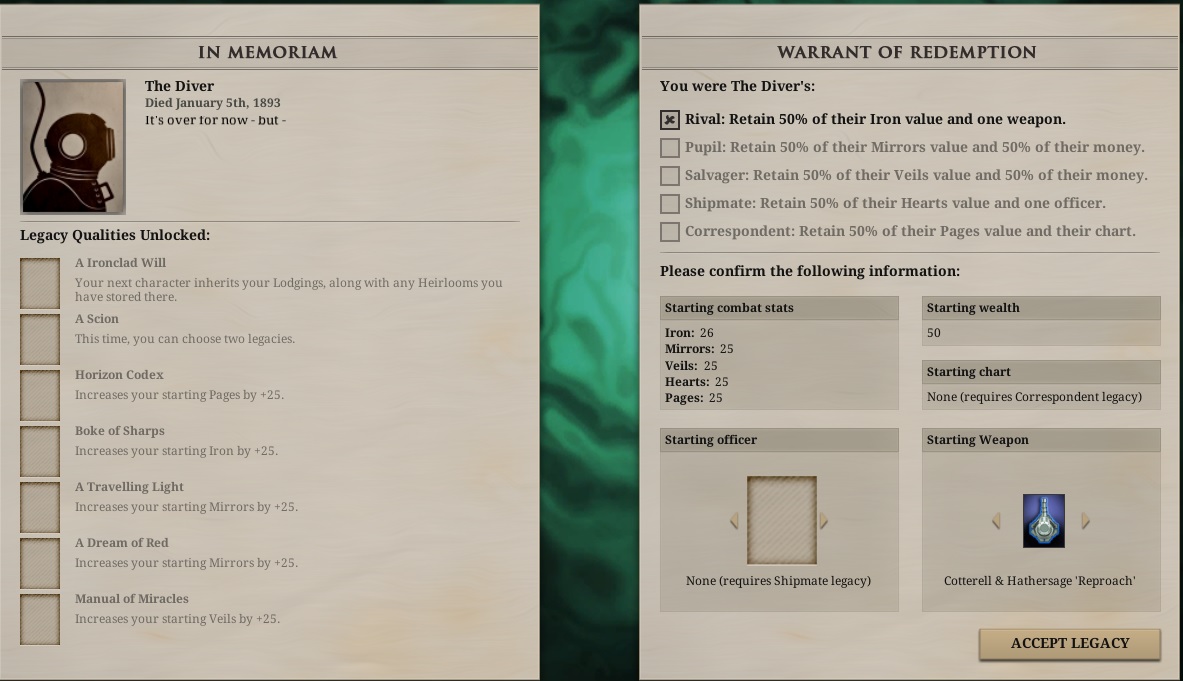 You can’t pass on pieces of eight and a bottle of rum unfortunately.

While the game’s narrative may revel in its distinct atmosphere, other parts of the game do not fare so well. Sunless Sea’s combat still feels underwhelming, lacking any real innovation or clear identity, which is a great shame as other parts are practically drowning in atmosphere. It just feels a bit flat, with weapons lacking any real punch and sounding rather limp when shots land in the water. Running away also acts as an incredibly viable strategy, with most enemies being completely fooled when you simply turn off your ship’s lights and sail round an island. Even when your Evasion stat is low, this technique will get you out of pretty much any nasty situation. While some enemies may have had a visual touch up and certain creatures can now submerge beneath the waves to ruin your day, they are all much of a muchness. You have your sharks, giant enemy crabs, moths and jellyfish and very few really scary creatures. The living icebergs up in the northern areas certainly throw you for a loop when you are sailing around there for the first time but none of the enemies really feel that menacing.

Sunless Sea also has the issue of feeling empty rather than isolating at times. When you are on certain stretches of zee, rather than there being an intense feeling of dread or the anxiety that you may be sunk at any moment, you just feel bored sailing through a blank bit of ocean. This stretches back to the earlier points that some areas of the Unterzee vary in quality so much that it can feel like that some areas have simply been bolted on as filler to make the world map larger, rather than being made to really add to the world. Fortunately, these moments are few and far between, when the game throws adverse weather conditions and randomised narrative events at you, but there is the occasional moment where you sail through the same foggy patch of blank ocean where tedium sets in, instead of terror.