If you ever survived of a plane crash, what would be the first thing that you would do after such as traumatic event? Instead of calling for help, if you’d join with a group of adventurers to defeat groups of legendary monsters, then you will feel right at home with Stranger of Sword City. Originally released back in 2014 for the Xbox 360 exclusively in Japan, this dungeon crawler has now been ported to Xbox One and PS Vita, as well as receiving an English script translation and all new content for its western debut.

During the first few minutes of Stranger of Sword City, you witness several news reports regarding the crash that your protagonist has been involved in. When this is over, you awaken in a world filled with fantasy creatures, terrifying monsters and magical weapons. After discovering that you, along with anyone who crosses over from Earth have supernatural abilities in this new world, you join together with a group of fellow survivors who are known as Strangers to the general populace. Taking inspiration from other dungeon crawlers such as Etrian Odyssey, you design your primary character before the game begins. After this, you spend almost the entire adventure in first person view, which makes your choice seem slightly redundant. As time goes on, you can create new party members from pre made designs to use as your own personal army. While the customisation process for the species and vital stats for each character can be heavily modified, the amount of options for changing your physical appearance for your allies and protagonist is severely limited. Instead of allowing you to interchange clothes and hair at will, you are instead presented with a small set of fixed templates such as samurai, mages and sword wielding warriors. 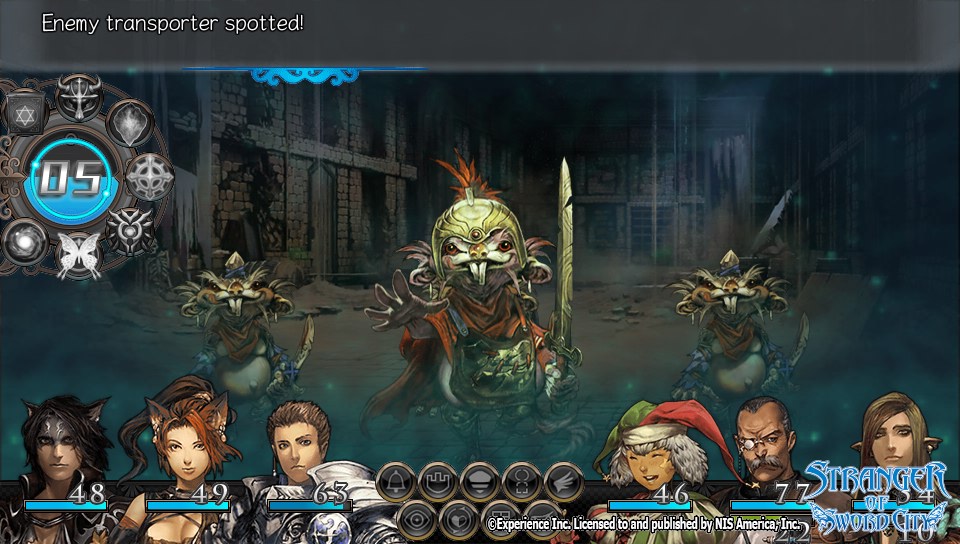 One of the selling points for the international release is the addition of a new art style for the characters and enemies. The original art style is reminisct of dark fantasy used in games such as Alice Madness Returns , and it carries over to the backgrounds and dungeon aethestic. The optional new look is closer to traditional Japanese manga styled graphics seen in titles like Hyperdimension Neptunia and Disgaea. While this is an excellent idea in theory, it falls short of the mark within Stranger of Sword City. This is not to say that the new visual style is bad, because that certainly is not the case, but when placed against the backgrounds the two different styles of artwork unfortunately do not blend together as well as the developers intended. The original artwork was already in high definition because of its earlier release, and looks just as good when presented on the Vita’s high resolution screen, or when displayed on the PlayStation TV. If you were expecting a full translation of Stranger of Sword City, I am afraid you will be slightly disappointed, as there is no English dub track available for the game. Speaking of the Japanese voice acting, it is a high quality vocal track, especially during emotional scenes with characters like Riu and Kyo who are with you through the majority of the adventure.

When you leave the city areas of the game, you are tasked with entering the many labyrinths that populate the world map. These are known as Mausoleums and are filled with the usual array of traps you would expect from a dungeon crawling RPG such as spikes and pitfalls. Each of the labyrinths is based around a certain theme such as a woodland or a snow covered wilderness, but unfortunately there are no puzzles within each of the locations which take advantage of their unique characteristics. Instead of seeing the usual spikes and pitfalls present in every dungeon, it would have been nice to see a puzzle involving a fallen log, or an icy wind preventing your passage through an area until you have blocked its path. Although each of the locations have been given a boost in resolution, the background graphics for each of the dungeons is distinctively bland, which is a shame given the detail which has been put into the characters and the user interface.

While wandering through the labyrinths, you will encounter a variety of enemy monsters such as dragons, hopworms and hydras. After a while, you will meet legendary creatures known as Lineage types that drop powerful talismans known as Blood Crystals. These items grant super-powered abilities to your characters, such as the ability to immediately exit any regular fight. If you are looking for a challenge, Stranger of Sword City will definitely suit your needs, but not always in the way you might expect. While not on the same level as Dark Souls or Rogue Legacy, there are several moments where the difficulty spikes from relatively easy to nigh on impossible, particularly in the tutorial fights where you are alongside Riu. Within the space of two encounters, a Level 6 horde of monsters were quickly followed by a Level 16 group, which is a bit of a shock when your protagonist has only just reached Level 2. While a challenge is always appreciated, a little bit of balancing to ease the player into the game is not too much to ask from a RPG that will take upwards of 40 hours to complete. 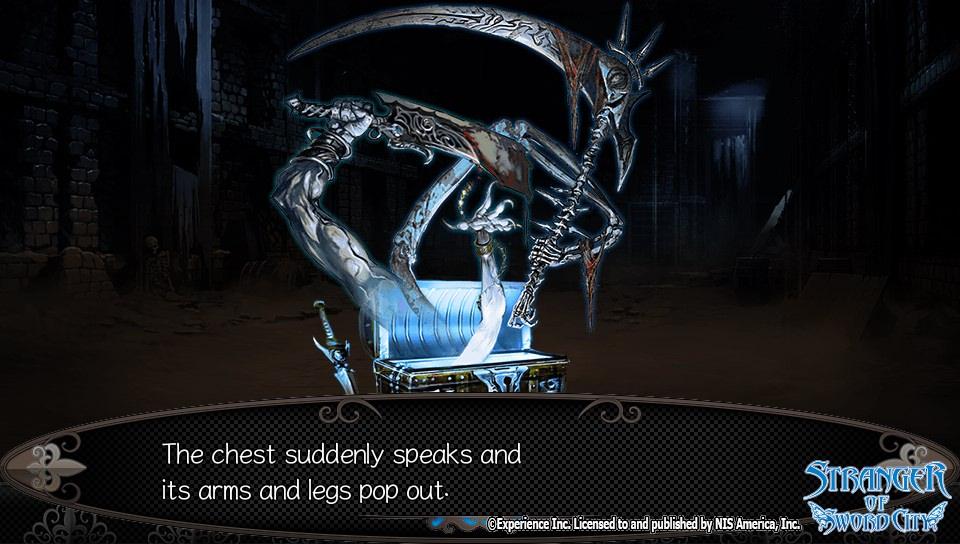 Random assortments of treasure can be found around the map, but the real benefits come from using the Invisibility Stone, which allows you to hide in certain rooms in the dungeons to reveal hidden treasure chests. These hold some of the most valuable items and weapons, but in order to obtain them, you will need to defeat a set of slightly stronger enemies. It is entirely optional to do this, but you’ll be certainly be grateful if you do, especially when you come to some of the harder boss fights later in the game. Even on the lower difficulty level, Stranger of Sword City offers the kind of challenge that fans of dungeon crawlers have come to expect, so the experience will not be especially diluted if you decide to take the easier route.

Overall, Stranger of Sword City is a dungeon crawler that does have many interesting ideas such as the hiding mechanics, but unfortunately the challenging gameplay is let down by the lukewarm dungeon design and the port exclusive optional art style. While the characters have a well-built system to set their strengths and weaknesses, the lack of making each fighter’s appearance unique makes the journey slightly less exciting.

While it succeeds in making a challenge for the player, Stranger of Sword City feels aesthetically bland, and lacks the intelligent dungeon design that fans of the genre have come to expect.