As the Dozer rumbles towards Aztec City, it brings with it yet another post-apocalyptic RPG with permadeath, roguelike elements and procedural generation. Is Skyshine’s Bedlam yet another cookie cutter indie to throw in the nuclear landfill or is this journey to the Promised Land worth taking?

Story is not the focus of Skyshine’s Bedlam, it prides itself on building a dense world of rogue AIs, atomic duststorms and marauding bandits out of set story moments which occur whenever you reach a new destination. There is a thread bare plot, which has you escaping the overpopulated megacity of Bysantine to reach the rumoured paradise of Aztec City, located on the other side of the giant blasted lands known as Bedlam. Upon escaping the city in your giant armoured RV called the Dozer, King Viscera of Bysantine gives chase to recapture the Dozer and slaughter all those who tried to escape with you. After leaving the gates of Bysantine and picking your first destination, the main plot is completely forgotten about, besides the game warning you that King Viscera’s troops are out looking for you in the wasteland and sending more marauders to put your heads on spikes.

Thus begins your journey across Bedlam and the main feeling that permeates your trek across this land is forgettable. All the constituent parts in Skyshine’s Bedlam are taken from other games and then bolted together like some malformed cyborg, in order to capitalise on the success of said games. Skyshine have clearly taken many nods from FTL, with their map screen, upgrade procedure and way of delivering story being incredibly similar to the spacefaring RPG with roguelike elements where you outrun a massive force of enemy combatants. The combat is somewhere between the Banner Saga (it runs off the same engine), Fallout Tactics and XCOM, with there being a liberal sprinkling of designs from every post-apocalyptic piece of media for the past 30 years. Now, it is perfectly fine to take elements from other games and incorporate them into your own, augmenting certain aspects of previously used mechanics and giving them your own spin. What isn’t good, is when you take the mechanic and either not change it at all or alter it so it is somehow worse. 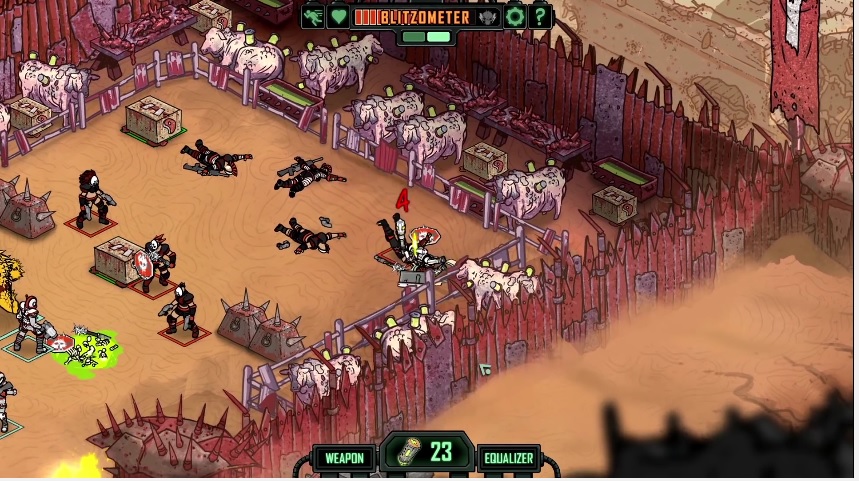 Expect to see many squad wipes in your first few runs.

Let’s take combat for example. Upon reaching certain travel markers or venturing out of certain points of interest to gather fuel, food or people to join your jolly band of wasteland pilgrims, you will be entered into a battle. You get the choice to select up to 6 soldiers to go into battle, with players receiving less resources if they take more than 3 troops into battle at once. Having chosen your warriors, you are then launched into a randomly generated battle map with random player and enemy placement where you must dispatch all of the enemy units before they kill you. The main problem here is you cannot pick where your units are placed, being it down to the computer to randomly assign your unit’s placement on the board. This means you can have your sniper right up the corner surrounded by 4 shotgunners, meaning that unit is basically a right off and you’re going into the fight with a man down already. Your squadmates are commodities in themselves, being way more precious than power cells or meat, so losing one to complete bad luck is asking for people to be sent off to Bedlam.

In a battle, you only get two actions per turn, meaning you have to balance between attacking, retreating or moving your units into the correct position for a strike next turn. Supposedly, this short action counter is to make a battle more like chess whilst also increasing the speed at which you finish a fight. If I’m honest, it is more frustrating than anything as it limits your forward planning as you can’t effectively chain party manoeuvres together to clear the board. There is also the looming presence of the Blitzometer, which gives enemy units a 3rd action and a shield to soak up damage, further emphasising that clearing out a board quickly is the way to go. However, the bare bones nature of combat means that more often than not, early and even mid-campaign battles are just a mad scramble rather than a carefully planned out attack. The class system in Skyshine’s Bedlam is just sniper, shotgunner, melee user and sub machine gunner, with the only difference being that they have different weapon types and movement ranges. There are no active skills to unlock, new weapons to equip to your soldiers or any reason to get attached to your retinue, as every soldier in a class is fundamentally the same. The only thing that changes is that killing 3 enemies makes a unit a veteran, which just gives them a red uniform and more damage. No additional skills to speak off, just more damage.

There are special ‘elites’ to recruit, these being special warriors with a distinct art style, a bit more health and a high damage output. Again, no unique skills to come into play here, they are just bigger and burlier bullet sponges. There are special Dozer Weapons and Equalizers that you can activate in battle, acting as either strong attacks or buffs to your squad in order to turn the tide of battle. They are randomly placed around the map, meaning that trying to get a specific Equalizer can mean grinding the same areas over and over until you trigger the right event. In the time it has taken you to finally unlock this Equalizer, the threat level has risen to Bedlam, meaning that you will have to face a small army at every combat encounter and can mean instant death if you take the wrong path. None of this adds any real depth or satisfaction to Bedlam’s combat or exploration system, it just becomes an overly long slog as you try to get the requisite end game equipment to finally reach Aztec City with your Dozer intact.

Like FTL, Skyshine’s Bedlam has a form of meta-progression, where new Dozers are unlocked based on finding special NPCs around the map or clearing a campaign under certain conditions. In its current state, simply reaching Aztec City is a chore as luck is such a key part in a successful run that you need to be praying to RNGesus at every event if you are to reach the city alive. 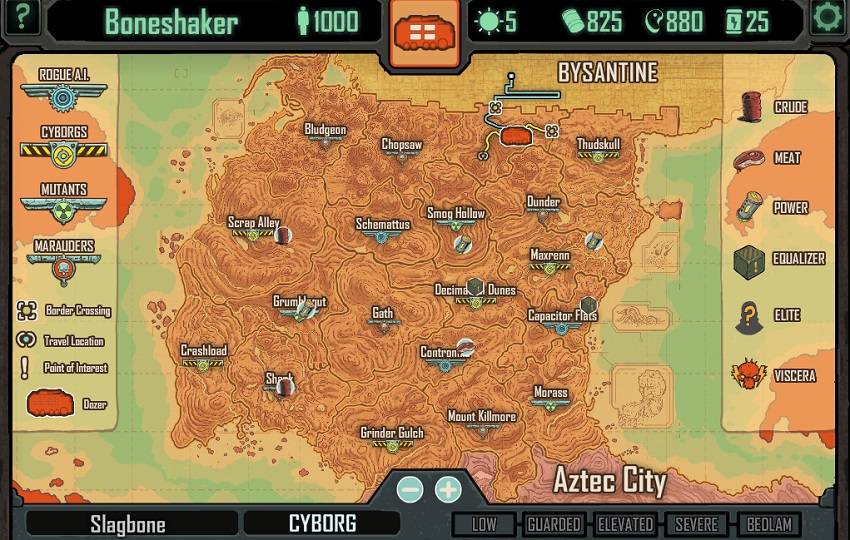 Trying to find a Little Chef in Bedlam is a bloody nightmare.

Presentation wise, the character portraits for individuals range from impressive looking marauder warlords to horrific mutants and monsters. I’m not just talking about the actual monsters in game, some of the human squadmates look genuinely awful. The cel shaded character models in battle animate well, with people dissolving into puddles of radioactive goo or having all the skin shredded off their bones with machine gun fire. Besides the unique elite units, all characters in a shared class look the same, even having the same veteran colours and weapon designs. Just some slight visual difference between characters or even some flavour text while moving units around would give your squad a greater sense of personality. At the moment, they just feel like faceless goons being fed into the meat grinder. Sound wise, the BGM is what you’d expect with a mix of synths and guttural tracks for the more mechanical and mutant battles, while the Wild West guitar twangs in the background for everything else. The sound design is to be praised though, with enemies screaming in exquisite agony when being set on fire and weaponry having a distinct thunk to each hit or shot.

However, for all the gripes and odd design choices that are in Bedlam, Skyshine seem incredibly determined to make their game a success. They have already announced a patch to fix some of the problems with battle map generation, as well as toning down the initial difficulty curve to make the first few weeks on the trail more tolerable. The Steam forums are active with the devs asking for possible changes to elements like the meagre turn count and adding great squad customisation but it does beg the question, why was none of this thought about during development? Skyshine had this on Early Access and had this backed on Kickstarter, it seems that not a whole lot of attention was made to balancing mechanical interactions in order to make the game greater than the sum of its parts. The good news is that they do want to make Bedlam a fun as an adventure across a twisted wasteland can be, but it just isn’t that enjoyable in its current state.

In the increasingly overcrowded indie market, simply parroting tried and true mechanics is no longer enough. There must be some original flair or interesting idea which ties all these disparate parts together to create a satisfying whole. Skyshine’s Bedlam is an example of where this pinching and melding of ideas just does not work to create something which is currently worth playing. The developers are putting work in to really make their game something special, but this should have happened before launch, not after.

Skyshine's Bedlam is so caught up in using all these mechanics from the indie toolbox, that it forgets to forge its own identity as a game. A ultimately shallow RPG, which has nothing as of yet to establish itself as a diamond amongst the rough wastes of the indie market.