We know the gist by this point. A new borderlands 2 DLC is released, we explore some new realm of Pandora, meet a zany new character, find some new guns and kill a lot more things. Sir Hammerlock’s Big Game hunt is no exception, but can the promise of danger and bristly facial hair top Torgue’s bulging musculature?

This mini-adventure has the vault hunter going on a weekend trip with the gentleman Sir Hammerlock as they trek to Aegrus, a swampy expanse mostly within a giant cave. Immediately the theme of the expansion is apparent. New types of enemies and creatures roam across the open terrain, ready to be murdered and brutalised with things that go boom in many different ways. Within a a few moments you are tasked with clearing the local hunters lodge to act as base camp for your expeditions into the wild. You are then also contacted by Professor Nakayama, Handsome Jack’s biggest fan and first time arch-nemesis.

All hunting takes is a large gun and a winning smile

Unlike Mr Torgue’s Campaign of Carnage, this foray into the wild green yonder doesn’t rely on Borderlands unique sense of personality to entertain alongside the gun-play. Instead the game expands its base by throwing a healthy plethora of new beasties and baddies. Most of the side-quests revolve around taking down a unique band of critters that must be tracked down and beaten mercilessly. This focus on bigger and badder creatures that are either mostly new or returning with a twist, makes the gameplay feel fresh and more challenging. The new Witch-doctor enemy stands out as a great example. It comes in a variety of flavours be it fire, electricity, slag and vampire and will always be the biggest threat within a group of savages, another new type of enemy separate from the usual bandit ilk. They not only have reams of health and a nasty habit of causing damaging AOE attacks, but also level up all savages within range. This gives all savage encounters a nice twist that forces vault hunters to change tactics on the fly due to a health stealing vampire or a tornado sweeping across the battlefield. Enemy levels have also been given a boost, with the starting level being around 35, giving a little extra challenge to anyone who has found it lacking.

This is not to say that it is without any form of charm. Professor Nakayama’s fan-boyish rants are entertaining and anyone who wanted more Clap-Trap will be in stitches, just don’t expect the same amount of dialogue or character interaction like the previous excursions. This outing is purely about killing in as many glorious ways as possible. This of course involves a whole new plethora of loot and skins to be picked up by the greedy. The game even ends with one of the biggest piles of loot seen in Borderlands history. Make sure to bring some friends along when for the last mission, there is just too much loot for one person, and you can’t take all of it with you. 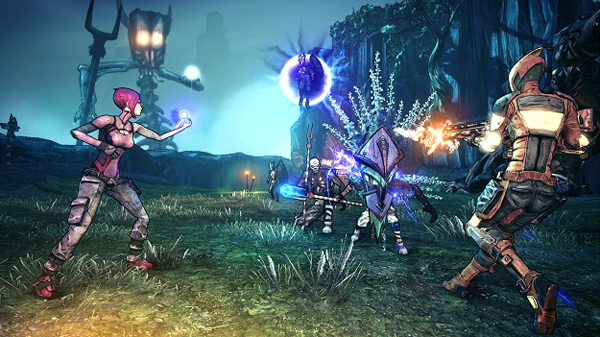 Aegrus is a palette of new colours to the Borderlands experience. The majority of the landscape is either within the plains of Hunter’s grotto, a dull green expanse within a massive cave which let’s in a surprising amount of sunlight. The grotto is host to all kinds of fauna such as the Borok’s and Drifters that cross great distances in seconds. The other main area is Scylla’s Grove, a dank swamp filled with savages and Scaylions, a weirdly mutated scorpion wannabe. The area twists around huge trees and underground passages. It gives a great impression of how far removed it is from the rest of Pandora and is something any vault hunter who craves variety should meander through. Invisible walls and hit boxes seem to be an issue however, with vault hunters snagging on geometry while running up stairs or rock outcrops. While not a game-breaker it certainly stops the flow of gameplay and can get rather annoying.

The only way is not by foot. A new hovercraft, reminiscent of Captain Scarlett’s sandskiff, drifts across the swamp water with a variety of weapons. Want a flame-thrower on it? It can do that. Want it to shoot out corrosive balls or lightning instead? It has you covered. There is an issue however with inconsistent spawn points. Vehicle spawns, lovingly termed as “catch-a-boats” a rarely where they will be needed most, instead lying in the middle of a swamp, far from where you will be left vehicle-less. 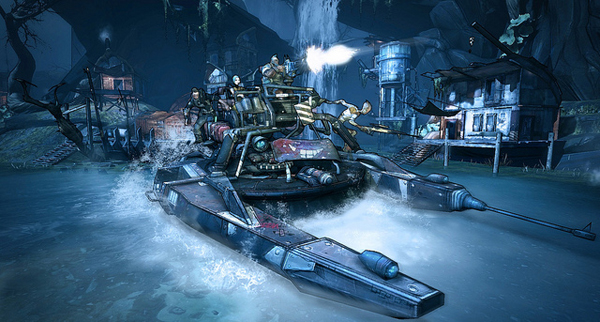 Great for whizzing round the bayou

While it lacks the charm and humour of it’s two predecessors, Captain Hammerlock’s hunting expedition is a worthy trip to take. The additions of new enemies and behaviours is a breath of fresh air, instead of the usual bandits and skags. Instead of trying to top Mr Torgue’s loud and entertaining personality, Gearbox focused on the shooting and making fun enemy encounters, making this a fun and dandy piece of DLC worth your money for the 6-8 hours it will take to reach it’s conclusion.