Shadowrun Returns is the first major Kickstarter game to be released since crowdfunding became popular amongst developers wanting to try something different. Bringing back the tabletop series to the virtual world, is it a good game with old-school sensibilities, or can you not teach old dogs new tricks?

What is most apparent about Harebrained Schemes steampunk RPG is that you aren’t truly buying a game, but more of an investment – Coming initially with the relatively short “Dead man’s switch” campaign, it is a promise for a near infinite amount of content that is already being created by the community. Thankfully the tools they have to work with are extremely well created.

Dead Man’s Switch is both an enjoyable six to eight hour experience, and a exhibition of what the engine is capable of within the usual RPG framework. At the start of a campaign you can create a character to inhabit a post-2050 world which is now populated by a bevy of mystical races, including Elves, Orks and Trolls. On top of that you also select a class, including the intimidating sounding Street Samurai and matrix hacking Deckers. The six classes range from the archetypical warriors and mages, but the skill point system, dubbed ‘karma’, is flexible enough to let any character wield all types of weapons. It allows for easy experimentation and trying out new roles. This is reinforced by having to create a new character for each campaign, leaving it wide open to those who want to try a different approach.

Each Filth Covered Road Tells A Story, Imparted By The Wonderful Artwork Brings It To Life

After the set-up stage you are thrust into the world of the Shadowrunners, individuals who take on all manner of dodgy jobs to make ends meet. Sometimes that involves killing a few gangsters, and other times it is all about committing a little corporate espionage. The hand-drawn, isometric environments convey a better sense of atmosphere than many fully 3D games. Being on the tight budget of a successful Kickstarter project, Harebrained Schemes have eeked out every last drop of style they could in their tilesets, creating a neo-noir world drenched in neon and shadows.

This is continued by the games excellent writing. Each character is injected with personality in a handful of lines, making the storyline a fun progression of characters and locations. Occasional typos pop-up, but those will most likely be patched out as the game is inevitably updated by the studio. With no voice-acting to speak of and plenty of dialogue choices based on stats and race it is very reminiscent of the Baldur’s Gate series. These stat-gated options however are the ‘choices’ that really matter. The bulk of dialogue changes nothing, adding purely to the experience of playing a role, rather than defining it. This is a bit disappointing given the series open pen and paper roots, but pays off with a focused, well paced narrative. 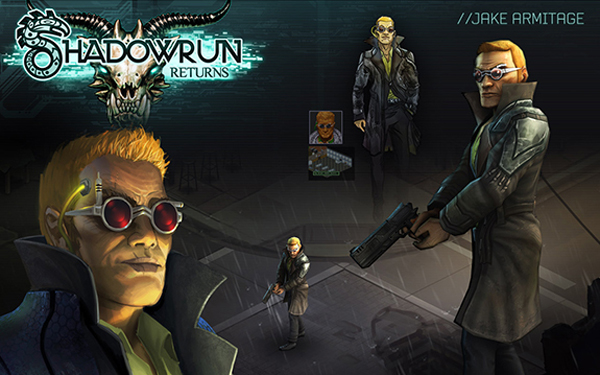 The First Of Many Companions To Come And Go

A minor downside is the music. The score is understated, sounding very reminiscent of Deus Ex: Human Revolution. Sadly however it repeats frequently and becomes tiresome and annoying after a while. Longer track length or a few more for the sake of variety would have gone a long way to alleviate this small issue.

Outside of soaking in the world and its inhabitants combat plays a prominent role. Being very similar to both XCOM and Omerta, the more violent approach revolves around hit percentages and hunkering down behind cover. Aided by a handful of supporting characters which come and go over the story, you take turns popping of rounds and magical projectiles tun after turn. Each of the weapons have their own role to fill, with none standing out as better than any other. Going the less direct route of magic, or jacking into the matrix, ss just as enjoyable as gunning down a group of other runners. While the system doesn’t offer a great amount of depth, it has an enjoyable amount of variety that is helped by how easy it is to mix and match skill sets.

Equipment is kept to a minimum, with little inventory management and almost no stats to compare. While a few pieces appear here and there, the majority of equipment is bought from vendors. Side-quests are few and far between, so hunting for a rare drop or reward is a fruitless activity.

Race Limits Stat Growth In Certain Areas, But Every Path Is Always Open

Shadowrun Returns comes with the editor that the developers used to create the Dead Man’s Switch campaign. For those who have used other engines like Unity or Unreal will feel right at home, but may be intimidating to those who haven’t delved into this side of gaming. If you have ever waned to put your pen and paper scenarios into the computerised world, here is your opportunity. The tools are robust and anyone with the right amount of patience and imagination can create narrative experiences on par with the developers own. With player made stories already coming out it is only a matter of time before someone exceeds the core game experience.

Shadowrun Returns brings back a few older ideas, which many may have forgotten existed. An isometric world and a back to basics ideology that cuts away much of the fluff that has been placed around more recent RPG systems. Hacking the mechanics down to just what is needed, and making sure they are of the best quality they could deliver, Harebrained Schemes has shown that crowdfunded games can deliver excellent experiences on a tight budget. For the relatively small price, Shadowrun Returns is the future offer of hours of entertainment past the ‘official’ scenario. Whether it is worth playing or not is down to the community, and yourself.