Nobody really agrees on when the Resident Evil series jumped the shark, but there is no denying that at this point it has well and truly lost its way. Even Capcom seem to realise this, if their rerelease of Resident Evil Remake and the recent announcement that they will be remaking Resident Evil 2 from the ground up. Capcom have realised what many of us did a while ago; they’ve forgotten what made Resident Evil great. Well kudos Capcom, the first step in solving a problem is admitting that it exists in the first place. Returning to the old and most beloved titles in the series is not only a way for them to cash in on some of that sweet nostalgia money, but it’s also a chance for them to rediscover what made the older titles such classics. Presumably to that end, Capcom have given Resident Evil Zero, the Gamecube/Wii exclusive prequel to the series a HD remake. So how does the old girl fair?

Before we get anywhere, I’m going to address the massive zombie elephant in the room. The dialogue and voice acting is horrendous. Of course it is, this is a Resident Evil game and they’re famous for it, especially the early titles in the series; Jill sandwich anyone? Thankfully it plays well into the campy vibe that the story brings with it, to the point where you can almost convince yourself that it’s deliberately this bad.

However, and I’m sure I’ll be locked in an insane asylum for saying this, the plot is surprisingly good. I mean we’re dealing with Resident Evil here, a series whose plot is such a ridiculous mess of contrived villains, evil corporations and viruses that even the writers had no idea what the hell is going on by the time Resident Evil 6 came out. Being a prequel gives Zero a little bit of an advantage in this regard though, as it can feed off of the pre-established story from the original title. We follow the story of Rebecca Chambers, a rookie member of STARS and Billy Coen, an ex-marine on the run from the law after being accused of crimes he didn’t commit (que the music). Rebecca and the STARS Bravo team are sent into the Arklay mountains to investigate a series of cannibalistic murders, whereupon their helicopter crash lands and the majority of the team instantly becomes air-delivered takeout for the resident zombie population. Rebecca heads to a nearby train which is mysteriously stopped in the middle of nowhere and meets up with Coen. The story is told not only from the perspective of our plucky heroes, but also via cut-away cutscenes showing us the roles of well-known series antagonists Albert Wesker and William Birkin in the incident. It’s all very camp, but the pacing of the story is well-handled and the mystery surrounding the outbreak, the weird leech guy and Umbrella is all slowly but skilfully unfurled in front of you. 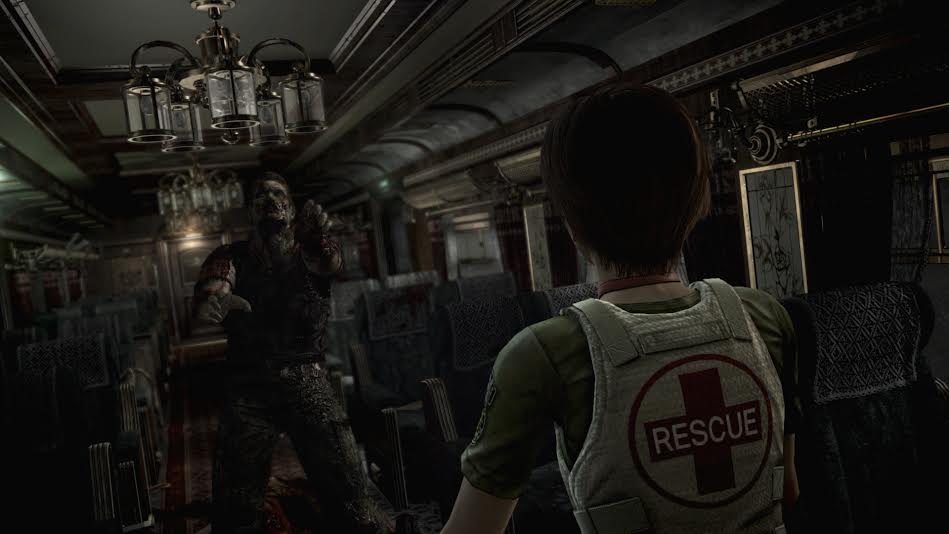 There is no dancing around the issue though, Resident Evil Zero came out in 2002, and even then the reviews were noting its outdated mechanics. So how does Zero hold up in the far off future of 2016? Surprisingly well, especially thanks to the new control system that has implanted. You’re still stuck with fixed-camera angles, for better or worse, but you can at least switch to a more free-flow movement system instead of the traditional tank controls.

The vast majority of your time will be spent traipsing around the world looking for the right key to the right door, with some puzzles which require a little more thought sprinkled throughout. It’s your basic Metroidvania-style of gameplay, with keys instead of new abilities opening up more of the map. Given the level of hand holding present in the majority of games these days, it’s refreshing to dive back into the world of Resident Evil, where you’re actually required to figure things out on your own every now and then.

Combat is clunky as hell, but that was always the point of combat in the early Resident Evil games. You have to pick your fights and use the right tool for the job, because you’re not Rambo and you can’t just run in guns blazing. Fighting zombies and other slow moving enemies is fine, but it can be very difficult to avoid taking at least a few hits from the faster foes like the Cerberus dogs and Eliminator monkeys. Yes, you heard right, Eliminator monkeys. It has zombie monkeys; your search is over. The fixed-camera angles can exacerbate the issue in fights too, when you’re required to shoot an enemy during a specific telegraphed moment, such as when the dogs leap in the air; not so easy when you can’t see the kung fu dog flying at your face until its already there. Still, it all adds to the tension and it does make these rarer encounters more of a traumatic event to overcome, rather than just target practice.

There are some hangs ups that can’t be ignored or waved off as intentional though. The removal of the traditional box storage system, replaced by simply dropping stuff on the ground is a particularly asinine change. Instead of having a convenient storage location for all of the quest items and herbs you can’t fit in your inventory, you now have to leave them lying on the floor, scattered around the mansion like an extremely messy antique dealer. Or if you’re vaguely sensible like me, you’ll just carry everything back to the main hall of the mansion and dump it there, making it look like the Umbrella Training Facility is having a jumble sale. 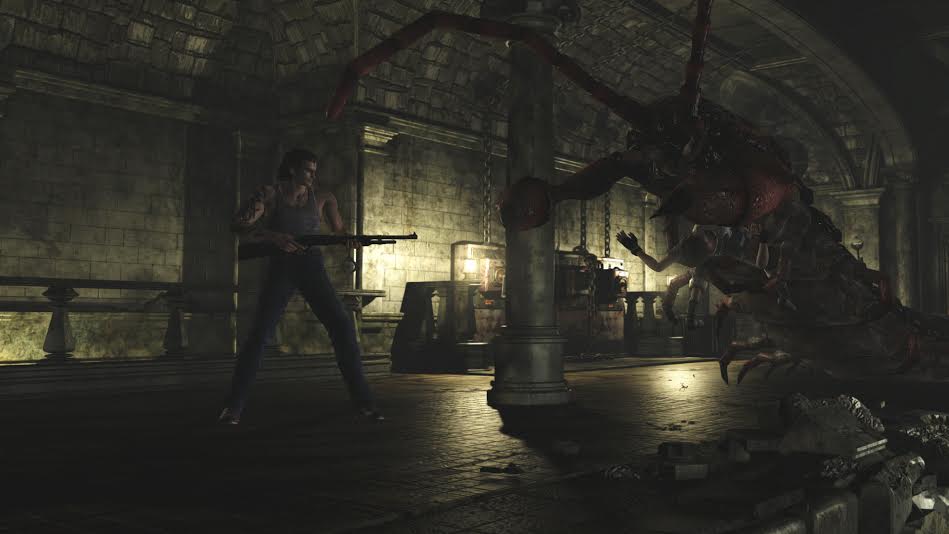 Another irritation, though this is more of mainstay problem of the entire Resident Evil franchise, is the massive fuck you moments it throws in your face. Given how vital it is to have the right weapon for the job, the game does an abysmal job of allowing you to prepare for some troublesome encounters. Take one section midway through the game where you have to retrieve a key from inside a weird cage; one person must operate the doors whilst another goes inside. It’s safe to assume the person who goes inside is going to run into some trouble, so I packed gun and some herbs. Then boom, all the trouble as two hunters are dropped into the room with you. I could almost hear the game say ‘I hope you brought your grenade launcher along, because if not then fuck you’. Mercifully, there is usually a save point before these kinds of events, but the trial and error nature of some encounters almost guarantees your death on the first attempt.

Visually, Resident Evil Zero looks pretty good. You’re not going to be tricked into thinking this is a new release, but the old girl has scrubbed up well and the transition from 4:3 to 16:9 widescreen aspect ratio helps to bring it into the modern age. Textures and character models have been updated and they give Zero a new lease of life, though Rebecca’s new look is a little bit too blue-eyed and baby-faced; I get that she’s supposed to be a rookie fresh out of the academy, but here she looks like she’s fresh out of anime high school. The dolling up process has been a little less favourable on the pre-rendered cutscenes though, with look very grainy and are plagued by visual artefacts, especially in dark areas. Even the door opening cinematics show this issue, with any solid black areas looking extremely poor in cutscenes, but fine in gameplay. I suspect that it was a lot more difficult to adjust these pre-rendered cutscenes and that the developers have just done the best they can, but it’s an odd state of affairs when gameplay looks better than the cinematics.

Resident Evil 0 was the last of the old guard, before Resident Evil 4 stomped in with its fancy new combat and camera system, taking the series down a more action-orientated route. Whether you’ll enjoy Resident Evil Zero really comes down to whether you can accept its old-school combat and camera angles or not. Old school fans of the series should definitely pick this up, but for those of you who jumped on the crazy train at Resident Evil 4, the clunky controls might be a bit much for you to take in. Beyond that, what we have here is some of the highest-quality camp, cheesy, nostalgic, zombie-infested Metroidvania and I bloody love it.

Capcom have injected the T-virus into Resident Evil Zero and brought it back to life. The HD upgrade looks great and the gameplay is as fantastic as ever. A few hang ups that come with reanimating a long dead corpse, but overall a sterling effort.