Rayman Legends is the follow-up to the critically acclaimed Rayman Origins from back in the yesteryear that is 2011. Originally developed as a Wii U exclusive, Ubisoft decided to delay the title and make Rayman Legends a multiplatform title, and it’s a good thing they did too or us Xbots and PSfanboys would have missed out on one of the greatest 2D platformers ever made.

There isn’t much plot to be discerned from Rayman Legends, with pretty much everything being explained in a very abstract cut-scene at the start of the game, but we’ll do our best to explain. So the story goes that it’s about a hundred years after the events of Origins and everyone in the Glade of Dreams is fast asleep as usual (you think they’d learn their lesson and post sentries or something to stop the bad guys sneaking in but oooohhhhh no). Naturally the bad guys rock up in their evil flying machines and mess the place up something proper. A load of Teensies, the little blue dudes with big noses, get kidnapped and it’s up to Rayman to do his best Liam Neeson impression. 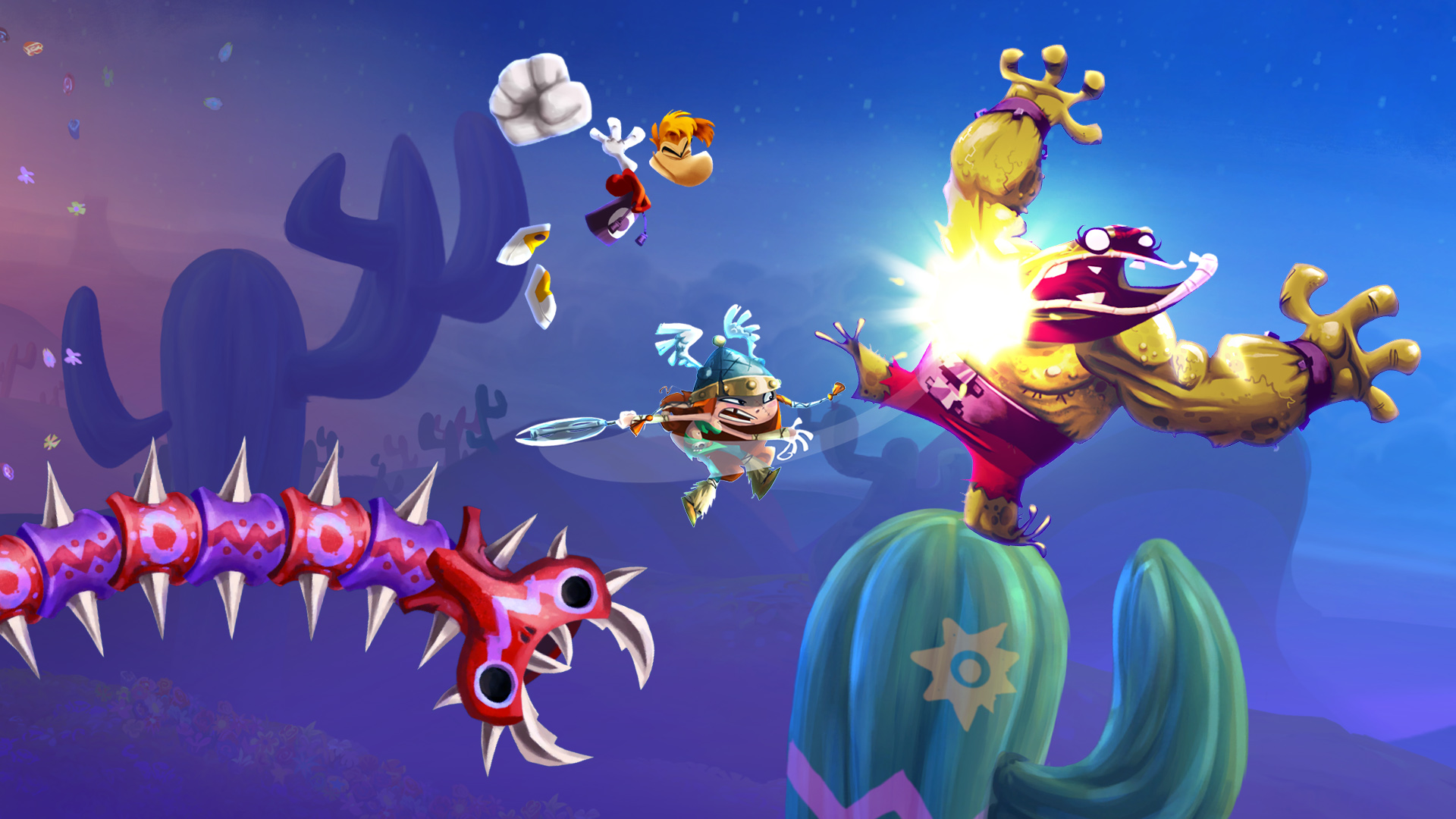 I will find you…and I will bubblise you.

The first thing you’ll notice about Rayman Legends is that it is a visual extravaganza, a real feast for the eyes. In the age of realistic arm hair rendering and a colour palette consisting of only greens, browns and greys, Rayman really stands out with its vibrant colours and unique art style. The world is split up into paintings ala Super Mario 64, with each hub containing about ten mission paintings to jump into. The areas themes range from the usual repertoire of the fiery levels and the depths of the ocean, to some new tricks including an area based upon Greek mythology. Rayman Legends always manages to keep things fresh with its level design, never lingering in one area for long enough for you to tire of its design. The levels also seem to flow a lot better than they did in Origins, keeping the pace relatively constant rather than the start stop affair we had in Origin’s levels.

The soundtrack to Rayman Legends is also very impressive, introducing a host of delightfully chirpy tunes to accompany your manic dashes across the world, but also dropping into something a little more sinister when the big bad guys turn up. Of particular note are the musical levels at the end of each section, where the entire level is built around the tempo of the music. These levels include songs such as Black Betty and a mariachi version of Eye of the Tiger, which you can watch below.

On the gameplay front, Legends follows in the footsteps of Origins, keeping the classic 2D side-scrolling gameplay of the original Rayman rather than attempting another move over to 3D. In its most basic form, the gameplay can be described as simply keep moving right until you hear the victory music but in reality Rayman Legends is so much more than that. Throughout each level you are tasked with rescuing a number of Teensies who are hidden throughout the level. Rescuing Teensies is not mandatory, but you need to unlock a certain number of them to unlock some of the later levels.

In addition to the Teensies, there are the Lums to collect, which are essentially the coins of the Rayman universe and are required to unlock new characters. Again there is no requirement to get these, but you are awarded trophies based on the number of Teensies and Lums you collect in each level. Oh yeah and there are ten princesses to rescue because if Mario has one and Rayman has ten, then Rayman is ten times better right? Once rescued, these princesses become playable characters which is a nice touch, allowing them to function as more than just damsels in distress. It’s a shame they didn’t vary the character design a little though, as they are all essentially the same model with different hair and skin tones.

Bowser might have a little bit more trouble kidnapping this princess, what with the axe and all.

Rayman Legends does push the collectibles a little too far though with the addition of the scratch cards. You unlock scratch cards in levels and they offer prizes ranging from Lums, a Teensie, an Origin painting (more on these later) or a creature. The scratch card mechanic was obviously integrated to give the Wii U tablet a reason to exist and so it feels clunky on a controller, using the analogue sticks to scratch the card. But even if the movement felt right, it’s still such a pointless mechanic. You unlock an unlockable which unlocks more unlockables. Did Xzibit work on this game? The creatures that you unlock are also extremely pointless. They aren’t even creatures from the game, they are just arbitrary things like pigs, robots and pieces of toast, all of which look the same and serve only to spawn a few lums every real-time day.

So we have our stuff to collect and we have our basic premise of run that way, but what else does Rayman Legends bring to the table? How does it keep the gameplay fresh? The answer is in its level design. In addition to the vastly varied aesthetics of the levels in Legends, the layout and structure of the levels in also massively diverse. One mission will have you casually strolling through a forest looking for hidden Teensies to rescue, whilst the next level will have your frantically dashing away from an oncoming wall of lava.

Globox looks really chilled out…maybe he’s had some of whatever the developers have been smoking.

This constant change of pace and setting is nice but it does lead to a rather messed up difficulty curve. As you progress through the missions they do get harder on the whole, but the difficulty tends to spike up in odd places only to calm down again once the offending level has been completed. This could be a deliberate design choice though and it certainly helps to prevent the player from becoming frustrated, taking ages to complete a level only to get stuck for even longer on the next one.

A new addition to the Rayman formula is that of Murphy the flying frog dude. In some missions, usually the aforementioned ‘oh god there is lava chasing me’ ones, Murphy will help out by moving objects out of the way. And by help out I mean you have to press a button to make him move the offending object out of your path before you face plant into it. This adds a new degree of difficulty to these missions simply by giving you an extra button to mess up the timing on. On the Wii U version of the game, Murphy is controlled by swiping the touchpad to move things out of the way and I’ve seen a lot of complaints that this process isn’t as smooth or natural on the other console versions, however I thought the Murphy gameplay sat very comfortably within the gameplay. The only real complaint about Murphy’s mechanic is that in the times where you aren’t being forced to move quickly by an impending fiery death, it seems rather pointless to have Murphy around moving levers as there is no challenge added to the gameplay.

The time trail missions from Origins have gone, replaced by the new Invasion paintings mechanic. Rather than make you complete a whole level against the clock, the invasion paintings require you to rush through a twisted, more evil section of the original level within a time limit. I found these levels challenging, but at the same time more forgiving than the time trails as you don’t have to restart an entire level every time you mess up, which you will if you suck like I do.

One of most memorable features of Rayman Origins was its frankly insane boss fights. Not so much in terms of difficulty but more premise with the fight inside a giant monsters stomach and the fat lady monster enjoying a lava bath as two personal favourites of mine. Legends does not disappoint on this front with some mad new boss fights including a battle royale with a giant luchador wrestler. The boss fights are pretty easy once you figure out their patterns but they still function well enough. So many games mess up the boss fights, making them just a big guy who takes a lot more hits than the standard dudes, so it’s nice to see Ubisoft put some real effort into making interesting and above all else entertaining.

Luchadors don’t get free dental coverage by the looks of things.

Once you’re through with the main game there is still plenty to do in Legends, including, rather oddly, letting you play Rayman Origins again. Ubisoft have taken the bizarre but welcome decision to put almost every level from Origins into Legends. These Origins paintings are unlocked via scratch cards and add a lot of extra gameplay time to Legends, and even if it is cheating to just rehash old levels it’s a nice touch. Plus the mosquito and treasure chest chase missions from Origins are noticeably absent from the Legends line-up, so it was nice to see them back, even if there aren’t any new ones.

Finally we come to the game’s challenge mode. There are two daily challenges and two weekly challenges in which you can compete against other players around the globe. These missions are set within the game’s main levels and usually come in the form of collecting a certain amount of lums as fast as you can or reaching a certain distance into the level. You receive a trophy based on how your performance rates against the rest of the worlds. The challenges are a nice touch but they feel a little tacked on and unless you’re going for a couple of the games irritating achievements which require a frankly stupid amount of challenge playtime, you won’t be frequenting the challenges for very long.

Rayman Legends is without a doubt one of the greatest platformers of this console generation. It’s not without its flaws but they are so few and so minor that you have to forgive it and see Legends for what it is, a true glimpse of greatness. Crash Bandicoot may have died, Spyro has sold out to the Skylanders crew and has anyone even seen Croc lately? Rayman Legends is proof that a franchise doesn’t have to die, it just has to innovate.