Pokémon X and Y isn’t just another Pokémon game. For nearly 17 years now Game Freak have been busting out Pokémon games like nobody’s business which as well as new Pokémon adds new features as well as new areas to explore. And that really was about it, just small improvements every time from generation to generation steadily raising the bar but never trying to do something redefining again. But now we have the sixth generation of Pokémon and Game Freak has proven once again that not only can they can improve the handheld RPG, but improve on in almost every way. Frankly put, this is one of the most enjoyable portable games I have ever had the pleasure of playing.

Starting with the obvious, Pokémon is now in full 3D. All of the 700 plus Pokémon now have 3D models and animations which do an amazing job of not only giving these creatures a sense of being but showing off Ken Sugimori’s art style and design in perhaps the best way seen to date in the Pokémon series. This can be seen the most during the frequent Pokémon battles you will have to take part in. The Pokémon look superb in 3D; combined with the various attacking animations and effects, every battle is sure to not only look good but feel good to take part in. But while the Pokémon themselves have jumped to 3D, so have the environments. The whole of the new Kalos region is also in 3D and because of this it feels much more expansive and grander to travel through with your Pokémon companions, something that the series had lost before now.

These are the Pokémon battles we have dreamed about!

As said before, the Pokémon you meet now have a sense of being. They are no longer just a thing with elemental attacks or a shield to stop damage, they are more real than they have ever been and this new identity is a welcome feeling to the series. This idea of being something more is further reinforced by one of the new features, Pokémon-amie. This mode lets you interact with you Pokémon, letting you pet them, play rather fun mini games with them and feed them to improve their mood and abilities. This gives another side for players to enjoy these beings (even more so for those who enjoyed games such as Nintendogs/cats) and will make the Pokémon feel like pets, rather than just tools.

For the more hardcore fans, Pokémon X and Y also includes a Super Training mode, yet another mode where you can interact with your Pokémon while you raise certain specific stats to create the best possible Pokémon you can. This review will not go into IV and EV training but this way of raising Pokémon will still generate the same mind set as Pokémon-amie does for the hardcore trainers, albeit in a slightly different way, which is amazing. 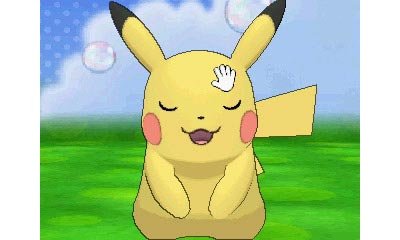 The more you care, the better your Pokémon will perform in battles (as well as loving you a bit more too).

Nintendo have always said that Pokémon has always been about playing with friends suggesting that players should do the multiplayer side of things as well as the main game. In more recent games this has been one of the Pokémon series greatest strengths and it is in full effect in Pokémon X and Y. The multiplayer activates are done via a system called PSS (Player Search System) which will always been on the bottom screen of the 3DS. Here you can find players to interact with from three different circles, your friends from your friends list, passerby (as the name suggests) and acquaintances, players who you have interacted with before.

These interactions are not only simple to use but very beneficial. By selecting any players you can see online in the PSS, you can instantly offer to trade, battle and view their trainer video (which you can set up in game). In these modes you can even talk to these players via the in game chat, so (with a stable internet connection) you can enjoy your battle or trade negotiations with a conversation as well. 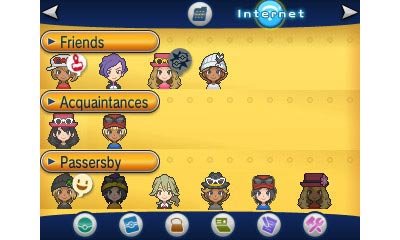 The PSS is a fantastic system on top of being easy to use as well.

You can also use an O-Power on them if you choose. You can use this to buff a player with a special effect for a small amount of time; these include making their Pokémon stronger in battle or even an EXP boost at later levels. The more you use these skills on other players, the more effective they become on them and yourself which is helpful in later stages in the game.

The interconnecting play mixed with the school boy/girl glee as you explore the region of Kalos will make even cynical players smile whilst long-time fans of the series will relish examining the world in detail and will enjoy all the through backs and the additions even more. 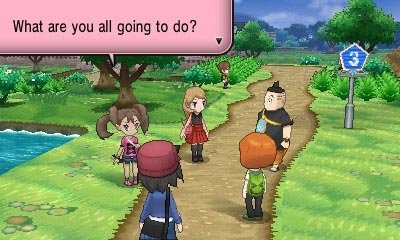 Whatever you want to do in this big colourful and exciting new world!

The Kalos region, based on France and its cities, has a wonderful European charm to it with cafés, salons and clothes shops to browse in almost every town. The whole world actually feels like a real place with a variety of NPC’s to talk to. They offer good advice and can give you useful items for just talking to them. Heck, you can even tip certain NPC’s, such as waiters or cab drivers, just to hear them ecstatically thank you for your generosity. It is a charm that the previous games always seemed to lack and creates a more immersive experience which emboldens players throughout the journey.

But as you would expect while travelling you will meet the rising evil in the region Team Flare. From the outset they just seem to be the set up to yet another standard “boy meets evil team and stops them” Pokémon storyline. While this is true to an extent, the reasoning and personality of the Team really shines through and creates a more winding storyline then you would expect. It doesn’t deviate too far but it is enough to engross the player and guide them along the part to be the hero/heroin and not ruin the overall experience. 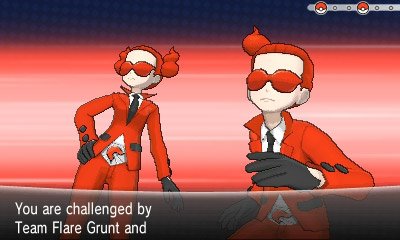 Pokémon X and Y even manages to make you want to “Catch ‘em All”. Training and building a team has become much easier with new features like the EXP Share which give your whole team a slice of the EXP gained from battles and the ability to now receive EXP even after catching Pokémon. The player is handed ways to not only construct there team, but with the ability to rotate Pokémon out and level all Pokémon simultaneously, you can really catch and try everything you want.

Because Pokémon of Kalos are so well designed that you will want to be doing this often. With the inclusion of the new Fairy type and Mega Evolutions on top of over 60 new Pokémon, you will always be curious as to what the next new creature can do. All of the new Pokémon look great and have interesting designs fitting to this new region as well, a rarity considering some of the previous games histories. The Mega Evolutions give the older Pokémon new tricks to use and abuse in battle therefore still making them relevant in this new generation. The new Fairy Pokémon add another layer to the already expansive combat and have allowed for some interesting critters being created that players will be so curious about, they will use them just to see what they can do. 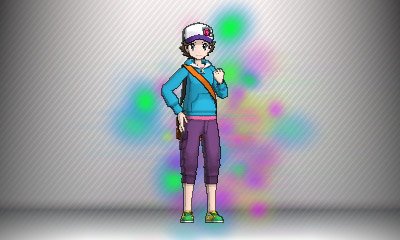 I’m too sexy for my shirt.

This theme of interchanging gameplay also now applies to your player character. No longer are you locked into the generic boy/girl look as you can customise your hair and skin colour and your clothes therefore allowing you to literally put yourself (if you so choose) in your Pokémon world, firmly solidifying your unique place as a trainer in the world of Pokémon X and Y.