Pokémon Sun and Moon are the best Pokémon games to date. A bold claim sure and one I never expected to make, but I cannot deny the truth anymore. It has been three years since we were graced with a new generation of Pokémon with the X and Y series. Those titles re-invented the way we interact with our Pokémon; they gave us updated battling and breeding mechanics, Poké-amie and a full and interactive 3D world filled with new and well-designed critters for us to collect. It was a breath of fresh air that the series needed. However, it had its flaws. Mega Evolution, a pointless story and questionable looking Pokémon had players just as annoyed as they were pleased. Sun and Moon quite literally fixes everything.

Pokémon Sun and Moon made me fall in love with the Pokémon series all over again. Not only is the game a wonderful love letter to 20 years of Pokémon, it manages to appeal to new and old players alike in a way many thought would be impossible; it makes you feel like a child discovering a Pokémon world all over again.

To start, we have a different tale then what we have been subjected to before. You play a young child who has moved to the Alola region from Kanto (the setting of Pokémon Red and Blue) who starts the Island Challenge. This is a set of trials that will take you and your Pokémon across the five islands of Alola to eventually become the Island Champion. No gyms or badges in sight here and it’s a welcome change. These trials are a great way to connect the player to the world and its customs but also being a real challenge when compared to the gym system. The totem Pokémon you end up facing during are not pushovers and use strategies that can trip up unaware trainers. I’ve played every Pokémon title so far and I even found myself blacking out at parts of the game, something that has not happened to me in years. 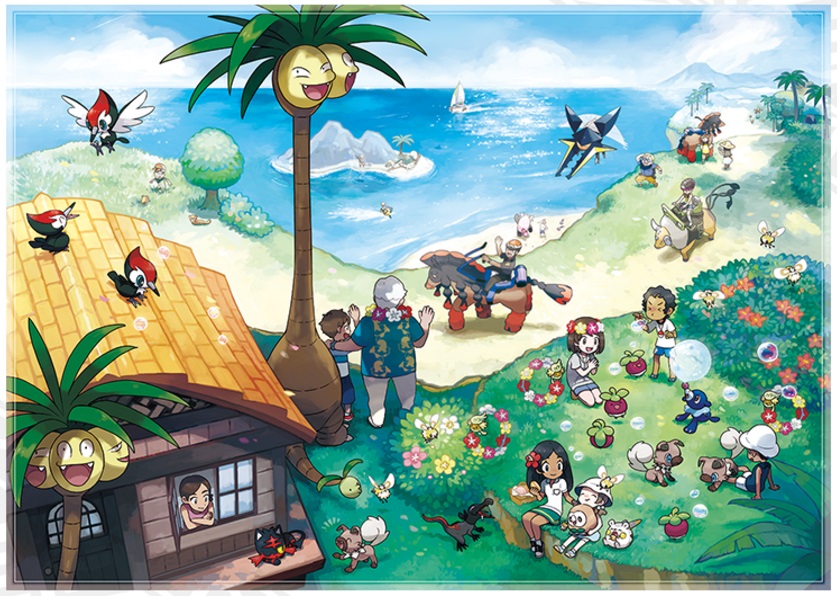 "Every new Pokémon, whether it’s an old favorite with a new twist or a brand new creation, is interesting in some way."

This difficulty increase is noticeable throughout the whole game. Wild Pokémon along with trainers will react and act based on the Pokémon you use and moves you select. This feature really does make it feel like an actual rewarding experience when you defeat a particularly tough opponent or catch a rare Pokémon. Perhaps to counter balance this, Pokémon Sun and Moon makes sure the player is always stocked up with an abundance of free items, Pokéballs and Pokémon Centres, which are now everywhere. This is also evident with the return of the EXP. Share, a feature that in previous games has been accused of making Pokémon ‘easy’. Rest assured however, Pokémon Sun and Moon manages to make using this item feel less like cheating as it has balanced how the experience points are distributed. This makes the whole of the game feel like a cohesive and fair experience rather than making the player feel overpowered throughout.

This, in turn, makes the story that much more interesting. Yes you heard me correctly, there is a story in these games and it’s actually rather good. Characters you meet and engage with go through arcs and evolve, there are a few plot twists that you may not see coming and some genuinely awesome moments that will tickle Pokémon fans nostalgia bones and excite new players. Don’t misunderstand, this isn’t narrative that would make Square Enix jealous, but is a massive improvement from other Pokémon games. We can only hope that future Pokémon titles keep the up the quality of this type of story. Let’s just say, with the ending of this game in mind, I hope there is a sequel.

Tied into the story and the trials is new mechanic for this generation, Z-Moves. These moves are attached to crystals that you are rewarded with throughout the game called Z-Crystals. You give them to your Pokémon to hold so they can unleash visually striking, super powered up moves in battle. While on paper this sounds like a fantastic move, however, in application it’s quite lacking. There may be a variety of moves available and some Pokémon have been able to make a small comeback (looking at you Porygon-Z!) but overall it’s rather underwhelming. It’s forcing a Pokémon to hold an item that can only be used once with rather limited and linear effects. Fun, but it gets old quite fast. 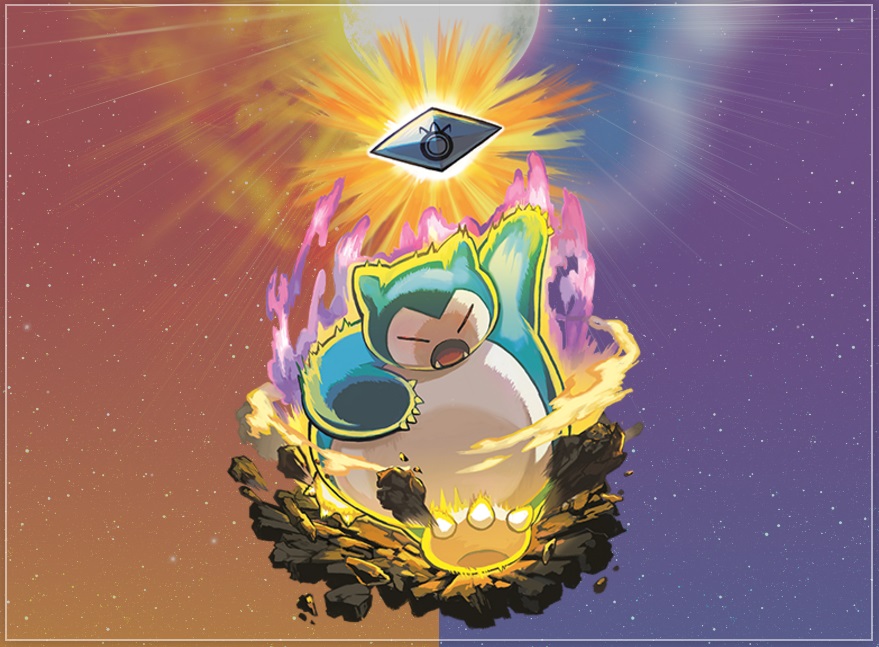 "Tied into the story and the trials is new mechanic for this generation, Z-Moves"

Speaking of visuals, Pokémon Sun and Moon also are the best looking games yet. The larger character models and animation changes really help to draw you into the world. It allows for characters and NPC’s to emote a lot more than ever before. For Pokémon battles, it’s the little things like the models connecting, new particle effects being added and changes in Pokémon expressions make them that much more interesting to behold. This also makes the cut scenes stand out as well. Thankfully, they rarely out stay their welcome and are always a pleasure to watch.

The Pokémon themselves are also visually different from earlier generations. Alola, being based off Hawaii, gives us Pokémon that range from being a Donald Trump lookalike to a possessed child eating sandcastle. But here’s the kicker, they are all fantastic. Every new Pokémon, whether it’s an old favorite with a new twist or a brand new creation, is interesting in some way. It could be its ability, its looks or even its gimmick; every one of them is a fascinating creature to witness. We even have a new bunch of monsters on the block called the ‘Ultra Beasts’. These titans are woven into the story and are perhaps the oddest additions of them all. Not quite being Pokémon, these beasts are strikingly different from anything we have seen before and bring new levels of lore and design to the games. 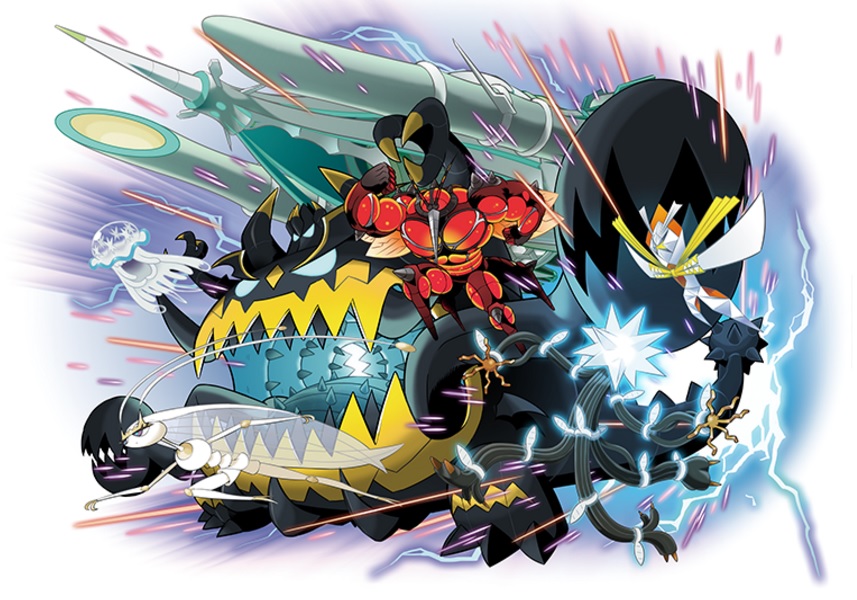 "We even have a new bunch of monsters on the block called the ‘Ultra Beasts’..."

Pokémon-Amie is back from X and Y with a new name and purpose. Pokémon Refresh not only can connect you to your Pokémon by grooming and playing with them, but also can help them after battle. After leaving a battle, you can choose to enter Pokémon Refresh and interact with your Pokémon. If it is suffering from a status condition, like poison or paralysis, you can cure it without having to use an item. This is a small change but it does a surprisingly good job of making you feel closer to your Pokémon, even if the only reason you use the feature for its external benefits.

If that was not enough, Pokémon Sun and Moon offer an extensive amount of online features as well. The Global Trade System and Battle Spot are back with the latter receiving welcomed balances along with the ever popular Wonder Trading, but the new online areas is where the real adventure lies. The Festival Plaza is a new online location that allows you interact with local players and other Pokémon fans online while building up the park. In doing this, you unlock mini games along with various stalls that can be used to get helpful items for boosting and even training your Pokémon. Unlike previous Pokémon titles however, these mini games are not just a throwaway features. They are a lot of fun as well as being mentally stimulating and some can even be played with up to a hundred other trainers in real time! 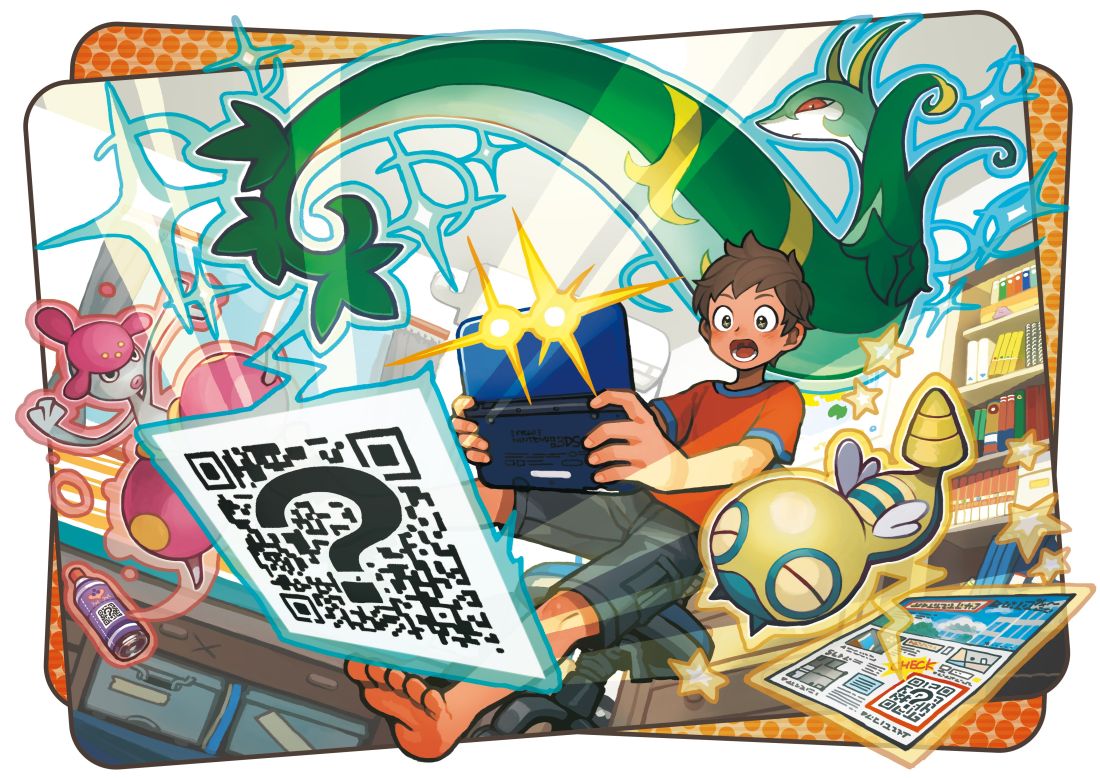 When Pokémon Sun and Moon were originally announced, the Pokémon Company stated that the Alola region would be bursting with life. I couldn’t agree more, Pokémon Sun and Moon have created a world which feels genuinely alive, more so than any Pokémon game before it. It draws you in and keeps you entertained for its entire 30-hour main campaign and keeps you coming back for lots more in the post-game. All the Pokémon Company needed to do was perfect the mechanics and design from their earlier 3D titles and we would have had a great game, but they took it one step further and made a Pokémon experience that returning fans and potential new players will love and enjoy for years to come.