Plants vs. Zombies: Garden Warfare is not your typical shooter, that’s for sure. Reminiscent of the wackiness of yesteryear, when we had games like Timesplitters, Garden Warfare attempts to show us that shooters don’t need to be all doom and gloom World War 3 scenarios. But does PopCap’s first foray into retail games blossom like a beautiful flower, or just stink up the place like a rotting corpse?

Based on PopCap’s hugely successful tower defence game, Plants vs Zombies, Garden Warfare takes the concept and scales it up from simple tower-defence game into a fully-fledged third person shooter. If you’re looking for a story then I advise you look elsewhere, as it pretty much boils down to the zombies are trying to destroy the gardens and replace them with graveyards. But considering this is a multiplayer only title, there really isn’t much need for more justification than that and there are little titbits of lore across the game’s loading screens for those who need to know exactly why a sunflower is fighting a zombie horde.

Plants vs. Zombies has a very charming, cartoonish vibe to it that transfers well to this title. The plants boast vibrant colours whilst the zombies inhabit the duller edge of the spectrum, but they still manage to bring across a lighter tone through some great character design. Garden Warfare is almost certainly the most colourful shooter you’ll find on a console and it makes a nice change from the 50 shades of grey (and brown) that we’re used to.

There are three game modes on offer; Garden Ops, Team Vanquish and Gardens and Graveyards. It doesn’t sound like a lot and it isn’t. There are classic version of these game modes which disable class upgrades, but at their core they are the same gametype. It would have been nice to see some more of the classic gametypes like capture the flag make an appearance as these game modes may not cater to everyone’s tastes. 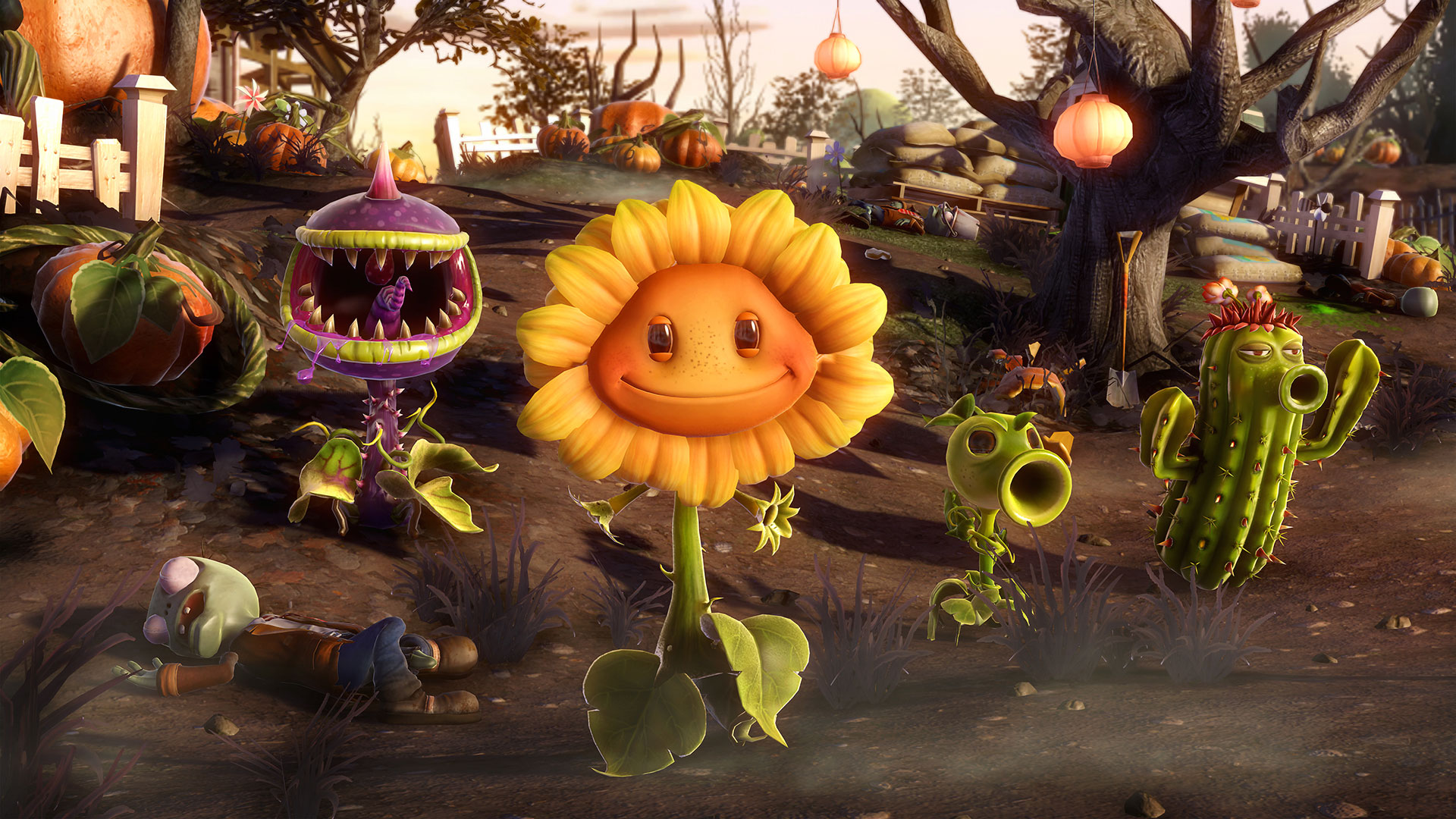 Garden Ops is most reminiscent of Gears of War’s horde mode. It’s a simple and well-trodden formula, but Horde modes are always a ton of fun so why fix what isn’t broken. You and up to three others work together to hold off waves of zombies who are trying to destroy your garden. You can plant potted plants which serve as defensive turrets to help you survive the ten waves of zombie death, before you escape in a flying Winnebago Spaceballs style. Throw in a couple of boss waves into the mix and you have a very solid game type which allows players who prefer to play co-operatively rather than competitively to enjoy the game.

Garden Ops also gives you a place to level up your plant characters and hone your skills with them before taking them into the gruelling world of competitive multiplayer combat. Sadly there is no equivalent mode for the zombies, so you’ll have to jump in at the deep end with the zombie characters. I found this was the start of a somewhat disappointing trend in Garden Warfare; it’s just easier to play as the plants most of the time.

Gardens and Graveyards is the love child of Battlefield’s Rush and Conquest modes. The plants have to defend a garden whilst the zombies have to destroy it. If the zombies succeed then the plants are pushed back to another garden. If the zombies destroy all 7 they win, if the plants hold the line they win. It’s a nice idea in theory, but the execution leaves a little something to be desired. There is no way to avoid the simple fact that the game mode heavily favours the plants over the zombies. Zombies must take and hold an exposed area whilst plants can just sit outside the area and unleash a barrage of area of effect weapons.

Team Vanquish is just an adorable and kid friendly way of saying team ultra-kill murder deathmatch; two teams, first to 50 kills wins. No complaints to be had here, it’s all good fun and any balance issues present in Gardens and Graveyards don’t seem to permeate into the good old deathmatch environment.

Both the plants and the zombies have four classes available for you to play as. The plants have the melee based Chomper, the healing Sunflower, the Agile Peashooter and the sniping Cactus. Meanwhile the zombies have the Scientist, the Engineer, the All Star American Footballer and the Soldier whose roles are a little easier to figure out. All of the classes are well designed and very unique; a fact which can serve as a gift and a curse. You see the plant and zombie classes are not mirrors of each other i.e. no zombie class behaves like the Chomper, whilst no plant class acts like the All Star.

This can lead to a situation where you are much better playing as one team than the other. After all it’s hard not to settle into a favourite class and if the other team doesn’t have that class, you’re always going to feel second best when you play as them. I’m rather partial to the Chomper and his ability to just eat players whole, but I can’t eat anyone (not even their brains) on the zombie side. This wouldn’t be an issue if you could set a preference for which team you played on, but sadly you cannot.

As Garden Warfare’s release came closer and we learned about the sticker pack system, many feared the iron hand of EA would come down and slap its micro-transactions all over the place, however that is not the case. When you finish a match you are awarded coins based on your performance. You use these coins to buy sticker packs which can unlock class upgrades and variants, one-shot cards to help your side during battle and of course, customisation options such as hats, tattoos and plant pots.

The in-game economy is well balanced, requiring some work to gain enough coins for one of the expensive packs, but not so much that it feels like a grind. I’d actually tolerate micro-transactions in this system so long as the in-game economy isn’t messed with to make it harder to get along without shelling out cash. The pack system is loosely based on the one used in Mass Effect 3’s multiplayer and it works well here. The stickers themselves also feed the completions gamer’s needs, as you can look through your sticker book to see what you have and what you still need.

One last thing; EA…just use the Azure servers please. Your servers are bad and you should feel bad. Not a constant complaint but I had one or two connection issues with Plants vs. Zombies.

I find it hard not to complain about everything that annoys me about this game, but only because it’s so much fun that I just wish these issues had been ironed out. Plants vs. Zombies: Garden Warfare is a good sign for the coming generation, and a valiant first effort at a larger scale game from PopCap. There are some balancing issues here and there, but ultimately Garden Warfare is an interesting take on the shooter genre, and most importantly, it’s damn good fun.