Oxenfree is a coming of age story, both for its protagonist Alex and for the adventure game genre’s recent revival movement. Built by Night School Studios, a newly formed studio built by industry veterans from Telltale Games and Disney, Oxenfree offers an intriguing setting and a varied cast of characters. Moreover, Oxenfree’s most impressive feat is its ability to disguise the fact that it is essentially a walking simulator with a few simple puzzles thrown in.

Described by Night School Studios co-founder Sean Krankel as ‘Freaks and Geeks meets Poltergeist, with a little bit of Stand By Me and The Goonies mixed in’, Oxenfree tells the story of Alex, a young girl who brings her newly acquired step-brother Jonas out to an all-night party on Edwards Island. Proceedings start out pretty light-hearted with a little drinking and the mandatory game of Truth or Slap, but events quickly take a turn for the paranormal when Alex tunes into a strange signal in a cave using her radio.

Beyond that I don’t want to spoil Oxenfree’s story too much, as how the adventure unfolds really is the meat of the experience, with very little in the way of gameplay or challenge to occupy you. You control Alex on a seemingly 2D plane, though in reality Oxenfree appears to be rendered in 3D judging by the fluid movement and rotation of the character models. Indeed, Krankel said in an interview about Oxenfree before its launch that “We wanted it to feel 2D and 3D at the same time, with a dark feature animation quality. It was important to us that the world felt analogue, inviting, and nostalgic”. Mission accomplished Sean because figuring it out screwed with my head more than a little. This visual throwback to old school adventure games like Grim Fandango creates a sense of familiarity to Oxenfree’s environments, giving the world an inviting and light-hearted atmosphere, until the shit hits the fan of course. 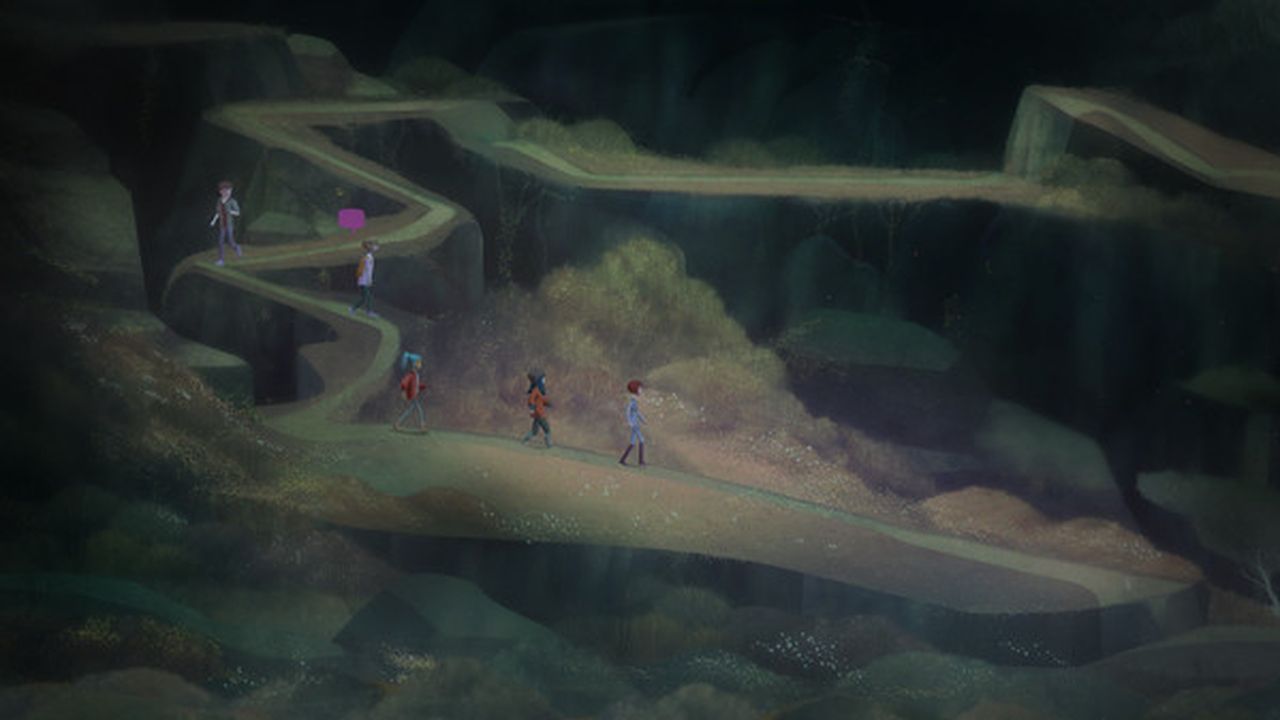 It’s not just the development talent that have wandered in from Telltale Games, as much of the voice acting cast also have significant pedigree in dialogue-driven games like The Wolf Among Us, The Walking Dead and Tales from the Borderlands. Ignoring Alex for a moment, the supporting cast consists of the motor-mouthed pothead Ren, the uptight, bitchy Clarissa and her sweet but almost sycophantic best friend Nona. Rounding out the bunch is Jonas, Alex’s new-in-town stepbrother who comes off as a little rough around the edges and with a possibly sketchy childhood, but overall a good kid just trying to get by. Alex herself is smart and more than a little bit of a nerd, but much of the rest of her personality is determined by your dialogue choices. This isn’t Mass Effect or Infamous, so you’re not deciding if she’s Hitler or Mother Teresa, but your responses will determine her level of self-confidence, argumentativeness and overall demeanour. For example, Ren lets Alex know that he fancies Nona during their walk to the beach. Skip forward to the game of Truth or Slap at the beach and Clarissa tries to bust Ren for wanting to do the horizontal monster mash with Nona. As Alex you have the choice to chastise Clarissa for her mean-spirited question, say nothing or bust Ren and slap him right across the chops.

Credit where it is due, the exchanges between characters are some of the most natural sounding conversations in a video game. Life is Strange recently delved into the world of the dreaded teenagers and whilst it was a fantastic series with some great moments, the dialogue all too often felt stilted and forced as if written by middle-aged men who watched a ton of MTV rather than anyone who’d ever met a teenage girl. Their conversations feel natural, filled with segues, jokes and snarky jabs whenever the opportunity arises instead of just clumsy exposition and attempts at character development via description rather than action. We aren’t told that Ren is a stoner with a tendency to make bad decisions, we’re shown it through his dialogue, behaviour and, more importantly, his actions feel natural because of the way his character has been developed; nobody does anything stupid or out of character just to advance the plot, a crime far too common in gaming narratives.

I said earlier that Oxenfree is a walking simulator in disguise and I stand by it, but I mean it as the highest of compliments. Gameplay consists largely of walking from place to place, with your input focused around the dialogue and interactions between Alex and her friends. Alex also has a portable radio with her, the same one that gets the group into trouble when they tune into the strange signal in the cave. In practice, the radio serves as a way to interact with paranormal phenomenon throughout the game; the player must tune the radio to the correct frequency to progress, with areas where this is possible being highlighted by the radio’s readout glowing red. There are a couple of other mini-games including two out-of-the-blue pop quizzes but that’s pretty much it; you walk, you talk and you tune into a radio from start to end. What’s impressive is that you constantly feel like you’re doing something important to the plot and not just wandering around aimlessly looking for audio logs, a trope that walking simulators stumble into far too often. 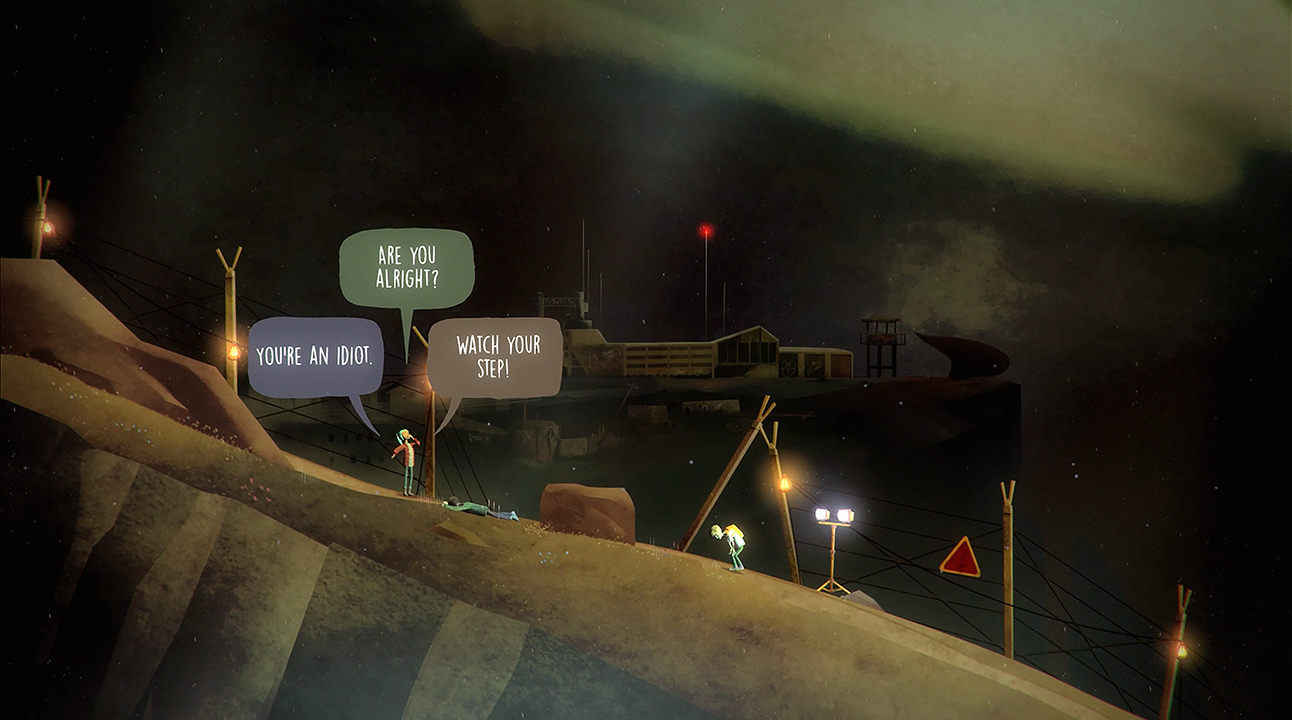 Oxenfree’s environments have a muted, unsaturated colour palette with backgrounds looking like something out of a watercolour painting. The characters themselves have a little more blood in their cheeks, with slightly brighter, fuller colours for their clothing and hair, helping them to pop out against the background whilst still fitting within the world’s colour palette. The most striking visual contrast comes from the paranormal events, such as the ‘tears’ in the world which the radio can tune into. These tears are made up of vivid, red lines and sickly green interiors which juxtapose with the environments perfectly, immediately invoking the supernatural.

Looks aren’t everything though and Night School Studios have paired Oxenfree’s fantastic visual design with exemplary sound, both in the soundtrack itself and the game’s audio design. The soundtrack primarily consists of relatively low-key, unobtrusive background music which acts as a safety blanket of sorts, letting you know that things are fine. The music tone is quickly switched to match the situation though, usually dropping out completely when spooky stuff is going down or jumping up in tempo to give the impression of haste. The audio aspect of the paranormal activities is certainly the most interesting string to the sound design’s bow because of its links to the radio. Other worldly entities communicate much in the same way the ghost does in Poltergeist, mashing together radio broadcasts and various voices to piece together a sentence which gives their messages a particularly disturbing and disjointed style. Likewise, when the radio tunes into a rift, a distinctly electronic distortion noise takes centre stage, increasing with intensity as the player gets closer to the correct frequency. The static crescendo builds tension within the player as they are in direct control of the radio; it’s like forcing the player to open their closet to look for the monster, you have to open the rift but you’re given direct control of the fear-inducing sound effect at the same time making it very counter-intuitive to your perceived safety.

I say perceived because once again, this is a walking simulator and this is sadly the major downside to Oxenfree. I’m going to throw a spoiler warning here, not because of anything plot related but rather because I’m going to give away one of Oxenfree’s biggest game design elements, which will drastically alter how you play the game. If you’ve liked what you’ve read so far, stop reading and go play Oxenfree, then come back and finish up. I’ll wait. 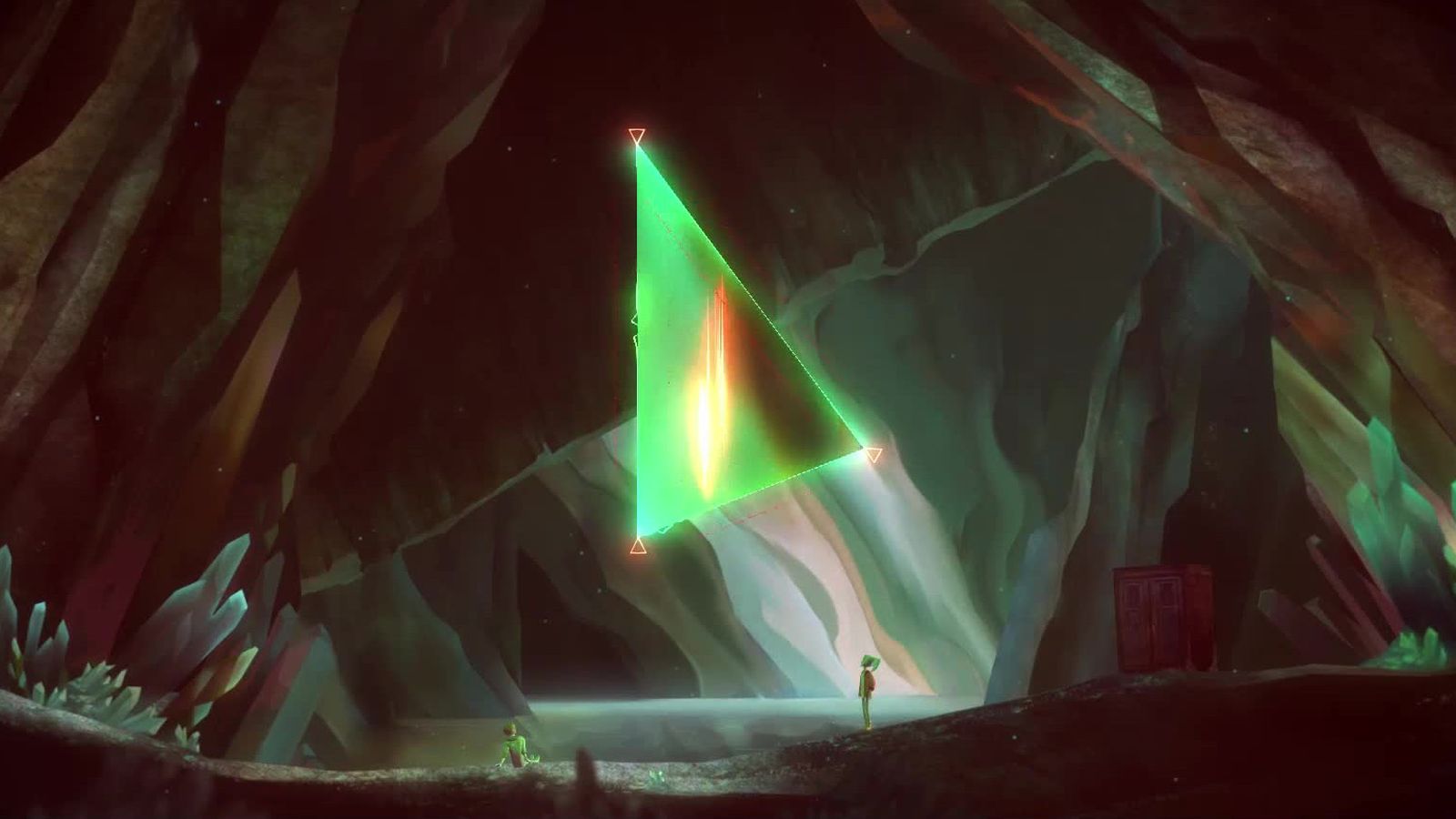 Back? OK good, we can continue. Oxenfree’s biggest weakness is that scary stops being scary when you realise the monster in the dark isn’t going to get you. There are long term consequences to your actions and you can alter how things play out in the end, but there is no immediate consequence to anything you do really. The Xenomorph in Alien Isolation is terrifying because you know it could get you at any moment and whilst Oxenfree is a thriller, not a horror there should still be some idea in the player’s mind that they might be about to meet their untimely demise. To go back to Alien for a minute, the section where Ripley has to don her spacesuit and walk outside into the vacuum of space was masterfully put together: the claustrophobic feeling of the suit, the slow movement speed, the silence of the void played off against an intense soundtrack. It should have been terrifying, but it wasn’t. It wasn’t scary to me because I knew the alien couldn’t come and get me at that point without it being a scripted event. I had no ability to escape or fight back, so I knew I was safe. Once you realise Oxenfree isn’t going to murder you or suck you into the void, a lot of the bluster falls out from under its scare tactics.

Oxenfree’s scare tactics and indeed the plot itself are very much like a magic trick; it’s immensely impressive until you know what’s really going on. On the gameplay front this manifests as a feeling of invincibility, but in the story it just plays out as a bit of an anti-climax. This isn’t Night School’s fault really; any mystery is more interesting before you’ve figured it out, but I couldn’t help feeling that the payoff at Oxenfree’s climax could have been a bit grander. Admittedly, there are multiple endings, but these are only variations on a theme and the consequences that you have on the world all come out at the end when they cease to mean much to you. Some more immediate and dire consequences throughout the game could have added a little gravitas to the story.

The illusion only comes apart when you know how it’s done. Whilst the destination lacks a substantial payoff, the journey is fantastic and Night School Studios can be proud of what they’ve accomplished with Oxenfree. They’ve created a cast of relatable characters, believable dialogue and an intensely spooky world. Oxenfree lacks a real threat to the player, which hampers its ability to scare you once you figure that out, but I can still highly recommend it.

A fantastic debut title from Night School Studios, Oxenfree achieves almost everything it sets out to do. A believable cast with excellent dialogue and an intriguing mystery paired up with a gorgeous visual style and eerie sound design. The only downside to a mystery is that the truth is rarely as satisfying as the journey to finding it. The spooky setting loses some of its fright factor in the later acts but it's still a phenomenal achievement in story telling and characterisation. A must-play for adventure game fans.