It’s rare to have a new IP, even one supported by a big publisher, be such an overwhelming success in a short period of time. Overwatch has conquered the gaming world over the last week or so, with Twitter feeds being full of Play of the Games, stores actually selling out of physical copies of the game while players log hours and hours into Blizzard’s hero shooter. Having played it for about a week, pushing payloads and defending control points, I’m not truly convinced that Overwatch has the staying power to be the juggernaut that it seems on launch. For all of its audio-visual polish and style and its mastery of that ’30 minutes of fun’ that will keep players checking back in for the first month, it may not have sufficient substance or innovation that will have it inspiring a new generation of shooter 10 years down the line.

The look of Overwatch is what captivates more than anything and for good reason. Blizzard has created a fantastic cast of diverse heroes, both in terms of visual and skill design which means there is something for everyone. If hooking unsuspecting supports or low health heroes in a skirmish is your thing, the Mad-Max inspired Roadhog is for you. If zipping round the map and dealing little bits of damage here and there, Tracer’s your girl and if you have no soul, you might as well play Mei. Switching back and forth between heroes mid-game to counter an enemy’s tough defensive line or to build your own is where the main competitive meat of Overwatch is, it’s just a shame that some of the characters seem one note and don’t allow for much counter play besides their single gimmick. Bastion for example, can be devastating when placed in certain chokepoints but outside of those points, the robot’s kit makes it super boring to play. Certain characters like Torbjorn also lose their utility if your team is already falling behind in a mode like Payload, meaning you cannot scramble to mount a defence as by the time you’ve got back to position to set up a turret, the enemy team will be upon you and ready to swarm over the next checkpoint. You really have to play with a pre-built team to get the best experience with Overwatch, as having a team who knows what they are doing and will actively switch to counter enemy threats will make games become properly exciting. Playing with pubs is alright, but it will only be a matter of time before you run into an enemy team all playing turret characters and you can’t co-ordinate your team to smash through the line of robots and slowing beams.

To Overwatch’s credit, its sound design goes a long way into allowing players to co-ordinate and point out key threats. Heroes shout out that there are snipers or teleporters placed around the map, allowing you to take pre-emptive evasive manoeuvres before running into a potential killbox. Each hero has their own unique callout when they fire their ultimate ability, so players are never unaware that a giant set of glowing dragons may erupt through the nearest wall. Every hero has its own set of aural cues that gives away their location, like Roadhog’s heavy breathing or the unique sound of Mercy’s healing beam, so there is always a way to anticipate an attack, as long as you listen closely. In the heat of a firefight, this can go out of the window somewhat as the combination of hero abilities firing off left and right while people scream very forcefully in a variety of languages but Blizzard cannot be faulted for the amount of work that has gone into their audio design. 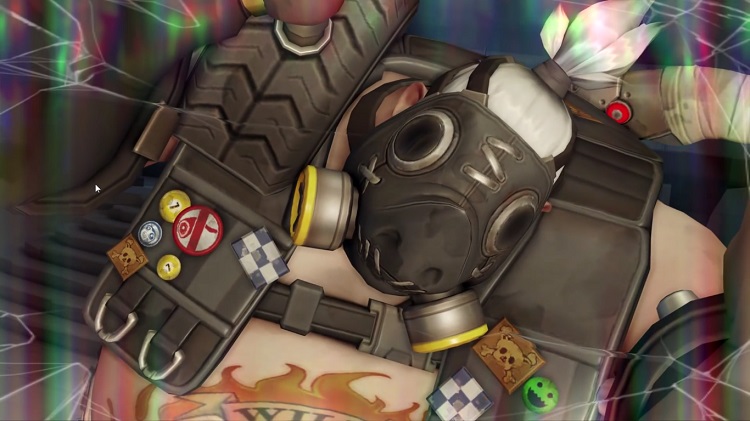 The highlight intros are great bits of characterisation, just a shame that you’ll be seeing Bastion most of the time.

While the audio is top notch and everyone is already captivated by Overwatch’s rogue gallery of colourful heroes, the same cannot be said of the weapon feel. I’m sure Soldier 76’s rifle is firing spitballs at people, rather than high velocity pulse rounds while the beam weapons are loose when firing and have no adequate feedback as to whether I’m doing damage to an enemy. It’s a shame when Junkrat’s grenade launcher and McCree’s revolver feel perfect for the job, while other characters’ weaponry lack the personality that the character has in spades. All of Reinhardt’s abilities have weight and power behind them, but swinging his hammer around is akin to waving a pool noodle at an angry mob and hoping it knocks them all out. This issue of visual design masking actual substantial design unfortunately extends to Overwatch’s maps, with some just blending together after hours of play. While there is a distinct visual difference between the Numbani and Hollywood map for example, playing them feels incredibly similar with players not required to radically change up their strategy to secure a win. It doesn’t help that all of Overwatch’s current objective modes have been done in other shooters before, lacking any of the Blizzard charm which drips over the rest of the game. The Weekly Brawls (similar to the Tavern Brawls in Hearthstone) add a fun mode for players to muck around in when they aren’t teaming up with friends but I would have really preferred an objective mode unique to Overwatch, which breaks up the monotony of continuous Payload games. Without there being a killer map or game mode to push Overwatch into the upper echelon of shooters, it personally lingers just below the threshold of being a proper online shooter gem that I’ll be wanting to come back to after the initial honeymoon period.

It’s not helped by Overwatch’s progression system which is one of the worst I have seen for a long time for rewarding you with utter crap. Half of the unlockables like sprays and voice lines are just pointless collectables, things for people to equip to their character for the sake of customisation. It’s not helped by the lootbox system being the only way to get either new loot or currency, as players aren’t actually rewarded for performing well in a match. Giving money to those who get an epic vote or get on the scorecard at the end of the game would go a long way in cutting down the monotony of trying to unlock more cosmetic items in Overwatch. The actual spread of quality skins is also a problem, with characters like Hanzo getting legendary skins which even change his ultimate animation, while Zarya is stuck with a horrible looking Cybergoth skin which should be a Rare, not a Legendary. Luckily, Blizzard have nailed controller and UI customisation and made it for almost anyone to play Overwatch, with hundreds of ways to tweak colourblind options, aiming reticules and button/key remapping. For a title that is big on inclusivity and getting anyone in to play, Blizzard have certainly made it easy for everyone to get in the fight as comfortably as possible.

As is Blizzard’s pedigree, Overwatch is a game which has spent ages being polished by its team of designers and engineers to make it as smooth a game as possible. The netcode and framerate are as solid as can be, the matchmaking is pretty fast and bar some difficulty keeping parties together on console, playing as a group is no problem at all. Overwatch is the perfect in how far style can get you, as its aesthetic has already placed it higher than many of the shooters released in the past few years. With just a few more individual modes, a really amazing map and just removing Mei from the roster all together, Overwatch could become a classic but at the moment, it’s just a very well made hero shooter. For many, that’s just what you want.

A well made and incredibly stylish hero shooter, Overwatch is definitely one to pick up if you want some shooter action which is a bit more joyful than your standard military fare. Just don't expect it to hold your attention for years to come.