It has been three years since Operation Abyss New Tokyo Legacy, a visual novel RPG hybrid was released in Japan. We gave the game a respectable score of six out of ten when it was released in English back in 2015 for the PlayStation Vita, and a few years later a PC port surfaced through Steam. The long awaited sequel has now arrived, under the name of Operation Babel: New Tokyo Legacy. Several new systems have been introduced to the formula for Operation Babel, which make the game a more enjoyable experience than its predecessor.

The storyline of Operation Babel begins in a similar manner to that of Operation Abyss. You take on the role of an unseen protagonist who attends the local high school. After being attacked by a creature called a Variant, you are inducted into the XSith Squad, a highly secret team of operatives given powerful abilities through a process known as Code Rise. Your mission as a part of this team is to enter a series of labyrinths and defeat the Variants within. Along the way, you will also encounter a rogue group of operatives, who are seeking to use the variants for their own misguided ends, and infiltrate an unknown object known only as the Embryo. The storyline has a more defined structure than Operation Abyss, especially during the late game where betrayals of the main cast spring at you in the worst possible moments.

Direct sequels rarely change the formula that makes the original game a success, and this is certainly the case in Operation Babel. Most of the games exposition takes place within scripted visual novel style cut scenes, which thankfully can be easily skipped if you are looking to head to the next labyrinth without paying heed to the narrative. This is not to say that the game’s plot is bad, as it builds on the enjoyable plot of the original game. Several characters from Operation Abyss make a return appearance, such as the confident leader of the XSith Squad Captain Alice, and the slightly underwhelming extended technical support that comes from Kaito Saeki.

Like in Operation Abyss, Operation Babel allows you to begin the game in one of two ways. You can either start with a balanced set of characters that have been pre-created for you, or you can use the extensive creation system to build your own comrades for the battles ahead. Aside from some new clothing options, the system has been relatively unchanged, although the Code Rise system has been expanded to allow hybrid classes, so you can create more dynamic characters such as an Academic Monk or a Knight Conjurer.

The industry standard first-person battle system returns with very few changes, although there weren’t many to contend with first time around.  One of the best pieces of news is that it is no longer necessary to use the confirm button to skip through text in battle, which was one of the more serious faults that certainly needed to be addressed from Operation Abyss. It is also now possible to speed up your battle turn, meaning that a wild encounter can be completed in seconds rather than minutes for the same monetary and experience related benefits.

Once inside the labyrinths, you can perform various tasks outside of battling rogue Variants. The enjoyable side quest of cracking open Code Chips returns, with a series of older items and weapons to excavate, as well as some new items to dig up once you have a broad range of team members to break through their defences. The visual designs of the locations have definitely improved from Operation Abyss, with one particular location having you wandering inside a winter styled shrine complete with falling snow.

From a graphical standpoint, Operation Babel uses the same cel-shaded anime portraits and pre rendered backgrounds that the original game offered, except they do look slightly sharper and more colourful this time around. The soundtrack offers the same type of anime inspired compositions as Operation Abyss, but unfortunately for fans of English language dubs, this sequel only includes the Japanese voice over track in the PlayStation Vita release.

Overall, Operation Babel New Tokyo Legacy is a sequel that takes what made the original game work, and removes a few of the sharper edges. The new Cross Blood system and enhancements to the Code Chip mechanic keep things fresh, and the enhanced storyline keeps things moving at a definite pace. If you liked Operation Abyss, then this sequel will certainly not disappoint you with the content that it provides.

A competent sequel that fixes many of the original game's issues, Operation Babel: New Tokyo Legacy is a must buy for fans of Operation Abyss. 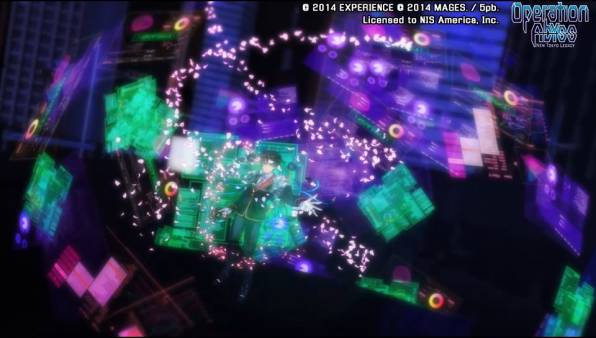