The Ultimate Ninja Storm series has become the equivalent FIFA or COD of the licensed games world, with new releases of the franchise seeing slight changes to the core fighting system, some roster updates and a Story Mode which covers the next little bit of the lumbering Naruto Shippuden series. As Naruto’s tale finally wraps up, it only makes sense to send the ninja off with one last hurrah, in the form of Naruto Shippuden: Ultimate Ninja Storm 4. While this title should be a grand celebration of everything shinobi, this 6th instalment of the Ninja Storm franchise reveals how, just like the manga and anime, the series has become bloated with extra fluff while the core has been left to rot.

Just a warning for anyone who hasn’t seen the end of Naruto, this review will spoil the final chapters of the series so back out now if you don’t want to be spoiled. I don’t know how you could be spoiled, the ending is painfully obvious to anyone who has read a shonen manga before but the warning is still there. Ultimate Ninja Storm 4 picks up at the final part of the 4th Shinobi World War arc, where Madara and his lackey Obito Uchiha have managed to summon the Ten Tails and are just about to activate the Infinite Tsuykomi. For anyone who gave up on Naruto ages ago and is buying this just to see how it all ends, the basic outline is that the bad guys are just about to enact their world domination plan and the good guys are staging their last assault. The story mode goes through the big showstopper fights that fans have been looking forward to, the final nonsensical twist where an evil goddess that had hardly been mentioned in the show turns up as the big bad and the expected final battle between Naruto and Sasuke at the Valley of the End because it’s a tradition at this point. I can’t put the blame on the actual story content on CyberConnect 2 and Bandai Namco, but they do make the best of a bad job with the story mode. You just go from battle to battle, watching short cutscenes to introduce the scenario before you launch into the fight at hand. The path of battle splits occasionally, with you following either Naruto or Sasuke for a little while before the paths meet back up for one of the big set piece moments. It’s a very episodic structure, with each vignette being given an estimate time to complete which is a nice touch if you want to jump in and out of the action.

There is a decent amount of variety, with three main types of scenario which get reworked fairly often during the short 5 hour campaign. You have traditional Ninja Storm fights, Giant battles where you take the form of a Tailed Beast or something equally massive to beat up another titanic foe or Mob battles, where you take on whole hordes of enemies usually on the way to a boss fight. You will sometimes get Giant Mob battles, traditional fights where you are in a super-powered form or even special on rails sections where it becomes a shooter like Star Fox and you have to defeat another large adversary. CyberConnect’s trademark QTEs are peppered into each scenario, making certain fights especially engaging and showing off some stellar animation as you see a fight from the show rendering in engine. The problem is that while CyberConnect is doing its best to make each fight interesting, the actual combatants you face repeat constantly which causes scenarios to become stale very quickly as Madara manages to pull another form out of his arse. Again, this is just the designers doing the best with a dull script which clearly ran out of ideas 2 years ago so you can’t place too much blame on the developers. Nevertheless, you will start to tire of fighting the same 3 enemies in the same progression of normal fight, Giant fight and QTE. 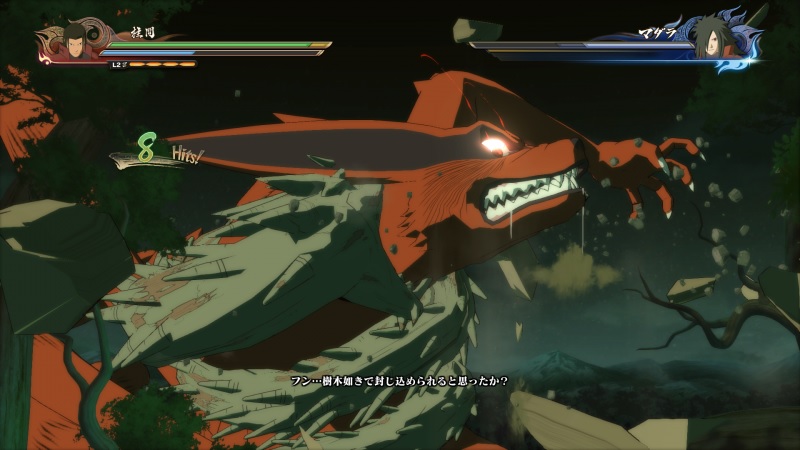 CyberConnect 2 are still the masters of over the top QTEs.

One thing that did really irritate me throughout the Story Mode was the cutscenes which were put in to fill in the gaps between scenarios. Rather than using the actual animation for the cutscenes, CyberConnect have taken screengrabs from the show, partially animated the lip flaps in a sort of slideshow and simply overdubbed them. They are of really poor quality compared to the in-engine cutscenes that are used for the sections that have yet to be animated for the show and when the developers clearly had access to the original animation for the screengrabs, it makes no sense as to why they didn’t just use the original animation. The presentation can become quite sloppy in places, with certain cutscenes having terrible sound mixes and screens lingering for too long after you skip a section. When so much effort has been put into the QTEs and specific battle animations, it just exacerbates the little mistakes even more and makes the whole package look poorly crafted.

After you have completed the Story Mode and unlocked most of the cast on disc (we’ll get to DLC later), the only other single player modes are Free Battle and Adventure. Free Battle is what you’d expect, giving players’ access to training mode, Survival game types as well as local 1v1 battles with custom rule sets. Adventure Mode is an incredibly weird addition, taking the open world from Ninja Storm 2 & 3 and then bolting a really rubbish story onto it where nothing of note really happens but it’s just an excuse to reuse the assets from previous Ninja Storm games. You just go on dull fetch quests through recycled environments, with battles occasionally popping up to break the monotony. Special Memory Fragments do appear around the world map, promising you the ability to play through fights from earlier Naruto sagas but they are just that; battles between old Naruto characters with no extra spin besides maybe a battle condition that ups the power of Justu attacks. I was expecting them to have some of the old cinematic battles from previous Ninja Storm games dispersed through Adventure Mode as an actual reason to play but no, it’s just an excuse to trot out the open world for dedicated Naruto fans.

Outside of the Story Mode, everything else is padding. You can collect special Ninja Items which allow you to unlock stuff for your Online Ninja Card and other customisation options but there is nothing of actual substance to collect. It’s clear that Bandai Namco and CyberConnect want players to play the Online mode as so many collectibles go towards online customisation options but it doesn’t change the creaking combat system which hasn’t honestly changed since Ninja Storm 2 back in 2012. Yes, there have been changes like the Counter in Revolution or the three different character types in Generations but the core combat is the same, which is to say it’s still broken, unfulfilling and built around looking cool but not being satisfying to play. The combos are still centred around you just spamming either Circle or Square depending on if the character is a ranged or melee attacker and fights end up being mainly around who can get the opponent to use up all their Substitution Justus first. The screen becomes so full of projectiles and particle effects that you can hardly tell what is going on the majority of the time. You can still have up to two assists, with the added bonus of Storm 4 being that you can actually switch control to one of your assists by pushing the Right Stick either left or right, which can be used the lengthen combos but you are still just hitting attack over and over with no real finesse needed. Some Awakenings, like Naruto’s Kurama Form or Sasuke’s Susano’o are so much better than others that you’ll never use the older characters. Even then, the only time you’ll use see anyone use a lesser known character is because they have found some cheap strategy which keeps you locked in the air forever. Once people have found this iteration’s broken team composition or tactic, the online mode will die off and none except the 20 or so sadistic Naruto devotees will actually continue playing after a month has passed. 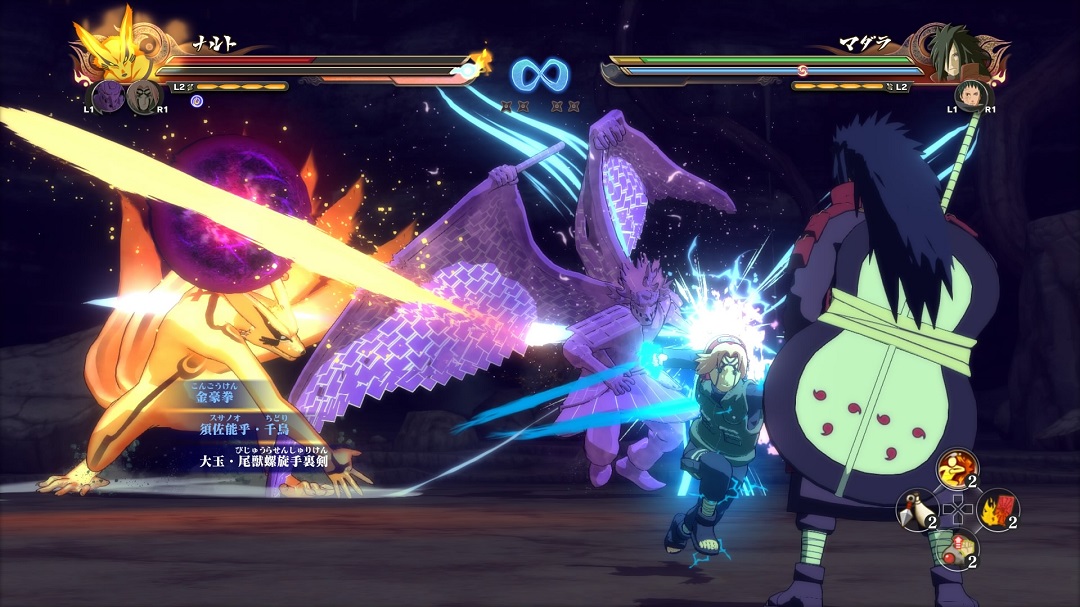 There are so many things on screen at once, it’s hard to keep track of your ninja.

At the end of the day, the Ninja Storm games weren’t built to be well-balanced fighting games, but cool cutscene galleries with some dodgy combat to tie it all together. There is a massive roster for sure, but most of the characters are either cut and pasted from previous games with no change to them or yet another version of one of the main characters whose only real change is a new Ultimate Justu which usually ends in the same mushroom cloud animation but with a different primary colour slapped on the explosion. All the combos do the same amount of damage, so do the Justus with the only difference being the animations and that some have their combos mapped to ranged attack instead of melee. The series is all flash and no substance, with this final instalment revealing the extent to which this is the case.

Seeing as most players are here for the shiny explosions and the cool cutscenes (which are well animated, don’t get me wrong), it’s incredibly shady for Bandai Namco to have locked so many of the Combination Justus behind a Season Pass paywall.  11 of the Combination Justus are only available if you buy the 3 DLC packs for Ninja Storm 4, with 6 additional characters being either DLC or pre-order exclusive. Many of these Combination Justus are for characters that are already in the game, which is not on and there are still about 20 empty character slots which are unaccounted for when factoring in the already known 6 which is even shadier. Bandai Namco have been able to get away with some pretty dodgy practices with their niche titles, as seen through the unlock structure for Tales of Zestiria which was almost identical to how Squeenix’s ‘Augment your Preorder’ system worked yet no-one really questioned it. They seem to be doing the same with Ninja Storm 4 by paywalling quite a large amount of content that should be in the full game behind a Season Pass. On top of the mediocre combat and short Story Mode, this does not equal the dramatic send-off many Naruto fans were hoping for.

CyberConnect 2 still know how to make a killer QTE and while the battle animations and in-engine cutscenes still look amazing, it’s not a drastic step up from what we saw on last gen systems. The Story Mode does do the best out of a pretty terrible script but not enough work has been put into making the combat more worthwhile and the ancillary content nothing more than cheap filler to pad out play time for completionists. While diehard Naruto fans may get limited enjoyment out of it, part-time fans of the series or those who have never been into Naruto will not see the light after playing Ninja Storm 4. Just watch all the QTEs online and you’ll get the same experience to be honest.

What should be a last hurrah for Naruto fans ends up falling flat outside of the brief Story Mode. Even the diehard shinobi will say that enough is enough after playing this.