After the first piece of Borderlands 2 DLC just missed the mark with dulled humour and bland environments, “Mr Torgue’s campaign of carnage” sets all of this right with one of the most memorable Borderlands characters so far and varied areas.

This round of DLC opens with resident mad scientist Professor Tannis discovering a new vault on Pandora, only to be quickly interrupted by Mr Torgue who decides to set up a tournament with the vault as the prize. The player’s job is to rise to the top of the leader board by finding and knocking off the other competitors. The DLC is much longer than the first, coming in at around 6-8 hours with arena challenges for an additional kick of gladiatorial carnage after completion.

The DLC kicks it into high gear almost immediately with Mr Torgue, a mix of Hulk Hogan body, Michael Bay’s love of explosions and enough profanity to make an episode of South Park blush. As your constant companion through your rise to the top he constantly shouts obscenity laden tirades that are consistently entertaining and provide a surprising amount of depth to the character, even though he sounds like the worlds most aggressive dude bro. The other characters show just as much personality, including the mega-macho Piston and the cannabalistic yet polite Motor Mama. A few characters from the main campaign also turn up, so anyone who wanted more Tiny Tina will be pleased to know she is back with more faux-gangsta slang than ever. This injects the DLC with a huge amount of personality that was lacking from the previous pirate-themed outing.

The environments are also a mark up with 7 new areas that are well varied and beautiful. In the beginning you are dropped into “the badass crater of badassitude” which acts as a hub linking to the other areas such as an oddly huge pub and The Forge, a massive junkyard and incinerator coloured with vibrant purples and reds. The areas are large and play host to entertainingly funny side-quests, special mention to the mission where Mr Torgue asks you to murder game critics who disagree with his opinions.

The expansion offers added replayability with the reward of Torgue tokens. These coins, dropped by killing badass or otherwise tougher enemies, are used in new Torgue vending machines spread across the maps. These new diesel powered monstrosities shell out the best the Torgue corporation has to offer for large piles of Torgue tokens, however the weapons are worth the price easily outmatching anything else at that point.

Levelling once again is a bit of an issue. While more difficult than the previous outing, a level of around 30 is the ideal mark between over-powered or stomping material. This is also disappointing in that all of the arena side-quests jump from level 30 to level 50 after just a few matches, suddenly putting the most reliable way of gathering tokens an end game experience. Although a good excuse to revisit with a full party later on, it would have been better if the level curve was a curve, not a cliff.

The 6 or so hours spent within the crater are filled with highly imaginative situations that rival the main story. Fights against the other competitors are a particular highlight, showing Gearbox software’s flair for imaginative fights and locations. The main force of enemies are the classic bandits we have killed numerous times, given a new lick of paint as bikers and Torgue employees, but the locations and bassassery of the bosses more than make up for it. 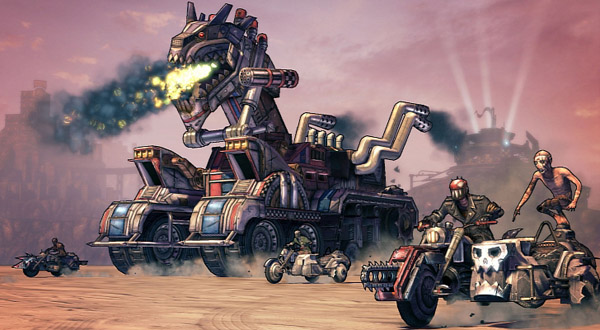 Mr Torgue’s Campaign of Carnage is everything Borderlands 2 is distilled into a smaller package; crazy humour, imaginative and colourful locations, challenging and memorable boss fights and a huge amount of varied guns, grenades and damage dealing paraphernalia. A vast improvement over the last DLC and hopefully a promise of what should come in future trips back to Pandora.