We’ve seen the Fatalities, we know who’s next so now it’s time to see if this instalment of Mortal Kombat is any good. Does the story mode, mechanical changes and online suite guarantee a Flawless Victory, or should it be sent straight to the NetherRealm?

The first thing to note about Mortal Kombat X is the leap in visual quality from Mortal Kombat 9. The previous game was notorious for its pretty hideous character models, gratuitous female character design (I’m looking at you Mileena) and its awkward animation. Fortunately, all these issues have been addressed in MKX, resulting in a fighting game that looks fantastic, animates beautifully whilst also being utterly disgusting at the same time. The lighting effects are great in battle, characters gleam with sweat and blood as the fight goes on and characters flow gracefully mid combo, unlike the janky jerks of MK9. Mortal Kombat X’s female characters now actually look human, rather than if someone stapled some melons onto a Barbie doll and splattered it with ketchup. However, some of the character redesigns have not been for the better, with Reptile’s redesign being especially boring.

The Fatalities are some of the most gory the series have ever seen, with NetherRealm even going so far as to animate brains falling out of skulls that have been sliced in half, or showing steam coming off a body that has been bisected in some horrific way. The sound design is also top notch, with bones snapping with impact and guts wetly slapping on the floor. You can tell the folly artists had fun creating the sound effects for the various beheadings and eviscerations found in Mortal Kombat X. If you can, definitely play with headphones to get the full visceral experience. While there seems to be a great focus on cutting bodies in half and that gets samey after a while, some Fatalities will always make you squirm whenever you see them.

Brutalites however, are very hit and miss. Some characters’ Brutalities, particularly Erron Black’s, are much better than his full Fatalities but require you to fulfil such a laborious set of conditions that you might as well not bother in proper matches. I’ve successfully pulled off one Brutality in an online match and it was by pure dumb luck that it happened. I appreciate the thought of adding them but some are so conditional that you’ll practically throw the match whilst trying to do it.

As for the new kombatants, most of the additions to the roster have been worthwhile, with NetherRealm taking clear experience from Injustice in creating certain fighters. Kung Jin is basically a dressed up version of Green Arrow while Ferra/Tor has one Variation which basically turns him into Bane. However, MKX’s Variation system means that a character will play very differently depending on which mode you pick. You are basically getting three for the price of one with every character pick, making counter picking variations a vital part of the MKX metagame. There is the shady issue of certain fan favourite characters like Rain being in the game just as NPC fighters, which are probably to be later updated to a full fighter. This is especially apparent with Tanya, who is planned to be in the first Kombat Pack, being in game already in this form. Whether this counts as on-disc DLC is murky but what cannot be excused is the decision to lock Goro behind a paywall. He is on-disc DLC, with him being greyed out on the standard character select screen until you pay for him. At least the other fighters are fully created, while Goro simply sits there until you cough up the cash. 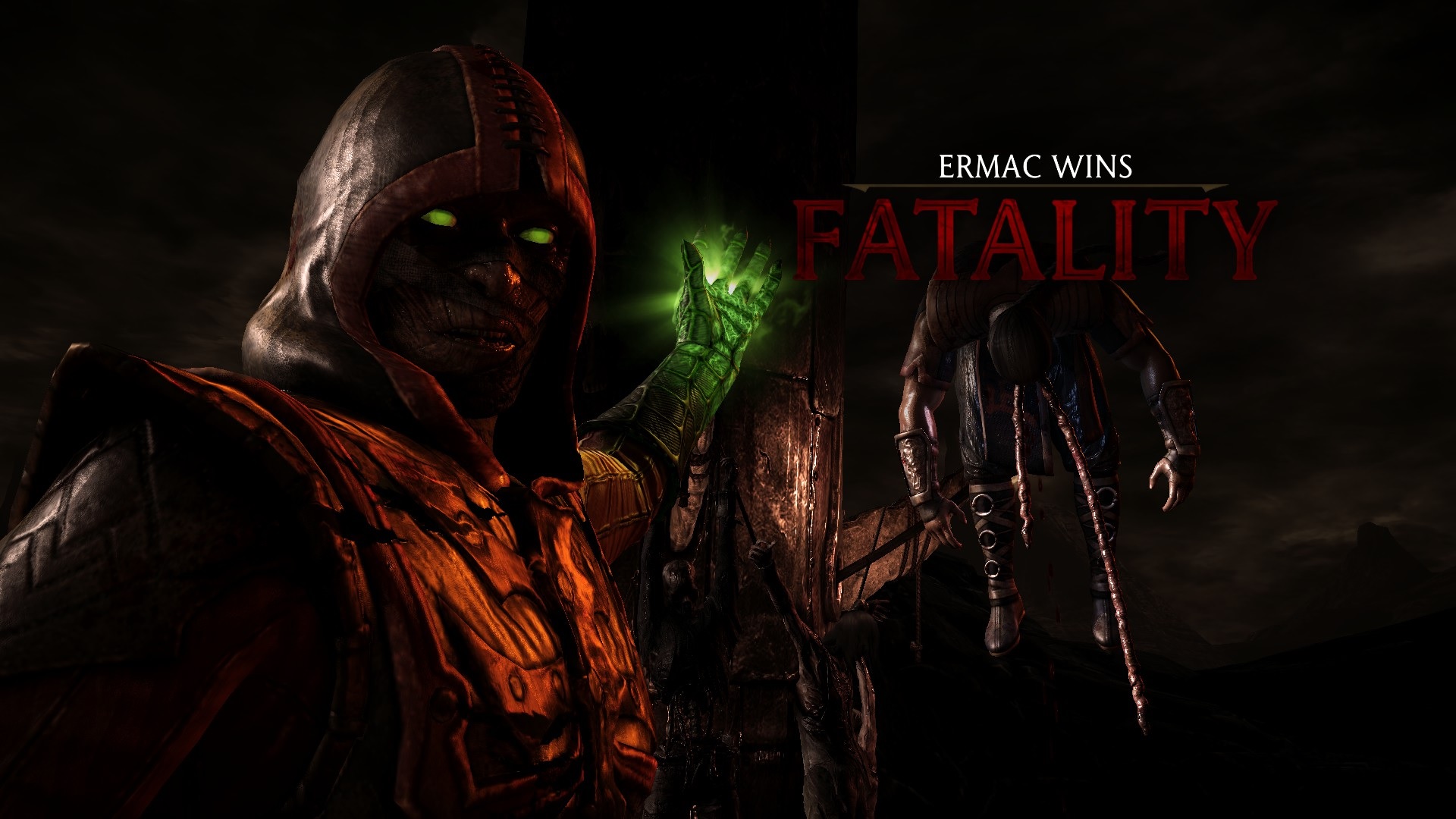 NetherRealm however, have certainly not neglected the single player kombatant, as there is a ton of content for those who don’t wish to dive into the online arena. The story mode is as extensive as in Injustice and MK9, with cutscenes interspersed with short QTEs and fights. The QTEs are that much of a bother, with players being allowed to make 2 or 3 mistakes in a sequence and not fail, while the cinematics themselves are incredibly well voiced and choreographed. I mean, don’t expect Citizen Kane but it is very well written and punchy, featuring many cameos from other Mortal Kombat characters as well as the main cast. I have to give it to NetherRealm on the writing front, with each character having some fantastic dialogue at the start of each battle and in the Story Mode. You will want to hear each character intro as there are some hilarious quips from fighters. As for other single player stuff, there are Towers, which range from Klassic Challenges to Living Towers. The Klassic Challenges are your typical Arcade Tower where you fight a series of enemies until the final boss, Test Your Might is where you have to break a series of increasingly more durable objects and Survivor, where you have to survive as many fights as you can on the same health bar.

The Living Towers change regularly, some which change every hour to others that change every week. These challenge runs are much wackier, with random events trying to make your ascent more difficult. You could have to deal the game flipped upside down, or random portals appearing on the stage or tokens dropping from the sky which gives you instakill properties. These won’t deter you from the online but they are fun little extras to play through if you are low on Koins.

Speaking of Koins, the Krypt is back for players who wish to collect loads of skins, concept art and modifiers for Kustom Kombat. It’s basically a way of forcing you to grind Koins in order to unlock all the bonus stuff in the game but it is completely optional should you not want to waste your time farming through Challenge Towers. Just beware, you may want to turn your sound down whilst exploring the Krypt as you may get some nasty surprises like in MK9. As just mentioned, Kustom Kombat is another mode where you can set specific modifiers for a 1 on 1 fight, like rockets dropping from the sky or players being unable to block. It is basically Test Your Luck without the randomness and it can be fun for a few sessions, should you make a good game type but again, it will not be where you spend the majority of your time.

Now, onto the online suite which is where most players while spend most of their time with MKX. There is nothing drastically different or unique here, with King of the Hill returning from Mortal Kombat 9 as well as your standard player and ranked matches. One welcome change to King of the Hill mode is when you are waiting in the queue to play a match, you can go into training mode and practice that high damage combo until your name is called. This is great for everyone and especially good for a player like me, whose execution goes out the window when I go online. You also have the Faction War, which is the persistent online metagame for Mortal Kombat X, where 5 player factions vie for faction points and to see who is the best.

If you’re not part of the White Lotus, I’m coming for your head.

At the moment, it is all a bit of a mess as players are constantly swapping factions to get trophies and achievements for levelling each one to 50 but this should calm down a few weeks after launch. There is no real incentive for really diving into the Faction component, as the Faction Kills are nothing compared to character Fatalities and you only really get rewarded with new icons and borders for your player card but at least it is there should you wish to get really invested. As part of the whole Faction War, you randomly have events where challenges from other Realms appear, forcing all Factions to drop their current struggles to repel the invasion. Again, nothing too ground breaking here, with the challenges usually ranging from a new Tower to climb or a super tough Invasion boss to beat, which requires your whole Faction to do damage to this enemy in order to defeat it. It reminds me a lot of the Ur-Dragon from Dragon’s Dogma and while it seems a bit of a novelty during launch week, I imagine interest will die down as the hardcore kombatants dedicate themselves to online battling.

I’ve spent enough time dancing around it. You’ll want to know how good the netcode is. Well, it is merely okay. On the PS4 version which I played, the online is region locked so I could only play with European players which I suppose is the best for the connection but even then, I was getting quite noticeable input lag in games on a 3 bar connection. What’s worse is that I have spent up to 10 minutes just trying to get into a match, which seems incredible seeing as it is launch week. If you stick to green connections, you should be fine but go to yellow at a push. You will have to face a ton of zoners and flowchart Scorpions and Erron Blacks but this should die off as people get bored and trade the game in. I hopefully should be able to land a combo consistently by then.

In terms of the actual kombat, it has the potential to be incredibly fast and furious, as you learn how to cancel running into certain moves and get to terms with your character. There seems to be less of a window of error for landing combos than say Injustice, with you having to have very precise timing on even standard combos in order to hit them. Again, I’m no Mortal Kombat pro but this will probably become second nature in a month or so. From the matches I’ve played, you’ll see a lot of people simply spamming teleport and uppercut for the cheesy win but there are players who have already found out some incredibly flashy and high damage combos. Make sure to check out streams and Test Your Might if you really want to get into the competitive side of MKX. I will definitely be there to check out how to play Raiden somewhat competently.

All in all, this is probably the best entry in the Mortal Kombat series. The animation and presentation is leaps and bounds ahead of previous titles, the kombat seems tight and responsive once you get used to the stricter combo window and when the online works, it works a dream. New patches are coming out to fix the connection issues so expect it to be a few weeks until it runs perfectly. A lack of character trials and an extensive tutorial do make getting into Mortal Kombat X a bit difficult but if you soldier on, you’ll be ripping out spines like the best of them.

The best edition of Mortal Kombat to date, with a finely tuned kombat system, disgusting Fatalities and enough for any fan to sink their teeth into. The online is serviceable at present, but NetherRealm will hopefully retune it in the next few weeks to provide the perfect MK experience.