The Monster Hunter series has always been a classic in Japan and while it has sold very well in the West, it was nowhere near as loved as it is in the East. To be honest, who can blame the western fans? For the longest time, players in the US and Europe where stuck with just Monster Hunter Tri (released in 2009) on the Nintendo Wii while Japan since have got Monster Hunter Portable 3rd for PSP and Monster Hunter Frontier Online, a MMORPG.

Monster Hunter has always been a hard game to get into; an action -RPG-which-looks-like-a-hack-and-slash-but-plays-very-differently is a very hard genre to explain and play for the inexperienced! The general gist is that you play a hunter who is asked by a village to drive off the monsters that make the area unsafe to live in, one monster in particular, a Lagiacrus, which is threatening to destroy the whole village. To do this job you must hunt these monsters down and then harvest there remains in order to make better equipment which will allow you to take on more difficult and powerful monsters. This pattern is what most of the game will be and it works quite well.

Think of this game just being constant boss battles over and over, where you get stronger and more adept each time you fight them. This is really great as the monsters are actually a challenge to fight no matter what level you are and the feeling you get when you overcome a difficult challenge is amazing. It is very much like a healthy mix of Dark Souls with Shadow of the Colossus so if that has not convinced you that the gameplay is good then nothing will. 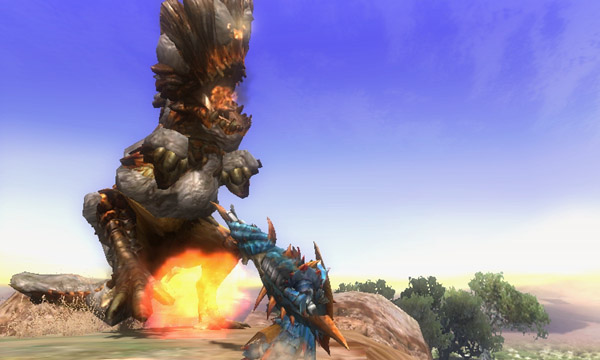 Another credit to this games combat is the great variety, you can use a total of 12 different weapons, including 3 ranged weapons, which all play and work very differently from each other. This allows players to find a style that suits them the best via trial and error by using specific weapons and then develop their skills with those weapons types. Each weapon also has a special feature exclusive to that weapon, for example, the sword comes with a shield which allows you to block attacks, is very fast attacking but is a bit weaker compared to a great sword, which in comparison, is much slower and harder to block with but deals high amounts of damage via its charge attacks.

Another large aspect of the combat is your weapons maintenance, when you use your weapon in combat it will lose its sharpness (if you are using a melee weapon), when this happens your weapon will deal less damage and has a chance to bounce off monsters. This is not a good thing to happen as this can leave you very open to counter attacks and further dulls your weapon. This means that players need to keep a good stock of whetstones to sharpen and repair their weapons while they hunt.

This is just one of the many items you will need to obtain and learn when and how to use. Getting poisoned a lot? Make some antidotes! Need an attack boost? Find and grow some Might seeds! The game is full of areas to gather extra items, such as various ores and foliage, which you can use and combine. Searching for these supplies can be (surprisingly) a nice break from all he hunting and is not that much of a chore unless you want really rare stuff.

Speaking of rare stuff, you will need a lot of it. To get the best weapon upgrades and best armour you will need the top quality resources from specific monsters and the drop rates are VERY low for the good stuff. You may need to grind on some monsters a lot before you get what you need and this can become very annoying after a while and can even cause the most experienced players throw down their consoles in frustration.

Another large feature of Monster Hunter games is the co-op play. You and up to three other hunters can join forces to take on more powerful monsters in guild quests to increase your rank and unlock more things to fight and hunt which is always beneficial to try and do, as it becomes more a more important to get the best weapons and armour to fight better monsters. This cycle is the driving force of the whole Monster Hunter series; despite sounding very monotonous it actually works really well and is very fun if you work with your friends to achieve your goals.
This is where Monster Hunter 3 Ultimate really shines; the drive to best these big monsters and become stronger is very driving, if a monster beats you in combat you WILL want to kill it and the feeling, when you do, is great. This is also why the series hasn’t really taken off in the western markets, this system is very long and drawn out and does not overly fit with some players.

While playing in the multiport as well as hunting with your friends you can receive their guild cards which detail all of their stats and ranks. After doing this, your friends avatars will start appearing in your offline game, when they do you can send them off on hunts to gather resources for you. This is advised as you can get rare items and items that can only be gained via this method and give you a good reason to hunt with as many different people as possible. But don’t worry, you can also collect guild cards by using your 3DS’s street pass if you have no-one to play with!

Something to be mentioned is that the Monster Hunter series was originally on the PlayStation systems (PlayStation 2 and PlayStationPortable) and even though it has now jumped from one handheld system to another the control system is still very tight. As I said before, while the game looks to be like a hack and slash you will need to learn how to fight very precisely and efficiently in order to stay alive and deal the most damage to monsters. This becomes even more important while playing either online or with friends as if you mess up you really get the feeling that you are not letting yourself down but everyone else, this feeling, while also being an acquired taste for various players, will in the long run further drive you to improve. This is a very interesting emotion for a game to inject into a player and is rarely seen in games these days!

Monster Hunter 3 Ultimate, as you may have noticed, puts a very large emphasis on the monsters, there design is interesting and there models are colourful and detailed which is great as your attention will be on them most of the time. However, the rest of the world is not as good to look at as the creatures are. The textures are very low resolution and can even be quite pixelated at times, this is much more noticeable in the Wii U version and can really be somewhat off putting to some player types.

This isn’t to say the environments are not impressive, the large areas filled with gathering points and plenty of memorable set pieces give each location its own special feel, this combined with some great ambient music and wide variety of musical fanfares when you actually engage and fight monsters makes each location quite rewarding to explore and experience over and over again. 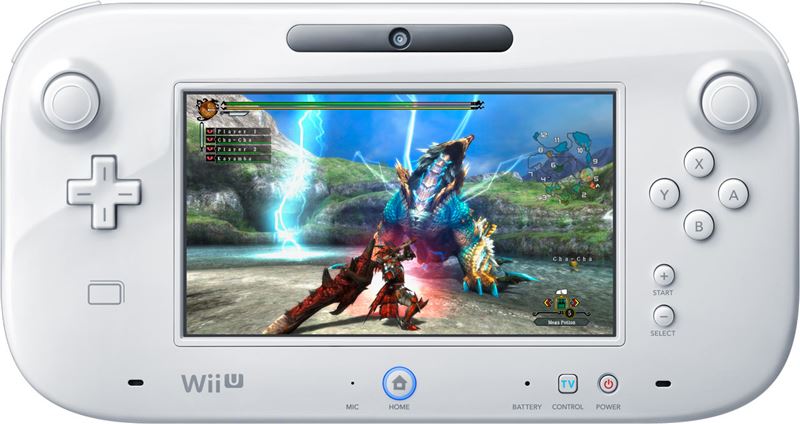 This is one of the main differences between the two versions of Monster Hunter 3 Ultimate, the Wii U version does look better than the 3DS version but the semi low graphics seem to suit the 3DS more. However, the Wii U version has access to online co-op play which is that same as local co-op in every way except you can play with other hunters all over the world! It is a shame that the 3DS doesn’t have this feature as that would have been a big extra for 3DS players to enjoy.