As with many projects funded via Kickstarter, Mage’s Initiation: Reign of the Elements, a spiritual successor to Sierra’s Kings Quest and Quest for Glory franchises, took slightly longer to be released than was initially projected. Although it was initially funded in March 2013, the game has taken ten years to be fully developed. The only question that remains, like many projects which go through prolonged development, have Himalaya Studios have proven that their point and click adventure project was worth waiting for? In this case, the answer is one that is unequivocally positive.

The story of Mage’s Initiation focuses on a young mage in training by the name of D’arq, who is reaching the end of his education in the magical arts. In order to graduate and receive the title of Mage, he must complete three tasks and collect a specific magical item from each of them. This game mechanic is used in practically every adventure game, so it is no surprise to see it reappear in a spiritual successor. Thankfully, Himalaya Studios have learned from the shortcomings of this approach, providing three strong quests with several side objectives, such as brain bending puzzles that have logical answers, rather than the comical absurdity of the custard pie and yeti logic seen in King’s Quest V.

Following in the footsteps of its older brethren, Mage’s Initiation gives you experience points for every task you complete, whether it is defeating a foe with your spells or helping a distressed villager with their problems. These quests differ depending on the elemental affinity you choose at the beginning of the game, as well as the offensive and defensive spells that you are gifted along your journey. One of the best features of these magical abilities is that they can be used to affect the environment outside of battle, such as turning a water wheel using your Air spells, or dousing fires with your Water powers.

The fights that you take part in during Mage’s Initiation are real time magical duels that rely on your physical stamina as well as your supernatural abilities. In a nod to MMORPG’s such as World of Warcraft and Final Fantasy XIV, more powerful spells require time to recharge, so it is definitely worth training against weaker creatures before you try to tackle the stronger enemies. These types of battles are rarely seen in adventure games, so it is nice to see genres being blended together without overtaking its core concepts.

Mage’s Initiation is the latest in a line of high-resolution pixel art styled adventure games, a trend which began with Wadjet Eye Games Unavowed in August 2018. The medieval styled fantasy world is beautifully rendered as a result of this increased pixel count, as well as increasing the visual detail on the character portraits that appear alongside dialogue. As you may expect, Mage’s Initiation is accompanied by a wistful high fantasy soundtrack, with more intense tracks playing during battle or emotional cutscenes. The game’s voice acting is consistently well performed, with the main hero D’arq and his fellow Mage Bort being some of the best examples.

Overall, Mage’s Initiation: Reign of the Elements is exactly what fans of traditional adventure games deserve in a spiritual successor. The immersive graphics, along with the strong voice acting, logical puzzle structure and RPG game mechanics deliver everything that is needed for a medieval masterpiece. If you are a fan of old-style point and clicks or are searching for a trip back to the golden days of gaming, Mage’s Initiation could be just the game shaped time machine that you have been looking for.

A classic styled point and click adventure game that has everything you need for a magical medieval experience.

Filed under: Mage's Initiation: Reign of the Elements 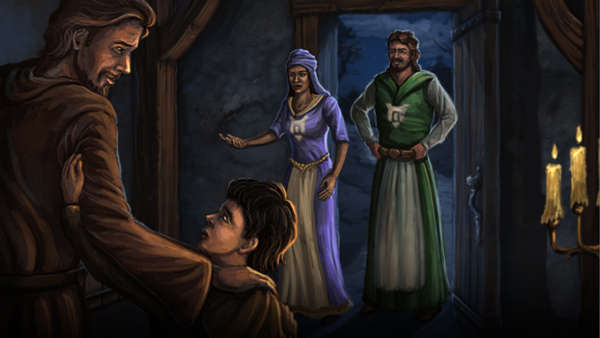 Mage’s Initiation: Reign of the Elements Preview
Powered by Magic