Roleplaying games often visit the theme of post-apocalyptic events, either focusing on the destruction caused by the main antagonists or the characters that are caught in the crossfire. Lost Dimension is a combination of both, and has been developed by Etrian Odyssey co-developers Lancarse. On initial impressions, I was expecting an adventure along the lines of Kingdom Hearts or Tales of Xillia. What I actually played was something entirely different, in the best possible way.

After the world is threatened by a mysterious dictator known as The End, a group of highly trained mercenaries from the global protection team known as S.E.A.L.E.D are transported to his headquarters to defeat him. As they traverse up the mysterious tower that he created in the middle of a bustling city, they learn that a traitor is hiding amongst the group. The End tells the mercenaries that every floor, they must sacrifice a teammate in order to proceed to the next.

Outside of the cut scenes, the main gameplay of Lost Dimension are the missions that you must undertake on each floor. While there are a number of scenarios that are compulsory, a few of them are offered to allow you to increase the experience of your team, or obtain rarer items that you cannot find elsewhere. While each mission presents an enjoyable challenge, the side quests offer nothing except additional experience, which is slightly disappointing, considering that similar RPG’s offer additional exposition to the lore of the world or new abilities that can only be accessing by clearing the extra objectives. 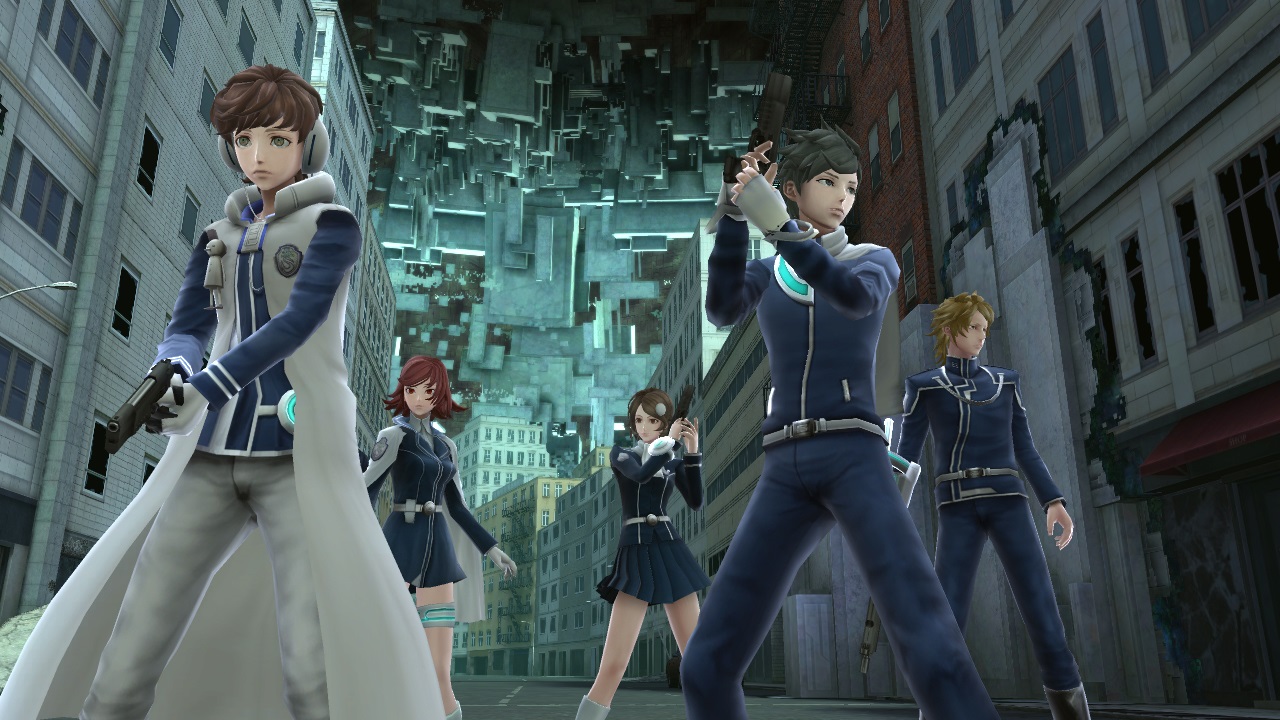 Who you gonna call?

Before you begin each mission, six of the twelve mercenaries must be chosen to fill your party roster. In reality, you only get to select five, as the protagonist Sho Kasugai always takes the first slot. Each character has their own unique abilities known as Gifts, ranging from blasts of psychic energy, to enhancing the stats of your team mates. The goal of each mission is to defeat the enemies that have spawn in the area, and occasionally find the plot related objects or areas relayed in the briefing. If I had to compare the battle system to another game, it would be like an anime version of XCOM Enemy Unknown, rather than a traditional JRPG.

As they level up, each S.E.A.L.E.D member gains Gift EXP, which can be used to unlock additional or enhanced abilities. Sometimes a character will need more than one Gift EXP to proceed through their ability tree, but this a positive decision on the part of the developer, in particular if it substantially increases the abilities of said character. When a team mate is eliminated, their abilities are channeled into an item, which can be equipped by any member of the party to continue to use your unlocked abilities. This is a welcome choice in terms of gameplay, even if the real life implications are slightly less than politically correct.

The Deep Vision system is introduced when you reach the second floor, and allows you to question the loyalty of your new allies. You can only probe a certain number of them per floor, so you will need to listen carefully to the echoes and visions that appear after every mission is completed. When you have selected a team mate, you will need to run after them through a white space with only their words to guide your way. While it is an interesting way to ensure that you have an entirely loyal party, the mini game that ensures during the sequence is slightly frustrating. While it leaves you in no doubt of the intentions of your chosen character, it carries on for longer than necessary, and needs almost pin perfect precision to find the possible traitor in question. 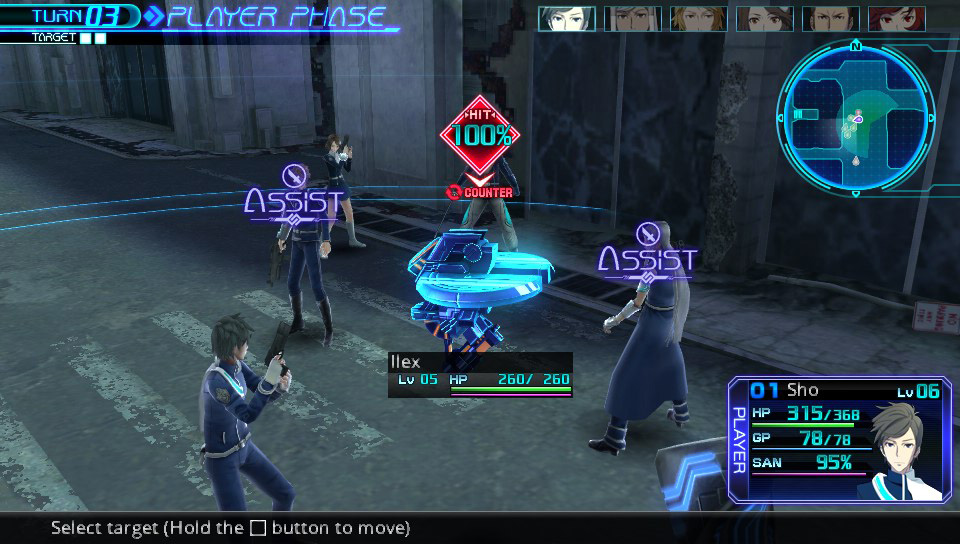 Ever had one of those days when you wish you hadn’t switched on your hard drive?

Like many games of its genre, a mixture of 3D graphics and anime portraits are used for the graphics of Lost Dimension. The character models and user interface are well designed, but there are occasions where the aesthetics in the mission areas seem a little bland. While they are perfectly functional for the gameplay, it would have been nice to see a little variety in between each mission, instead of waiting for the next floor to have a complete overhaul.

One of Lost Dimension’s larger issues is centered around it’s frame rate. When I watched footage from the PlayStation 3 version of the game, I found there to be very little slowdown or loading times. While it is near impossible to expect the Vita to match a home console in terms of relative performance, the visible slowdown that was present in nearly every area of the game is certainly a detriment. Although a few short loading screens to break up the action after a player attacks can sometimes be expected, there are several extra screens that take place before a player attack in the Vita version, with each one lasting at least two seconds. While the PlayStation 3 version was not perfect, the negative differences in the Vita release are enough to disengage the player from the game. 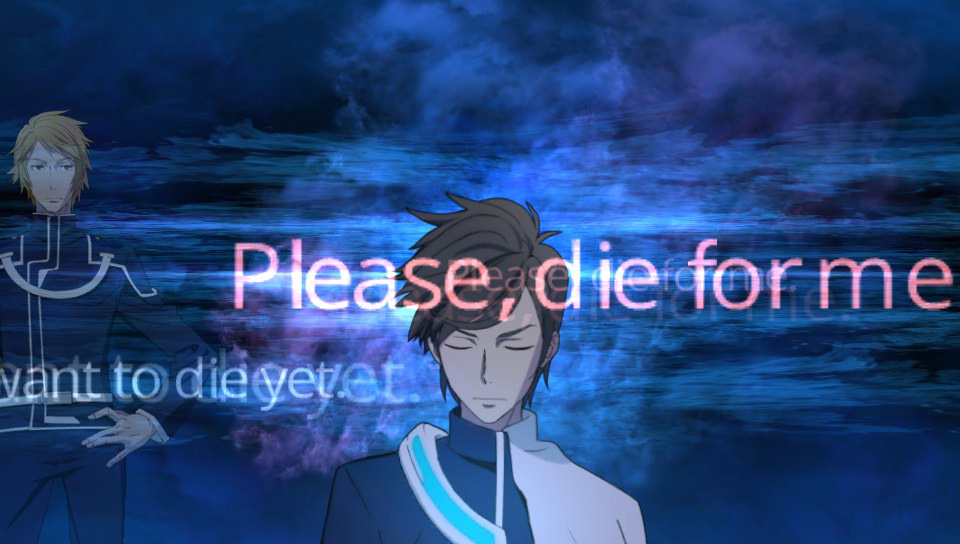 Even with hearing everyone’s thoughts, no one reminded him to get some milk.

Although some of the dialogue is voiced, the majority of it is relayed through visual novel style interaction. These work well, and an occasional anime cutscene provides a break whenever the text becomes long winded. The voice actors pull off their roles well, with The End’s tone being exceptionally cold and calculating. Most of the background music is well composed, in particular the opening movie, which is a fast paced anime introduction that sets the pace for the dramatic adventure to come.

Overall, Lost Dimension is a well-crafted RPG with a few minor issues hampering the portable release, such as a slightly juddering frame rate. While flawed, The Deep Vision and traitor mechanics offer a unique perspective on the process of working as a team. The tactical battle systems and gift upgrades are well implemented, and both of them offer a layer of depth that will ensure you continue to proceed.

A strong RPG let down only by a few issues in relation to optimisation. If you are a fan of tactical games instead of action based titles, you can't go wrong with Lost Dimension.