With the holiday period coming up, and consumers being washed away in a sea of Pokémon titles and Final Fantasy sequels, it is very easy for us to forget about the large selection of innovative indie titles that come out all year round. Which is why it is important that we stop our festivities for a second to appreciate this charming indie title that has recently appeared on the Steam store.

Little Briar Rose is a title by Mangatar. It’s a little point and click adventure that retells the classic fairy tale from the Brothers Grimm; Sleeping Beauty. This title takes the story of Sleeping Beauty and puts it in the perspective of the heroic prince who swoops in to save Aurora from an eternal sleep, but this prince didn’t magically arrive, he had to fight. This is the tale of his fight.

You play as the Prince who arrives at the entrance of the forest, he is greeted by a fairy who reminds that his quest to save Princess Aurora is a perilous as he will have to travel through the dangerous, thorny forest. The fairy helps set the scene of the game, as well as helping out with some of the tutorials of the game, including how some of the perplexing puzzles may work.

You play as the Prince who arrives at the entrance of the forest, he is greeted by a fairy who reminds that his quest to save Princess Aurora is a perilous as he will have to travel through the dangerous, thorny forest. The fairy helps set the scene of the game, as well as helping out with some of the tutorials of the game, including how some of the perplexing puzzles may work.

We need to speak about the presentation of the title, because this is what made Little Briar Rose so interesting to start with. The visual style is meant to mimic the visual look of a stained-glass window, the screen is filled with bright colours and simple shapes, it looks very unique and manages to blend in with the idea of magic and fairy tales very well.

Like many point-and-click titles before, Little Briar Rose shows its depth through simple exploration and interaction with the world and characters. Each creature and character you stumble across in the forest is unique, charming and a delight to talk to, the dialogue in this game may make some gamers think back to times in titles such as Fable or the Kings Quest series. It’s light-hearted as well as having moments of humour.

Even failing quests has an element of humour to it. If you were to fail something for the gnome people, your prince turns into a gnome, if you fail the mermen then you become a fish. It never feels like you have truly failed but would rather be the video game equivalent of accidentally tripping on a pavement slab, you look a bit silly to others around you but no real damage has been done. 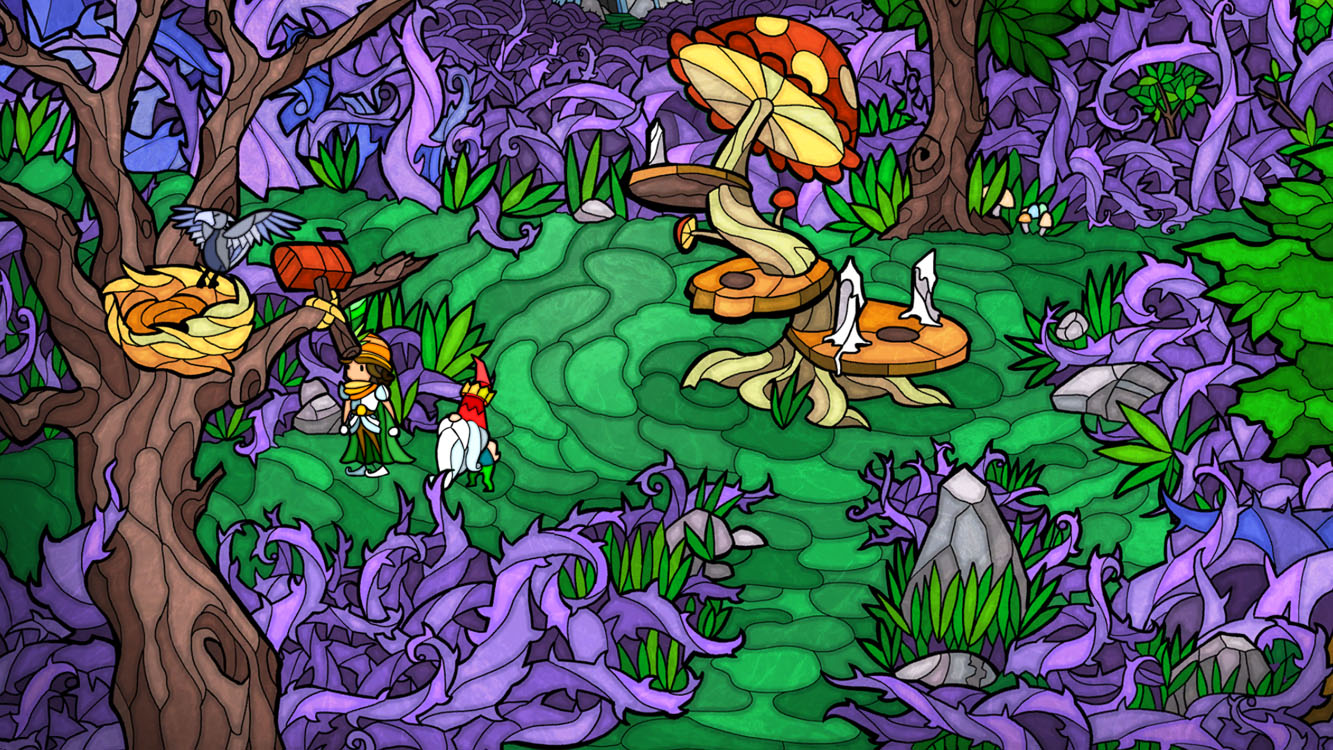 The gameplay also lends qualities from the popular Rogue-like genre, every time a Prince fails the mission, he is replaced by a completely different prince, who wears completely different clothing and will possibly don a rather bouffant hair style. Other than that, these princes are entirely replaceable and don’t offer any unique stats or any difference towards the gameplay of Little Briar Rose.

Veterans to the point and click genre may not take to Little Briar Rose as kindly, despite its amazing visual appeal, and fun storytelling. Under the surface Little Briar Rose is a title that is not planning to make any leaps and bounds for the genre, in fact it sits quite happily as a basic title made for those who have possibly never played anything of the genre. The puzzles are rather easy, and the punishment for failing a puzzle is softened by your fairy companion starting you off just before your quest fell south, with all your belongings in hand.

Other than that Little Briar Rose is a rather enjoyable cheap purchase for the Steam Store, and I would recommend it to players new to the point-and-click genre for its accessibility as well as its stunning yet charming presentation.

Though Little Briar Rose excels in presentation, its simplicity can put off adventure veterans.