Note: I played this game solo, not local co-op as is usually recommended with Lego games.

Back in 2005, Lego Star Wars: The Video Game set the precedent for all future brick based video games. With a low skill ceiling but huge amounts of replayability to unlock all the characters and collect all the minikits, it was suitable for kids and adults alike. A perfect introduction to Star Wars for the younger generation and then its successor, Lego Star Wars II: The Original Trilogy, was a great return to the originals for the parents. TT Games just manage to keep the formula fresh by introducing new mechanics but to get down to brass tacks, if you haven’t liked previous Lego games, you won’t find anything here to suddenly change your mind.

Cover shooting is one addition this time around, but with the reputation of Stormtroopers being so inaccurate, you’ll be surprised to hear utilising cover is actually required to avoid being hit. Lego Stormtroopers have clearly had extra aim training, though luckily you don’t need much practice to hit them; it’s simply a case of tapping the left trigger and letting it autolock onto the nearest enemy. Perfect for anyone inexperienced with shooting mechanics, though depressingly easy for those who are.

While physical Lego is all about building and creating things, there’s a strong focus on destroying the environment in the LEGO games, as every broken object rewards you with the classic Lego studs, each game’s currency. In The Force Awakens, destroying objects often gives you the parts to build different components to solve the various puzzles and obstacles that are often strewn across your path. This time though, if the pieces on the floor have an orange glow to them, it means they can be used to create more than one build; you’ll need to create one option to assist a character, destroy the object you just built, and then turn it into something else to achieve your goal. 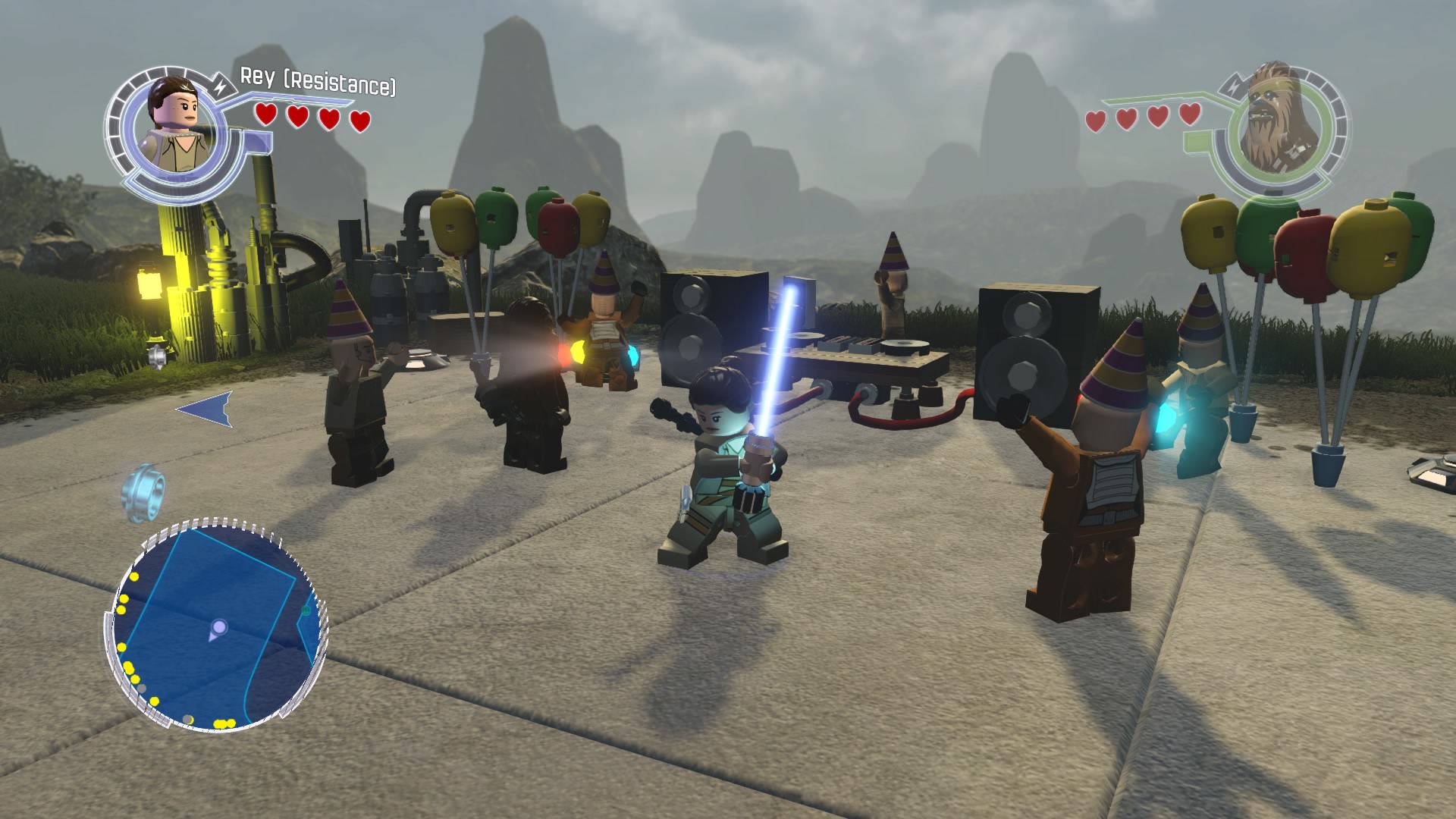 Interestingly, the story kicks off thirty years prior to the events of The Force Awakens, with the Battle of Endor. It serves as a nice introduction for classic characters and is an action packed sequence that very clearly lays out what the rest of the game will be; a light hearted take on the seventh film with gags and skits galore that isn’t too worried about sticking to the script. Additional missions are unlocked by collecting gold bricks throughout the main story, such as hunting Rathtars with Han and learning how C-3PO got his not-so-subtle red arm which are fantastic bits of fan service.

Atypical to most video games, Lego Star Wars: The Force Awakens has most of its content unlocked after completing the main story. Replaying the missions in free play, collecting enough studs and using all available characters to find all minikits, along with achieving enough gold bricks to unlock the aforementioned additional missions is where the meat of the game kicks in. And it’s a good thing too, as after completing the story you’ll likely be left longing for more. 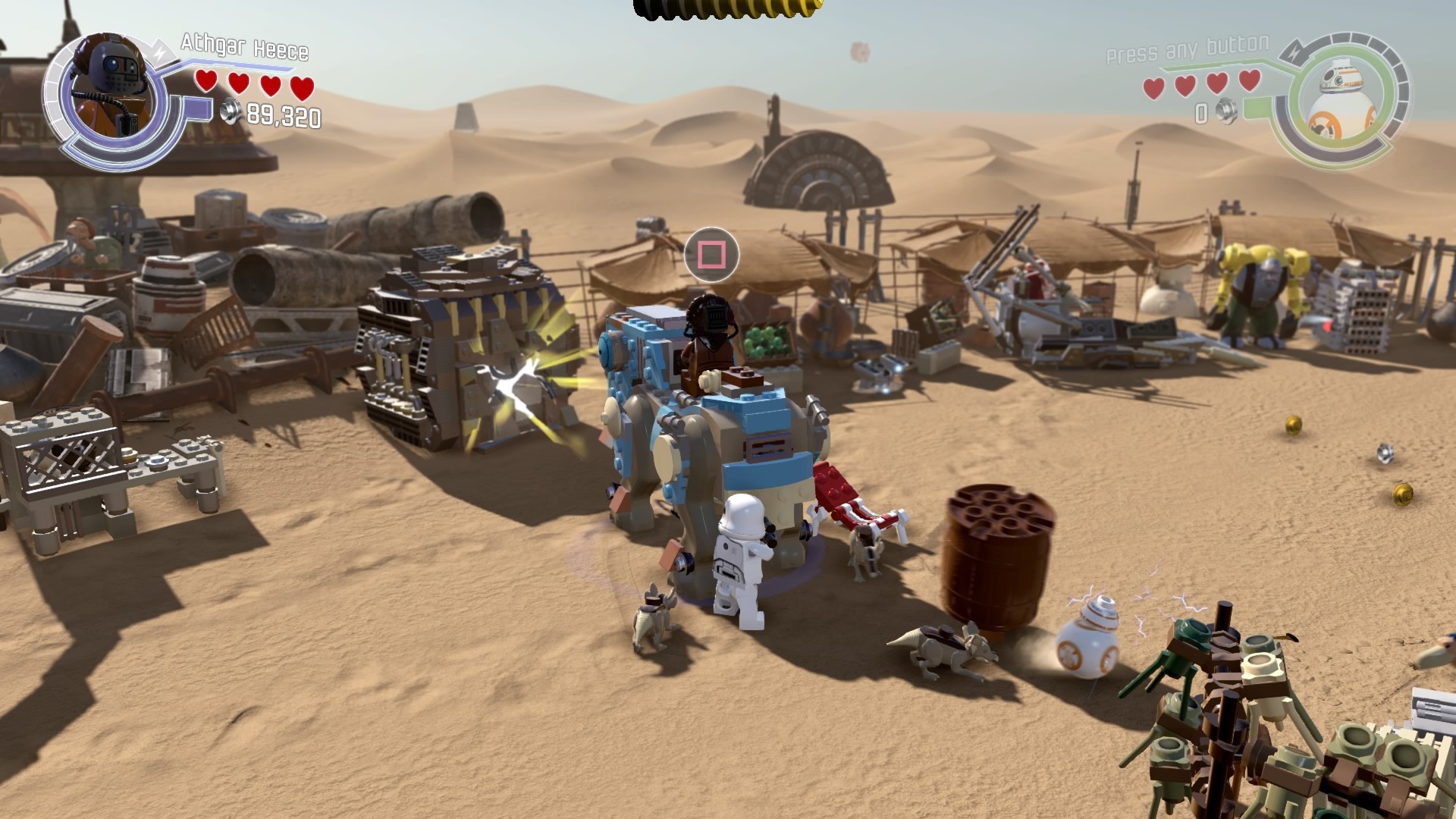 Even though it’s targeted at children and families, the lack of any sort of challenge means parts of the game can become quite monotonous. All that needs to be included is a difficulty system, so kids can enjoy it how it currently plays, while gamers looking for something more stimulating can increase the difficulty. As of right now, fights consist of just spamming square, vehicle sections are easy due to vaguely aiming near your target and never needing to release the trigger thanks to the generous autolock, and the various minigame puzzles required to unlock doors and progress are all literally impossible to fail. Ratchet & Clank did these types of puzzles effectively; there wasn’t a failure state per se, but the later ones required some thought and technique to progress; a design choice TT Games decided to not follow.

Despite Lego characters having very basic and unrealistic designs, the game looks fantastic. The realistic lighting and shadows look great in the forests of Endor while the way the sand on Jakku kicks up as you zoom along in a Speeder is something you wouldn’t expect from a game based around bricks and blocks. It gives the feel of an environment you’ve constructed on a huge table, then placed the physical characters in, like a detailed, crafted Warhammer battleground. 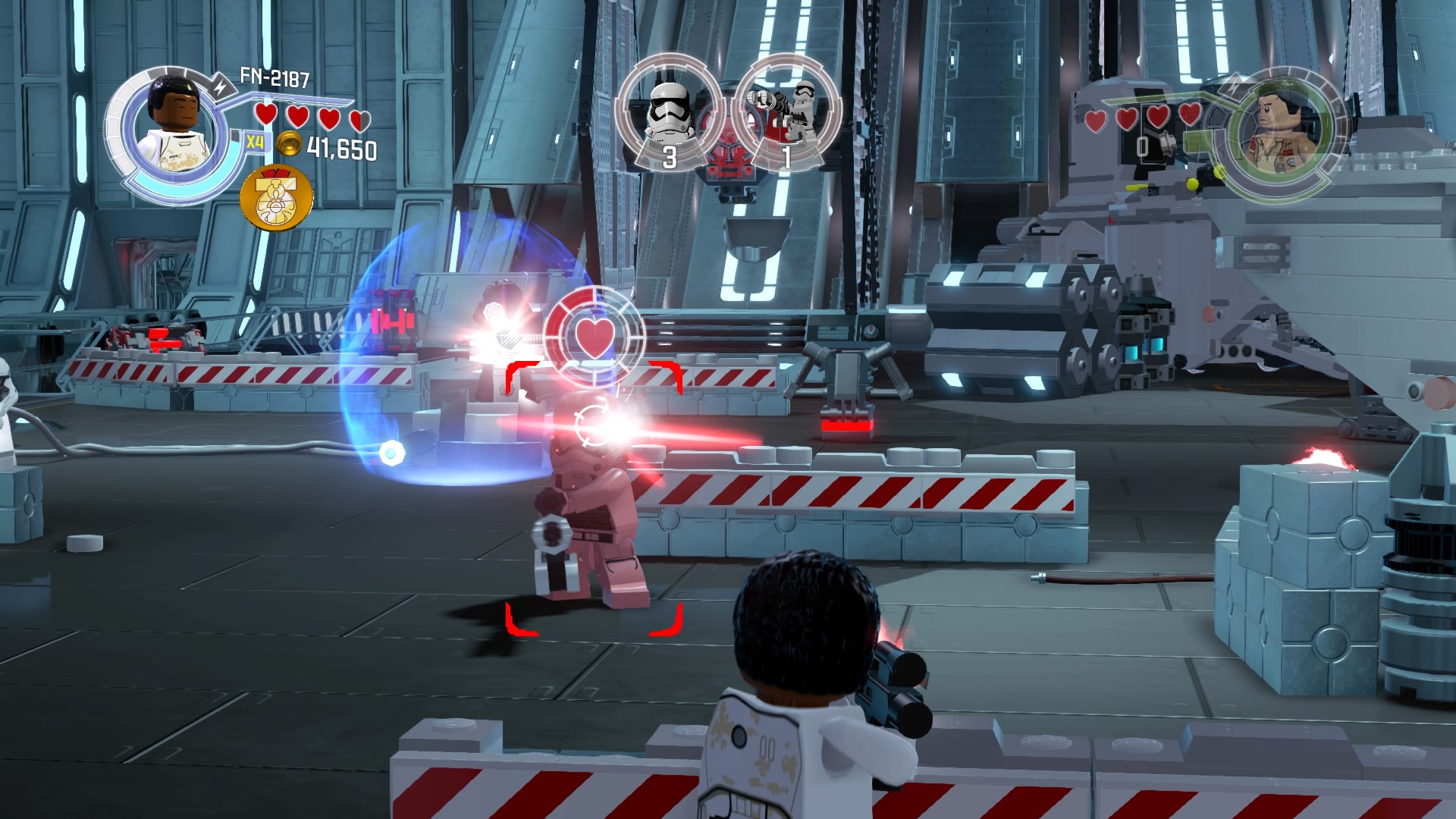 Impressively, many of the stars of the film have reprised their roles to record new lines for the game, including John Boyega as Finn, Daisy Ridley as Rey and even Harrison Ford as Han Solo. The downside to this is where they’ve used soundbites from the film directly alongside newly recorded lines. The cast sound somewhat unimpressed and effortless as their Lego alter egos, like they’re uncomfortable and would rather be somewhere else. Don’t get me wrong, having the proper cast is definitely a bonus, but it gives the impression they just weren’t paid enough to give a crap about the game.

Inexplicable character design is prominent too, with various characters being assigned certain abilities for no reason whatsoever. Finn is able to use a gas mask to traverse toxic clouds while Rey is able to slide under barriers if there’s enough room, but why not the other way round? Is Rey allergic to the rubber on a gas mask while Finn has arthritis? It’s a minor annoyance in terms of gameplay, but it just doesn’t make sense. Any explanation, canonical or not, would be helpful.

Lego Star Wars: The Force Awakens is an enjoyable experience but only if you’re a big Star Wars fan in the first place. If you’re not, the gags will go over your head, the story won’t make a ton of sense due to the amount of missed scenes from the film, and the replayability aspect will serve no interest. It’s an easy game but for the most part it’s fun. What more can you ask for from a Lego game?

TT Games have stuck to what works with LEGO Star Wars: The Force Awakens, and despite being too easy it's an enjoyable experience for all the family. If you're a huge LEGO or Star Wars fan then pick it up, if not then it's worth waiting for a sale.