I’ve not played the original Knights of Pen and Paper, so I was unaware of what awaited me as I made my journey into this pixel-art oddity. Knights 2 is a traditional turn-based RPG game that lampoons the even more traditional Dungeons and Dragons. You control a party of high-school kids playing a somewhat unconventional table-top game. Your resident Dungeon Master guides you through the world from the comfort of your table, the landscape ever changing around you as you explore new regions and traverse danger-filled dungeons.

Thankfully for the uninitiated like myself, there doesn’t appear to be any narrative connections between this and the first entry. In this adventure you are battling against the Paper Knight, a fellow table-top player who’s become evil pretty much for the sake of it and decided to change-up the edition of the table-top game you’re playing. He truly is an evil man. From there you assemble your party and sit around a table for the entire length of the game as your friendly Dungeon Master takes you on a quest across a vast fantasy world. Your party can have up to five members of your choosing, all of whom will have differing stats and abilities. Such as a Ninja who uses an array of stealth moves and bleed-inducing projectiles; or a Warrior who can deal high-damage and riposte incoming attacks. All starting classes also contain passive abilities that naturally effect the game, the Hipster class allowing you to access merchant items long before you’re supposed to. How very witty.

Combat is one of the game’s biggest focuses and you’re greeted with a very familiar set of tools to work with. The interface is simple, utilising only the left click button to attack, cast magic, choose targets and access your inventory. Battles do tend to move quickly, working on a random turn-based system similar to the likes of Final Fantasy X. The biggest compliment I can give is that the battles themselves never feel like a chore, which is often a rarity in this genre. The fights are usually broken up with funny dialogue that really helps to characterise your enemies. Or if not’s attempting comedy the game will often throw-curve balls, like the Paper Knight randomly showing up and literally throwing more enemies and hazards at you.

These small touches keep combat interesting, even when you’ve fought the same lowly minions countless times. Some enemies will present a challenge but XP is plentiful and all of a character’s moves can be accessed at any time if you have a skill point to unlock them. Once you find your character’s trump-card move, battles can become little more than casual stops on your quest than life-threatening encounters that truly test your strength. The mage’s chain lightning in particular can become pretty devastating in the early stages, by level nine it was capable of wiping out entire lines of enemies in one hit, which did make progression easy, but it felt a little shallow when I knew that any encounter was a breeze as long as I kept my mana bars full. 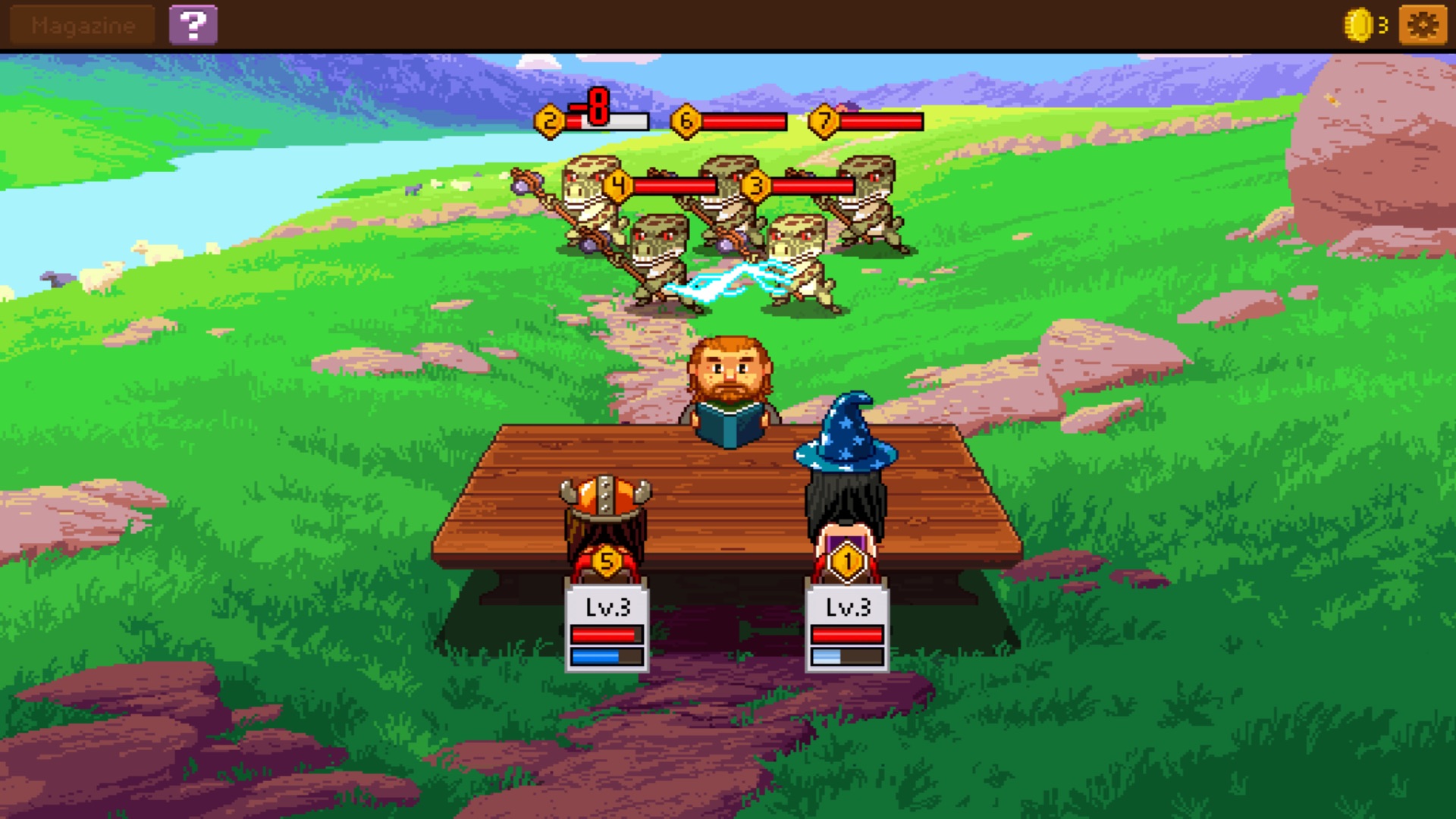 Creation of your party is one of Knights 2 more unique areas. You start by choosing your base character, which by the logic of this game is along the lines of Surfer, Hipster or Goth. This is then built upon by what race they are playing as, (i.e. human, dwarf) and then finally their class which tend to be the more traditional RPG fare like Warrior and Thief. Careful consideration of these three base stats can lead to some truly devastating combinations that allow great success in the early stages of the game. My Cheerleader Dwarf Cleric in particular was a capable of dealing high damage and replenishing my party’s health and mana with each strike, often giving my party a great strategic advantage.

For a game in which the protagonists do nothing but sit around a table for the entire length, it never gets dull or loses its joyful energy. The dialogue between characters and enemies is very quick-fire and loaded with pop-culture references that vary from the obvious to fairly obscure. The fight against the Toxic Scavenger being one that stood out to me as it shows the creators have a very fine taste in films, that is depending on who you’re talking to. From there we get subversions of the usual fantasy villains, all of whom are rendered in finely detailed pixel-art. The battles themselves do lack a little in the animation department, but this is in keeping with the game’s table-top design so it’s not a huge sticking point.

Also true to its D&D roots, there’s a large emphasis on the rolling of D-20 dice to determine the outcome of events. These range from item discovery to travelling between areas. It’s an automatic action that is taken by the game that the player has no direct control over, often keeping you on your toes between battles. If you are given a bad roll during an excursion to a nearby village you’ll be ambushed and thrown into battle. At times these can seem a little harsh, particularly when you’re having a streak of bad luck that culminates in most of your party dying before reaching a new settlement. You can counter-act this by camping overnight, but even the effectiveness of this is controlled by the random dice rolls.

Knights 2 is ultimately a charming little throwback to turn-based RPG’s of yesteryear with plenty of references and post-modern awareness to make it a surprisingly endearing experience. It won’t appeal to all, but for those who enjoy a turn-based RPG, there is enough quick-fire humour and hidden depth to the combat to satisfy. It’s a little slow to start, but once you’ve completed the first few main quests and get into the real meat of the game, it becomes something truly great.

Funny, charming and very addictive, Knights of Pen and Paper 2 is true indie delight with a great sense of humour. Highly recommended for fans of turn-based RPGS.