The boss rush genre has become a starting point for many indies now, allowing studios to focus on tightly designed moments of awe, rather than creating a long adventure which can sag and dip throughout. Does Thunder Lotus’ Nordic quest to appease the Gods result in a tale that bards will sing about for many years to come?

In Jotun, you play Thora, a Viking warrior who dies an ignominious death, meaning that she does not reach Valhalla and get to party with all the other Vikings who died by getting a battle-axe to the temple. In order to reach the afterlife of mead and endless slaughter, she must trek through the nine Realms and slay the five jotun to please the Gods and get that seat at Odin’s feasting table. There is nothing else around that story really, you get snippets of Thora’s life and death through narration whenever you clear a themed area, as well as general explanations about the areas you explore, as all of them are based off locations from Norse mythology. So, you will be trekking up the World Tree Yggdrasil, checking out the body of the giant Ymir and saying hi to Nidhogg as you delve into the depths below. The narration is very well done, with it being read entirely in Icelandic, giving, a sense of authenticity to the adventure Thora is going on. It is just enough to keep you wanting to see more of the world, but not so much as to become grating or over-bearing. For a boss rush game where you are basically just questing between themed zones until you fight the big baddie at the finale, it provides that extra push to see you to the end of the journey.

Along with the authentic Icelandic narration, the other thing that really sticks out about Jotun is just how beautiful it is. This whimsical yet grand aesthetic that Thunder Lotus has managed to pull off with the hand drawn visuals is breathtaking at times, with some of the vistas of still, frozen lakes and the starry northern sky being just a sight to behold. The eponymous Jotun are the real stars when it comes to design, animated like the Titans from Disney’s Hercules. The cackling lightning Jotun is nothing like the raging fire Jotun with his beard of molten magma, thanks to the individual animation styles for each elemental giant. The soundtrack is a good ‘un as well, switching from wistful melodies when crossing over icy plains, to thundering drums when fighting the more malodorous Jotun.

For all these striking visuals and fitting soundtracks, the gameplay simply does not measure up to the presentation. The combat is as bare bones as they come and besides a difficulty spike with the final boss, the Jotun are an absolute joke to fight. Their attacks are so easily telegraphed and fall into a set pattern that even if you die on the first attempt, you will know exactly what attacks are coming next as soon as you run back in, axe held high. Besides the aforementioned final boss, none of the Jotun mix up their attack rotation and fall into the exact same routine each time. They feel less like giant beings of immeasurable power and more like big punching bags who occasionally fire out a bolt of lightning or chuck a massive shield at you. It at least feels more dynamic than say Titan Souls, as Thora does gain more abilities and extra health as you quest through the Void and its nine adjoining realms but it does not change just how dull the combat is. 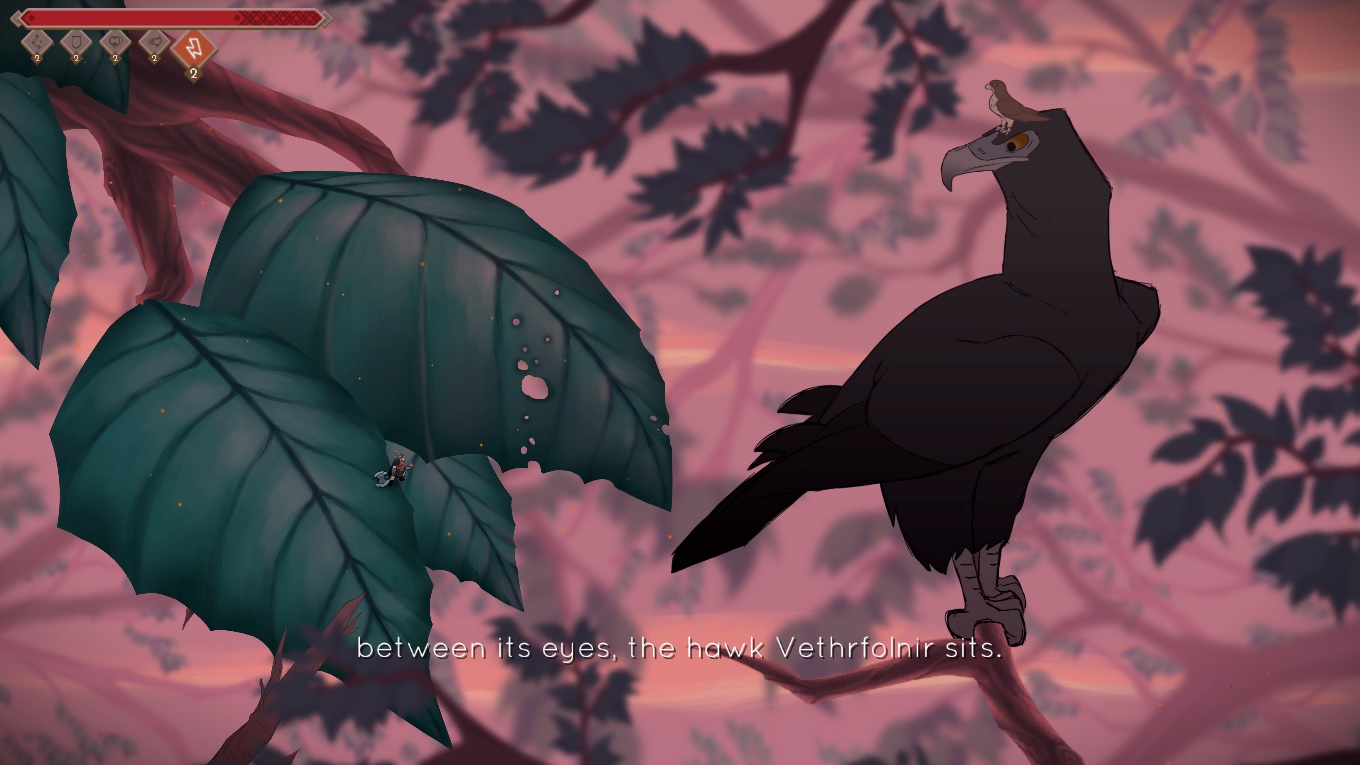 Giant eagles, huge squirrels and massive wyrms. They love their humongous beings do the Norse.

Thora has two attacks, a fast swing and a heavy strike where she lifts her axe above her head and brings it down with great force. You can’t combo fast and heavy strikes into each other and the heavy swing has such a long start up, that your foe has probably walked off by the time you bring the axe down. Thora does have a dodge roll but it is so stunted and short that it feels ineffective. Your general movement is so slow, thanks to Thora’s low walk speed and crappy little dodge roll that you feel less like a deadly Viking warrior and more like a fat guy at a medieval fayre, trying to wave a claymore about. You do get God Powers, which are consumable spells that can slightly up your mobility or give your moves more clout but they don’t add much to the otherwise dull battling. You can only get a maximum of three uses of each spell and by the time you have them all, you only have two more fights to go before your journey is over, so you don’t really get to experiment with them and see their effectiveness in battle.

Like other boss rush games such as Shadow of the Colossus, Jotun works on a hub and spoke structure, with players starting off at Ginnungagap or the Void and then trekking to each of the themed areas before taking on the Jotun in charge. You have to go through two preliminary areas first, which contain special statues that give you the God Powers, golden apples of Ithunn which increase your maximum health and a rune piece, which unlocks the way to the giant encounter. Each area contains a rune piece and requires you either to simply get to the end of the area or clear a puzzle to collect the rune. You may be striking electrical switches to create constellations in the night sky or you could be dodging a massive sea serpent on top a frozen lake, it depends on each location. These areas suffer from the flaw that the boss rush genre has at its core, that traversal and getting to the boss is nowhere near as fun as fighting the boss itself. While some of areas in Jotun are good (the root surfing area is a personal favourite), the majority are either completely devoid of life or are full of piddly little enemies which the game’s combat system is not designed for you to fight all at once. The last two areas are an absolute chore and really slow up your final push to vanquish the last giant so you can finally get to the party in Valhalla. 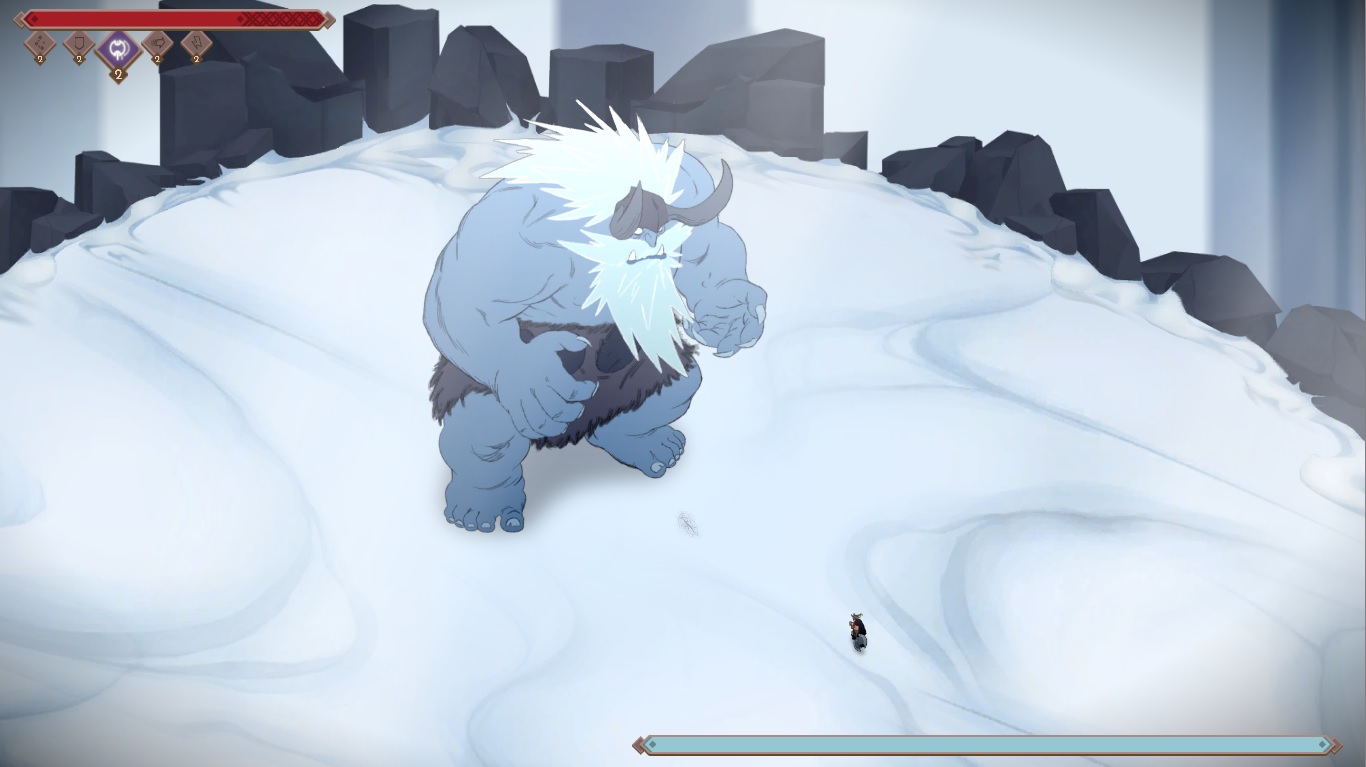 Be cool Thora. It’s your third giant of the day, no big deal.

For all this talk of slaying giants, climbing World Trees and ascending to Viking Heaven, Jotun is painfully short. Collecting all the God Powers and golden apples, I finished the whole thing in just shy of four hours. Currently, there is no New Game + mode and no real reason to return to the Void once you finish the first playthrough, as all the collectibles are so easy to find that you will have most likely got everything on your first time through with no trouble at all. I was maybe expecting a bit of a twist near the end, maybe you having to fight the Jotun again with mixed up powers or maybe two at once but no, you simply beat all five and then a final boss that you can see coming from a mile off and then credits roll. From what I have heard, even Kickstarter backers are disappointed with the lack of stuff to do in Jotun once you complete the game and if you are buying at full price, be warned that there isn’t a lot here.

It’s a shame, as just on atmosphere alone, Jotun is a must buy. The world is so rich and captures the bonkers landscape of Norse mythology that if you are at all a fan of myths, Jotun is worth your money. As a game though, the combat is way too basic, the bosses look the part but do not have the ferocity to back it up and the landscapes you travel through are just bland mazes. Jotun is a gigantic let down.

Visuals and atmosphere can only get you so far as a game. If Jotun's gameplay matched the quality of its presentation, this would be at the pinnacle of the boss rush genre but easy bosses, dull combat and its general brevity bring Jotun to its knees.