On the surface, Hyper Light Drifter looks like your typical indie fare. Pixel art aesthetic, retro throw backs, deliberately light on plot and exposition. It has all of the trademarks of the independent scene, but when you look beyond the retro sensibilities on display, you’ll soon discover that Hyper Light Drifter is by far one of the finest games to be released this year.

Presenting itself as a mid-point between The Legend of Zelda: A Link to the Past and Dark Souls, Hyper Light Drifter is the perfect meld of both old and new-school sensibilities. There’s a great sense of nostalgia that absorbs the player from the word go but enough new tricks thrown in to keep the game feeling fresh and original. The top-down/isometric approach is a nice throwback to the days of yonder, but the high adrenaline twitch combat really helps pull it into the modern age. Things that were never possible in the SNES days are so easily done now and Hyper Light Drifter is a testament to the power of simplicity.

You are the Drifter, a lone wanderer in a world that is beautiful on the surface, but full of so much death and despair it’s hard to really see the light from the dark. The opening cut scene hints at larger forces at play, giant demi-god like creatures and a creeping darkness that threatens to consume all who come into contact with it. The Drifter also appears to be suffering from some form of ailment which causes them to cough up a lot of blood. These are all things you’re shown but there’s very little exposition past this. Much like Dark Souls, very little of the narrative is spelt out for you, you must journey through the world and see its sights to get a sense of what is really going on; and let me tell you, you won’t piece it all together in one play-through. 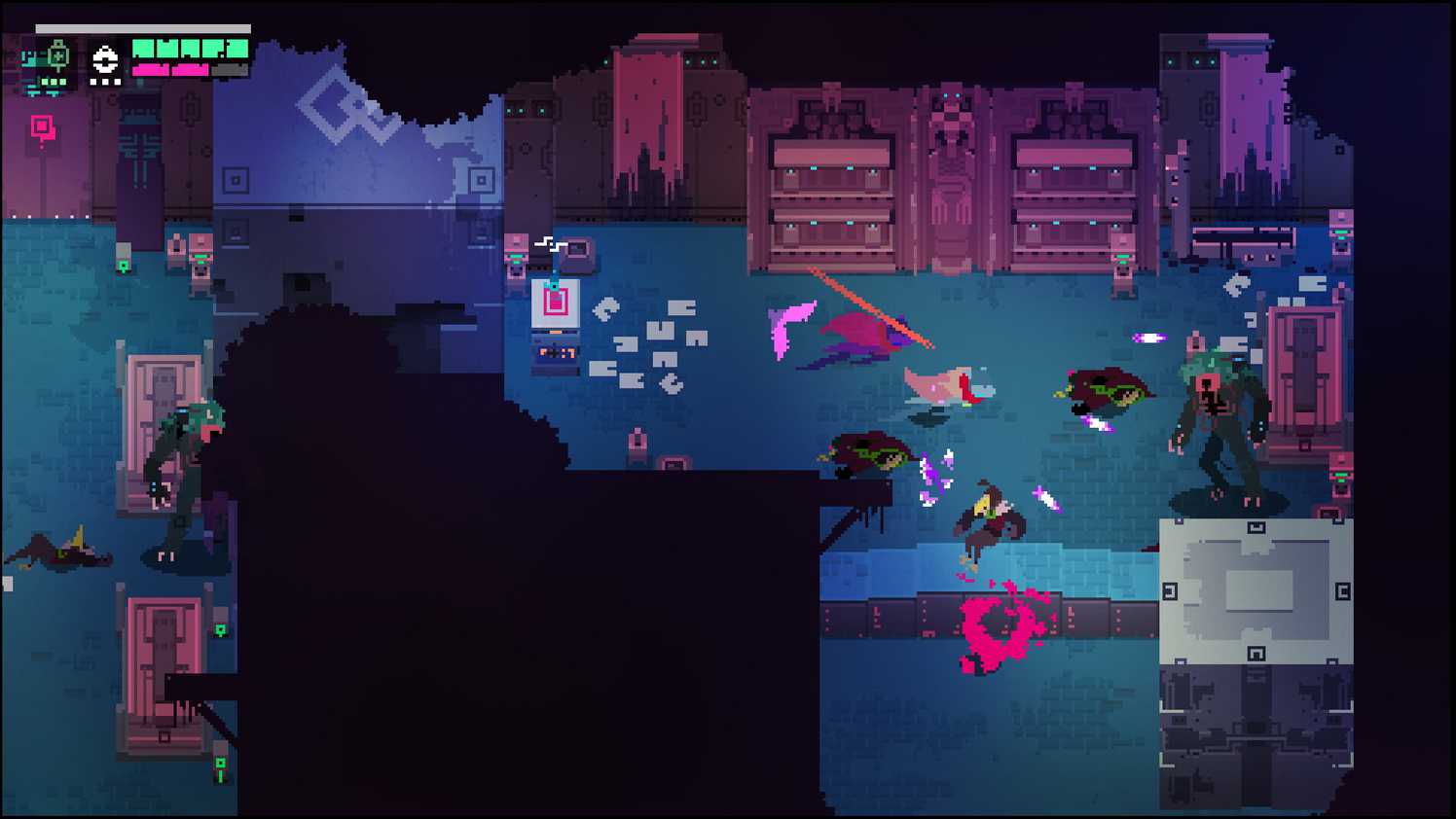 Thankfully though, the gameplay is so well-constructed and addictive that one play-through won’t be enough to satisfy. The biggest and tastiest morsel to sink your teeth into is the combat. It’s deceptively simple but incredibly satisfying. There’s your basic sword attacks and a selection of guns at your disposal. The sword is exactly what you expect, fast and efficient, but later in the game you can unlock some great new abilities like being able to ricochet enemy projectiles for greater crowd control. These extra abilities take good combat and make it great, further expanding what is possible in the game world and often changing up your entire strategy. You’ll have to earn it though, as you require Gearbits to upgrade. Each new skill can cost as many as twelve Gearbits and they’re typically hidden in plain sight; meaning that exploration is crucial to getting a decent arsenal.

The gun-play is similar to Hotline Miami, only a little more user friendly on a first time play-through. The enemies come thick and fast, so mastery of the simple mechanics is crucial to success. Don’t let the simplicity fool you though, Hyper Light Drifter pulls no punches in the difficult department and you’ll have to stay on your toes to make it out alive. Lucky for you, the Drifter has a dashing ability that can be used to dodge enemy attacks, again not unlike the Souls series, but I’d say leaning more on Bloodborne. The dash is also a compulsory element in the game’s platforming segments, requiring the player to completely understand the dash’s speed, trajectory and cool-down time. 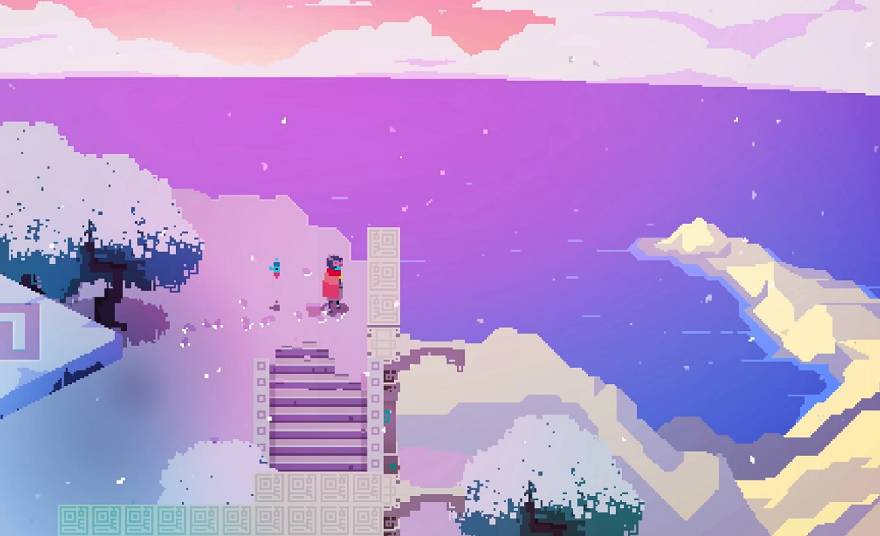 On top of the aforementioned combat, there’s a bevy of secrets to find and new moves to unlock, all scattered around the sublime pixel-art world. Every screen of the game is crying out to be explored, but more often than not, many paths can be obscured from the player’s view. It’s one of the few downsides here, that despite the graphics being a feast for the eyes, there’s often a little too much going on and it’s quite easy to bypass essential pathways that will help you progress. So prepare yourself for a lot of backtracking through the maze-like world. Made up of four unique areas, a hub -world and a final boss fight, you can explore at your own pace but certain requirements must be met before certain areas are accessible to you.

Sadly, it is this metroidvania aspect that proves to be the game’s biggest let-down. The world that is promised to you in the game’s map is nowhere near as large as you’d expect. It’s also surprisingly linear, with exploration often playing second fiddle to the combat. It also doesn’t help that game isn’t particularly long with the average completion time ranging between eight to ten hours. My own personal play-through was more on the side of ten hours, but that was in part due to me wondering around aimlessly because I couldn’t find an easy to miss pathway that was hidden amongst cluttered pixelated trees. However, there is an option for New Game+ which dishes out a much greater challenge so the shelf-time is somewhat extended, not that it really matters, once you’ve beaten the game it’s hard to not just throw yourself right back into it.

Despite some little niggles here and there with its length, Hyper Light Drifter is a truly sublime game that’s gripping from the very start. It’s bold, beautiful and dripping with an atmosphere that switches from serene to terrifying in the blink of an eye. It’s so rare to find an indie game, particularly one in this style, that is simultaneously engaging and exhilarating. The old-school style and often punishing difficulty may not be to everyone’s tastes, but it’s a game that is no doubt worth your attention.

Already a stronger contender for Indie Game of the Year, Hyper Light Drifter is an incredibly strong debut for Heart Machine. It's engaging and foreboding, showing that 8-Bit/16-Bit games can carry all of the dramatic weight of their contemporaries whilst finding new and interesting ways of mixing up the gameplay. The difficulty might be up there and it may be a bit on the short side, but it never fails to be anything but addictive and hugely satisfying. Highly recommended for fans of early era Nintendo and hack-and-slash games in particular.