XCOM’s revival in 2012 served as a welcome return, as well as a great introduction to the genre of tactical RPGs. With XCOM 2 on the way in 2016, I’m sure many are chomping at the keyboard for their next dosage of turn-based squad combat. While it may be a far cry from the gene splicing and laser rifles of XCOM, Hard West seeks to combine the tactical goodness of Firaxis’ series with an occult version of the Wild West. It may get the battles right and its supernatural interpretation of the Wild West is a unique twist on this oft-used setting, but it simply does not have the staying power to have you coming back for more after its seven or so scenarios wrap up.

As the title suggests, Hard West takes place in an alternate version of the Wild West, where your neighbourhood sheriff may have to deal with demons and rogue clairvoyants, along with outlaws and cattle rustlers. Rather than having the player follow a singular story path, Hard West’s campaign unfolds over a series of scenarios, where you take the role of a single main character and follow their exploits across the West for a handful of missions, before unlocking the next one. Many of these characters do persist over multiple scenarios, either popping up to aid or sometimes kill the star of the previous scenario, making the Hard West universe seem like a living entity, rather than just a set of separate campaigns that just happens to be set in the same location. There is a ‘choose your own adventure’ element to these scenarios as well, with decisions you make impacting who turns up or what missions you do in a future scenario. They are discrete enough to feel natural, as opposed to obvious binary decisions which make it blindly apparent to the player that this choice will effect a future story path, but they also have the problem of being a little too discrete in places. You’ll only realise a decision you made earlier in a campaign will affect the one you are currently in and even then, your reaction will be a passing ‘oh yeah, I remember that’, before moving on to shoot more cannibals in the face.

The scenario structure works well for those who maybe only have an hour or two to play at a time, giving players a succinct unit of gameplay with an intro, some overworld gimmick and a climax in the form of a boss fight or extended combat mission, before opening up the next scenario. However, it has the opposite effect of never letting you get attached to the characters you have just been playing as. Characters lose all of their equipment and experience whenever you start a new scenario, even if the next scenario has you playing as the same person, making any character connection fleeting. You don’t get that personal link to a character like you would in a title like Ogre Battle or Fire Emblem, where you’ve seen one of your troops go through multiple battles and become their own force of nature. Instead, it’s more pump and dump, as you watch your character riddle a town full of bullets, to either lose all their equipment, never see them again or blow their head off in the next scenario. 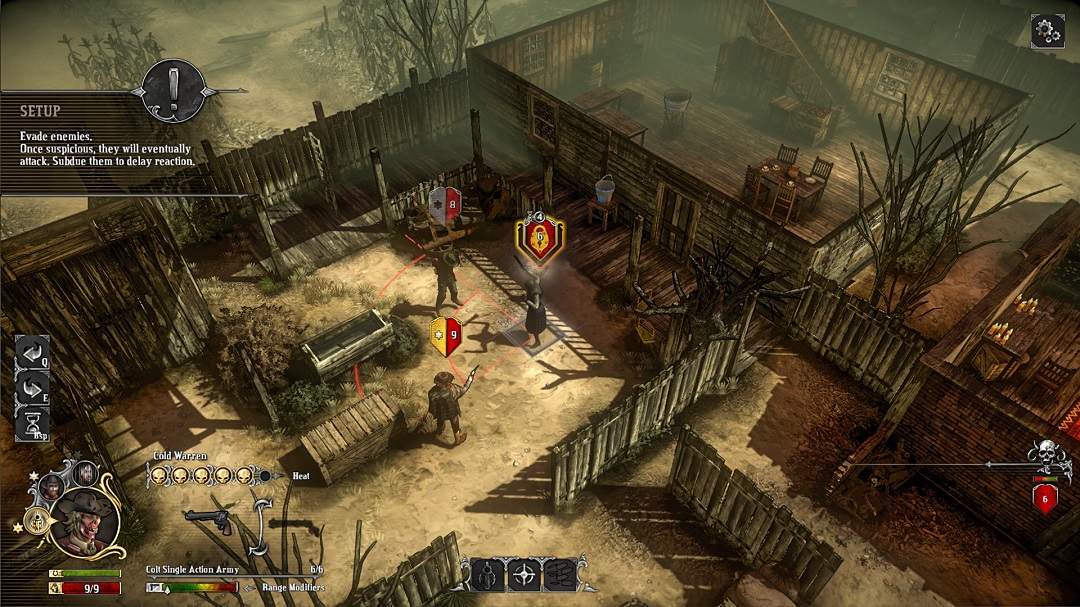 Expect to sneak past many a stick up, just to unload a hail of bullets from the shadows.

As for the actual make-up of the scenarios, they are divided into separate combat missions, which are accessed via an overworld screen which expands and contracts based on your actions. As previously mentioned, every scenario has its own overworld gimmick, with you being tasked to sometimes mine for gold at set places, collect pieces of a compass to find a secret location or cause as much havoc as possible in order to get the attention of local crimelords. They all seem different, but the way you interact with these gimmicks and the overworld itself is so tedious. You click between set locations, read a menu or two, click a dialogue option and then go to the next one. That’s really all there is to it. There is the occasional shop to buy weapons and equipment in, but the only real thing you can do on the overworld is click through various menus until you unlock the next battle encounter. It’s not like XCOM, where you can research weapons, expand your base or train up more soldiers, the only options in Hard West’s overworld is to mess around with your posse’s equipment or click through the same boring menus until the next mission presents itself. It doesn’t help that the menus are poorly optimised, with shop windows not letting your scroll to the very bottom of their items or trade windows not actively updating when you add new items in. If there was something else to do besides go on menu-based fetch quests, the overworld would have some depth to it but it is so bland that it makes the wait for the next mission such a chore.

This brings me onto the combat itself, which is not at all bland, it is in fact great fun. It matches Hard West’s brutal world very well, with every bullet having the possibility to end your character. There are no bullet sponges in this RPG, as soaking up damage could lead to debilitating wounds which will impact the combat effectiveness of your character. Taking a stray bullet or going on an excursion on the overworld could lead to a head injury, causing your character’s aim to be off for the next few missions. You have to really think about character placement, enemy sight lines and elevation when navigating the gunfights in Hard West. However, these wounds can lead to special bonuses should they be given time to heal, so putting yourself in the line of fire may result in greater rewards if your cowboy survives the next few gunfights.

There is no clearly defined class or profession system in Hard West, with character abilities being determined by playing cards which can be equipped before a battle. These cards can grant passive bonuses like improved aim or movement as well as active skills, like the ability to let the shadows disembowel an enemy hiding in the dark or giving your sniper a golden bullet which can pierce all cover and guarantee a hit on target. By mixing these skills together, you can spec your characters to fulfil specific roles like rifleman, sniper or occult shotgun-wielding demon. The added twist on this system is by mixing these playing cards to make poker hands, you can stack additional bonuses onto your character like additional HP or improved Luck. This customisation system feeds into the Wild West aesthetic really well and does make building your posse a struggle between creating the fighters you want and making the best hands to confirm additional bonuses. 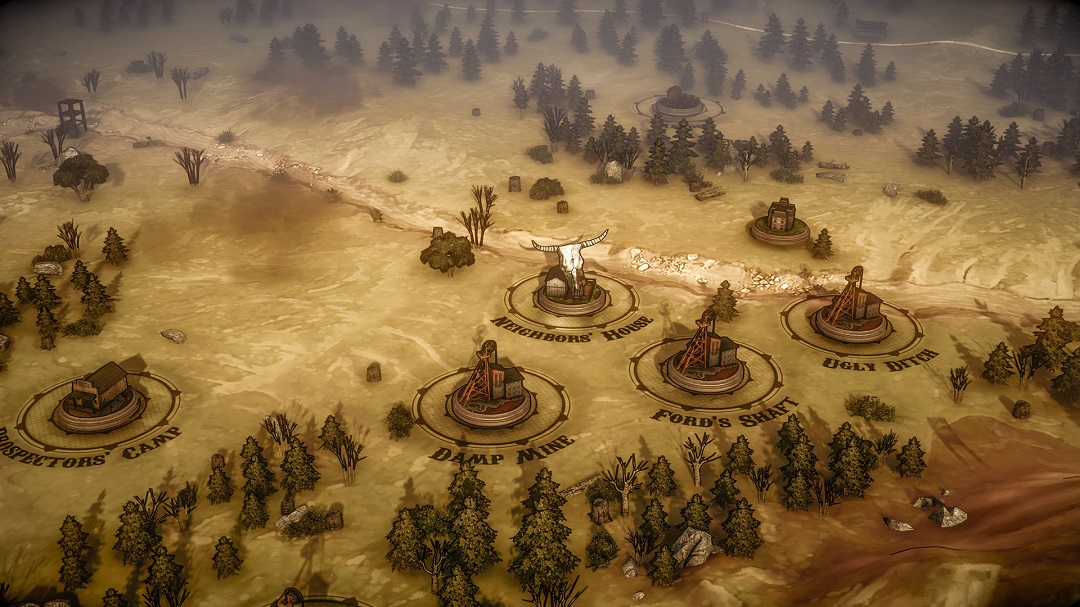 I think we’re lost. We were supposed to turn right at the rotting coyote carcass, not left.

The trade-off of this is that not only do the cards you collected in a single scenario reset when you start the next one, but weapon and equipment customisation falls by the wayside as optimal skill selection is much more important than picking your guns. Some weapons do have unique bonuses like the ability to fire twice in a single round but the set gun archetypes don’t really change that much, meaning that the only really difference between the starter shotgun and the end scenario shotgun is that you can take more shots before reloading. There are some hybrid guns like shotgun revolvers and chain rifles but these guns mainly lower your Heat score, rather than being more effective weaponry than your normal rifle.

Your Heat score plays into the Setup aspect of certain missions. On select missions, players have a setup phase at the very beginning, where they can move their posse around the map before engaging in combat. Having a lower Heat score by having more discrete weapons means that enemies don’t become suspicious of your movement as much as they would if you were carrying a whacking great elephant gun through the middle of town. However, the Heat score only really matters if you walk right in front of enemies in position while any player with half a brain will carefully manoeuvre round their foes before unloading lead death upon them. Only a few missions use this setup phase so you won’t really have to worry about Heat scores when outfitting your gang.

The missions themselves usually range between kill all enemies, hit some switches and kill all enemies or evacuate a friendly target and kill all enemies. The variety is not the strongest suit in Hard West but each mission does feel sufficiently tense, due to the raw power of almost every weapon. The Luck system which determines hit chance also helps in ratcheting up tension, as every shot an enemy misses lower your Luck score, meaning that it is only a matter of time before your Luck quite literally runs out and you end up with a bullet embedded in your skull. Active skills are also tied to your Luck so there is the extra risk/reward factor of using your remaining Luck to kill that sniper at the cost of that shotgunner making that final shell the one that counts. 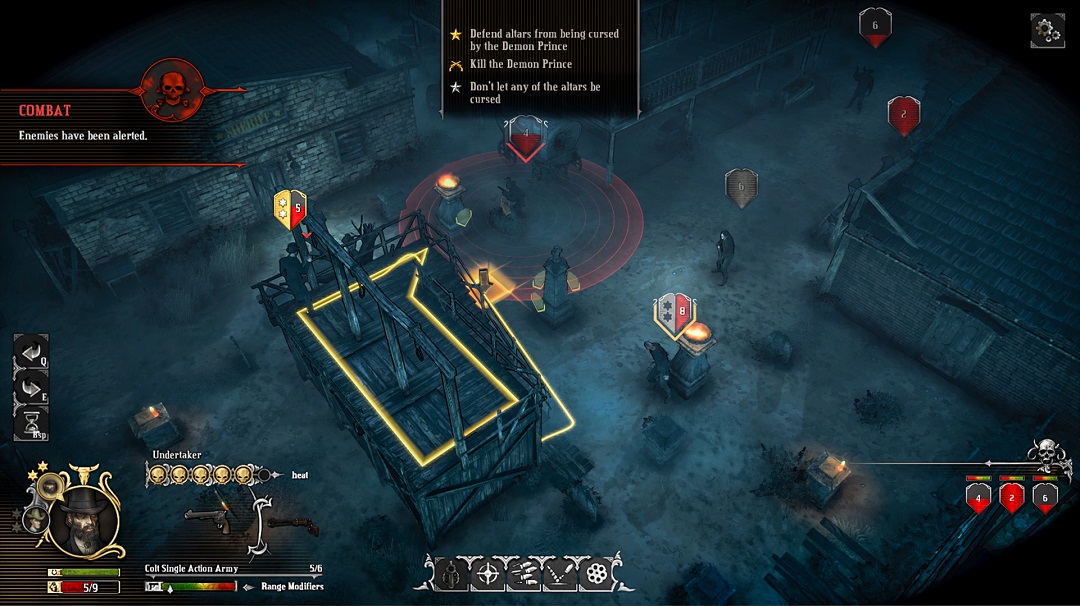 The demons you’ll find in the desert are your garden variety cloven hoof and pointy horn fiend.

Hard West’s spurts of blood, combined with the sound of people gurgling on the spray of viscera caused by that lucky pistol shot is incredibly effective in showing just how brutal this version of the West is. Seeing and hearing the final bullet in your rifle’s chamber ricochet off an anvil and cause the demon that was stalking you in the shadows to scream in pain is something that doesn’t get old, even if the twanging guitars of Hard West’s soundtrack do. The gruff narrator who sounds like he’s smoked 40 a day since birth adds that extra layer of grit to Hard West’s world, even if the overworld itself may be as drab as anything. It’s also a shame that while the overall aesthetic of a West filled with satanic priests and crazed shamans may seem interesting at first, Hard West doesn’t really do anything crazy enough to make its aesthetic really stick in your mind. The demons on show are your standard red skinned, gnarled horn demon that has been around since the Middle Ages. Besides some Nightmare levels where everything gets dark and there are a few blazing pentagrams, the art direction doesn’t really ascend past an alternative, if shallow interpretation of the Wild West period.

That really typifies Hard West if I’m honest. Everything in the game is pretty good, but it never really ascends past that assessment. The scenario layout does provide some player choice but it isn’t as satisfying as seeing your squad grow over the course of a whole 15 hour campaign in XCOM. The combat is fun and the skill system seems refreshing at first but you will soon find a card and weapon combo that works for you and you’ll never stray from that setup. It does nail all the basics but doesn’t have those little embellishments on top of a solid core to make it a really top notch tactical RPG.

Hard West does everything it sets out to do and makes an adequate job of it, but it never ascends past this point. If you're looking for a pretty good tactical RPG, you can't go wrong but don't expect to have your mind blown.