Grand Kingdom is the latest title developed by Spike Chunsoft, previous titles have included the Danganronpa series and Pokémon Mystery Dungeon Gates of Infinity. It is set on the fictional continent of Resonail, a nation that was once overseen by a regime known as the Uldein Empire. After the organisation fell, the four Great Nations that lived under their rule spent the next hundred years trying to claim the continent for themselves. These nations include the warrior clans of Valkyr, the noble realm of Landereth, the relatively peaceful queendom of Fiel and the academically inclined Magion.

The player is cast in the role of an unnamed military leader, who is charged with recruiting mercenaries to his troops, and helping one of the nations achieve their ultimate goal. The base storyline has been seen many times before, and while it does have a strong cast, it is a relatively safe journey through warfare throughout the kingdoms. For the compulsory tutorial missions, you are given a set of fighters to experiment with. Once you return to your base camp known as The Guild, it is up to you to create new mercenaries from scratch by choosing their looks and stats. The system itself functions in a similar way to the one used in similar games such as Dragon’s Crown and Stranger in Sword City, but doesn’t appear to offer anything new to the equation. Customisation of your characters is fairly extensive but certain classes are restricted by gender. An example of this is the Dark Knight who can only be male, and clothing changes are limited to a determined set of palettes. 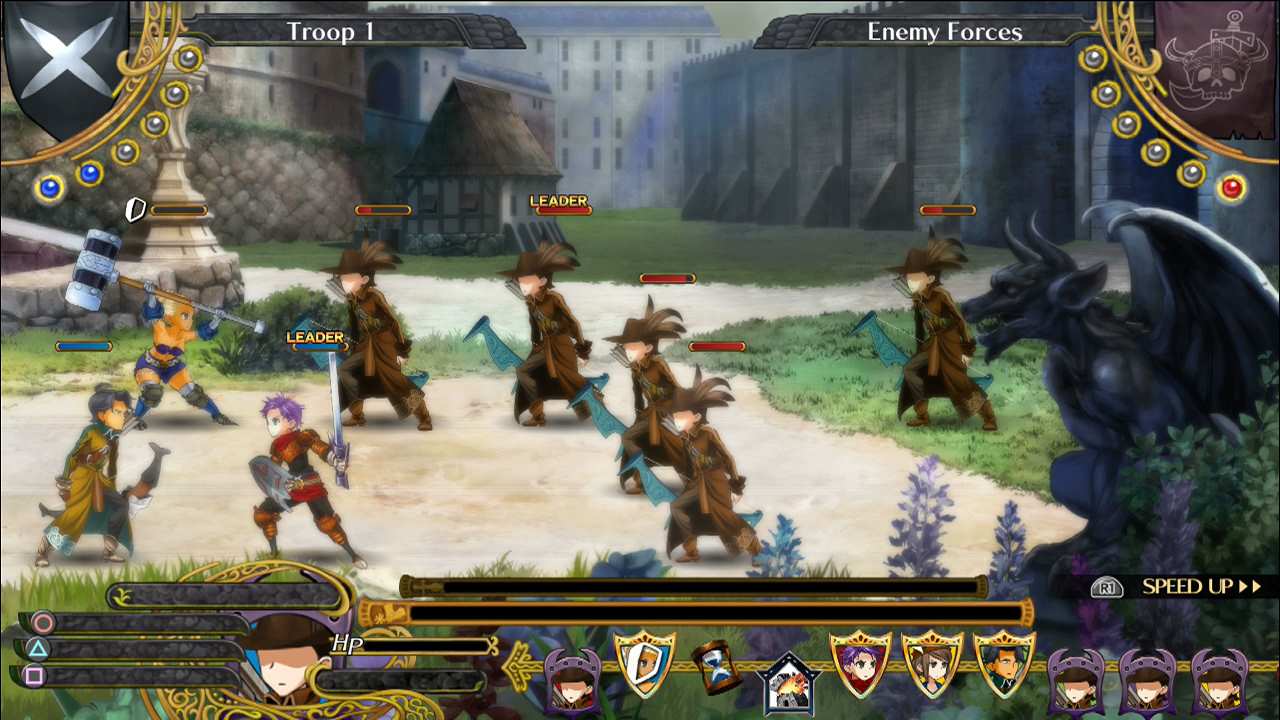 Once you have assembled enough mercenaries, you will be allowed to embark on quests. Some will progress the storyline, and other side quests will give you additional bonuses such as rare treasures. At the start of each quest, you are in control of a pawn on an isometric map, and are instructed to complete a set of objectives within a certain number of moves. These can range from reaching a specific square, to retrieving a set amount of treasures or defeating a specified enemy. On expedition, random events can occur across the map, such as traps that will need to be disarmed. You can choose to avoid these altogether or confront them directly, make the wrong choice and you can reduce your turn drastically. The variety of quests on offer will certainly keep you from becoming bored, and the sometimes brutal limits in the turn system requires you to plan your moves carefully. While the game of war is entertaining from the sidelines, it is the enemy encounters themselves that make Grand Kingdom stand above its competitors.

Exploring the battle system, it could be described as a combination of Odin Sphere and Plants vs. Zombies. While this may seem a bizarre comparison to make, it features a lane based movement system in combination with real time action based combat. The usual weapon and magic based attacks are involved such as bursts of elemental energy, swords, bows and arrows and sledgehammers, but there are several special moves that often require multiple presses of the attack button in order to succeed. My personal favourites were the bow and arrows, because the amount of damage you deal depends on how effective you are at firing in the correct direction. During battle, both sides can lay down obstacles and traps, such as a speed decreasing spider web or a trap that teleports you in the opposite direction. These traps add to the strategy needed for each battle, as an ill timed teleport can force you into the path of a powerful enemy.  The traps in combination with the reaction dependant attacks gives you a real sense of achievement when an enemy is defeated, and makes each battle feel unique as a result. My only real criticism of the battle system is that the post encounter experience distribution is a little uneven. For example, you only receive three to five points of experience in the early battles, and in order to level up, you will need to defeat at least fifteen encounters. So unless you decide to make your technical attribute higher than the heavens, your characters progression to becoming stronger may take longer than expected.

As you progress around the various maps, several groups of mercenaries align themselves to a certain nation will approach you. There are several groups that choose to help anyone who follows their allegiance, or will help regardless of your loyalty but may sometimes require a fee, such as a group of travelling nurses known as the Healing Sisters. One of the biggest mechanics in Grand Kingdom is the process of signing an exclusive war contract with one of the four nations. This will earn you greater rewards and deepen your bond with your chosen kingdom when you defeat their enemies during quests, be warned though the penalties will be steep if you choose to betray their trust. Nearly every mission in the game will change the way you are treated by each kingdom, your greatest friends could quickly become your mortal enemies depending on your choices. As well as fighting your computer controlled opponents, it is possible to take your troops online to face your friends in real time combat, or collaborate their resources to obtain stronger equipment for their troops. When I tested the game with a few online battles, I found that there were no major issues with latency, and the co-operation mechanics worked well alongside the regular gameplay. 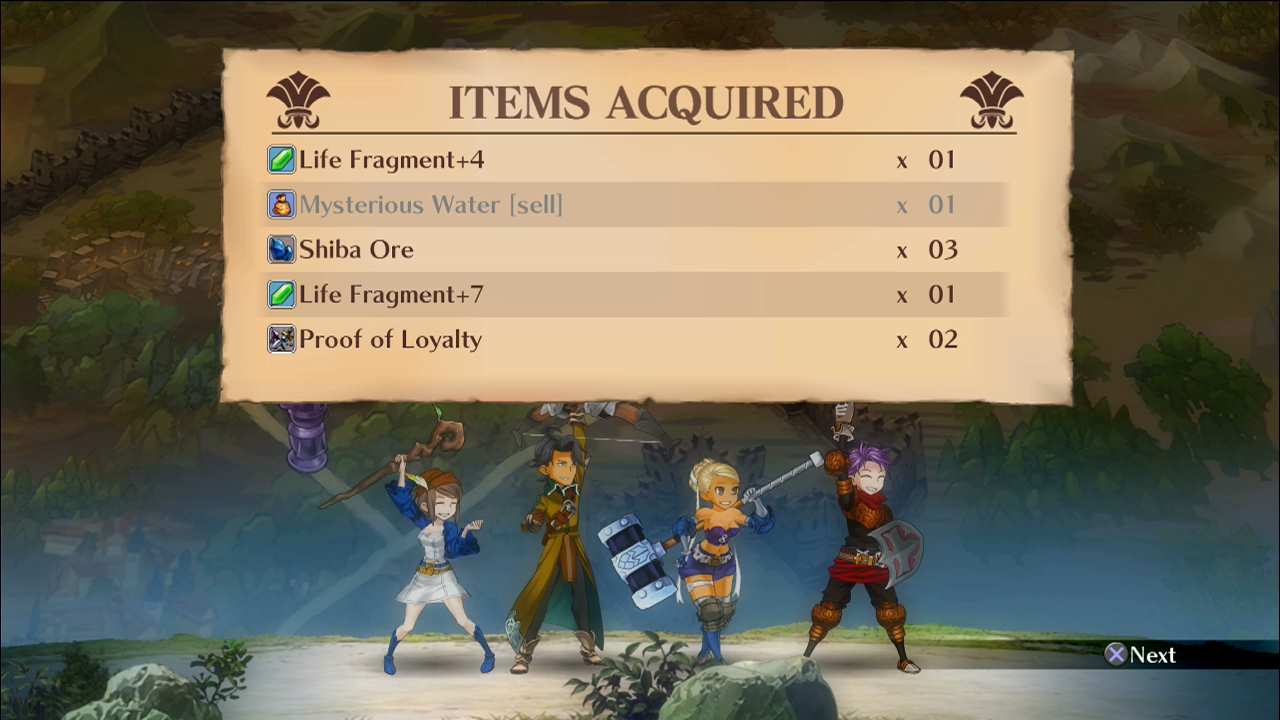 From a graphical perspective, Grand Kingdom uses cel-shaded backgrounds that have been previously seen in titles such as Dragon’s Crown. The characters are portrayed using static portraits during cut scenes, and a vibrant anime styled character sprite during battles. These different styles blend well together, and inject a sense of wonder into the game’s medieval setting. If you are wondering whether or not Grand Kingdom features a voice track, you will be pleased to learn that most cut scenes do offer a choice of English or Japanese voiceovers. Both dialogue tracks are of an equally high standard, but for some reason, it is not possible to choose your language before the game begins, so you will be stuck with the English dub until it is possible to open the menu, which may discourage some of the fans who prefer the original voice work. Alongside the voices, you will find a high quality orchestral soundtrack, with the battle theme in particular offering a dramatic accompaniment to your many skirmishes in Resonail.

War, what is it for good for? In the case of Grand Kingdom, it is a highly lucrative endeavour, with a number of interesting mechanics such as nation based loyalty and fast paced real time battles to keep you returning to the battlefield time and again. While the story doesn’t break any new ground, and  there are some issues with the initial experience distribution being uneven, Grand Kingdom is a worthy strategy title aimed at anyone who has played strategy games such as Fire Emblem. Overall, it is a solid addition to the PlayStation 4 library that deserves every bit of attention it receives.

If you are looking for a competent strategy adventure that offers a challenge and an interesting battle system, Grand Kingdom offers everything that could ask for.