GOD MODE is a 4 player co-op 3rd person shooter which is set in Hades (hell in a toga basically). You play an undead warrior trying to break out of hell… and that is really all there is to it. If you are a fan of stories in you games don’t get your hopes up here, the game will tell you hardly anything about what is going on, your only connection to the story is a flamboyant disembodied voice which will reveal small titbits here and there throughout the course of the game, as well as at the start of each map telling you how your character died this session. Stung by deadly insects 375 times? Farted and blew up a building? These are just a few of the ways you died and it is never explained how or why you got sent to hades which is very odd but can be forgiven. This really is a game meant to be played so you can just shoot tons of underworld themed creatures with three other players, a story isn’t really needed. It’s worth noting that you can set up a game for yourself offline to learn about the game but it is nothing compared to the online co-op play which is the real experience of the game. 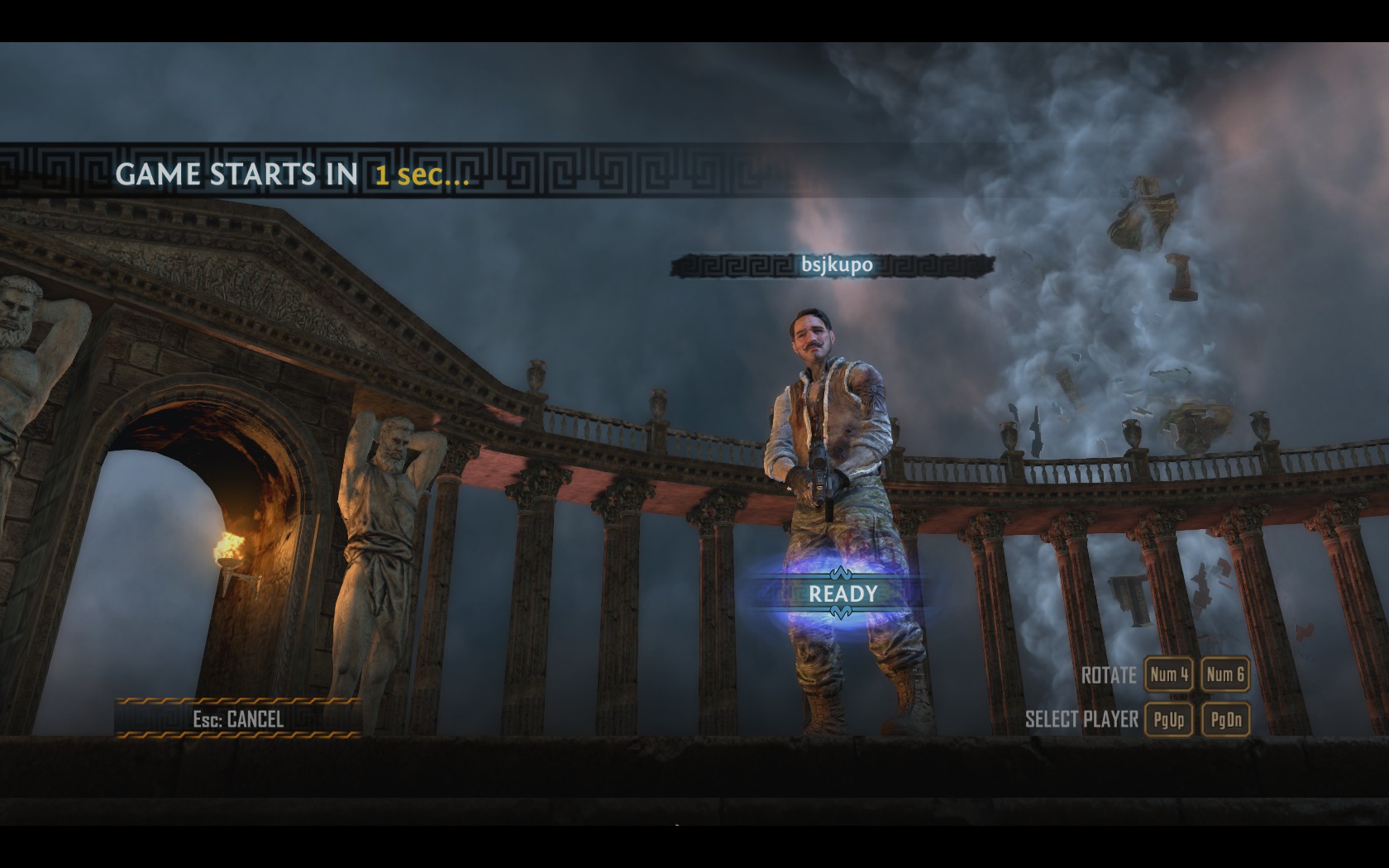 When you jump online there are a total of five maps to play though which is initially a bit disappointing, the maps are quite long and do have extra areas but just five? Surely that’s a bit lacking? Well, yes and no. The best thing about GOD MODE is its aesthetics’; the levels look wonderful and have very large and memorable set pieces in them which make them really quite something to be played in. As you progress in the levels they reveal more and more interesting areas for the player to see, from watching giant demons crank a huge machine in the pits of fire next to where you are fighting to giant statues of gods battling above them, there is always an amazing set piece to give the levels a large and epic feel.

You may not have time to admire the scenery however as the amount of creatures trying to kill you is mental. At all times you will have a multitude of enemies to wipe out to gain EXP and coins to further advance your character so you can kill these enemies quicker and more effectively and trust me, you will need those upgrades. Some of the creatures are ridiculously strong and can dish out a lot of damage fast, combined with the influx of smaller minion creatures means that the gameplay can get really hectic and confusing. 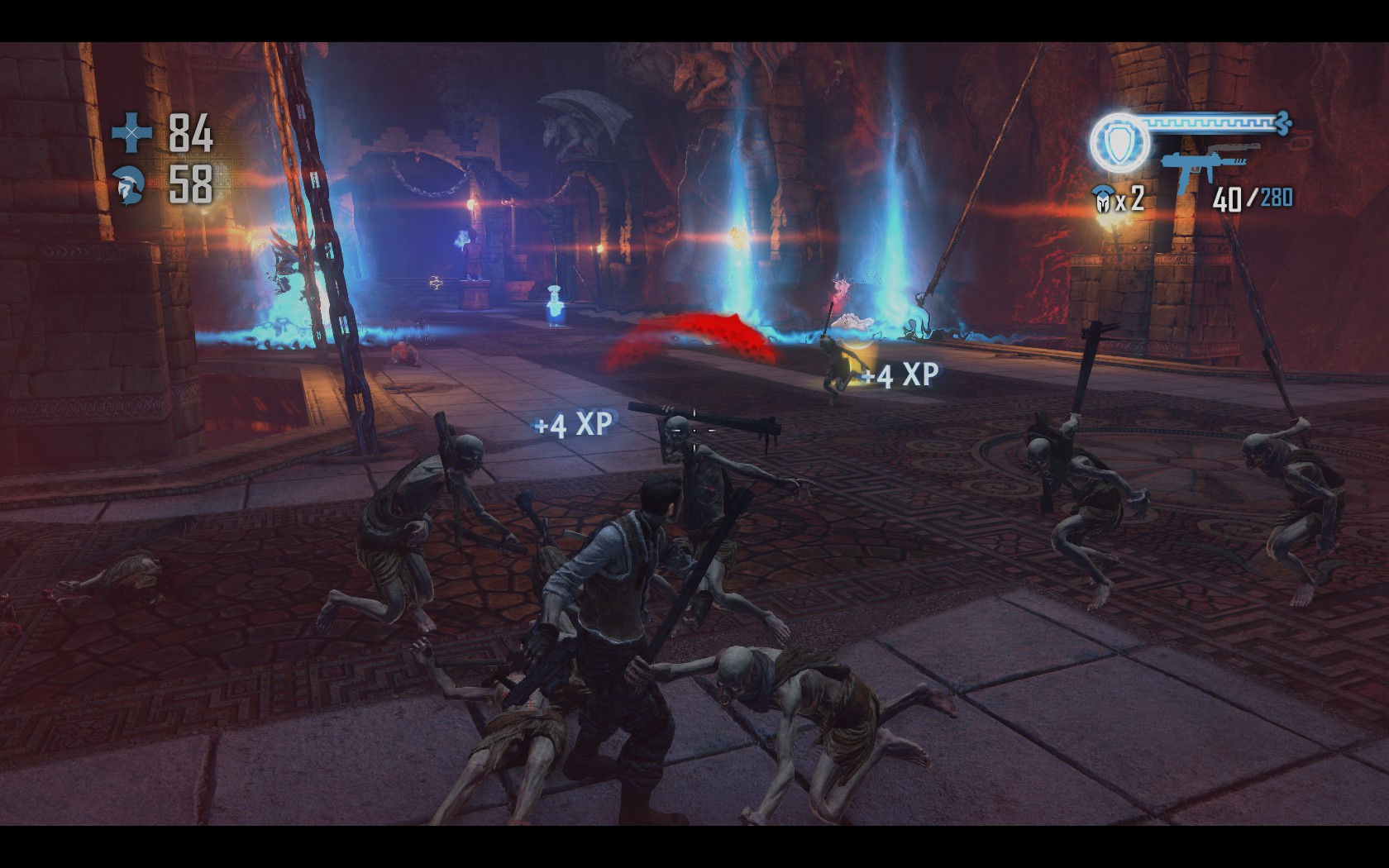 As previously mentioned, you play as a recently deceased human that has been sent to Hades and are given the challenge to try and escape by killing your way out of Greek hell. To help you with this giant task your character comes equipped with an assortment of guns to help blast the bad guys away and spice up your escape. These guns can also be upgraded via the coins you get in game and doing this is highly advised. So we have our Gears of War style of gunplay in an advancing level based structure, standard stuff, but what breaks this up is the Tests of Faith that activate at the start of each room. These tests are various mutators that can change the flow of the upcoming fight in different ways. Some make bombs rain from the sky while others can mess with the games sound settings! Don’t worry though, not all of the tests are that bad, some turn all the dead creatures into gold and can even give you GOD MODE for the whole round making it that you take no damage and have unlimited bullets which is very awesome!

Another interesting feature for the masochists out there the ability to set your own Oaths before you start a level. These give you various debuffs while playing but as you complete more level with these debuffs active you receive more EXP and gold which is a nice touch to increase the difficulty if you feel the game is too easy which some player will. From level one on bronze difficulty, I had no problems clearing the levels with my trusty shotgun and SMG with no upgrades. Yes some creatures packed a punch but I easily dispatched them and found more health, but after putting some Oaths on my character the game became a lot more intense and challenging which was much more rewarding for me to play. 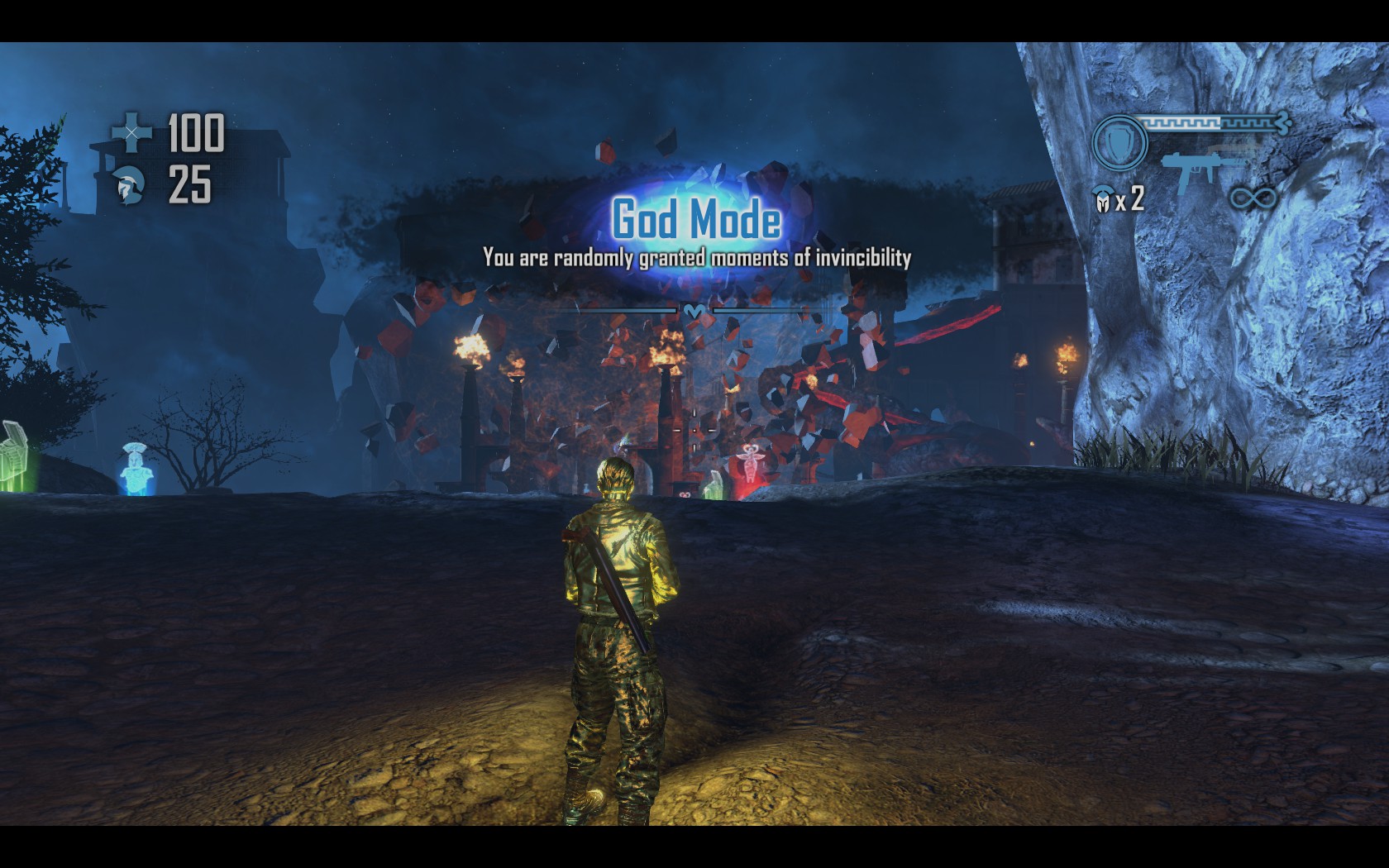 GOD MODE does look rather pretty with Greek inspired set pieces and lots of things to kill in short periods of time, they why is it not that great of a game? Firstly, while it is fun to mow down hordes of enemies with you weapons this can soon get old fast. Playing the same levels over and over again can get very tedious, especially when you are trying to grind for more EXP and more coins to get newer weapons.

However this is also another large problem, the levelling system is a bit redundant. The main reason to level up is to get new weapons and new pieces of clothing for your character but the clothes do nothing and the weapons are just as effective as your starting SMG, in fact but the time you have grinded up to and bought the ancient Greek buzz saw you could have saved yourself a ton of time by just upgrading your basic guns to max and continued to kill away with relative ease.

The combat as well can get very repetitive and is not very impressive to watch. Your character dodge rolls and runs with such nonchalance you wouldn’t think that they were (literally) being attacked by hellish demons at all, this gets even more apparent while playing co-op, you may feel like a badass, but you don’t look it. 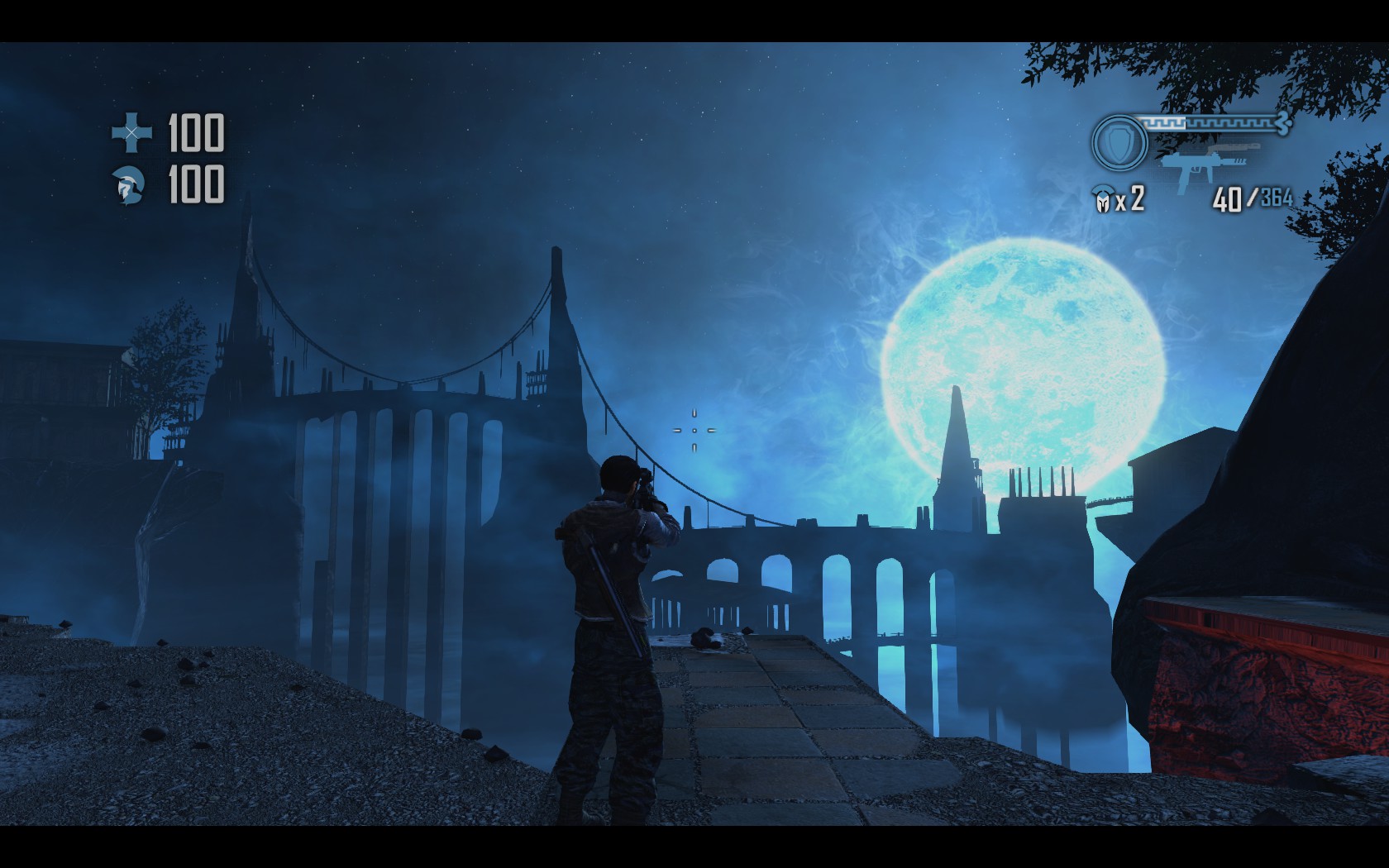 The co-op as well is also all over the place. Not being able to turn of voice chat unless you are in a custom match can grate when you have people constantly screaming down their microphones and even if you can get your head past this flaw then you have to hope the game can actually connect with other players in the first place. I don’t honestly know if it was just me but while playing GOD MODE for this review the game crashed in the weirdest places and at the strangest times, I don’t even know why or how it just did. The worst time was when I had waited 10 minutes to get into a co-op game and as the level loaded the game just froze. I can only hope this sort of thing is just happening to me!

I really wanted to like GOD MODE more than I do. It looked like it would be a much more interesting shooter than it turned out to be which is a real shame. GOD MODE is a decent game in its own right but the formula has been done before and better. The Oaths can spice things up gameplay wise and there is a fair bit to unlock but most players will not want to go that far since it will take a while to get anywhere. That being said, you could do a lot worse for £6.99 (on Steam), so check it out if you are a fan of 3rd person shooters!