Usually, in reviews, we leave the “verdict” until last. This time, however, the Fallout Board Game is a close adaptation to the video game and universe that fans will love. Fantasy Star Games has done an almost perfect job at translating what you see on the PC screen to the tabletop.

Fallout is a board game that can be played between one and four players where you build the wasteland out of hex tiles that are then explored by survivors. Much like the video game, players will be able to explore, loot, quest and fight robots, mutated creatures and other human enemies.

You’ll first begin the game by taking a fair while in the setup and learning the rules. Making it a close adaption to the electronic version means there are a lot of parts to pop out the cardboard and get ready. There includes three different stacks of cards, minute figures, tokens, monster icons, SPECIAL letters, experience pegs, and the player board for tracking equipment and experience points.

The one downside to the board game is probably the lack of organization in the box. With so many different bits and only a few plastic resealable sleeves, each game takes time to set up again once packed away because it is a bundled mess. It could do well with compartments for the cards and more bags for the tokens. If you want more organisation you can get a foam insert on Amazon for £18.

Once popped and prepped, it took about an hour for me to learn the rules and make a mock playthrough. It took a little bit longer to understand the game enough where I could teach other players more quickly.

There are two books that you are given, one goes through the “how to play” while the other is a bible of the different terms and actions that go into more detail about a particular part of the game. This helps ease you into the various rules, questing, items and flow of the overall game. 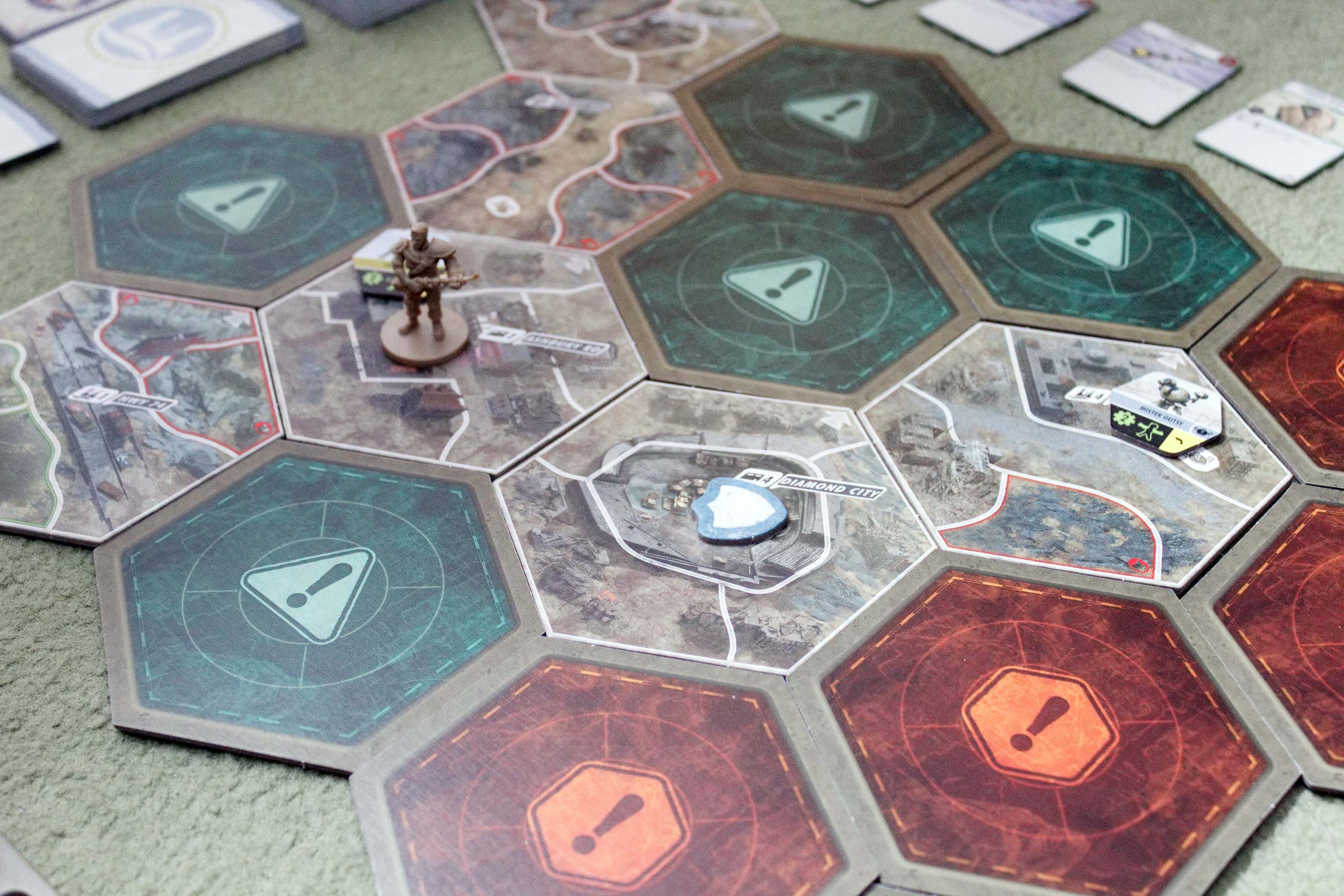 There’s also a story behind the game which makes you feel more a part of the Fallout universe. The year is 2077 and you are a member of Vault 84 and you are the one tasked with exploring the wasteland to survive and gain enough influence to win the game by gaining favour with the big players out there.

Fallout the board game is heavily set in the universe that’s for Fallout 3 and Fallout 4 as the four overall scenarios are The Pitt, Far Harbour, The Capital Wasteland and The Commonwealth.

What’s good about this though, is the quests in the game are so closely tied with the game it is what makes this adaption from screen to table work so well. Players are set with the main scenario then quest icons lead the way to develop it further with different tasks and outcomes in the deeper narrative. You then move from one part of the wasteland to the next completing quests and receiving rewards or not if you end up failing them.

With the map set up the way it is, everything is randomised on each playthrough with the exception of a couple tiles to keep things a little structured at the start. It makes the game feel fresh each time you play with monsters spawning in different locations and quest anticipating in places they were not in the previous game. 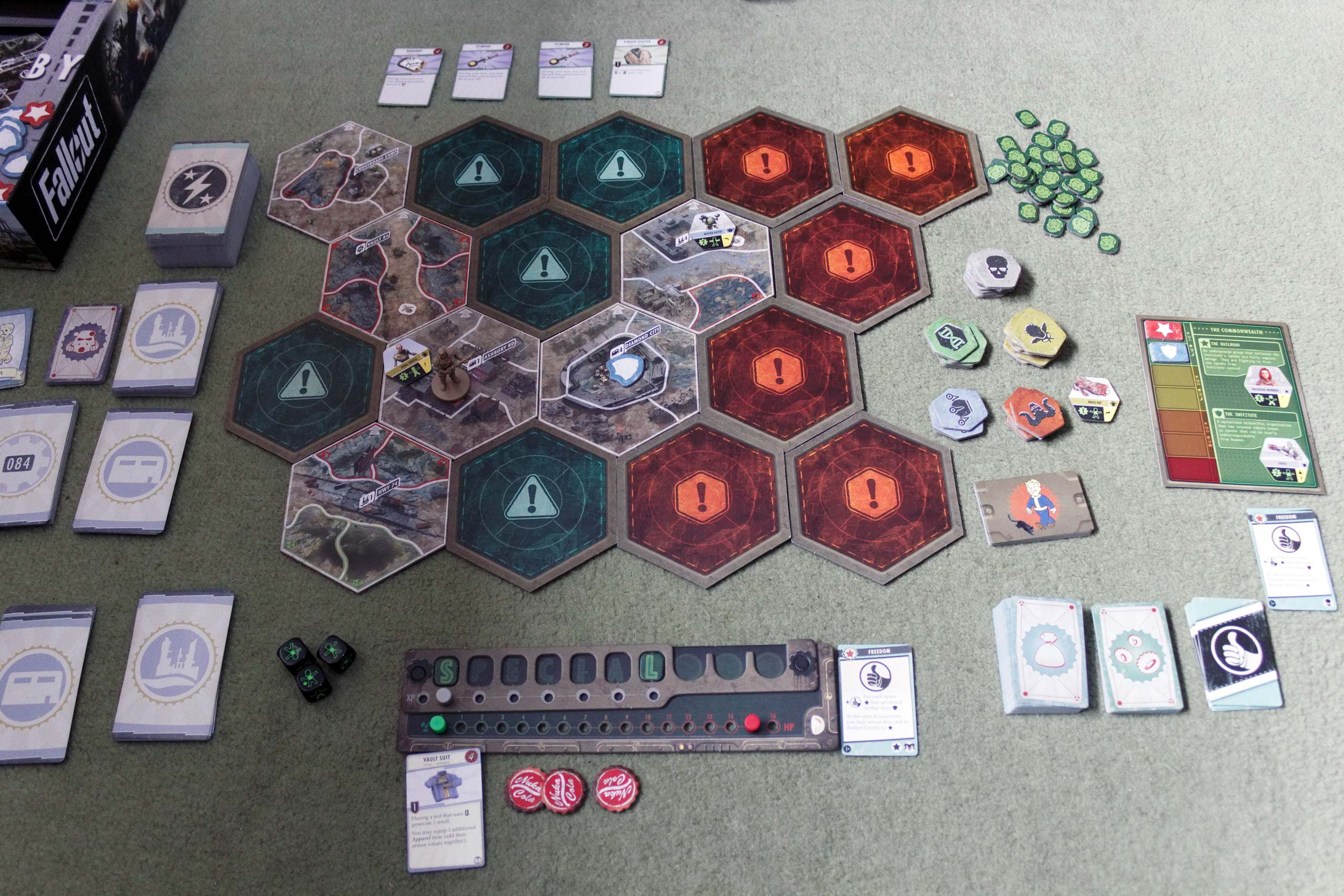 Each game is quite open to what players can achieve. At the start of your turn, you’ll be allowed two actions which can be flipping over a tile (explore), moving two spaces, questing, looting, fight a monster or camp.

Once the turns are over, next comes the “game’s” turn which means a card from the influence deck is drawn which spawns monster tokens and fights towards the nearest players on the map.

Combat is pretty simple, which is based on the V.A.T.S system in the game represented by three dice with the Pip-Boy V.A.T.S icon on it. Your main aim is to land hits in monsters vulnerable spots dealing enough damage to defeat it without taking too many hits yourself which is shown by an asterisk (*) on each dice. To kill a monster you need to completely deplete their hit points while your damage is taken from each encounter to the next. You can also reroll dice based on your S.P.E.C.I.A.L attributes meaning you can try and do more damage or reduce your own but it does not always go the way you want and you’ll still be hurt.

The red pegs on the player board are your health points and move to show your remaining life points. Meeting your end can be quicker if your radiation poisoning is higher that is shown by a green peg on the same board. You don’t really die in the game more just lose all your inventory if your health falls below your rads. The only exception is when your rads are too high for your overall health then it is game over for your player. You gain radiation as your walk through certain parts of the terrain so it is usually a good idea to avoid those places or keep a RadAway in your back pocket. 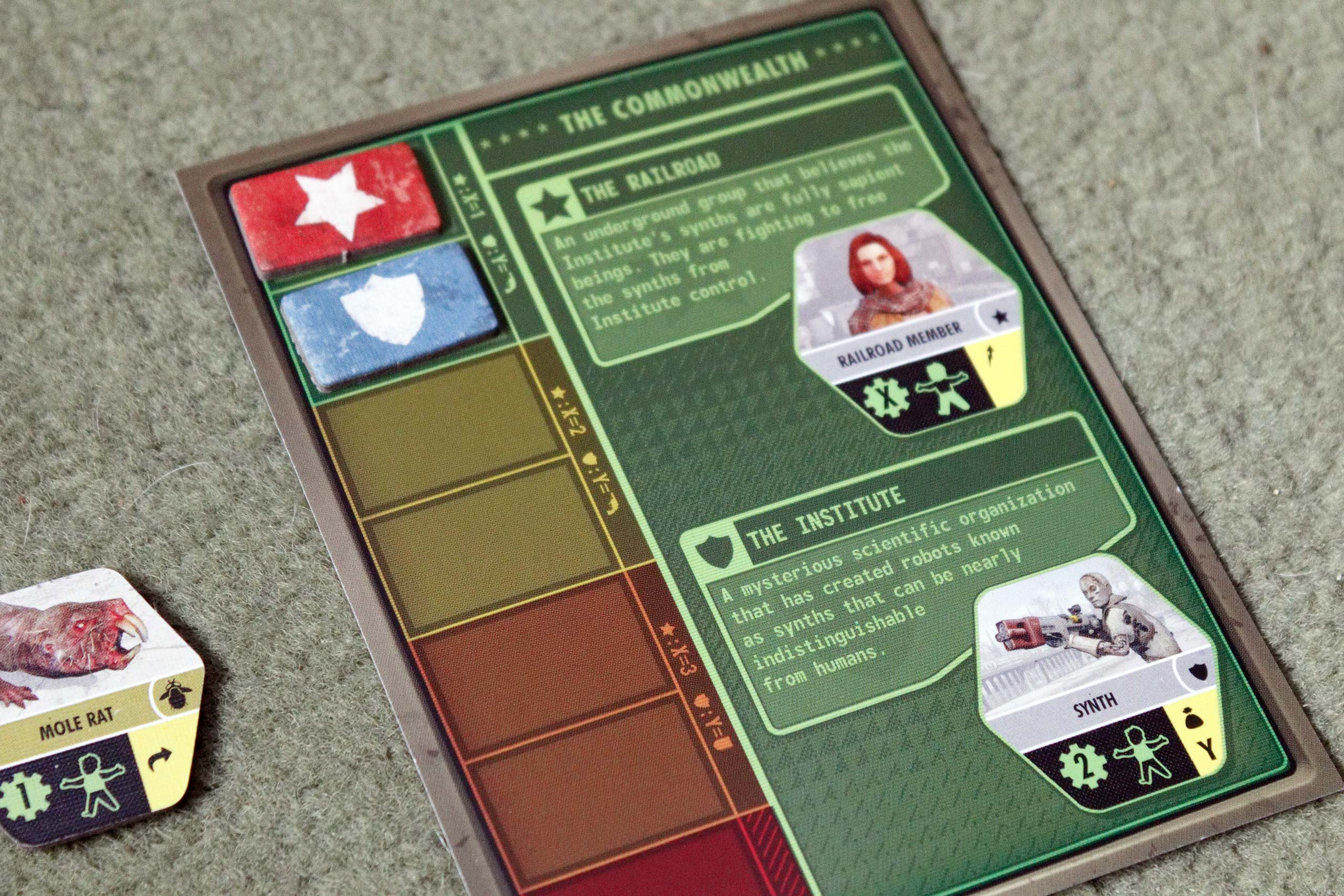 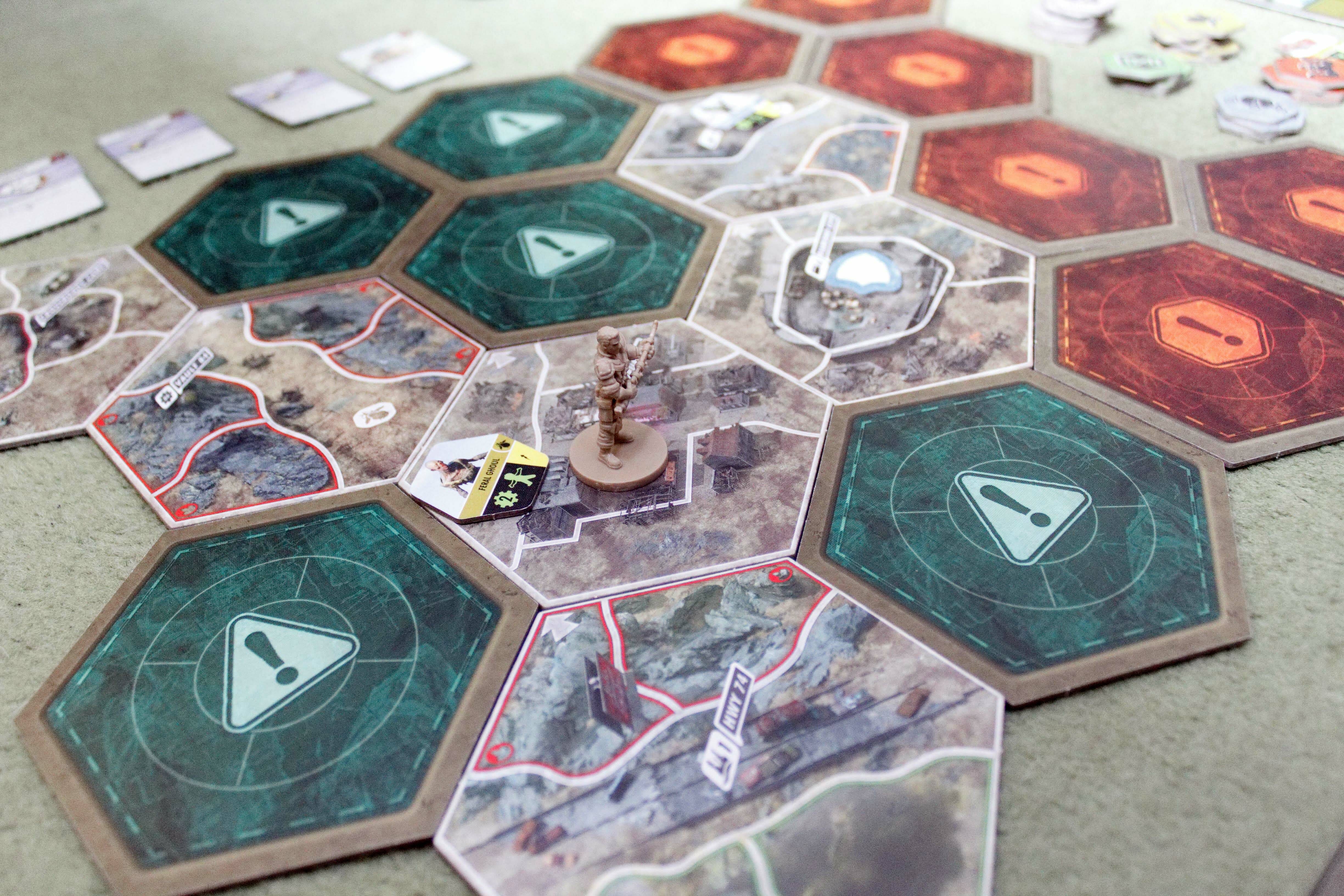 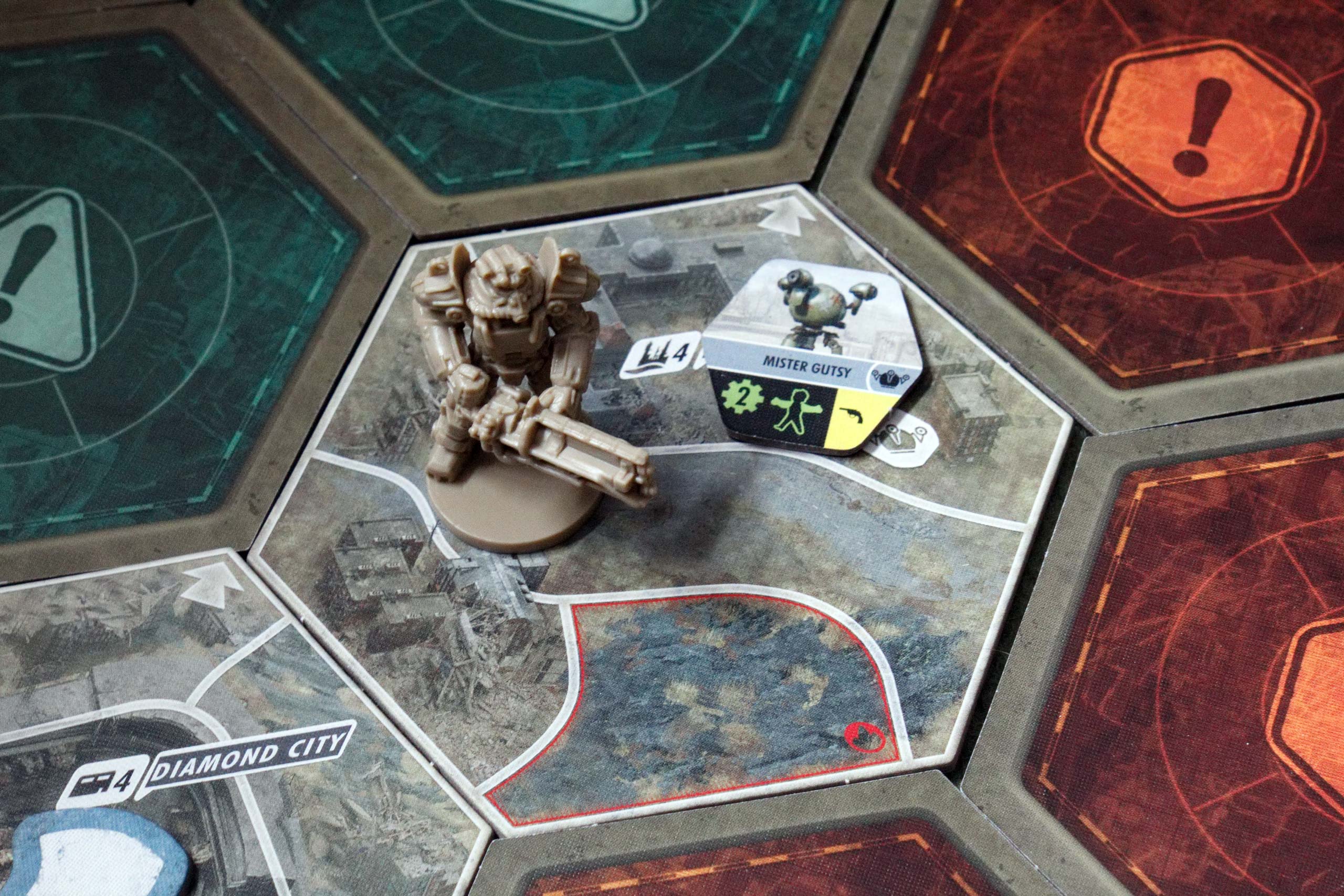 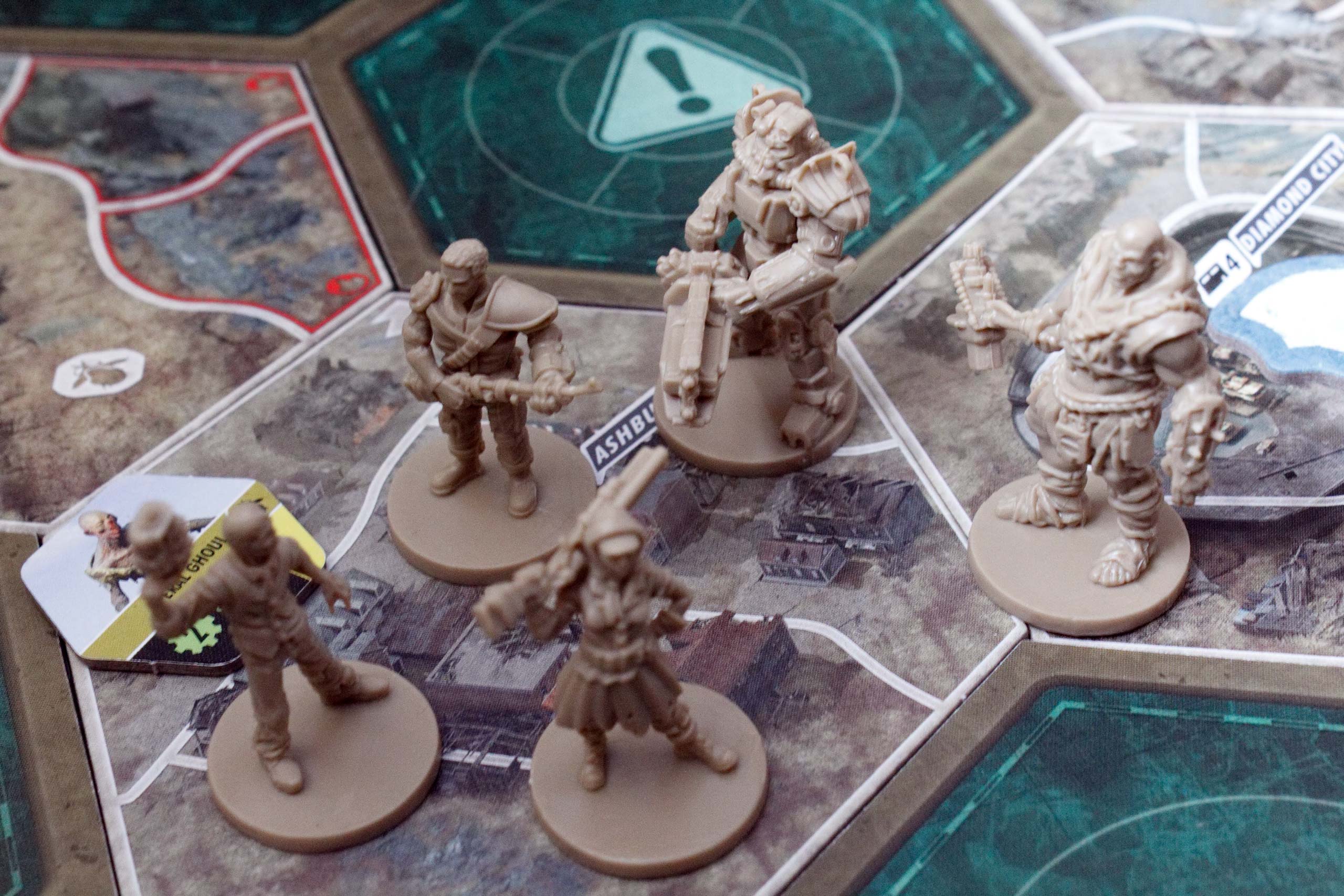 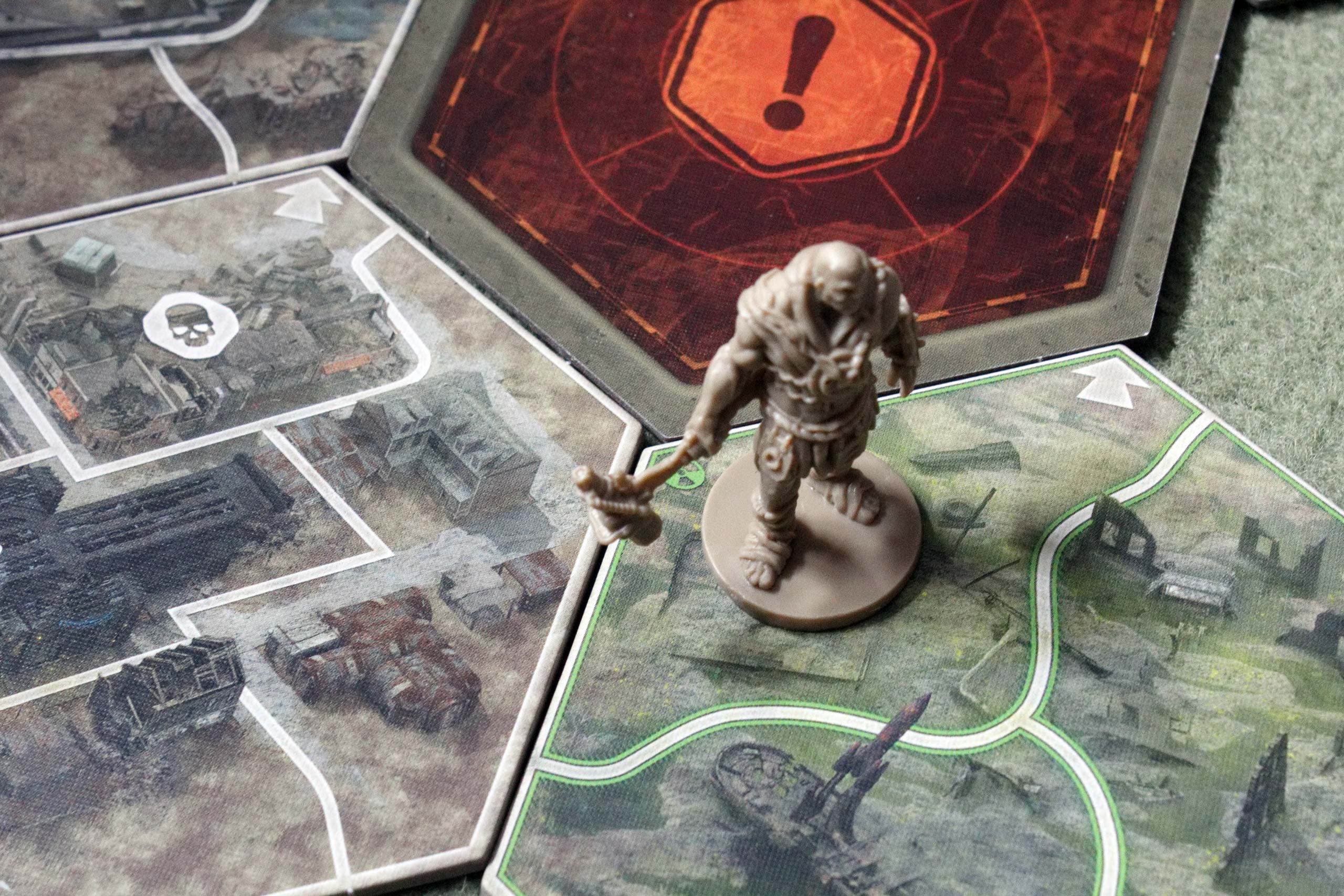 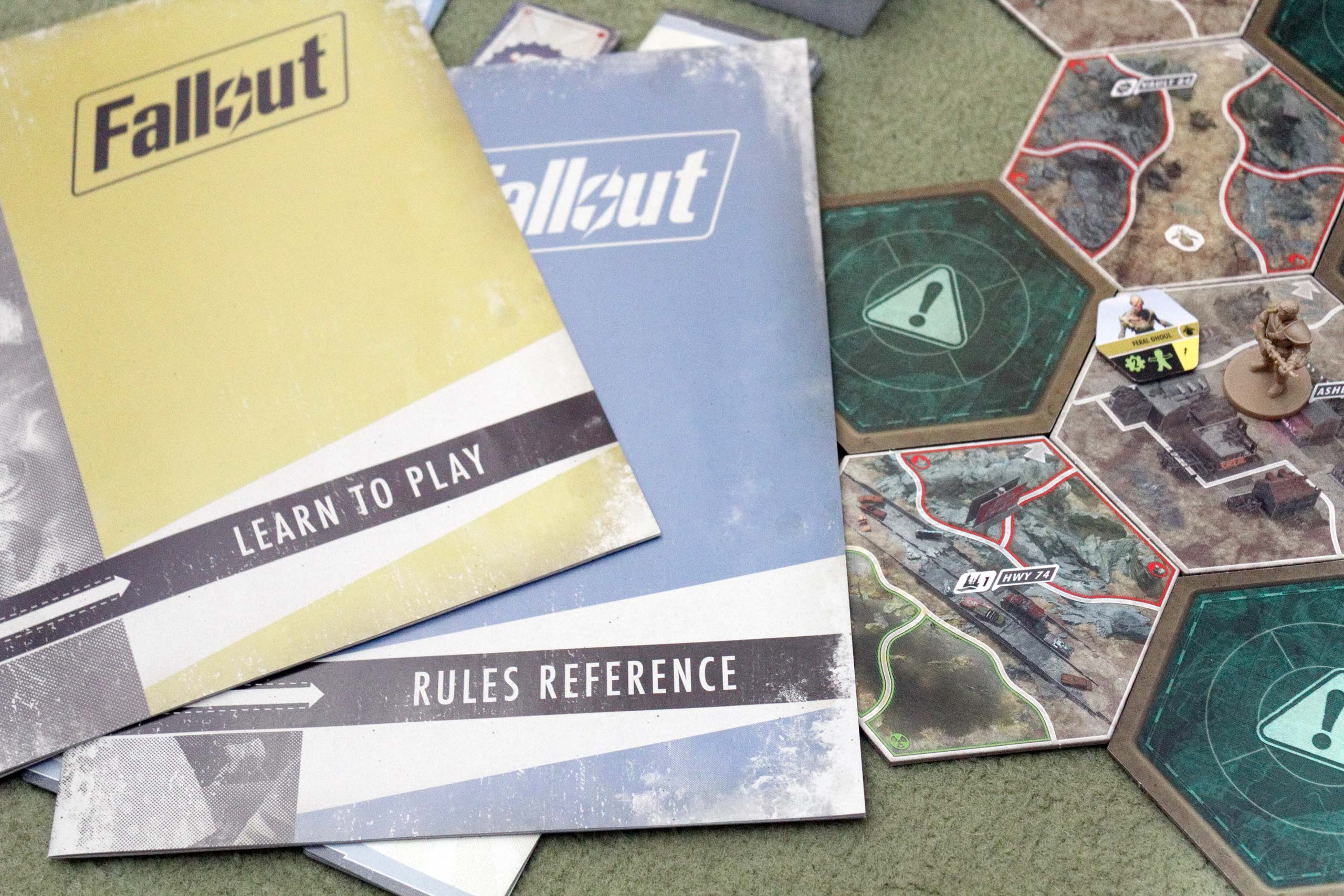 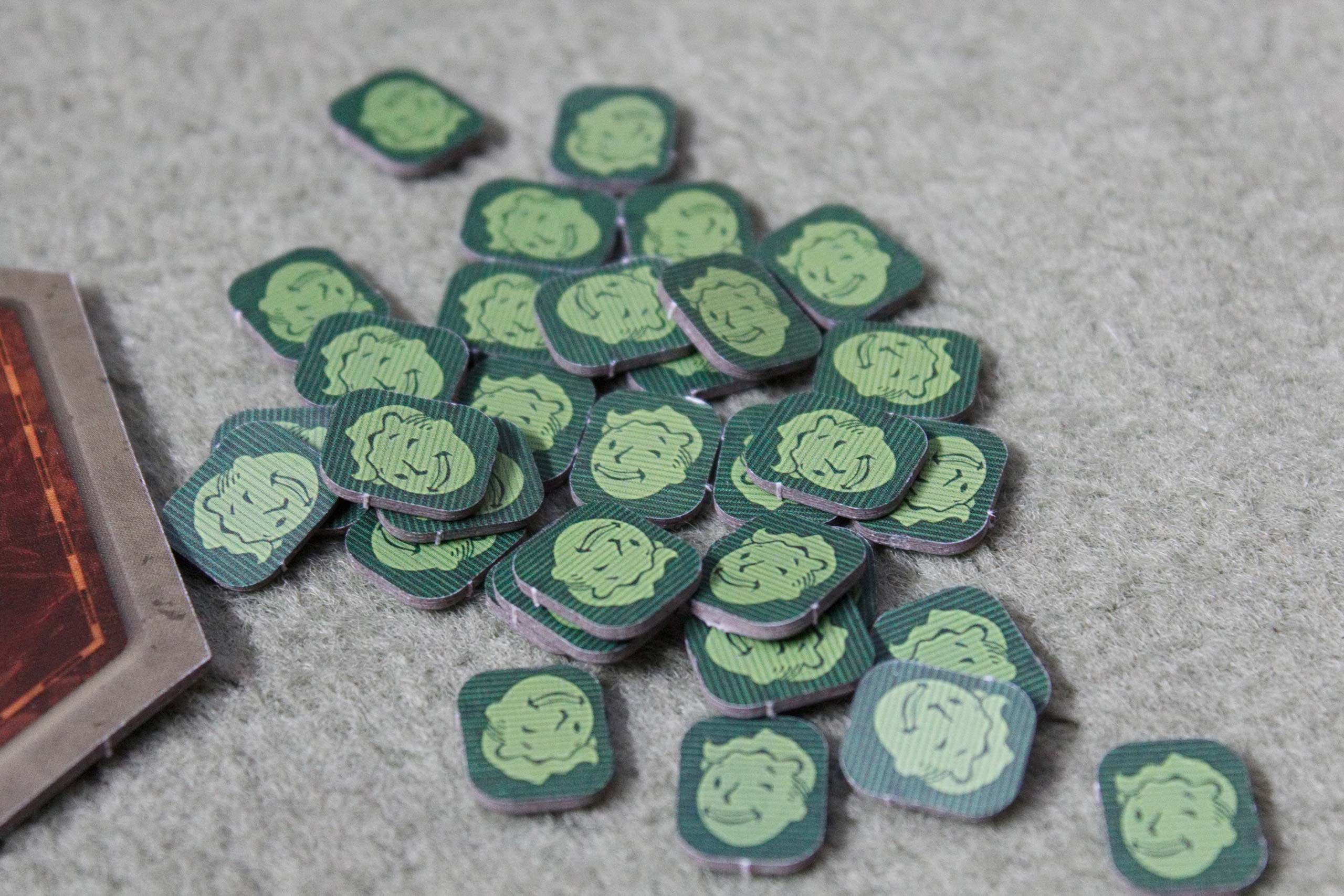 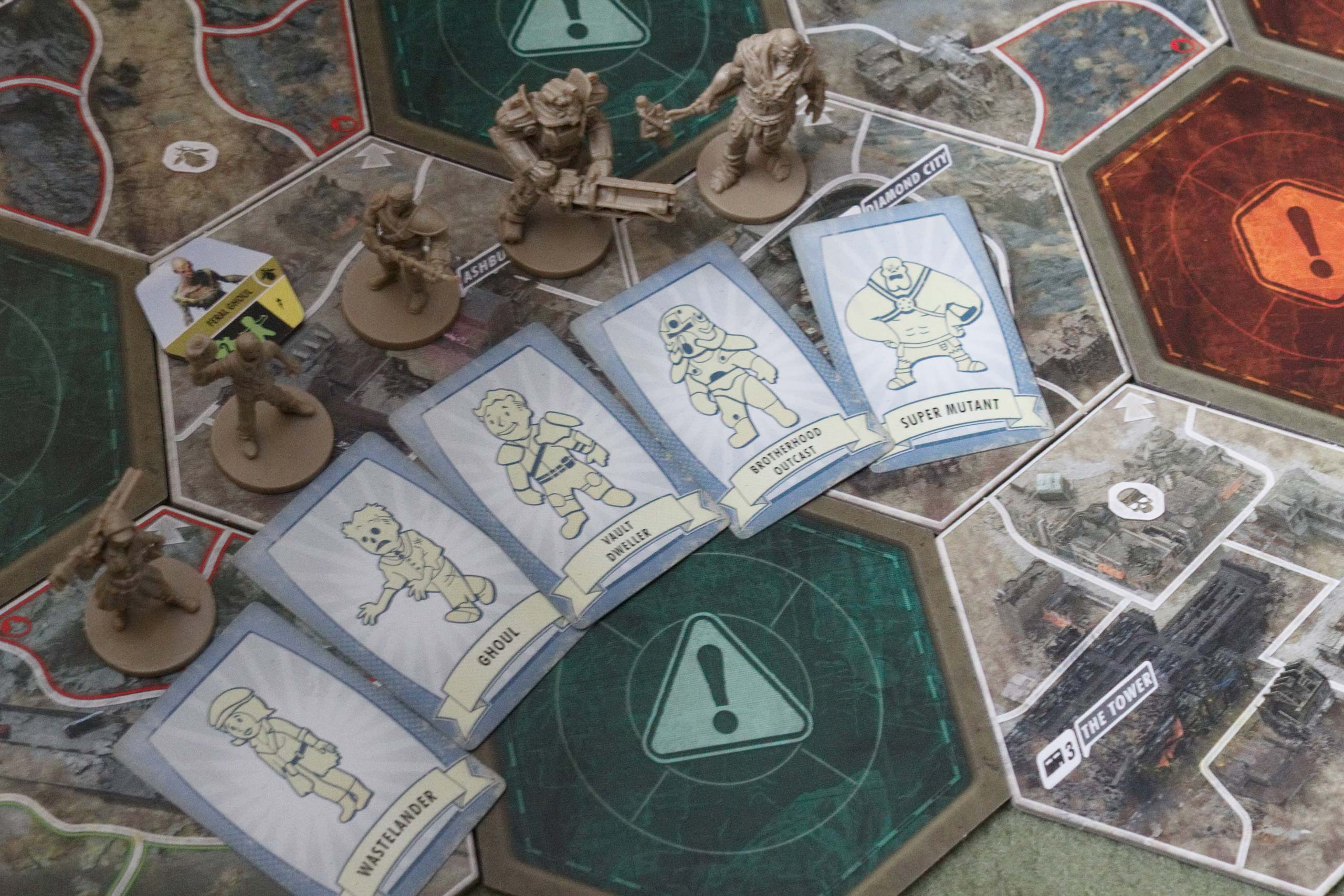 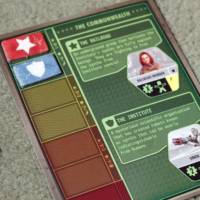 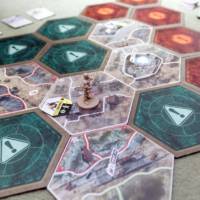 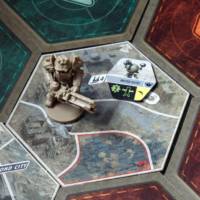 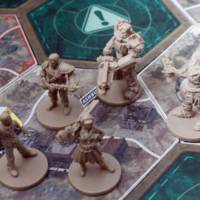 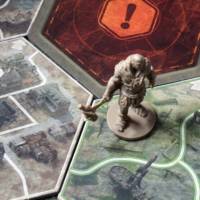 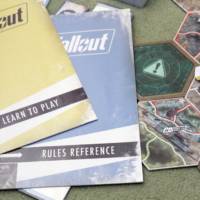 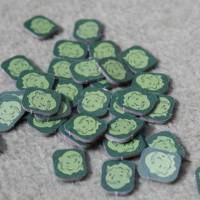 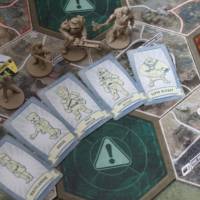 Winning the game is not about your items or how much you explore but is necessary to gain influence points that are the requirements. 8 – 11 points are needed depending on the number of players in the game and you earn them through the agenda cards by completing quests with some providing more than others. In each scenario, different factions are also a part of the world such as the Railroad or Institute which also change the course of the rewards.

On top of that, players can also pledge their alliance with one of the two factions in each scenario which mean that their enemies won’t attack those players while on the board. The endings are also tied to each of the big players on the board and becomes part of the overall story. Each of the quests is linked across all the players too which means a failure for one player impacts the world and means something different for all players as they quest. Your alliance also makes the chosen ally gain more overall power in the wasteland pushing them towards ending the game.

You can’t interact with the other players massively in Fallout, meaning no PvP but trading can happen if you are on the same tile. Your questing and allegiance to one of the main factions also have some pull over players indirectly. You could be on a tile with monsters and decide you are an ally which means the other player will need to fit them in their next turn.

What this means is a deeper level of strategy than just working together. You are all aiming for the same goal but on separate journeys only having some influence over each other which really suits Fallout.

However, as you are quite secluded in your playthrough, it makes the game well suited for single player. Turns are much quicker and at a better place when you are the one dictating the flow of each round. In single player, you can progress quickly, quest faster and go through the game at a decent pace usually lasting anywhere from 45 minutes to an hour when you take out the time learning the rules which can be an hour alone. Multiplayer rounds take longer as you are waiting for each player to complete their two actions per turn and any quests before it could be your turn again. Playing with friends, games took anywhere from two hours up to five hours.

In all honesty, the game is better played alone and that hands itself more to the video game which has always been a single player until recently. It’s probably one of the best single player board games I’ve ever played as other players just are not needed for you to enjoy each of the games various parts. You get to play the game at your pace and each quest and exploration leads to what you normally face in the actual game.

Overall the Fallout Board Game is really good. It manages to combine systems on an electronic platform quite seamlessly into the tabletop spectrum. Everything from exploring to question, combat and looting makes you feel like you are in the Fallout universe just like the video game and being able to play it on your own or with friends is a great example of decent mechanics. As far as a Fallout game would go, it is damn near perfect.

The Fallout board game is an almost perfect adaption of the video game and is enjoyable to play on your own or with friends.