Platformer rage can affect the best of us, turning once peaceful gamers into The Incredible Hulk incarnate. It isn’t even a condition regulated by skill level. Whilst your everyday platformer might not be enough to get a seasoned platform gamer frothing at the mouth, a couple of hours on Super Meat Boy or The Impossible Game will soon have them gnawing at their controller. Element4l isn’t quite on the same level as Super Meat Boy, but we suck at video games here at VGU so we had the rage.

We’re not messing around here, we’re talking serious, full-on, “you wouldn’t like me when I’m angry” gamer rage…but in a good way. Confused? Don’t worry we’ll explain as we go on or your money back.

In case you hadn’t guessed from our little diversion, Element4l is an indie platformer available now on PC via Steam. It was developed by I-Illusions, who describe Element4l as an immersive and experimental platform game, with a strong focus on flow and smooth gameplay, wrapped in an exceptional soundtrack. This is all true, however they forgot to mention it’s also a shortcut to a stress-induced heart attack if you suffer from the aforementioned condition. 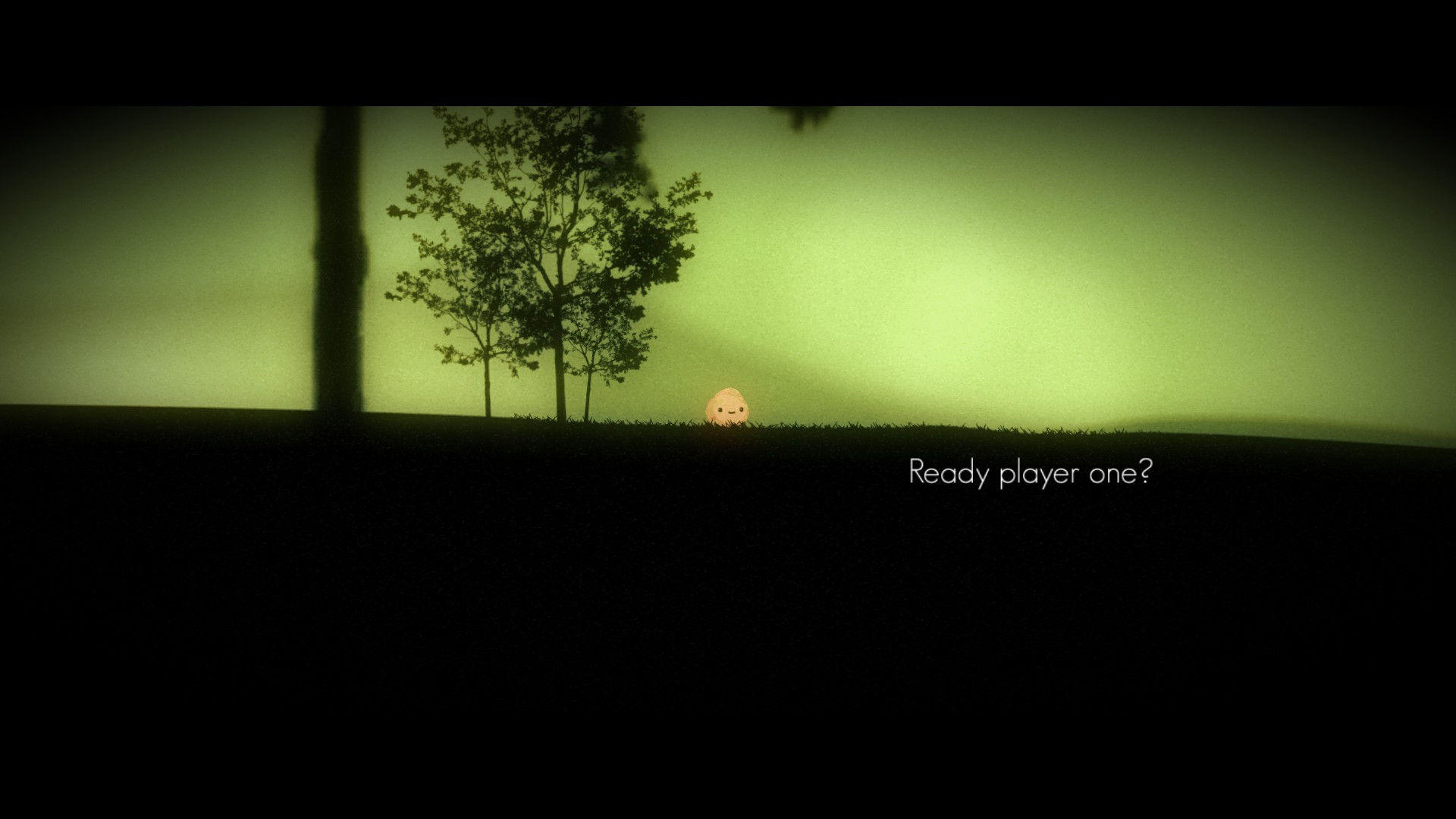 Well come on, answer the man…rock…thing.

So here’s the deal, you play as four elements who are bound together on a journey to shape life. Your element chimera is controlled by the arrow keys, but not in the way you’d expect. You switch between the four elements of Fire, Ice, Earth and Wind at the touch of a directional button. Pressing the right arrow turns you into a fireball which shoots off to the right-hand side. Pressing the left arrow turns you into an ice cube which slides across surfaces provided it has momentum. The down arrow will turn you into a boulder, which falls faster than other elements and does not move as easily as Ice. Finally the up arrow will turn you into an air bubble which can jump upwards several times. To prevent you from just using the air bubble to fly over every obstacle each element change uses up energy, which once depleted must be allowed to recharge before you can switch again. The exception to this rule is the ice block, which doesn’t require energy to transform into.

These moves aren’t all that impressive by themselves, but use them in combination and you’ll soon find yourself flying through the game world. If you find yourself stuck in a half pipe you can air jump up, fireball across to one side, then switch to the rock to fall faster, before switching back to the ice cube to get maximum slide as you land. It sounds complicated but it all feels very natural and fluid once you get the hang of things. 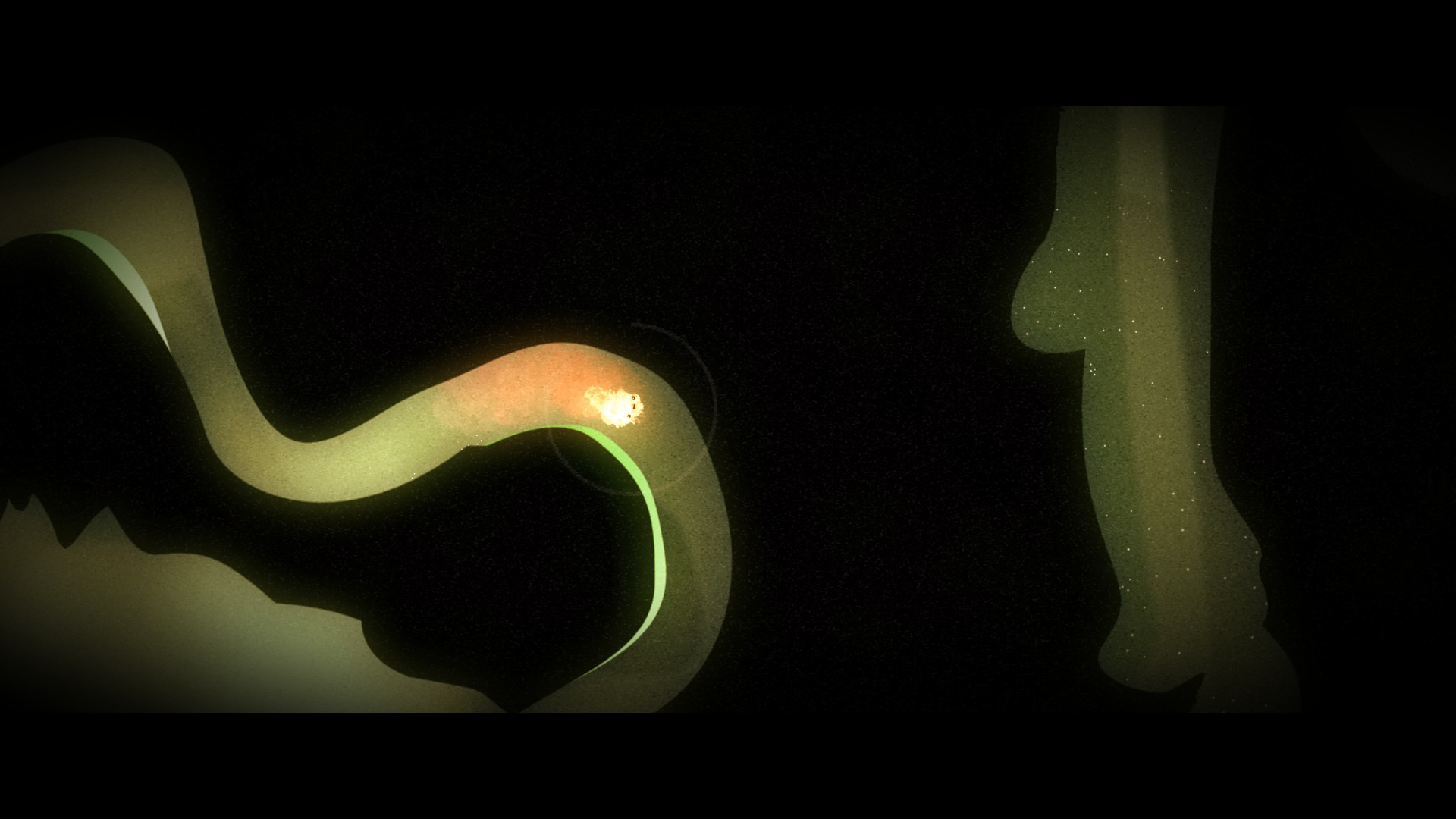 This bit reminds us more of an indigestion tablet advert than a cave but whatever.

There are no enemies to fight, only obstacles to overcome (if you’re anything like us, your own incompetence will be the greatest of your foes). These obstacles come in the form of gaps to jump over, lava to avoid, radioactive goo and the level layout itself. Unless you’re some kind of genius, many later areas of the game will require a lot of attempts, a lot of wondering how in god’s name you’re supposed to make it to the next section and a lot of crying. But eventually you’ll figure it out and all the pain will have been worth it because you will have beaten the game in a contest of wits… then the game will just throw another ‘impossible’ jump at you two seconds later and it’s back to the crying.

So yes, trial and error is pretty much the name of the game here but it’s not necessarily a bad thing. An obstacle may have you pulling your hair out for ages but once you figure it out it will never get in your way again. Overall we found the gameplay to be a very rewarding experience and the challenging nature of the game is the main reason for that. 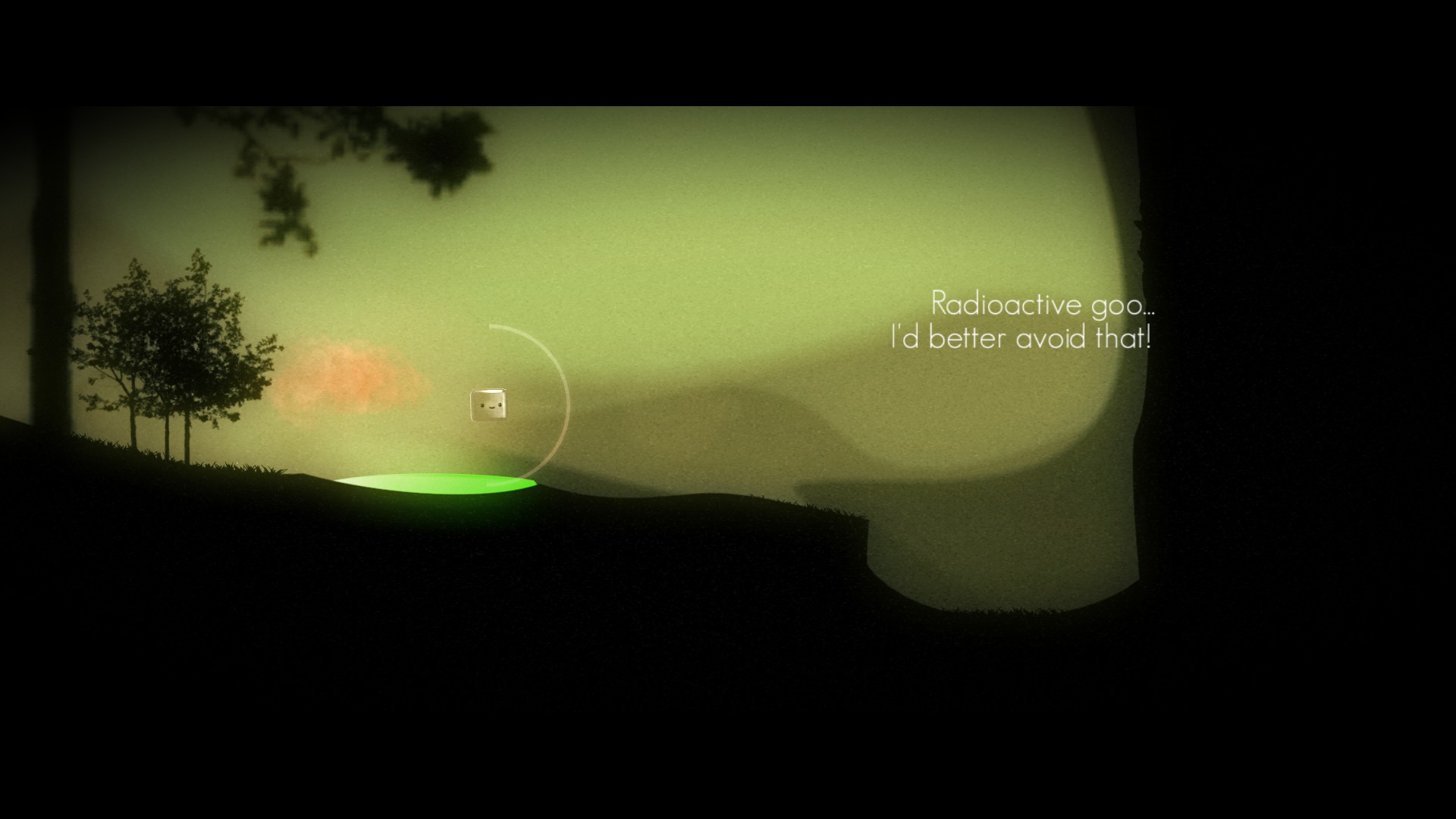 See! He says that. Didn’t we say he said that?

Don’t worry if you suck at video games though because Element4l is here for you with a set of training wheels in the form of the ‘this is too hard for me’ option in the menu. This mode increases the number of checkpoints throughout each level as well as increasing the rate of energy recharge. Whilst we’re on the subject of other modes, there is also a race mode where you can replay levels you’ve beaten to try and improve upon your time and beat your friend’s ghost times. It adds an extra level of replayability to the game as you constantly strive for perfection.

Graphically, Element4l is very minimalistic with black silhouetted environments very reminiscent of Limbo. However unlike Limbo, Element4l throws in splashes of colour in the form of glowing orange lava and sickly green radioactive goo. The skybox (if you can call it that in a 2D game) is also somewhat more colourful than the foreground, giving off a very natural feel which suits the game’s themes perfectly. These backgrounds change depending on the area you’re in but they are always presented beautifully and subtly, never cluttering the screen. The four elements are presented nicely, each with a cute little cartoony face to give them a little character. 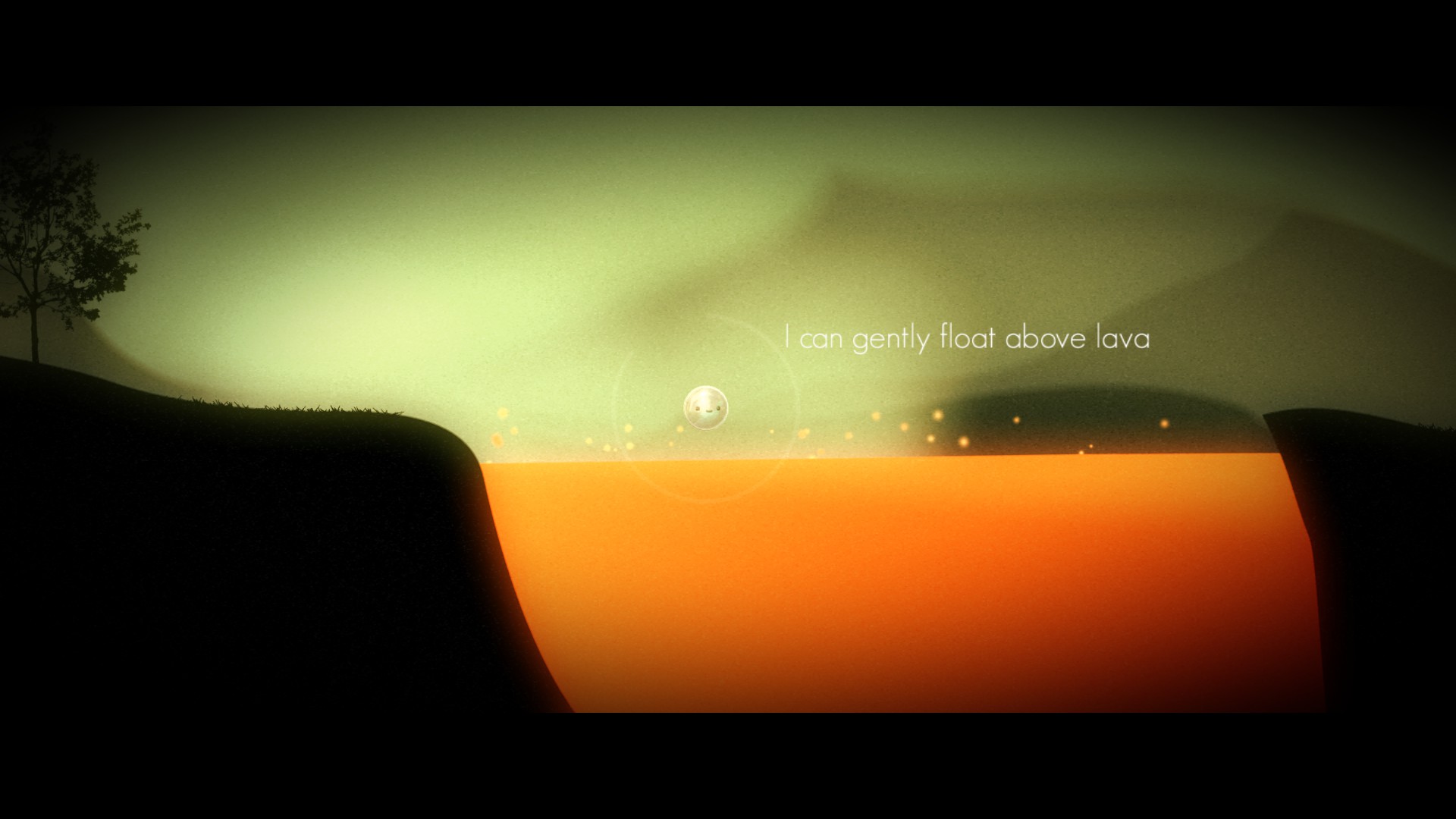 He’s not lying, but don’t hang or he’ll soon start to feel the heat.

Accompanying these striking visuals is an equally impressive soundtrack, scored by Mind Tree. The songs are varied enough and yet always flow into each other perfectly, mixing soft electronic tunes with hints of instrumental music and even dubstep in places. If you get fed up of Element4l defeating you but still want to listen to its soothing tones then we have good news for you, as every copy of the game comes with a copy of the soundtrack too. In addition to the soundtrack, there are also some nifty sound effects for each element and it’s interactions with the environment, whether that be sliding down a hill as the ice block or flying through the air as the fireball.

Element4l is a cracking indie platformer and does more than enough to rise to the top of a pretty heavily saturated genre. It starts off pretty easy but you’ll soon be cursing the developer’s family once you get a few levels in. Some gamers may find the challenge more frustrating than rewarding but there is always the ‘this is too hard for me’ option for the casual players out there. Combine this addictive gameplay with the game’s beautiful artistic style and stellar soundtrack and this could be one of the indie smashes of the year.