Dragon’s Dogma is a fantasy RPG title by Capcom which originally released for the Playstation 3 and Xbox 360 back in 2012. It was fairly well-received in reviews and amassed a cult following from fans due to the interesting Eastern take on Western Fantasy genre conventions and tropes, borrowing ideas from popular fantasy titles such as Lord of the Rings and also mythological creatures from traditional mythology. Four years have passed and now we finally see Dragon’s Dogma making a triumphant return on the PC platform.

As this game is fairly aged and part of the previous generation of titles, it may come as no surprise to you that Dragon’s Dogma runs on even aged PCs incredibly well. I was playing this title on a PC using the NVIDIA GTX 660 graphics card and an AMD 8120 processor (a processor which has since been removed from the market due to overheating and performance issues) and I was able to play with nearly all setting on high with a smooth frame rate of 60, dropping to as low as 45 in intense situations. As this is a port of Dragon’s Dogma: Dark Arisen, if you have played the game previously and are expecting brand new content, you can give this port a miss really.

The game also boasts plenty of graphical options for the PC.

In Dragon’s Dogma you take on the role of the Arisen, one who has had their heart stolen by a Dragon and must go on an epic quest throughout the land in order to track it down, slay it and retrieve the heart. It’s not a story that will win any narrative awards or even a story that a player will actively remember whilst playing the game, but the stories’ simplicity plays a good role in doing what an RPG tends to do; providing a limited start before opening up the world for the player to explore.

Dragon’s Dogma works on via a traditional class system which you’ll be familiar with if you’re fairly familiar with RPGs. When you design your character, alongside altering their physical appearance, you also choose your starter class from the usual triangle of magic, melee and ranged skills. In the beginning of the story you can choose between three: Fighter, Mage and Strider. The fighter is the basic class for the heavily armoured, melee focused warrior character that grants the Arisen defence bonuses and also far more health than any other classes. The mage is pretty much what you would expect, a magic user. Instead of jumping into the heat of battle, the mage will stand on the outskirts and support the team with either elemental attacks or healing spells. The Strider is Dragon’s Dogma’s equivalent of the rogue class, using light armour, daggers and bows to deal damage. It’s a good mid-ground between the tank-like approach of a fighter and the passive approach of the mage.

Later in the game the class system expands, allowing you to change your class to either an advanced class or even a hybrid of two classes. Advanced classes remain similar to the basic classes, but focus further on heavy attacks. For example: changing the class from a Fighter to a Warrior allows the character to deal more damage with the use of two handed weapons rather than simply using a sword and shield.

Hybrid classes are what makes the game feel more unique, by combining two classes to make a completely new class. For example, if a player creates a character that is originally a Strider, they can upgrade that Strider to become a Magick Archer who will then have the ability to use staves and also fire magical arrows rather than just standard projectiles. These advanced and Hybrid classes add a new level of depth to the character customisation in Dragon’s Dogma, it also allows you to experiment with the team you take with you on your journey, simply by changing and swapping the classes. 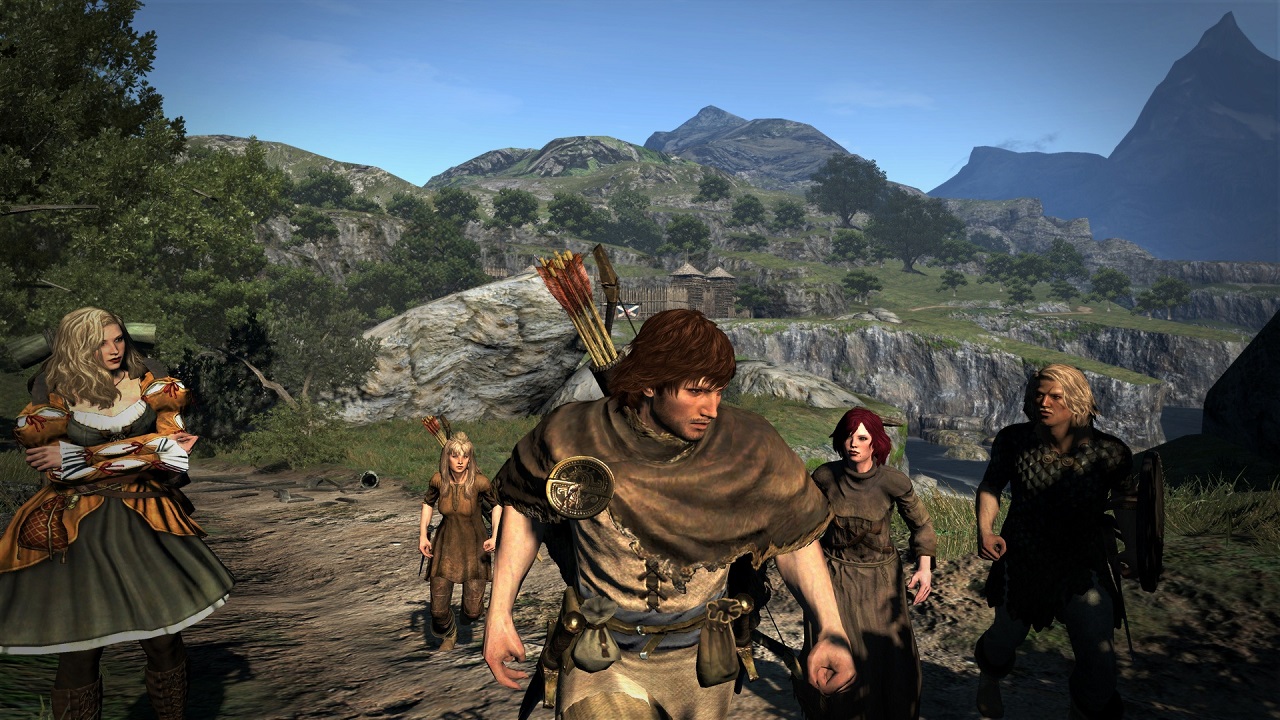 This can be a lot to take in, but it is an RPG, this genre tends be very heavy on the customisation and stats in order to make the character feel unique to the player. The game doesn’t stop this customisation at just the character you play as, they also have made an ally system where you can create your own companion who will stay by your side throughout the game; enter the pawn system.

Pawns are creatures that appear human, though they lack emotion and have just one goal; to assist the Arisen however they can. The pawn system allows the player to make a companion, one preferably that works well with the class they originally chose. For example: if the player made their Arisen a mage, their pawn should probably be a warrior. As well as creating a pawn of your own, you can also summon pawns from other people’s games and use them in your journey. By sending out your pawn into this online community, they can level up whilst you’re not playing and also come back with gifts in hand from other players who may have appreciated your pawn’s company. It adds a form of online community as well as a neat meta-game into the world of Dragon’s Dogma.

As mentioned previously, Dragon’s Dogma takes huge influences from western fantasy as well as forms of mythology, meaning we get some absolutely fantastic creatures for the Arisen to slay. From the smallest of goblins to the most fearsome of Chimeras, each monster is beautifully detailed and visually intimidating and rightly so. Dragon’s Dogma doesn’t make these fights easy for players however. Monsters have multiple health bars and deal heavy amounts of damage if you find yourself in its path for too long. These creatures are why Dragon’s Dogma can stand out from other fantasy RPGs, unless you are well equipped and have a balanced team of allies, you will find yourself struggling with these fights.

The fights with these fearsome creatures is only improved by the fantastic combat system in Dragon’s Dogma. I can only describe the combat as a perfect mix of Dark Souls and Shadow of the Colossus. You have two basic attacks, a light and a heavy attack, as well as an array of bow attacks and special attacks the character can use depending on the class they choose. Jumping into a fight swinging your weapon willy-nilly will only result in a very swift death for the Arisen, meaning every attack and every approach would need to be planned effectively for it to work. Similar to how one would play any of the Dark Souls games, but the combat is also mixed with the ability to climb onto the monsters and cling onto them for dear life, this puts the monsters in a vulnerable position where the Arisen can get in a few easy hits.

Though Dragon’s Dogma is not perfect, like many games before it, it does have a fair share of issues. The biggest issue for Dragon’s Dogma is the world, in terms of scale it is a massive world but it also feels incredibly barren. There is no mention of the world being destroyed but by walking through the many empty fields and open spaces of nothingness it wouldn’t be a difficult thing to believe. Basically, the world feels like it lacks some form of character, the NPCs you may bump into on your way to and fro will very rarely have anything important to offer and will most likely tell you a useless fact.

That’s another issue, the voice work. Capcom have never really been a company to have fantastic voice acting, we’ve all heard the hammy works of Resident Evil (Jill sandwich, anyone?), and that hasn’t stopped here, most of the voice cast do sound like they were walking by past Capcom when they were unexpectedly grabbed and dropped into a recording booth and spoke each line with a level uncertainly and an element of fear.

Quests can also be a bit cluttered, Dragon’s Dogma has the nasty habit of not telling you the difficulty of a quest you are about to embark on, which means the Arisen could travel across the world to reach the quest destination only be completely destroyed at the first sight of an enemy, meaning a lot of time was wasted on something the player cannot do yet.

Dragon’s Dogma is still the RPG title I fell in love with those many years ago, but with a beautiful PC lick of paint that visually improves the game and removes the horrible technical issues that plagued the console version. If you haven’t played Dragon’s Dogma before, pick up the PC version and if you can ignore some the faults in this game, then you may find yourself a flawed gem of a title.

Dragon's Dogma is still the same fantastic title it was back in 2012, though the PC version shows the game's age more clearly than the console counterpart.