Almost a year after we first skulked through the streets of Dunwall, the final piece to 2012’s fantasy stealth adventure has arrived. Following on from April’s “The Knife of Dunwall”, the regicidal assassin Daud returns for a second time to finish his quest for absolution. Does this six hour slice of whalepunk cap off the Dishonored experience or does it thrust itself upon its own blade?

Taking place shortly after the events of The Knife of Dunwall, the Overseer’s have invaded the flooded district and the betrayal of Billy Lurk is fresh on Daud’s mind. Having unravelled the Outsider’s riddle over the name Delilah, he goes on the counter-offensive against the leader of the Brigmore witch coven. Across three more missions, The Brigmore Witches is the same length as the previous DLC and brings Daud’s tale to a close when he faces off against Corvo, but what does fate have in store for the assassin?

Dishonored’s strength has never lied with the complexity of the story or characters. The original narrative was formulaic with a painfully predictable “twist”, and a star-studded cast voicing a menagerie of ragamuffins and turncoats. It did the job, but it failed to have that wow factor past the well-constructed script. What it did however was nail the setting and flesh out the world extremely well. Books, audio diaries and conversations between NPC’s detailed every facet of the Empire and the characters who inhabited it. For many this was enough to fall in love with the world and forgive the fact that these written details did more to flesh out the characters than anything the main story did. The Brigmore Witches continues this tradition, with details scattered around the three missions trickling extra details about Delilah and her past. Not enough time is spent with any of the new characters to have them seem interesting, especially the villain Delilah. Like The Knife of Dunwall, we take on faith that she is evil because we are told she is, rather than anything else.

Not Quite The Wicked Witch Of The West, But Close Enough

Taking place alongside Corvo’s series of missions, Brigmore Witches begins by going full circle, with Daud invading Coldridge prison shortly after Corvo’s supernatural escape. Sadly it puts Dishonored on its weakest footing. Coldridge is a small, visually uninteresting area that isn’t expanded on much from the first visit. With no alternate objectives or targets to kill in creative ways it is limited by its design, with a pure infiltrate, extract objective it is over quickly and doesn’t leave much of an impression.

The second, much larger level takes place across three environments. Putting you in one of Dunwall’s more well off areas ruined by plague and gang war, a long chain of objectives covers at least half of the overall playtime. Two or so hours in length, it is a microcosm of Dishonored’s world. From docks to factories, from thugs with pretensions of class, and upper-class dandies who are more cruel than those they consider beneath them, the time spent on this mission distils everything down to what makes Dishonored good. Areas and objectives that can be approached in multiple ways that rewards exploration and experimentation reign supreme. While these areas lack the intrigue of the Whale slaughterhouse or Dunwall Tower, it is another chance to explore and interact with a new part of the Dunwall.

Punk Is Not Dead, It Just Got Weirder

The downside to this is how the game justifies sending Daud back and forth across the district. Having to perform tasks for two gang leaders to gain access to a ship, you run back and forth to either kill or gather something or someone before you can move on. For a world that treats Daud and his group like the ultimate assassin’s, the game makes them feel more like errant lapdogs to be ordered around. Even prisoners dare to mock the man feared for being the most talented blade in the known world.

The third and final level is the end of the road for Dishonored, or at least until a sequel is announced. The flooded Brigmore estate houses Delilah and her thrall of loyal followers. Taking place outside of the quarantine perimeter around Dunwall, it is visually refreshing. Reclaimed by nature and partially flooded, the mansion and its grounds are a stark contrast to the brown and grey streets we have previously seen before. It is wondrously atmospheric, with the whispers of the new witch enemies and their hellhounds roaring at their heels coming from between the bushes.

Being the final challenge, it lives up to the expectations the story builds it up as. Covering both open terrain and the claustrophobic halls of the manor test everything up you have learned. Teleporting witches and nearly unkillable hellhounds are placed in fiendishly difficult layouts to provide one last obstacle to overcome. Once again though, it is let-down by it’s own design. Dishonored’s simple combat mechanics prevent the final confrontation from being anything other than a let down. Without spoiling the last moments, it fails top provide any sense of closure, or present much of a redemption we are told we have earned. 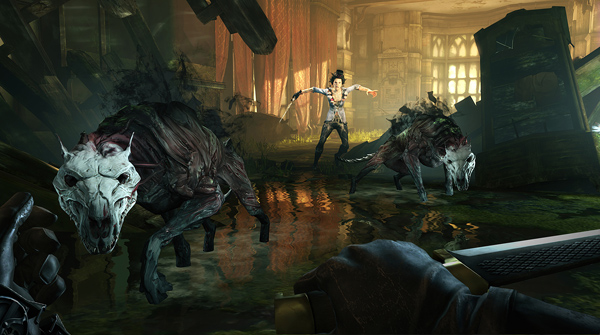 The DLC also adds a few minor changes to the formula. Disguises take a minor role, allowing free access to a few choice areas if you behave yourself. Corrupt charms also appear, offering more interesting buffs at a slight cost, making an otherwise simple choice an interesting case of risk and reward. These changes are rather small additions, but are welcome due adding a little extra variety to the usual flow.

The Brigmore Witches is easily worth the £7.99/$9.99, in spite of its flaws. Even though the game holds all of the originals issues, as well as making a few of its own, the quality of the overall package makes for a great piece of DLC. Rightfully feeling like a side-story to the originals tale of betrayal and revenge, Daud’s adventure offers a new slant from the point of view of a man who nearly destroyed an empire with one flick of the blade.